Are you looking for a unique location to take in the holiday lights and décor of downtown Lancaster this December? If so, look skyward! Perched atop the 12th floor of the Lancaster Marriott at Penn Square’s East Tower, The Exchange provides stunning views of downtown Lancaster, especially by night. 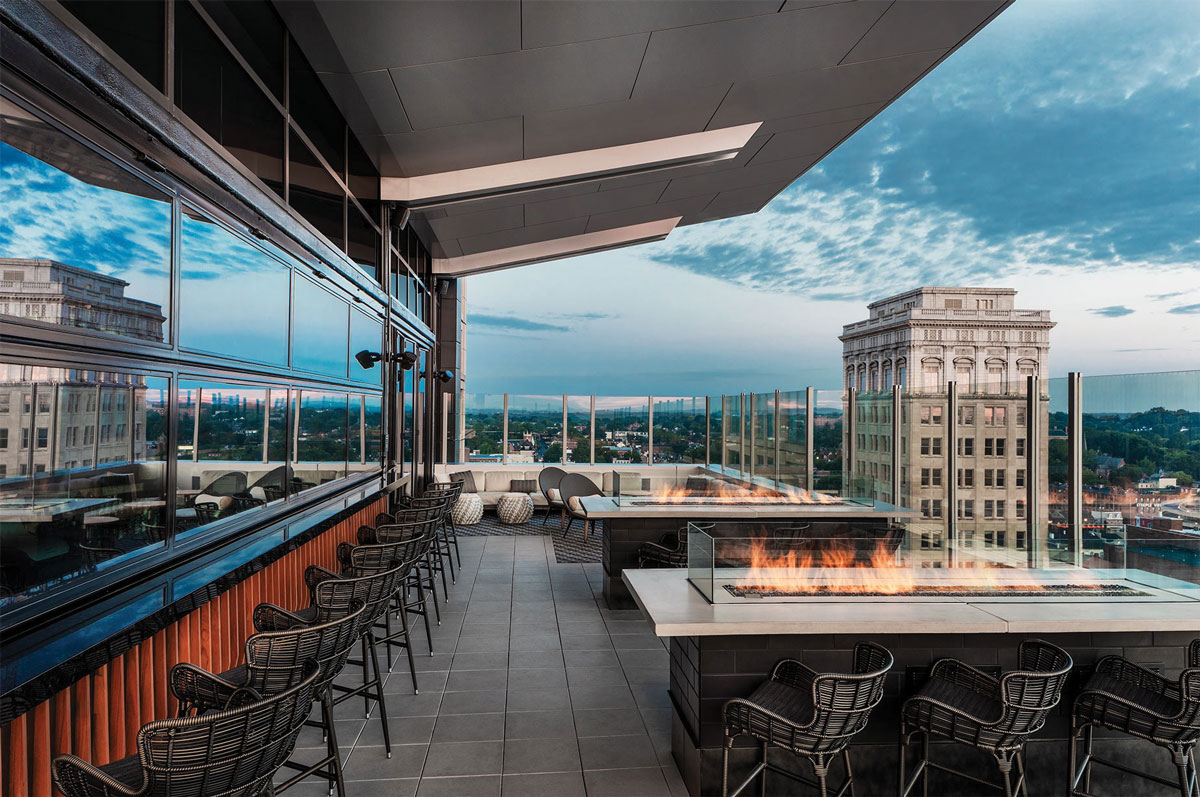 Panoramic views of the city are on the menu at The Exchange.

Offering year-round indoor and outdoor dining, The Exchange opened in July 2019. Indoors, floor-to-ceiling windows offer panoramic views of the city. “People like to walk around and check out the views,” says Ryan McQuillan, executive chef for both The Exchange and Plough, the Marriott’s new ground-level restaurant.

The décor’s modern flair entails a mix of casual seating and low cocktail-type tables. Ryan says guests often gravitate to a low white banquette in the center of the room that’s positioned under a large lighting fixture. He also shares that guests like to watch food being prepared in the display kitchen that features a wood-fired oven.

Outdoors, there are three large high-top tables with integrated fire pits, as well as several casual seating areas. Patio heaters are in place to ward off the chill. Accordion patio doors, which provide access from indoors, fold back to create a seamless indoor-outdoor area in warmer months. The indoor bar is double-sided and opens onto the terrace, as well. 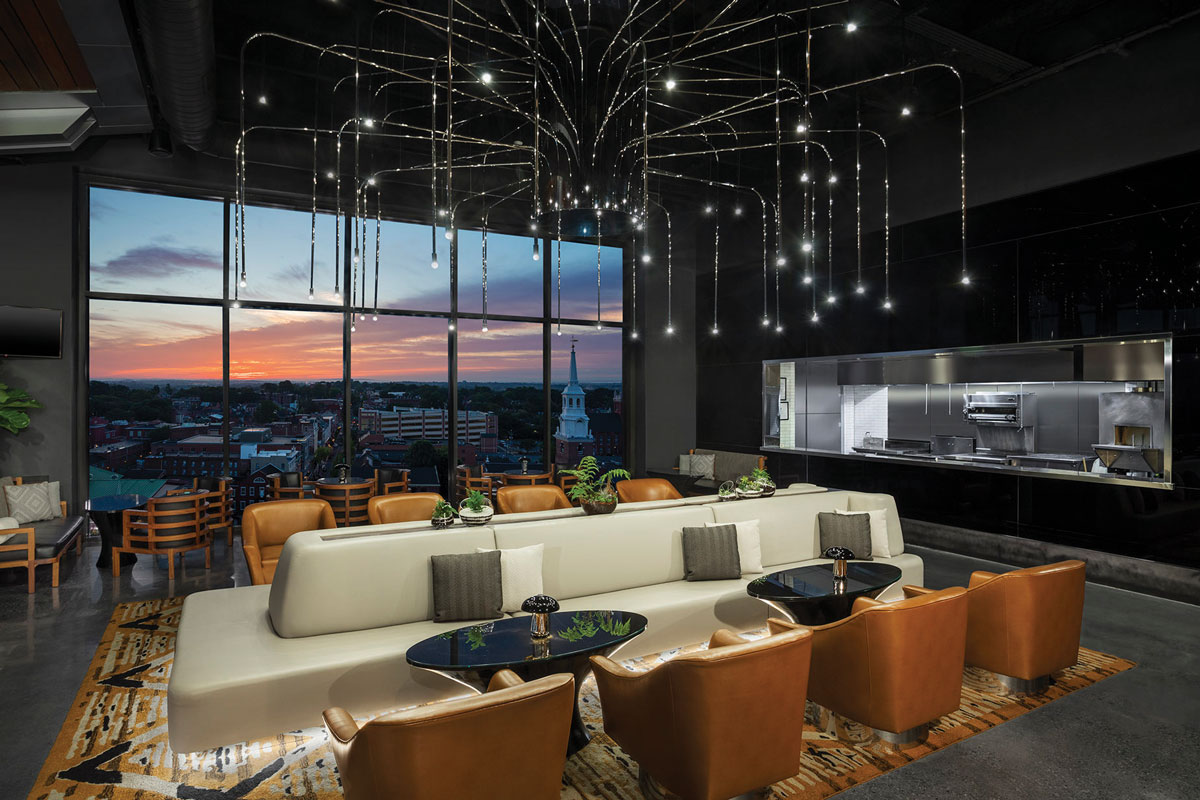 The décor – inside and out – is modern and inviting.

In order to comply with health and safety regulations related to COVID-19, indoor seating is currently not available. Previously, seating capacity for each space had been set at 30.

Ryan, who is a Pennsylvania native and a 2009 graduate of The Restaurant School at Walnut Hill College, began working in restaurant kitchens as a high school student. His resumé includes such renowned restaurants as Le Bec-Fin (under chef George Perrier), 10 Arts Bistro and Mercato BYOB, a winner of a “Best of Philly” award from Philadelphia Magazine. During his tenure as the head chef at Talula’s Table in Kennett Square, the restaurant was named “the toughest reservation in the U.S.” by Conde Nast Traveler, plus it received a coveted four-bells rating from The Philadelphia Inquirer. Additionally, Porch & Proper (Collingswood, New Jersey) received a 3-star rating from Philadelphia Magazine during his time there. 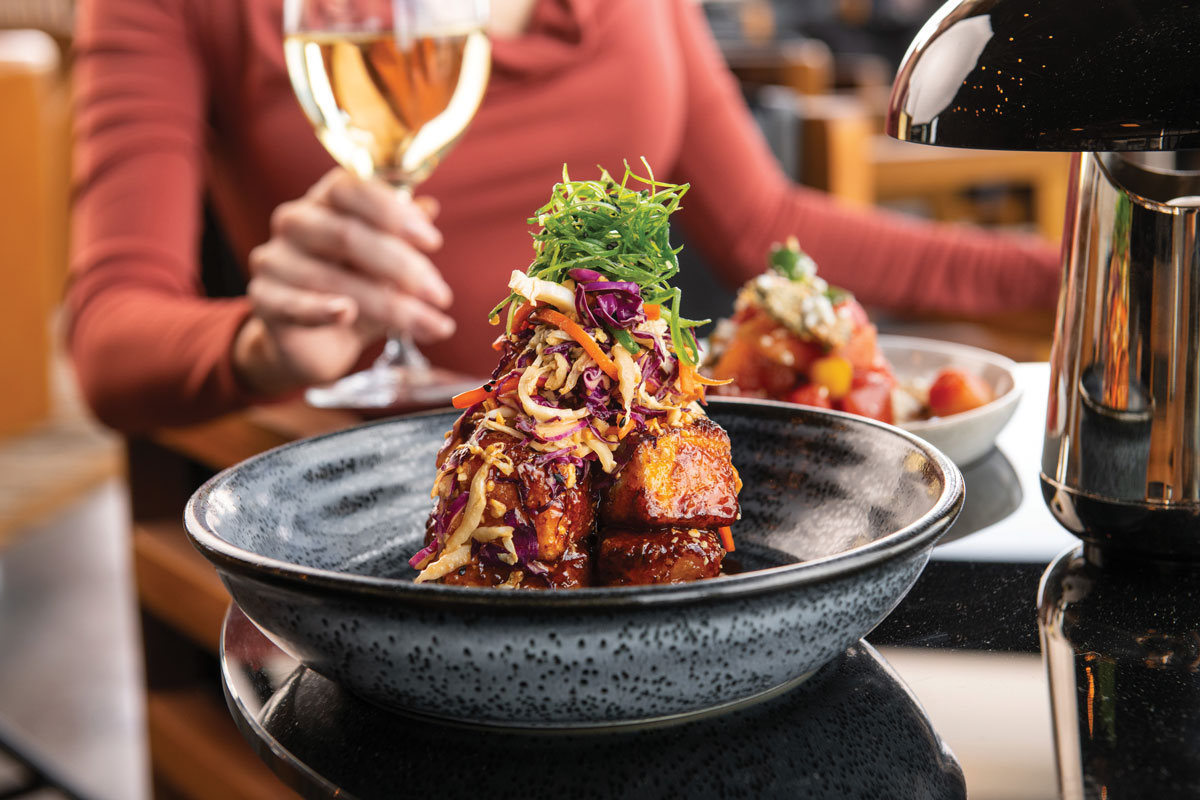 Crispy tofu is on the Exchangeable small-plate menu.

He describes The Exchange’s menu as “casually styled, locally inspired comfort food.” Fresh, locally sourced produce is showcased. “We work with local farms such as The Field’s Edge Research Farm in Lititz and Rineer Family Farms in Pequea, so the menu changes seasonally to take advantage of what’s in-season,” he explains.

The fall/winter menu features items such as squash, root vegetables and braised meats. Ryan notes that the menu has shifted a bit since the COVID-19 pandemic. Pre-COVID-19, the offerings focused more on small plates. Now, there are more entrées. In a nod to both technology and COVID-19, the menu can be accessed with a smartphone by scanning the QR code placed on the table.

Popular items include pork and duck meatballs made in-house and served with a house-made smoked diablo sauce and parmesan bread baked in the wood-fired oven. Another favorite is chicken nuggets and crispy Brussels sprouts, which are served at both The Exchange and Plough and are only offered on the fall/winter menu. Entrées include short ribs poutine, spicy crab bucatini, a wood-fired steak and a burger made from aged prime beef.

The Exchange is also known for its margherita pizza, which like other pizzas on the menu is baked in the wood-fired oven. “I consider the margherita pizza our signature item. It’s made with a Neapolitan-style dough, which uses only four ingredients – flour, salt, water and yeast. It’s cooked at a high temperature in the wood-fired oven so there’s a nicely done crust,” Ryan explains. 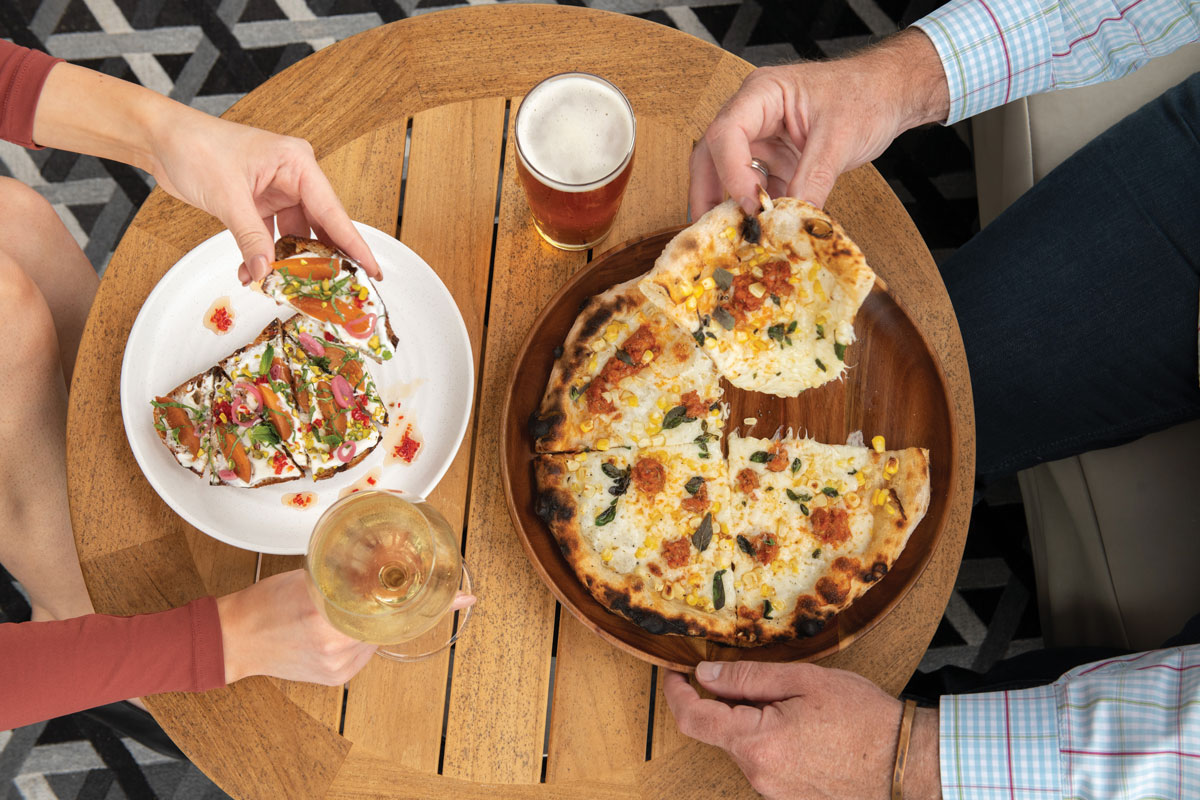 Menu items are augmented by one or two daily features, which are posted on The Exchange’s Facebook page. He says daily features are a way of testing out new items for possible inclusion in the menu.

The selection of cocktails, wines and beer only adds to the allure of The Exchange, where Mood Swing is the signature drink and Autumn Sangria is a seasonal favorite. The mixologists can also create custom cocktails. The bar’s six taps feature craft beer from local breweries including St. Boniface and Troegs. Stella Artois and a craft-brewed hard cider are also on tap. Wine is procured from as nearby as Chester County to as far away as California, Argentina, Spain, Italy and Australia.

The Exchange is also available for private events such as wedding brunches and business parties. FYI: With Christmas and Valentine’s on the horizon, anyone entertaining the idea of popping the question might make a mental note that The Exchange has become one of Lancaster’s favorite and most scenic spots to propose. 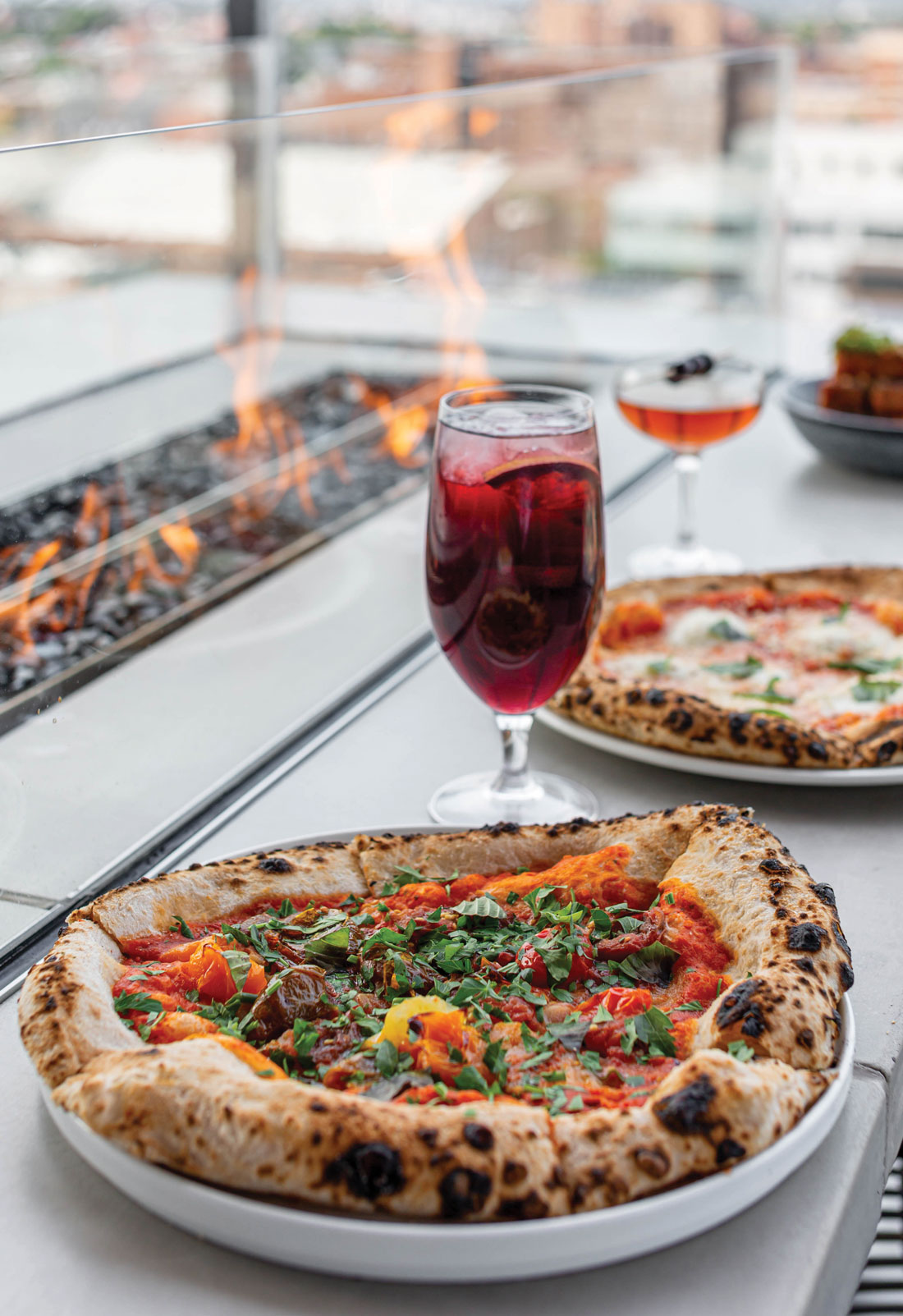 The Exchange is located atop the East Tower of Lancaster Marriott at Penn Square, 25 South Queen Street, Lancaster.

Temporary Hours from December 12 to January 4: Sunday through Thursday, 12-10 p.m. Friday and Saturday, 12-11 p.m. They will be open for take-out only on Christmas.

Panoramic views of the city are on the menu at The Exchange.