Like every other business you can name, farming has been impacted by the coronavirus pandemic. And, like other business owners, Steve and Seth Hershey, who oversee a 120-acre farm in East Donegal Township, have been trying to both roll with the changes that now define the new normal and make plans for the future. 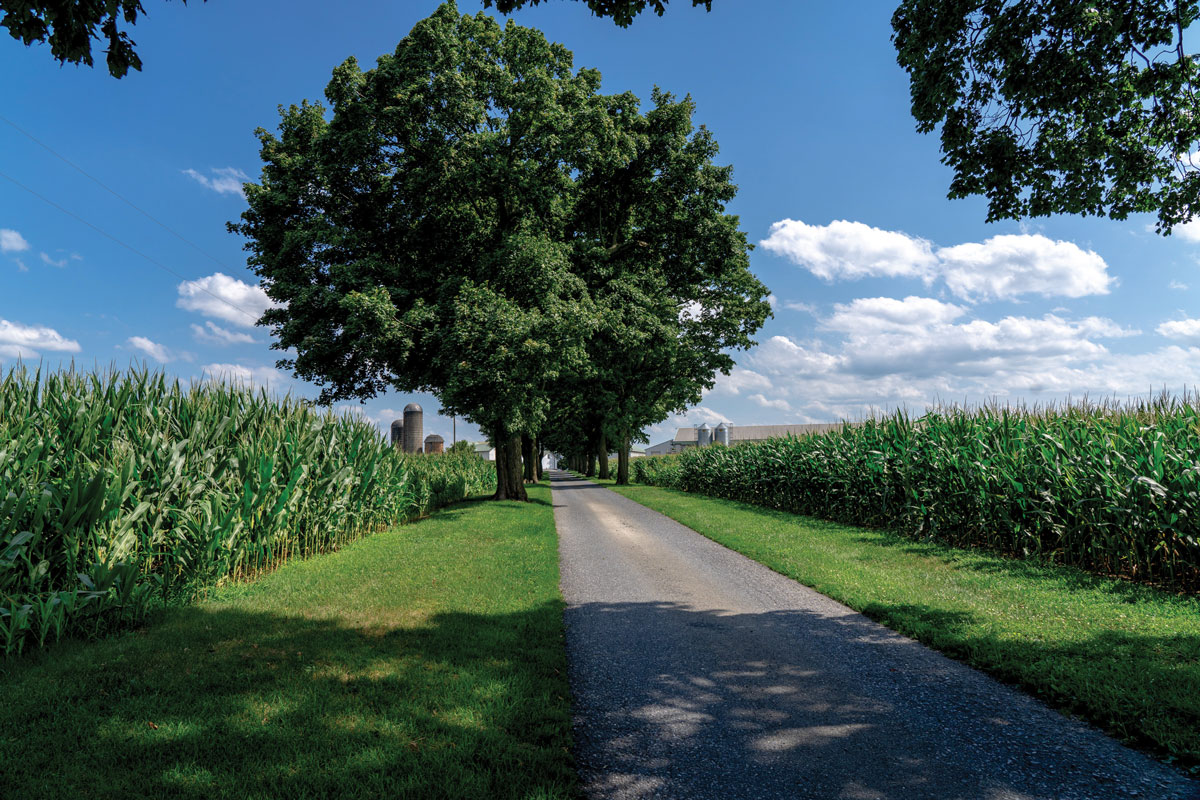 Drive across Donegal Springs Road in Mount Joy and you’ll notice two things: corn and maple trees. The Hershey Farm, which was once owned by Simon Cameron, has been in the Hershey family for four generations.

Drive on the backroads between routes 283 and 441 in East and West Donegal townships and you’ll notice two things: Corn as far as the eye can see and the maple trees that line Donegal Springs Road and the farm lanes that exit off of it. The area is not only rich in farmland but also in history.

Long before William Penn arrived, trails used by Native Americans and traders crisscrossed the area. By the early 1700s, Scottish Irish immigrants in search of religious freedom began settling the area. In 1732, Donegal Presbyterian Church was built on a 200-acre tract that was part of the Penn land grant. The Presbytery of Donegal’s territory extended as far west “as settlers cared to go.” 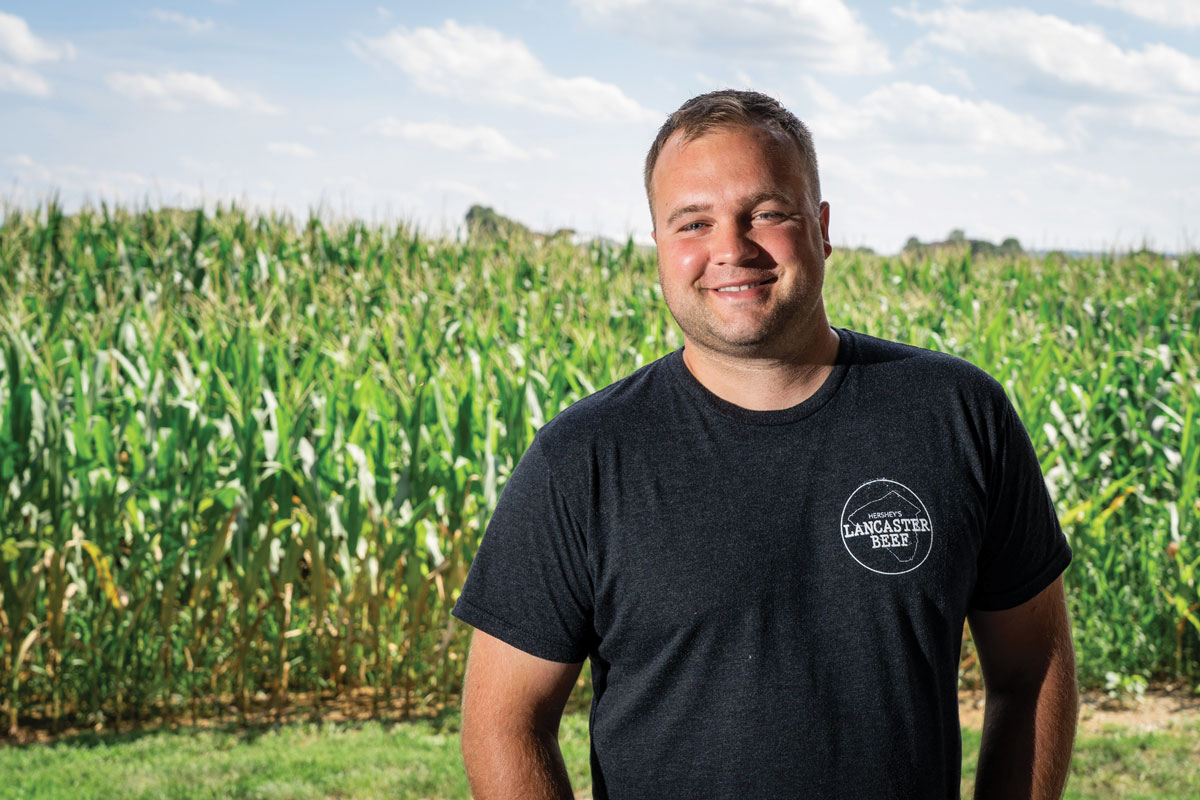 Six years later, James Stephenson was granted a 314-acre tract in the vicinity of the church. The tract stayed in the Stephenson and Watson families (a Stephenson daughter married into the Watson family) until 1872, when Simon Cameron – who served multiple terms in the United States Senate and was Abraham Lincoln’s Secretary of War for a time – purchased it to serve as one of his summer homes. The farmhouse, which dates to 1805, was once regarded as the largest brick structure on the western frontier. Today, it’s known as Cameron Estate Inn.

Cameron also began buying up the farms along Donegal Springs Road that served as glebes – acreage set aside to financially support the church. “I think he owned nine farms in the area,” Seth notes.

As for the proliferation of maple trees, legend has it that Cameron had learned of a bill that was slated to be introduced in Harrisburg to encourage farmers to beautify the state’s roadways by planting trees along them. For each tree that was planted, the farmer would be reimbursed $2. Cameron planted thousands along Donegal Springs Road and even along the farm lanes he owned. It seems he missed a key point – the trees had to be located within fence lines. 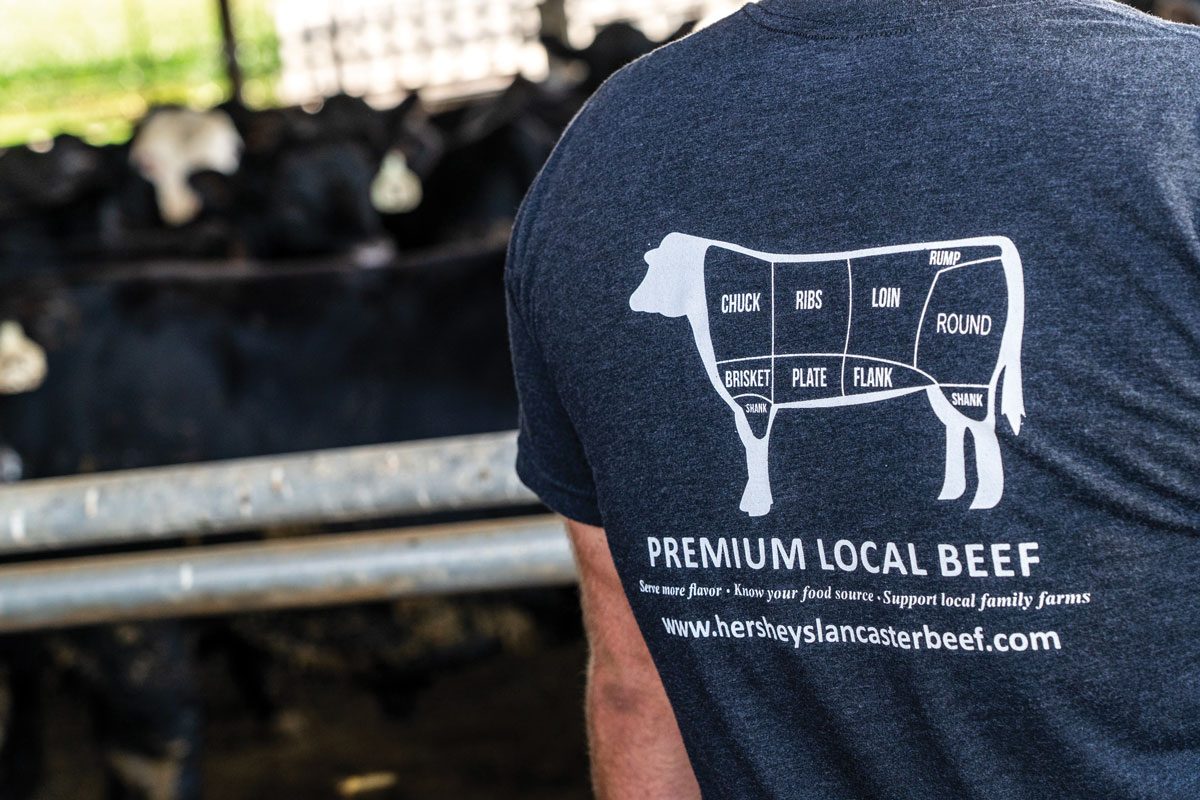 Five years ago, Seth and Kelsey introduced a new venture to the farm – a local beef brand called Hershey’s Lancaster Beef. They launched the business by selling quarters of beef and eventually began to supply restaurants in Lancaster, Philadelphia and New York with product. Because of Covid, they are back to selling quarters and are exploring other avenues, including grocery stores.

The Hershey Farm, which according to the date stone on the house is 150 years old and whose lane is lined with maple trees, was one of the glebes that Cameron owned. Seth’s great-grandfather eventually came to own the farm. The Hersheys have always raised crops such as barley, wheat, soybeans and corn and maintained a chicken (pullets) operation. Seth’s area of focus is beef cattle – primarily Black Angus – which is marketed as Hershey’s Lancaster Beef.

Seth grew up in the house he and his family – wife, Kelsey, and daughters Hadlee, Charlotte and Molly – now call home. “We all traded houses over the last year,” he says, explaining his grandparents, Harry and Joan, moved to Brethren Village, and his parents, Steve and Patty, in turn, took over the elder Hersheys’ ranch-style home. Seth and Kelsey, who grew up on a farm on Milton Grove Road in Mount Joy, and their daughters traded their townhouse in Maytown for the large farmhouse. 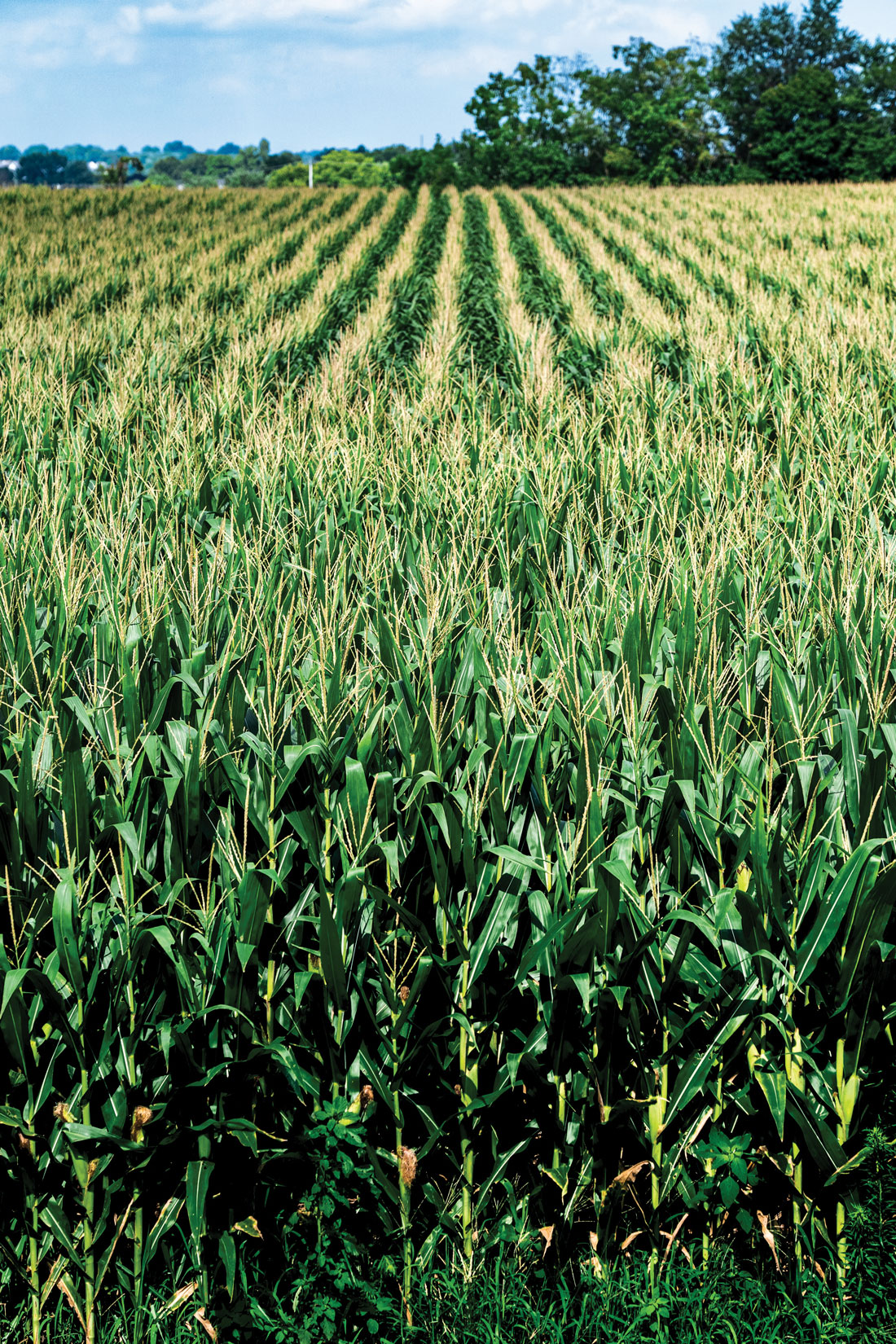 Corn is a mainstay of the farm.

Growing up, Seth always enjoyed farm life but was not involved in 4-H and other agricultural organizations. “Sports were my interest, especially basketball and baseball,” he says. He wasn’t even sure if farming was his career choice. “I contemplated trade school,” says the Donegal alum. He ultimately headed west and spent a year at Ravencrest, a Bible college in Estes Park, Colorado.

As beautiful as Colorado is, he missed everything about home – “seeing crops grow, family life and the work ethic” that living on a farm entails. So, he came home, worked on the farm and drove truck for three years. He met Kelsey through youth group. They’ve been married for seven years. 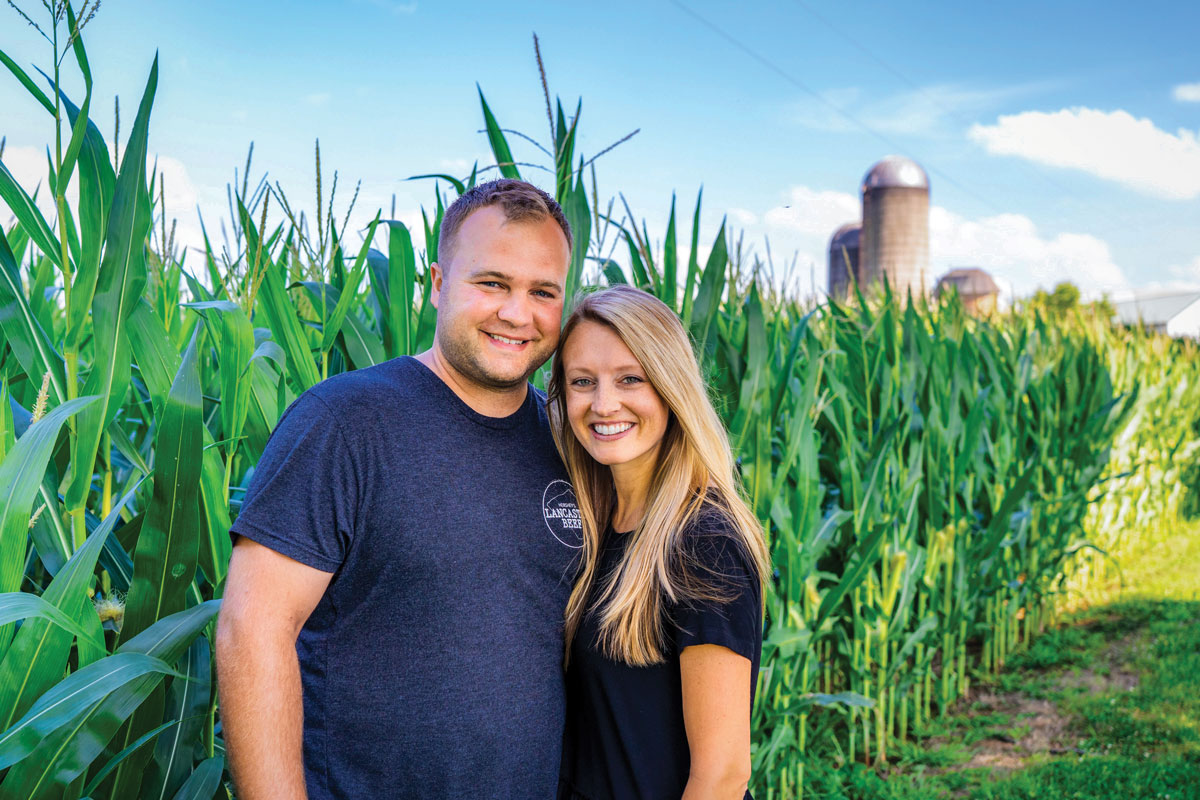 Seth and Kelsey, who met through church youth group, have been married for seven years.

Seth and Kelsey launched their beef brand (Hershey’s Lancaster Beef) in 2015. “As a family farm, we’ve been producing beef for many years,” Seth explains. “The beef brand is the new part.” Today, the farm is home to 500 steers (another 700 are kept at a neighboring farm, Pleasant View Beef Farms) that begin life by eating grass on farms in Virginia and West Virginia. They then make their way to the Hershey Farm, where they are switched to a diet of corn, corn silage and grain. When they arrive, they weigh approximately 850 pounds and eat their way to 1,350 pounds over a period of four to five months.

Seth, who began his venture by marketing quarters of beef, gained a devoted following. “People like to know where their food comes from and who the farmer is,” he says. From there, he upped the ante and began working with a company that made his products available to restaurants in Lancaster, Philadelphia and New York. 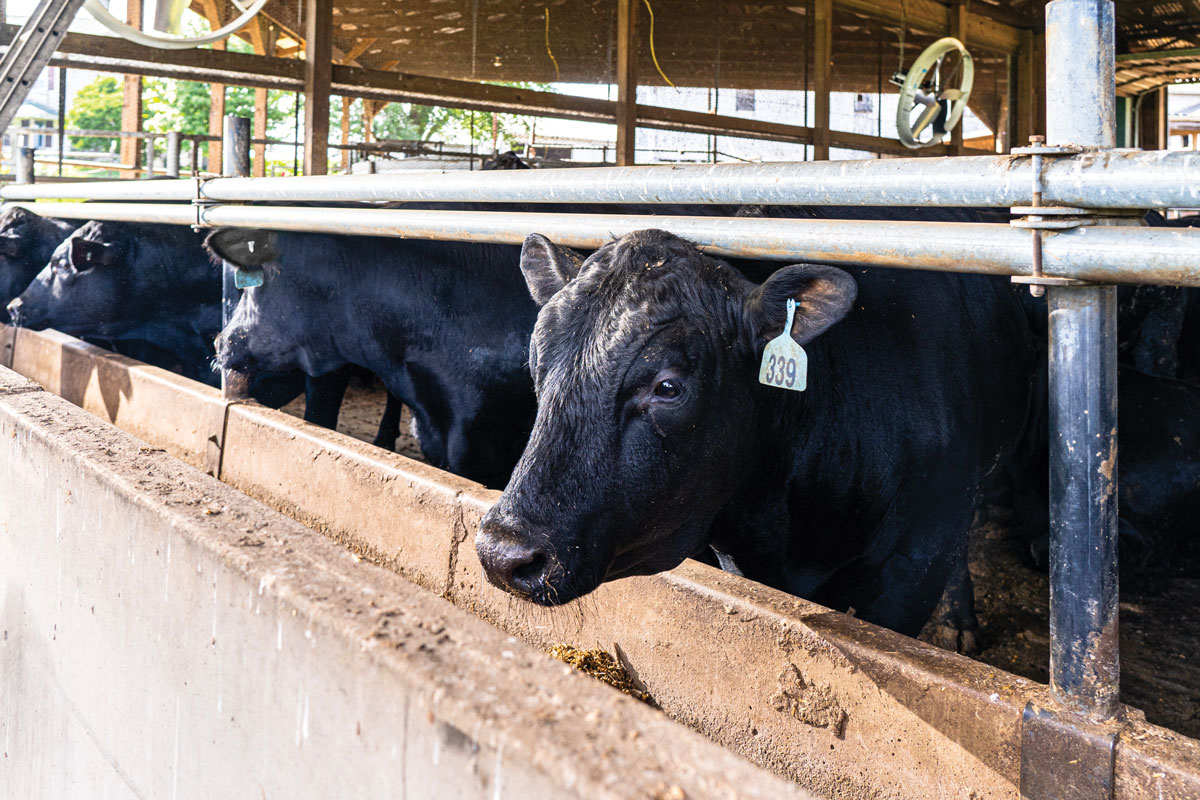 The farm specializes in Black Angus steers that begin life on farms in Virginia and West Virginia, where their diet is predominately grass. Once they arrive at the Hershey Farm, their diet makes the transition to corn, silage and grain.

Then, of course, it all came crashing down with the arrival of COVID-19. With restaurants closed, the demand for Hershey’s Lancaster Beef came to a halt. He can’t help but to think back to a time not so long ago, when 50 chefs visited the farm for an educational and dining event. He shrugs, as if to say, “What are you going to do?”

In March and April, farmers such as Seth faced a crossroads. “Suddenly, the commodity prices decreased from $1.20 to 90 cents live weight. That’s a lot to lose – like $300 to $400 per steer,” he explains. “You can only hang on for so long and then you really begin to lose money, so you bite the bullet and sell.” Subsequently, the processing plants were being hit hard by COVID-19. Some were forced to close for quarantine purposes. While there was plenty of product available, processing it was problematic. Shortages began to occur in grocery stores. Prices climbed. “Somebody was making money,” Seth observes. “And, it wasn’t the farmer.” 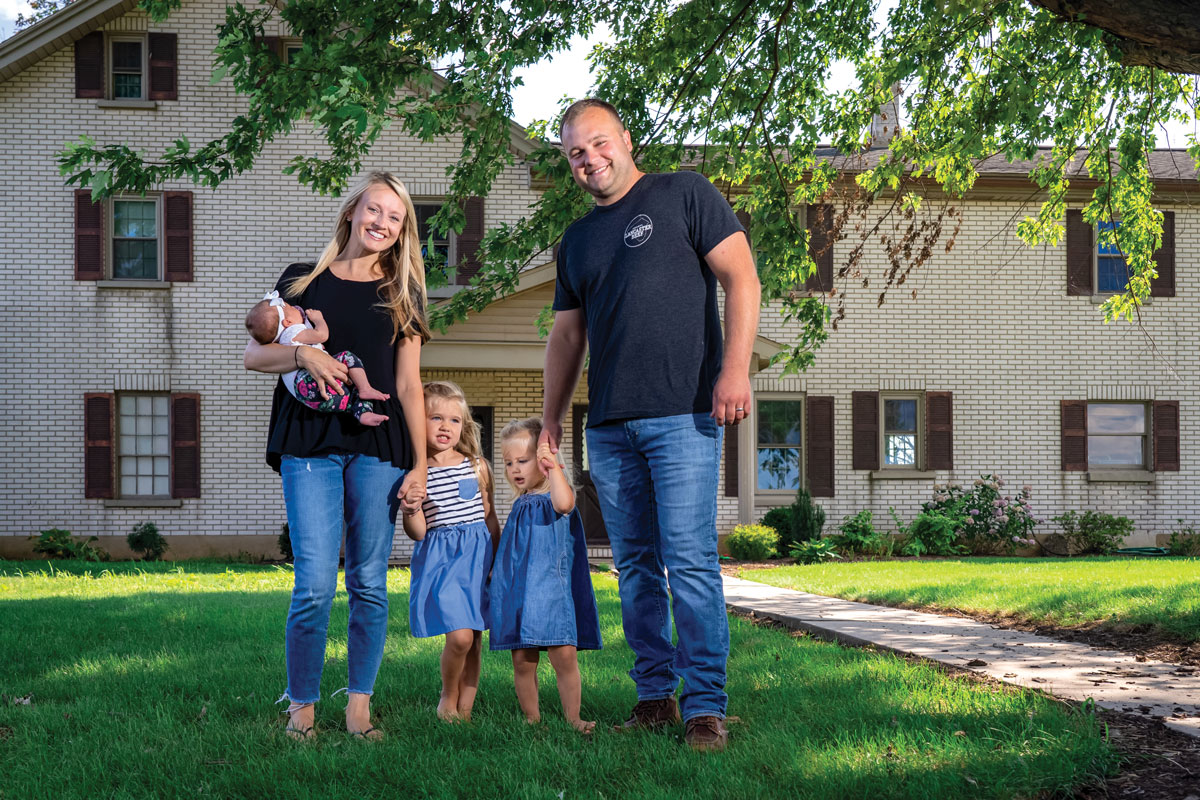 Seth and Kelsey and their daughters, Molly, Hadlee and Charlotte, now live in the 150-year-old farmhouse.

Seth retains his positive outlook and keeps his vision for Hershey’s Lancaster Beef focused on the future. (The farm is certified by Beef Quality Assurance and is registered as PA Preferred.) He thinks his venture has promising days ahead. “Today, there’s even more of an emphasis on Buy Local,” he says. “And, people are finding us. We’re back to selling quarters of beef – we’ve probably sold about 50 head of steers through selling quarters to families as of early July.” (Processing is handled by a local USDA-certified butcher.) Social media (Facebook) is used to announce short-term specials that might entail a quantity of ground beef and a selection of steaks. He would love to find a way to get Boxed Beef products into local grocery stores. ‘We’re working on that,” he assures. “I think we’re close to making that happen.” 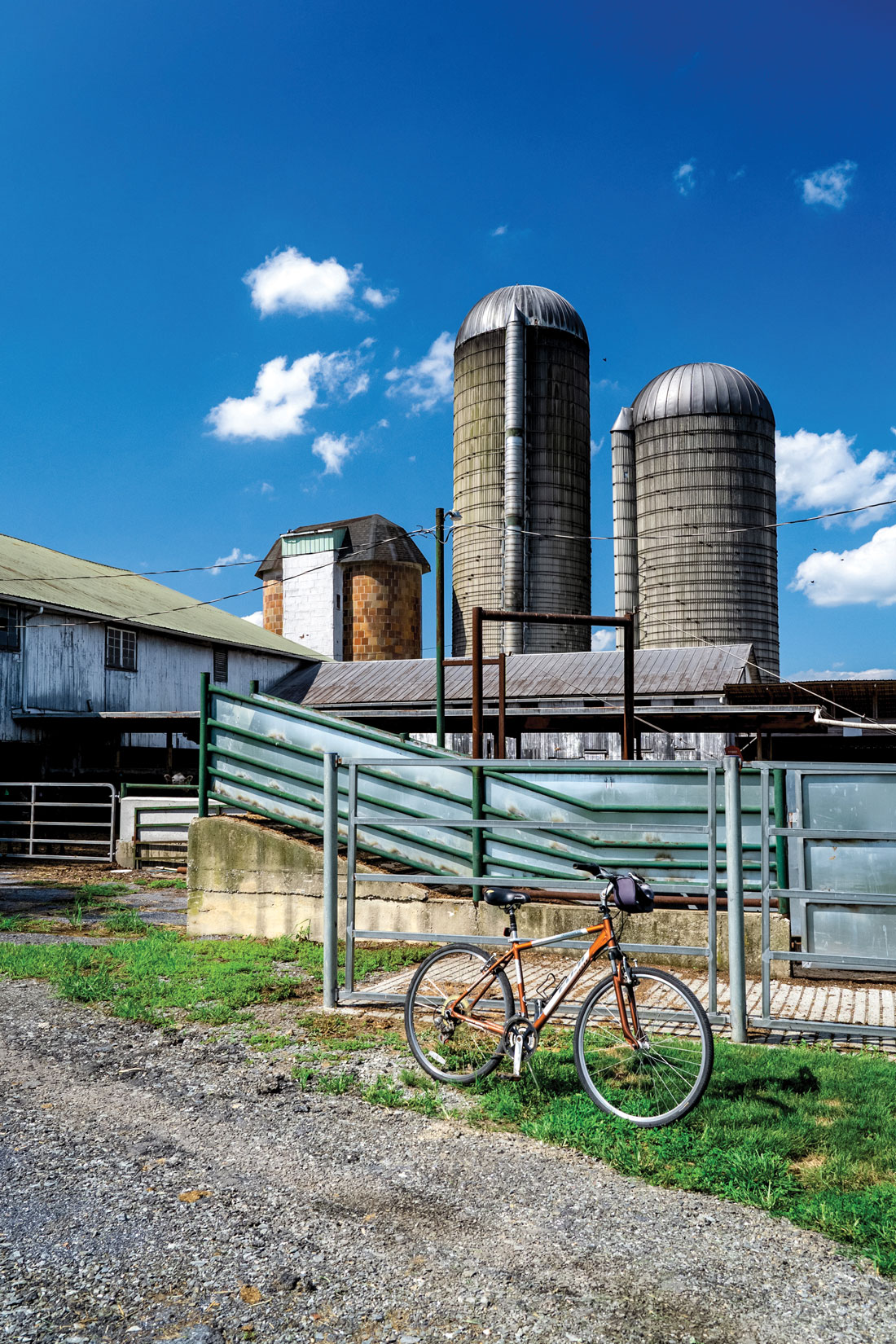 Silos store the grain and silage that are used to feed the herd.

He also finds that consumers have a new outlook on red meat due in part to lifestyles such as Keto. “I think people are beginning to realize how healthy beef is,” he says. “It’s a great source of protein. People appreciate the craftsmanship that goes into it – ours is dry-aged for 14 days.

“There’s nothing quite like a good steak,” Seth says, adding his family “eats a lot of beef.” He also has taken notice that local butcher shops are the new darlings of the foodie scene. 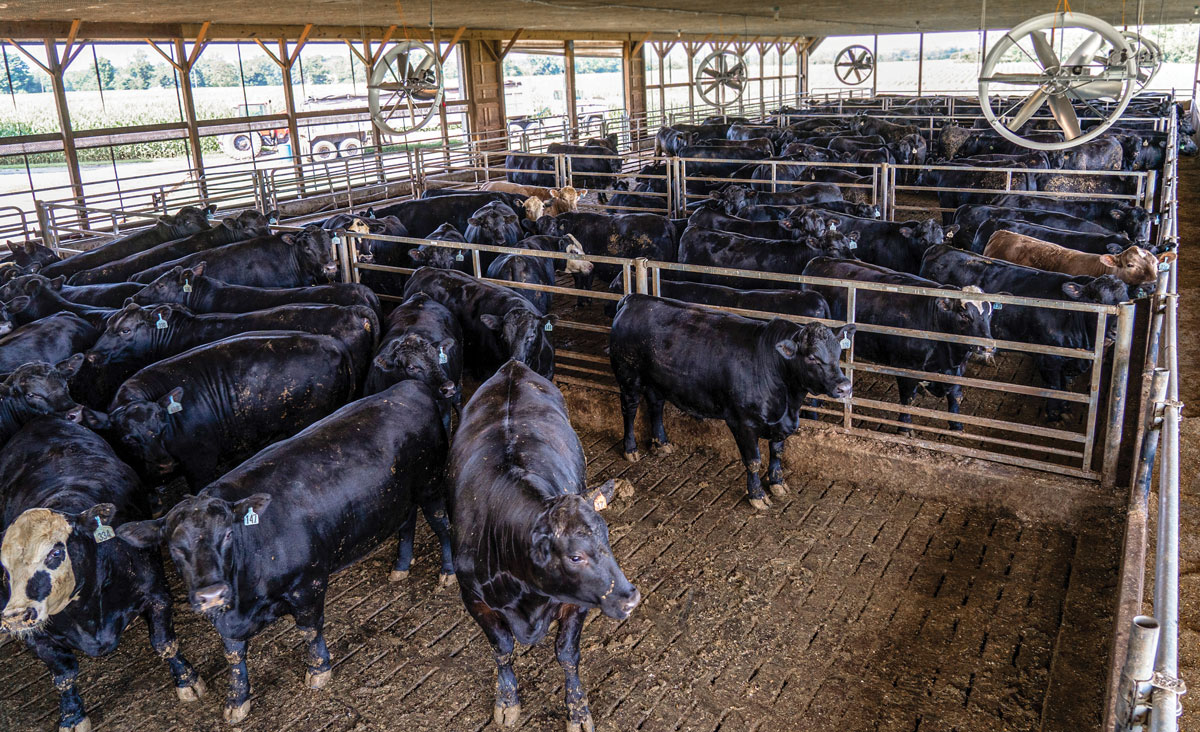 The Hersheys consistently invest in their business – last year, fans were installed in the open-air barn to provide better ventilation.

He also hopes that restaurants will return to the old normal and begin using Hershey’s Lancaster Beef products again. “I have my eye on the Baltimore and D.C. markets,” he says. “Having ‘Lancaster’  in our name really helps to open doors,” he notes.

Seth and Kelsey, who met through church youth group, have been married for seven years.