Callaloo Trinidadian Kitchen pairs the flavors of Trinidad and Tobago with a wider Caribbean – and even international – cuisine. The restaurant, which is owned by Amos and Amanda Kinert, opened in Lancaster in May 2017. By year’s end, Buzzfeed had named it as Pennsylvania’s must-try new restaurant for 2018. (The results, which featured one restaurant from every state, were based on Yelp reviews.) A native of Lancaster County, Amos spent three years in Trinidad, working in restaurants owned by his father-in-law. “I wanted to share the cuisine of Trinidad, which is a blend of many ethnic cuisines from the people who settled there. There is a wide variety of restaurants in Lancaster, but nothing like this. We feature Trinidadian comfort foods reimagined,” he says.

The restaurant’s name was inspired by callaloo, a leafy green vegetable that is similar in appearance to spinach. It’s also the name of a dish that’s made using the plant. Amos adds that “callaloo” is also a Trinidadian slang expression that means a mixing or combination of things.

Located at the corner of Lemon and Mulberry streets – you can’t miss the mint-green front doors – the building once housed a grocery store and, more recently, was occupied by Mulberry Street Diaper Company. Now, it’s a cozy, light-filled – courtesy of the large storefront windows that flank the entrance – restaurant space. Graphics on the windows not only feature the restaurant’s name, but also an image of a hummingbird. Amos explains that Trinidad and Tobago is known as the “land of the hummingbird,” and indeed, hummingbirds can be found on the national crest of the country as well as on its currency. Inside, a large mural/map depicts Trinidad and its sister islands (including Tobago) and shows its proximity to the South American country of Venezuela. Large, colorful posters provide an explanation of some of the cuisine. An exposed brick wall adds to the ambiance.
The cozy element is reflected in the seating capacity – 34 guests can be accommodated at counters by the large windows and near the cashier area and at a row of tables that share banquette seating along one wall.

The menu changes every six to eight weeks, but Amos says customer favorites remain a part of it. “Callaloo is not just a traditional Trinidadian restaurant; we do have some of the items that most people think of as Caribbean cuisine. Trinidad [and Tobago] was settled mainly by the French, and then it was held by the British. There were also some Indian, African and Asian influences. We focus on the beauty of all the cultures and their unique flavors and blends,” he says. “We also offer vegetarian or vegan dishes. It’s good to be able to offer menu items to please everyone.”

The top seller is curry chicken – boneless chicken thighs seasoned with and braised in house-made Trinidadian curry. “People liken it to a more flavorful chicken pot pie,” Amos explains, referring to other ingredients such as Yukon Gold potatoes, curried chickpeas and roasted pumpkin. “People often think that all curry is ‘hot,’ but that’s not the case with Caribbean curry. Caribbean curries are more savory, while Indian curry is more aromatic.”

The curried chicken is one of several menu items served with Buss-Up-Shut, a Trinidadian flatbread that’s used as a utensil to eat curries and stews. It’s flakey like a pastry but soft like a tortilla. There’s also Aloo Pepper Roti, a shared plate featuring roti, an Indian flatbread, and potatoes seasoned with cheddar, cumin, garlic and habanero. Another popular item is Doubles, traditional Trinidadian street food comprised of a fried bread called bara with curried chickpeas, cucumber chutney, tamarind and cilantro sauce (pepper sauce is also available). Seasonal favorites from spring/summer 2017 included jerk chicken with sugar snap peas and tomato choka (roasted or grilled tomatoes which are then crushed and mixed with onions and cilantro). “These both feature fresh, local produce,” Amos says.

While French fries are not on the menu, cassava fries are. Cassava is a tuberous starchy root that’s a vegetable staple in the Caribbean diet. Callaloo’s cassava fries are crispy and served with garlic and cilantro sauce.

For lunch, sandwiches are served on house-made coconut bread and are accompanied by tangy sauces, plantain chips and pineapple chow.

Callaloo also features some signature drinks such as LLB (lemon, lime and bitters) and Peanut Punch (peanuts, milk, turbinado sugar – sugar from pure cane sugar extract – and nutmeg). Customers are welcome to BYOB (there is a $5 corkage fee).

To cap the meal, there are two scrumptious desserts: Coconut Bread Pudding and Ginger and Lemongrass Crème Brulée.

Callaloo Trinidadian Kitchen is located at 351 North Mulberry Street, Lancaster. Lunch is served Tuesday-Saturday, 11:30 a.m.-2:30 p.m. Dinner hours are Tuesday-Thursday, 5-9 p.m., and Friday and Saturday, 5-10 p.m. Reservations are suggested and can be made online or by phone. The menu is available for take-out. For more information, including parking instructions, call 717-824-3964 or visit callalootrinidadiankitchen.com or Facebook. 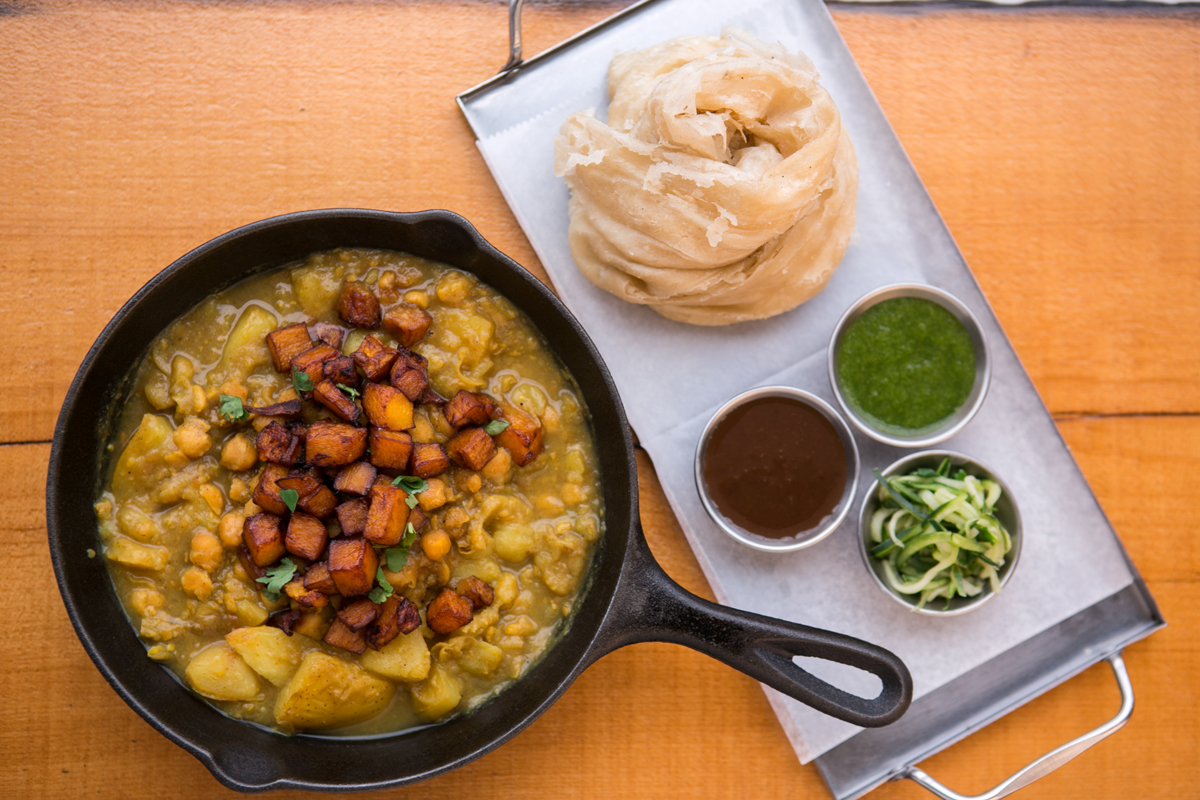