In the rehearsal space for Dutch Apple Dinner Theatre, Randall Frizado talks with four adult actors who wear red T-shirts emblazoned with the words “Imagination Station.” The room has been transformed into this place, The Imagination Station, featuring an auto shop, a diner and a library. After a couple words of instruction from Randall, the actors spring into action! 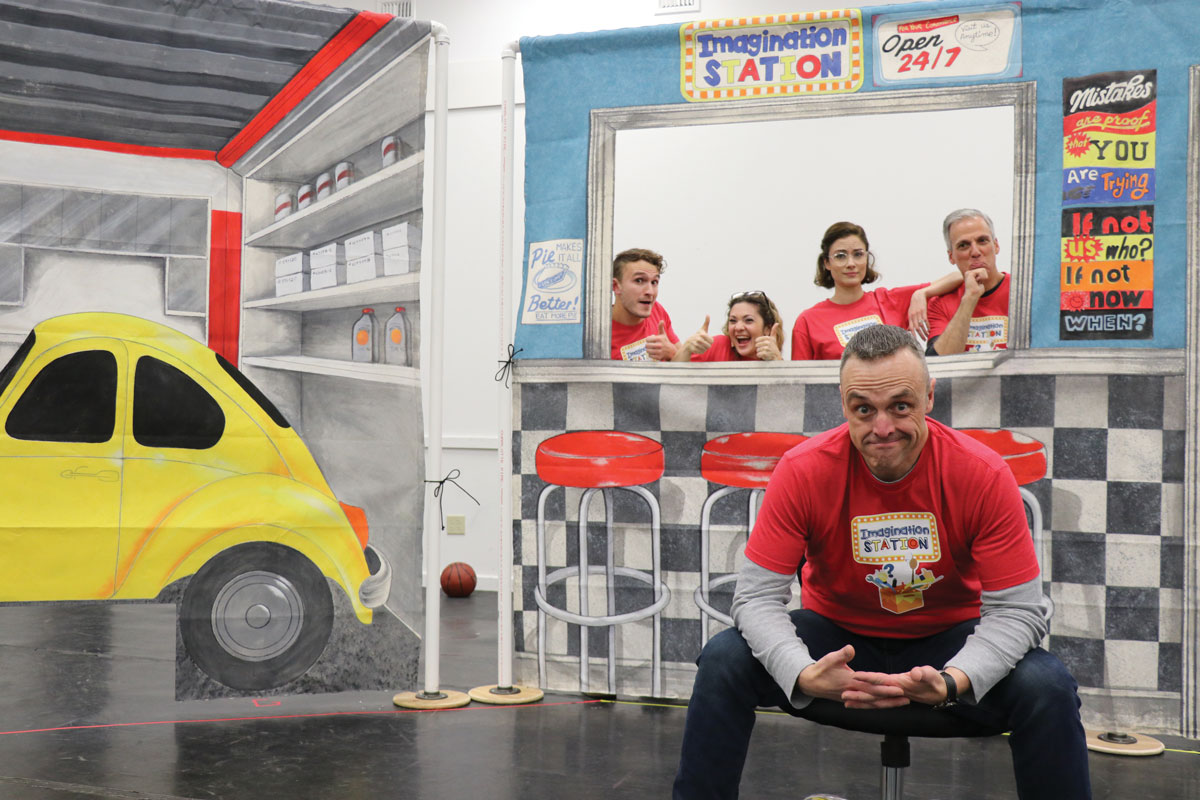 Squeezebox is a whiz with food and runs the diner; beneath his gruff exterior beats a heart of gold and he is always ready with a tune … or some kind of noise. The mechanic is Sunshine, and she is responsible for keeping all the machines of The Imagination Station in working order; she smiles constantly and has a tool for every job. The Professor is the smart guy and his task is to help those who need any information; he’s neat, precise and has excellent posture, but always seems to be misplacing little things like his keys or glasses. Izzy is the star of the show, but she is really just a 12-year old kid who is curious and always ready for an adventure; all of the events in The Imagination Station spin from her daily life at school.

A Show for a Child-audience

This particular afternoon in December the cast of The Imagination Station is fresh off a local TV appearance and spirits are bouncing off the walls – just like they should be for a traveling production aimed at elementary school-aged children. The goal is to get the show into as many Lancaster County schools as possible this spring with an expanded lineup next fall. The Imagination Station premiered at Hans Herr Elementary in December 2019.

“When I was young, a troupe of actors would come into our school and put on a show about things like good hygiene, behavior or safety,” says Randall, who grew up in California and moved to Lancaster County for his acting career. Before taking over the role of Director of Education and Outreach at Dutch Apple, Randall could be seen regularly on the Fulton Theatre and American Music Theatre stages. “There’s nothing like that in elementary schools now. So, I came up with a program and the Dutch Apple was happy to partner with me,” he explains.

The program is The Imagination Station, a series of entertaining and educational mini-musicals aimed to help grade-schoolers learn key skills, make good decisions, and use tools to handle challenges through the use of Social-Emotional Learning – the process through which children manage emotions and achieve positive goals. As written by Randall, a father of grade-schoolers himself and a graduate of The American Musical and Dramatic Academy, The Imagination Station also helps students feel and show empathy, maintain positive relationships, and provides the tools – being an operative word for this program – to make responsible decisions. There are currently four episodes of The Imagination Station, which could resemble a popular children’s television show, focusing on bullying, self-esteem, cyber awareness, and health/hygiene. 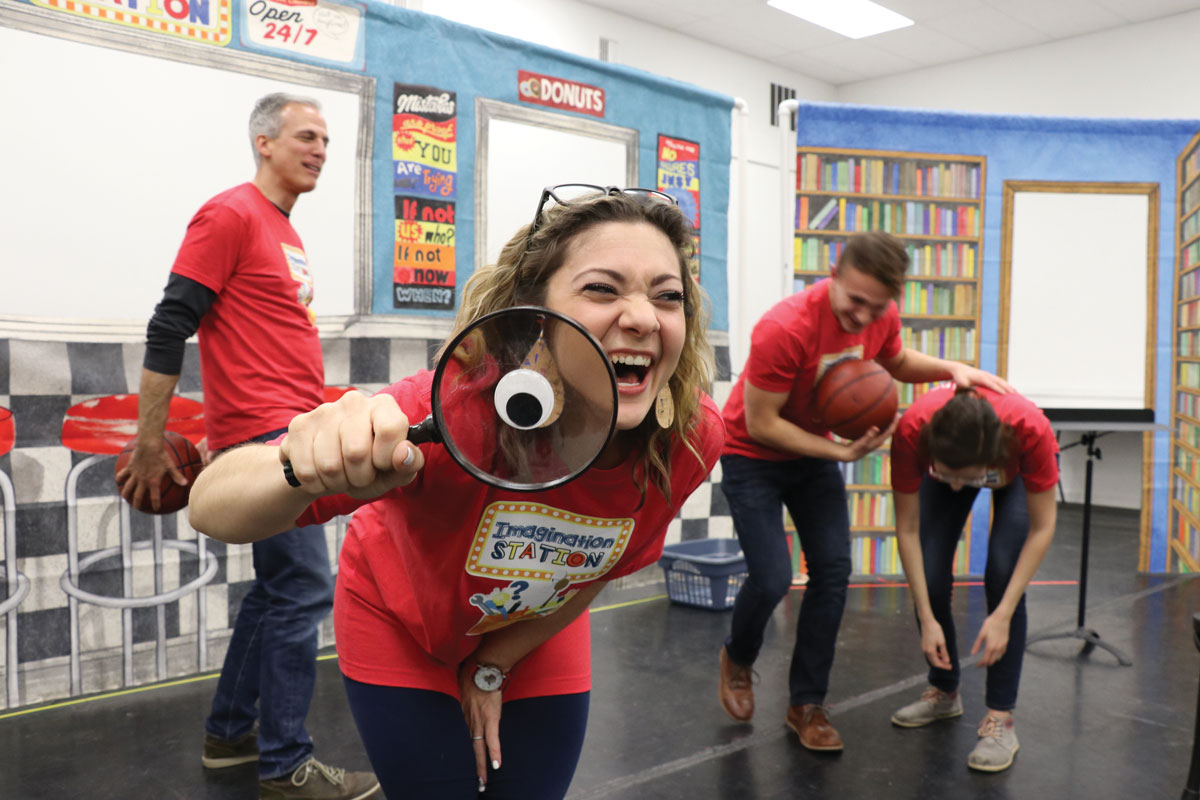 The cast of The Imagination Station brings a variety of life and career experiences to the project that is a partnership of creator Randall Frizado and the Dutch Apple Dinner Theatre.

The show in rehearsal, The Super Dooper Bully Looper, focuses on bullying and opens with plenty of slapstick and fun “facts” as viewers are introduced to each character. It’s Izzy’s first day back to school and she is excited. The excitement soon turns to anxiety when she ends up sitting next to class bad-boy Daxton McGrubin. It seems like Daxton plans to make Izzy’s life miserable. “Luckily her friends have the answer, and a way to turn a bully into a friend,” Randall notes.

Despite often being typecast because of her diminutive stature, Angela DeAngelo-Erkert is big enough in personality to pull off a leading role like Izzy. Angela, a native of Berks County, studied theatre and dance at Muhlenberg College and was seen by some Lancastrians in Drinking Habits at the Rainbow Dinner Theatre.

Hailing from considerably further away, Wes Guidry is from Grand Lake, Louisiana, and plays Squeezebox (and Daxton McGrubin). Wes, who studied at Louisiana College, was recently seen in Ephrata Performing Arts Center’s Newsies as Crutchie; outside of theatre, he works with preschool-aged children. 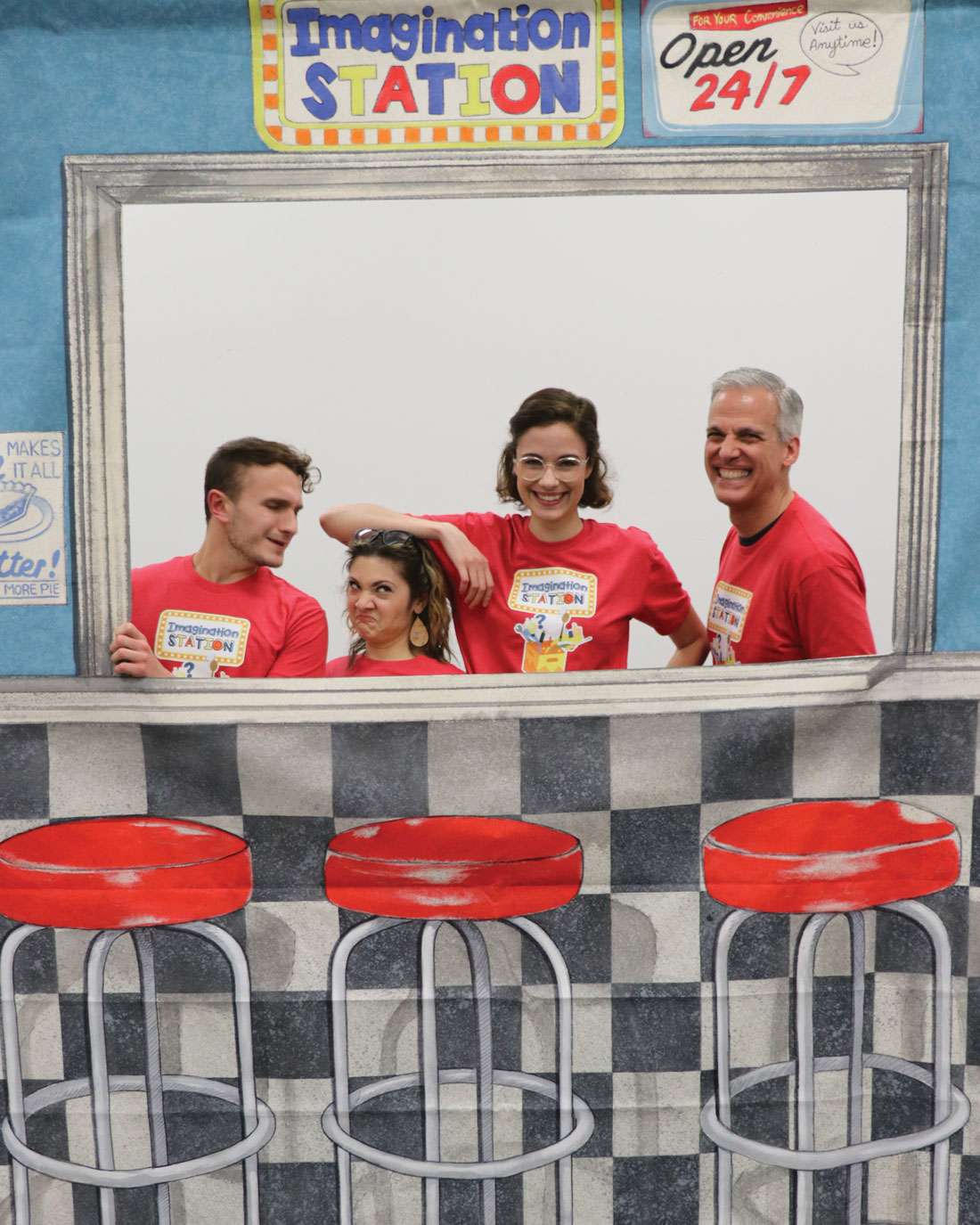 Kayla Kasper, who plays Sunshine, studied vocal performance at Lebanon Valley College, where she continues as part of the faculty as an adjunct instructor in music. This is not her first foray into theatre for kids; she joined the Gretna Theatre Educational Outreach Tour in 2018 and 2019.

The Professor is played by Elliot Sterenfeld who took the most non-traditional path to the stage. The Princeton grad and Long Island native is otherwise known as Dr. Elliot Sterenfeld, a physiatrist in the Lancaster community.

Every one of them is beyond excited by the opportunity to work on The Imagination Station. And, the four actors are not alone on stage. Each 35-minute episode is loaded with crowd interaction – including some willing or unwilling teachers and administrators! “There’s a lot of audience participation. Teachers get up and interact with kids on stage. It’s really about the kids and the audience,” says Randall.

The Imagination Station also offers an interactive study guide to assist teachers and administrators in opening a dialogue with students before or after the show. Actors are available for classroom visits after the performances to talk with the students, answer questions, and chat about life in the arts.

Other episodes of The Imagination Station include The Biggest Book Report Ever!, The Case of the Cranky Computer, and The Stinky Foot Man.

“Next season we will make more and create, basically, a menu for schools to be able to tailor to what they are focusing on as an institution. For example, if a school is trying to address cyber awareness they can choose The Case of the Cranky Computer, which fits that goal,” Randall explains. “It’s all about giving these kids the power to make good decisions on their own.”

For more information about The Imagination Station, visit Facebook.com/Theimaginationstation or Dutchapple.com.

The cast of The Imagination Station brings a variety of life and career experiences to the project that is a partnership of creator Randall Frizado and the Dutch Apple Dinner Theatre.