Members of some of Lancaster’s most historically significant families gathered for a catered private dinner, hosted by the winning bidders from a local fundraiser. As it turns out, the real winners are many and varied, linked by the powerful connections of sharing one’s abundance – and one’s self – with others. 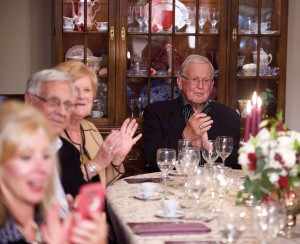 Charles and Beulah Frey and their guests express their appreciation for the delicious dinner Nino Elia and his family prepared.

Among the families who have played significant roles in shaping the growth and success of Lancaster County are the Freys, who grew a small dairy and milk-delivery business into the nationally known Turkey Hill Dairy; the Highs, whose 1931 welding business spawned the multi-faceted corporation High Industries; and the Clarks, who were pioneers of the tourism industry in the 1960s, creating Dutch Wonderland and other attractions.

Members of each of these families recently gathered for a special evening: an intimate dinner for 10, prepared by a personal chef and held in a beautifully appointed Victorian-inspired  inn.

The Freys were joined by close friends Janet and Calvin High, who, along with his brother Dale, helped grow their father’s High Welding Company into today’s High Industries.

Also joining the dinner party were Guy Eshelman and Molly Clark Eshelman. Guy Eshelman devoted his life to agriculture, growing a successful business through the vegetables that took root in Lancaster County’s fertile soil. And the entrepreneurial spirit of Molly Clark and her late husband, Earl, helped to establish Route 30 East as the epicenter of Lancaster County’s tourism industry.

The sparkling evening was made possible because of the Freys’ philanthropic support of the Water Street Mission. At the organization’s annual Top Chef Dinner & Auction, unique dining experiences are the sought-after commodities, as guests bid during a live auction to capture a chef-for-a-day party with a professional chef, or dining at a Philadelphia restaurant via chauffeured limousine. Among this year’s highlights was a catered dinner at the Hurst House Bed and Breakfast, with table décor, flowers, menus and dinner service provided by the Top Chef’s planning committee. 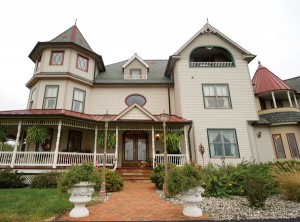 Hurst House sits high atop a hill in Farmersville.

Tucked away in quaint Farmersville, between Ephrata and New Holland, the Hurst House is an elegant Victorian- style estate owned by Rich and Bert Hurst, whose family’s heritage includes another mainstay of Lancaster County – the one-of-a-kind Oregon Dairy supermarket and down-home restaurant. Rich was a homebuilder for 37 years, but he is hardly retired. He and Bert are the full-time, hands-on innkeepers, who take each guest’s comfort as a personal mission. Their warm hospitality is frequently mentioned as one of the highlights of guests’ experiences in the glowing reviews.

Located high atop a 17-acre property, Hurst House overlooks hundreds of acres of Amish and Mennonite farmland. Meticulously constructed in 2000, its five guestrooms and luxurious common areas are furnished and decorated with authentic antiques and amenities gleaned from their travels around the county and to international destinations such as Venice, Italy, and other spots. 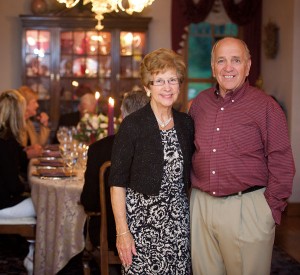 Owners Bert and Rich Hurst made Hurst House available to the dinner party.

On this special evening in early October, the dining room was decked in plum and gold linens, shimmering silver candelabras and fresh flowers abundantly overflowing their graceful vessel. As the guests arrived, the chef was putting the finishing touches on the first of his four-course Italian feast: a classic appetizer (antipasto) with sopressata, sharp provolone, stuffed grape leaves, olive, prosciutto-wrapped melon and artichoke bruschetta.

For information about the Hurst House, visit hursthousebandb.com. The Hurst House will be one of the 22+ inns open for this year’s Belsnickle Christmas Tour being held December 4 & 5. Visit lancasterbb.com for details. 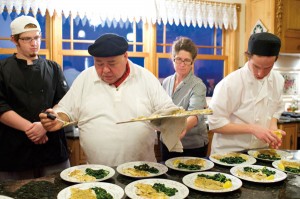 The Elia family – Salvatore, Nino, Elizabeth and Francesco – worked in tandem to create the dinner that took its inspiration from Nino’s native Sicily. Here, they plate the third course: fillet of sole “oreganata” and sautéed spinach.

a recipe by Chef Antonino Elia

Antonino Elia’s roots are far from Lancaster County. Emigrating from Sicily to the U.S. in 1972, Antonino’s family of two brothers, a sister and his parents settled in Harrisburg. His first American job in a pizzeria ignited his passion for food and defined his career. Later working side-by-side with his parents in their own pizzerias and restaurants, then traveling the mid-Atlantic and Florida as a chef, “Nino” honed his craft as he married Elizabeth and nurtured a family of six children. His two youngest sons – Salvatore and Francesco – who work in the restaurant hospitality industry, assisted him and Elizabeth in the Hurst House’s kitchen to create the multi-course dining experience.

“My mission has always been to showcase the Sicilian culture,” says Nino, as he prepares a pear and gorgonzola risotto for the “primo” course. “Sicilian cuisine has been influenced by many cultures –
Greek, Roman, Norman, Byzantine, Spanish and even the Germans. And throw in a little North Africa and Arabia, as well.”

As guests ooohed and aaahed over the risotto, Nino prepared a fillet of sole “oreganata” and sautéed spinach. “Sicily is an island, so there’s no shortage of seafood,” he explains.

“Sole – or sogliola – is a nice, light, delicate white fish. Oreganata is used on dishes like clams, shrimp and so on, using bread crumbs, oregano, which grows wild, and citrus like lemons, limes and oranges. When I went to Central Market that morning, I noticed some nice, fresh baby spinach and decided to incorporate it with the sole.”

In addition to creating in-home dinner parties and coaching struggling restaurants to success, Nino also teaches an “authentic Italian” monthly cooking class with his sister Maria Quaranta at Zest! in Lititz. “I have a visible passion for food that inspires every aspect of my culinary practice,” says the rotund chef, who brings “over 40 years as a chef, food historian, culinary educator and researcher of southern Italian and Sicilian cuisine” to the table. “My journey is one of passion and love,” he professes.

A dazzling fruit tart – provided by Nino’s friends at La Dolce Vita in Downtown Lancaster – finished the evening on a sweet note. “After such a meal, dessert calls for something light,” he explains.
The dessert was accompanied by the Italian tradition of espresso. Nino refers to his rendition as “stovetop espresso,” whereby individual pots are brewed, and the first (and strongest) part of the brew is whipped with sugar to create gremolata, which is a caramel-flavored paste that topped each guest’s demitasse cup of espresso. Authentic, indeed.

For information about Nino’s classes at Zest!, visit Zestchef.com. This month Nino and Maria will be hosting Feast of the Seven Fishes classes on December 14 and 15. Call 626-6002 for reservations.

Table Décor: Heather Colosi of Will Do For You Concierge

Centerpiece: Stacia McComsey of Petals With Style, and Robert Fenninger of Fenninger-Brown 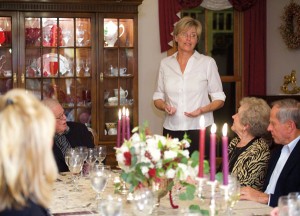 Program Administrator Bethany Woodcock shares information about the projects she is involved with at the Mission with dinner guests.

Dinner conversation among the guests turned to what brought them together on this night – the Water Street Mission. Marking its 110th year, the Water Street Mission provides food, shelter and healthcare to the homeless, but holds a broader mission of transforming lives through rescue and renewal on both physical and spiritual levels. Over 400 lives are impacted every day. Multiplied over its 110 years in existence, it’s hard to imagine a local nonprofit entity that has wielded greater influence on those in need than the Water Street Mission. Likewise, the need is great for continued community support, particularly as Lancaster enters its coldest, cruelest months for the homeless.

The kitchen staff – the chef and his family and Water Street staff and volunteers – were invited to join the guests in the dining room to share the latest projects of the Mission and their own life’s work.
As guests said good night, Charles Frey summed up the spirit of the evening, observing, “When you make money and then you retire, you are able to see it is the giving that makes you happy. I used to think that the joy was in making money, but the greatest joy is giving.”

For information about the Water Street Mission, visit WSM.org. 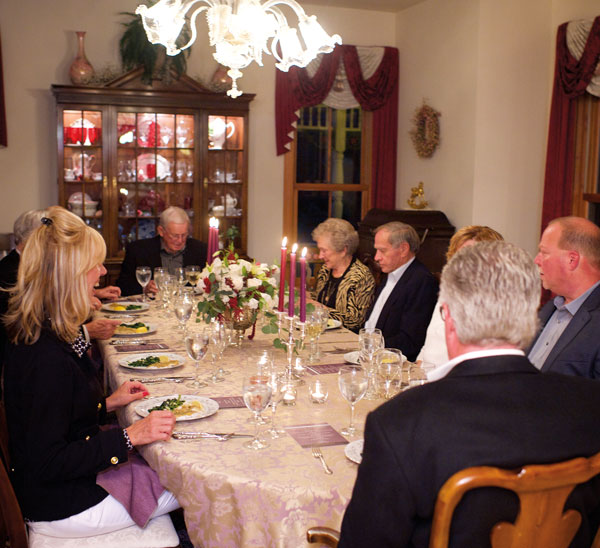 Host Charles Frey (at far head of table) welcomed his guests to the dinner for which he placed the winning bid during Water Street Mission’s Top Chef Dinner & Auction.