Like many of you, I was obsessed by the story of Libre. If you visited the Facebook pages of Speranza Animal Rescue and Dillsburg Veterinary Center, you probably became aware that this story went viral  – as in worldwide – almost overnight. Checking up on Libre was the last thing I did at night and the first thing I did in the morning.

Why did the story resonate with so many people? If you’re a dog lover, that is an obvious answer. I also heard people say that in view of the world’s problems, Libre’s story gave them a reason to hope for the impossible and rejoice in the positive outcome.

Libre is definitely a special little dog. There’s a vibe about him that makes you smile. He’s incredibly friendly and is nonchalant about his celebrity status. All I can say is that the stars were in alignment on July 4. Who knows what would have happened to Libre if Dextin, Jennifer, Janine or Dr. Pryor had been unavailable that day. 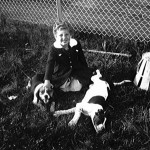 Dogs are funny things. They get to you. I like the saying, “Dog is god spelled backwards.” I think about the dogs that have touched my life. Nellie and Tippy, two beagles who were my grandfather’s hunting dogs, were the first. I loved to visit them at my grandparents’ house on Cabbage Hill.

Dogs were a no-no at our house. My father had a multitude of allergies, and my sister, Ginny, was deathly afraid of dogs as a result of being bitten by one at the farm where we often played. (In all fairness, she got too close to the beagle’s puppies and the dog reacted.) She remained terrified of dogs for the next 20 years. Her fear eventually subsided as a result of helping one of her coworkers with her kennel in Goochland County, Virginia. Celie bred Great Danes and Welsh Springer Spaniels. Occasionally, Ginny would be reimbursed with puppies for taking care of the property when Celie was at dog shows. Maggie was Ginny’s first dog.

Ginny in turn gave me a dog from one of Celie’s Welsh litters. My husband and I were thinking of names on our way back from the Outer Banks, and as we crossed the sound, we were inspired by the name “Currituck.” 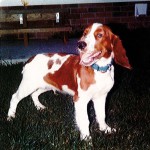 Curry was eventually bred to a dog in Northern Virginia, and I returned the favor and gave Ginny a boy from the litter that she named Callie (for Calabash, North Carolina). From there, Ginny added Dobermans, Australian Shepherds and Border Collies to her menagerie. One of her Aussies was named Buck. She got him soon after our cousin, Kevin Ritchey, was killed in a traffic accident. She couldn’t bring herself to call the dog Kevin, so she settled on Buck, since that was where Kevin lived. 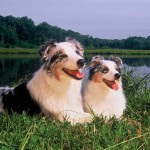 Buck inspired Ginny’s interest in agility. While she had luck on the circuit with him, she couldn’t help but notice that Border Collies were the real speed demons. So, she adopted one – which led to several more – sold her Bent Creek-like house, bought a farmette in Ashland, Virginia, built her own agility course and sheep-herding enclosure, purchased an RV, which led to a bigger RV, and now travels up and down the East Coast for agility events. She found some of her Border Collies through breeders, while others came from rescue groups. She and her husband often assist a Richmond-based rescue group with transporting death-row herding dogs to Richmond from as far away as Georgia. 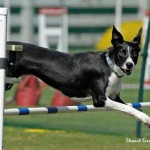 Two years ago she competed in Nationals, which were held at the Farm Show Arena in Harrisburg. If she’s close by, I’ll meet her. We call it payback for spending hours waiting for my son, Charlie, to swim for 30 seconds. Her newest dog is named Star, which is short for North Star (North for the North Museum, where we spent many a Sunday with our dad, and Star for Starling). 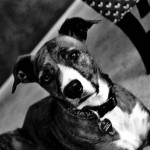 As for me, I’ve had two more dogs. Erika Estrada – who was obviously named after one of the stars of CHiPS – was a gift to my son from his then-girlfriend, who helped to rescue a litter of Spanish Greyhounds during a summer spent in Spain and found homes for them in the United States. When Charlie left for college, Erika became my responsibility. That dog got me through some tough times, including the deaths of my parents, and I’ll forever be grateful to her for that. After battling congestive heart disease for nearly a year, we said goodbye to Erika in April 2014.

Losing Erika was so traumatic that I vowed never to have another dog. But, you probably know how that turned out. Nearly a year had passed when I decided I had to have a dog. The house just wasn’t the same without one. So, I entered my name on petfinders.com and dogs would appear on my computer screen on a daily basis. One day, a dog that “spoke to me” appeared on Delaware County SPCA’s site. I asked Charlie to go with me for a look-see the day before a huge snowstorm was forecasted to strike the area. 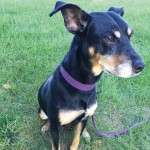 Of course, the dog had been adopted, but Charlie had made friends with what was billed as a Coonhound mix. She had been on the move, with her last shelter stop being in Kentucky. I liked the fact that she was from the South, where shelter dogs have little chance of being adopted or even surviving. In honor of her roots, we named her Miss Paisley.

It was a little rough at first, as she was prone to separation anxiety. While Erika was a social butterfly and never met a dog she didn’t like, Miss Paisley has only met one she likes, Eddie, the King Charles Cavalier who lives down the street. Sometimes I wish that dog could talk so I would know what makes her tick or what happened to her during her journey. My sister keeps bugging me to have one of those DNA panels done. Ironically, ads for them keep appearing on my Facebook feed. One of these days … 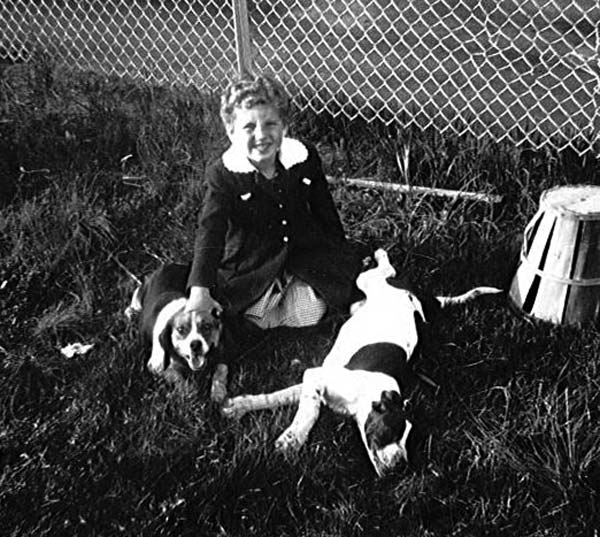