I started debating what to do as Halloween approached. For the first time in my life, I find myself truly living alone. As my son bid farewell – this time it’s probably the real deal since there is a girl involved – on his way to a new job in Allentown, he had one question on that early October morning: Will I be putting a tree up this year? Huh?

I didn’t quite know how to answer that question. And, I’ve been grappling with it ever since. I mean, on my way back home from the Outer Banks in late August, I stopped at the Cotton Gin to “run in” (OK, it ended up being an hour) and snag yet another lighthouse ornament for my tree. Two months later, I’m telling myself, “It’s just me, so what’s the point.”

After reading a story in The Washington Post about boomers who are trying to downsize their holiday decorating to the disappointment of their grown children, it seems I’m a typical member of that generation from a decorating perspective, as I have always subscribed to decorator John Hughes’ philosophy of “why do when you can over do.” Indeed! A room in my basement is filled floor to ceiling with boxes that contain ornaments, lights, pinecones, wreaths, swags, stuff I made, stuff Charlie made, things I inherited from my mom (plastic poinsettias and avocado-hued candleholders anyone?), my angel collection, my snowman collection, candles, faux greenery, a train set … Like my fellow boomers, I put up several trees. And, it was like a lightning bolt struck when I spied John’s trick of decorating the chandeliers. When Charlie was little, the exterior of our house resembled Las Vegas.

Where I get it from, I don’t know. As a kid, we’d put a tree up the week before Christmas and religiously take it down on New Year’s Day. Outdoors, one lone evergreen was strung with lights.

However, my parents had a really nice collection of ornaments that dated to the late ‘40s. Each year, my mother would add to the collection. Unfortunately, we lost quite a few of them one afternoon in the ‘60s. On that fateful day, my sister, Ginny, and I were sitting on the sectional sofa in the living room and admiring the tree. Ginny’s cat was sitting beside her. Suddenly, the cat got this terrified look on its face and tried to make a beeline across the corner table. However, the heavily waxed surface afforded the cat no traction whatsoever, so it looked as if he was running in place. That’s when the tree came crashing down. Apparently, the cat sensed the looming disaster.

My sister and I looked at the tree, surveyed the broken ornaments, then looked at each other and finally gazed at the table that was now marred with long, deep gouges. We tried to cover up the evidence by artfully arranging magazines and the newspaper over the scratches. Of course, my mother noticed them immediately and was furious. However, as time went by, the Christmas mishap became a running joke, and we’d all laugh whenever we looked at the table, which eventually ended up in a relative’s basement when my mom got hip to the country look and redecorated. About 20 years later, I was gifted with the ornaments that survived that disastrous afternoon. I treasure them and love the patina they now exude. And, I worry what will happen to them, as my son has yet to express any interest in them.

I also inherited my mother’s nativity. It dates to the early ’50s. As she told the story, she saw a gorgeous one that she really wanted at Darmstetter’s, a store that was once located on North Queen Street. She told my father about it, but he said $5 was way too expensive. So, she ended up with a cardboard and wax-like-plastic model from Woolworth’s. It cost all of 50 cents. Each year, we’d haul it out of the grocery bag we stored it in and put it on display. On New Year’s Day, it would go back into the bag and on a shelf in my dad’s basement workshop. The tradition continues. The only upkeep required in all those years was glueing a donkey back into place.

I love decorating my trees. The pink-themed tree in my bedroom is filled with things I helped to make for floral designer Jim Showers’ trees at Longwood Gardens. I miss those weekends when we’d gather around Jim’s kitchen table and make ornaments out of the natural elements he had collected over the summer. From Jim, I learned, “When in doubt, use diamond dust.”

The table-top tree in my living room hearkens to my German ancestry. I place it on the same table that my great-grandparents and grandparents used for their trees. It’s then filled with Santa ornaments, including Christopher Radkos that Ron Tschudy (who managed the Radko store at Doneckers) gave me, and paper stars that a former co-worker (now deceased) made for me.

The tree in the family room is filled with ornaments and keepsakes that remind me of  family, friends, pets, my counted-cross-stitch obsession and places I’ve been. Dawn Fisher, who you will meet in this issue, probably says it best, “Hold an ornament, and memories come flooding back.”

You know what? I think Dawn has convinced me to decorate my house for Christmas. One, I simply enjoy the ritual and the way it makes the house look. And, two, I really won’t be alone after all. My family, friends and memories will be there to keep me company. 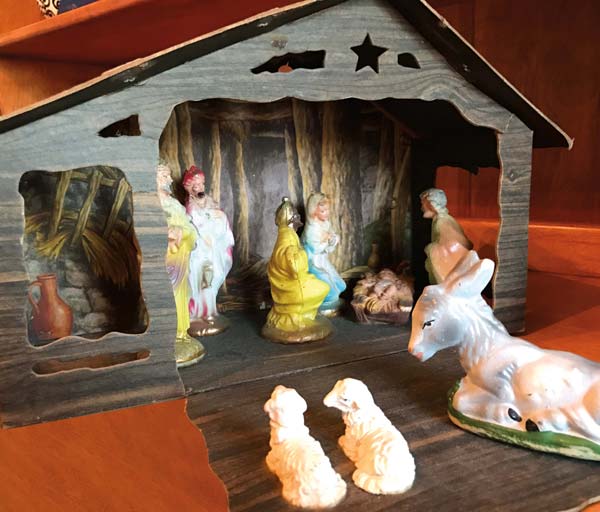