Like most nights, I checked my social media sites around 10 p.m. on Friday, October 28. The Instagram feed included pictures from the latest wedding Planned Perfection was orchestrating. The pictures were from Dietz Hall at the Lancaster Theological Seminary, which is home to the catering firm Gypsy Kitchen. Obviously, a rehearsal dinner was being held there. A familiar face popped up: Chad Snyder. “Oh, Chad’s getting married,” I thought to myself. “That’s nice.” I wondered who the lucky girl was.

I didn’t spend a lot of time sleuthing because the next day I had to work at my part-time job. I picked up a part-time job in retail when my son started college. For some odd reason, I always thought it would be fun to work in a department store during the holidays. My first day on the job was Black Friday 2007. I felt like I was being fed to the wolves.

Quite a few people asked why I would want such a job and suggested that I might try to pick up some freelance writing assignments instead. My comeback was why would I want to do something that I do all day. Once I overcame my fear of the computer-like cash register (technology and I are akin to oil and water), I began to feel more comfortable. And, I loved my co-workers. Most who work the night shift hold down full-time jobs and are working part time to put kids or themselves through college, pay off bills, give their daughters dream weddings or simply stay afloat. There are a few retirees in the mix, as well. My seasonal experiment has turned into a nine-year tenure. One more year, and I achieve the holy grail of retail: a lifetime discount.

I like retail for two reasons: First, I get to touch gorgeous clothes. It’s a family joke; my brother-in-law always warns shopkeepers that my sister and I must touch everything before we make a decision about what to buy. Second, colorizing and arranging the displays of clothing is like therapy for my OCD. If I’ve had a stressful day, organizing the clothing calms me right down. I’m sort of like that at home, too. If I’m stressed, cleaning out a closet or organizing drawers is a Zen-like experience.

Back to my part-time job. It was a busy Saturday morning. A young woman came up to me and asked if I could help her. She was going to a black-tie wedding that evening and needed a dress. She showed me her top choice and asked me what I thought. I assured her that she would look beautiful in the red dress she held up. Then, she whipped out her phone and showed me how she looked in it. I suggested that she add plenty of bling and she’d be good to go.

I began the transaction as we chatted. “Are you by chance going to Chad Snyder’s wedding?” I asked. Looking a bit dumbfounded, she said, “ yes I am.” That’s when the Q/A session began. “How do you know Chad?” she asked. I explained it was through the magazine. “Who is he marrying?” I asked her. She came back with “Lee Shand.” Then I asked the where and when questions.

About that time, her boyfriend showed up. He shared photos of himself in his tux and asked what I thought of the shirt and tie he had just purchased. Very nice choices, we both assured him. My customer then handed me her credit card, and I noted the name on the card and asked if Jane Doe is her mother and does she play tennis. “Yes, how do you know that?” she asked. I explained I met her when we photographed Meredith Jorgensen’s tennis “team” a couple years ago as part of a cover story we were doing about Meredith. “Oh, yeah, they’re friends,” she verified.

We went on chatting until the boyfriend interrupted. “Are you guys talking in some kind of code?” he wanted to know. Maybe he’s not from around here, I thought. He obviously doesn’t know about the “Lancaster connection” thing that we have going on here.

That night, pictures from the Snyder-Shand wedding were popping up all over Instagram and Facebook. I looked for “my” cute little couple but didn’t see them. I did see lots of pics of the newlyweds, as well as Jonnaysa Kirkham of Planned Perfection, Stacia McClune-McComsey of Petals With Style and Martine Cajas of House of Clarendon. It looked like a gorgeous wedding.

As luck would have it, Lee’s mother, Katie, was having dinner at FENZ a few weeks later. Bob Fenninger and Jill Brown, the authors of our Life of a Party column, wondered if Chad and Lee would be interested in sharing their wedding day with our readers. Katie put the four of them in touch, and we’re happy to share their story and beautiful pictures with you. 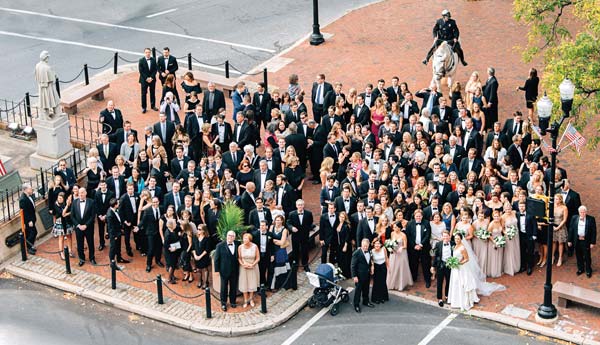