Spring always reminds me of my mom and dad. Each of them greeted the season with a sense of renewal and purpose. For my mother, spring meant cleaning. For my dad, it meant he could break out of the house and work from dawn to dusk in his yard. He loved nothing more than to mow the lawn and rototill his vegetable garden for the first time each spring.

Curious about how the ritual of spring cleaning materialized, I googled it. Interestingly, spring cleaning isn’t something Martha Stewart invented. However, her website includes a rather lengthy and ambitious To-Do list for the ritual that includes directions for the proper care of window screens. Geez, you would have to take a month off from work to tackle that list!
Instead, spring cleaning has religious and cultural connotations. For example, the ancient Persians liked to welcome the New Year, which falls on the first day of spring, with a clean house. It was their custom to “khooneh tekouni,” or “shake the house,” in the days leading up to the New Year. The custom apparently continues in modern-day Iran.

The ancient Jews also cleaned their homes in the days leading up to the spring holiday of Passover. And, it is customary for Catholics to thoroughly clean the altars of their churches on the Thursday of Holy Week.

Spring cleaning also became a major endeavor in cold-weather countries. After a winter spent nursing colds and the flu, March became the opportune time to open the windows and let fresh air sweep the germs away.

My mother’s obsession with spring cleaning now makes sense. I’m sure my Cabbage Hill-dwelling great-grandmother and grandmother helped to clean St. Joseph Church prior to Easter. And, considering that I spent a good deal of my childhood winters suffering with colds, she probably concluded the house was teeming with germs.

And, man o’ days, did that woman clean! The kitchen was ground zero. Every plate, dish and glass was washed. My sister and I never “got”  why she insisted on washing dishes (by hand, no less) that only saw the light of day at Thanksgiving, Christmas and maybe Easter. Pots and pans received the same treatment. Cupboards, closets and drawers were emptied and organized.

Organizing everything became my job. I credit my present-day OCD tendencies to that period of my life. Every pot had to have a lid, or I’d banish it to the basement. Soup cans were lined up in alphabetical order. Ditto for boxes of pudding. And, we had a lot of them. The promise of chocolate pudding was the only way my mother could get my finicky sister to eat her dinner. Me? I’d eat anything. To this day, I get cravings for pudding, only I prefer butterscotch.

after the kitchen passed inspection, we’d move to the bedrooms. About 25 years ago, I was helping my mom with her spring cleaning. She was determined to thoroughly go through the chest of drawers that had become a catch-all for things. In one drawer, we found a stash of rolled-up papers.  We went through them all, reminiscing along the way.

The last rolled-up paper proved to be a treasure. It was a drawing of my father. He was wearing his Navy uniform. It was inscribed “To a mighty nice boy!” The drawing was signed “Florence Starr Taylor” and dated 1946. It seems the celebrated artist had donated her artistic talents to Lancaster’s USO during World War II. My father, who grew up in North Carolina, joined the Navy and was stationed in Bainbridge, Maryland. He and his buddies occasionally came to Lancaster. When he met my mother on a Saturday afternoon in downtown Lancaster, he became a regular visitor.

We called my father into the bedroom and showed him the drawing. He vaguely remembered posing for “some woman” who offered to do a drawing of him. I was excited by the discovery. We had done a story about Florence early in my days at the magazine. She was a character. We all loved her.

My mother and I decided that a treasure such as this did not deserve to be hidden away in a drawer. It needed to be framed and displayed. And, I knew just the person for the job: Ron Ettelman, owner of Dream Framer in Mountville and one of Florence’s most devoted fans and friends.

Incredibly, the drawing of my father took on a life of its own. Over the years, it appeared in several of Florence’s retrospective art shows, many of which were curated by Ron. One time, it appeared on WGAL to publicize one of the shows. And, nobody was more proud of “his” portrait than my father. While it now hung in our house, he got a kick out of going to the shows and taking a gander at it.

I am now the keeper of the portrait. It hangs with a few Florence Starr Taylor paintings my mother purchased from Ron and gave to me as Christmas gifts. One day, it will belong to my son, who is his grandfather’s namesake.

As for cleaning, neither my sister nor I inherited that gene. The other day, I looked at the tumbleweeds of dog hair in the hallway and thought to myself that my mother would be mortified. Just last night (April 3), I finally finished putting away Christmas decorations. 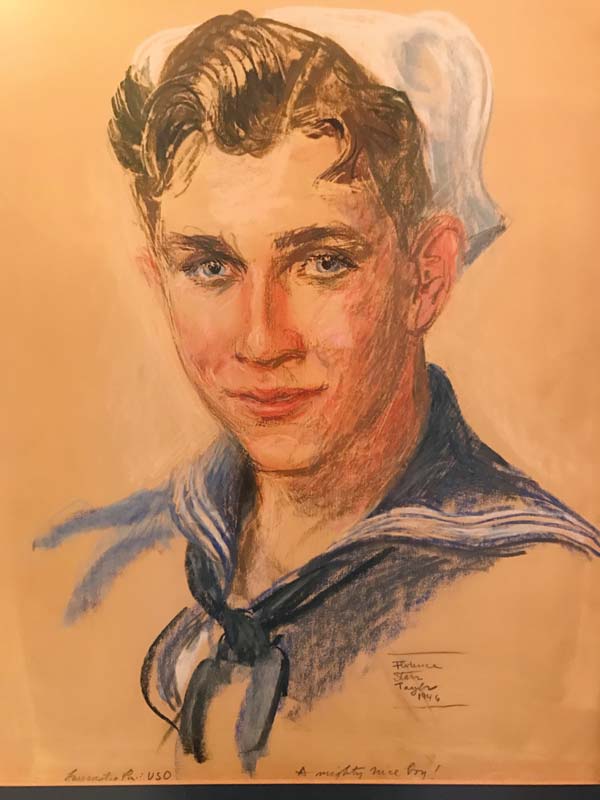