In October, there’s not a ghost or goblin to be seen at the home of Stacey Toomey.  Instead, pumpkins and gourds share the spotlight with summer’s last blooms, fall’s signature plants, perennials with interesting foliage, graceful grasses and a surprise element or two. “I don’t have a plan,” Stacey says of her displays that perfectly capture the essence of the season. “I just let nature take its course.” 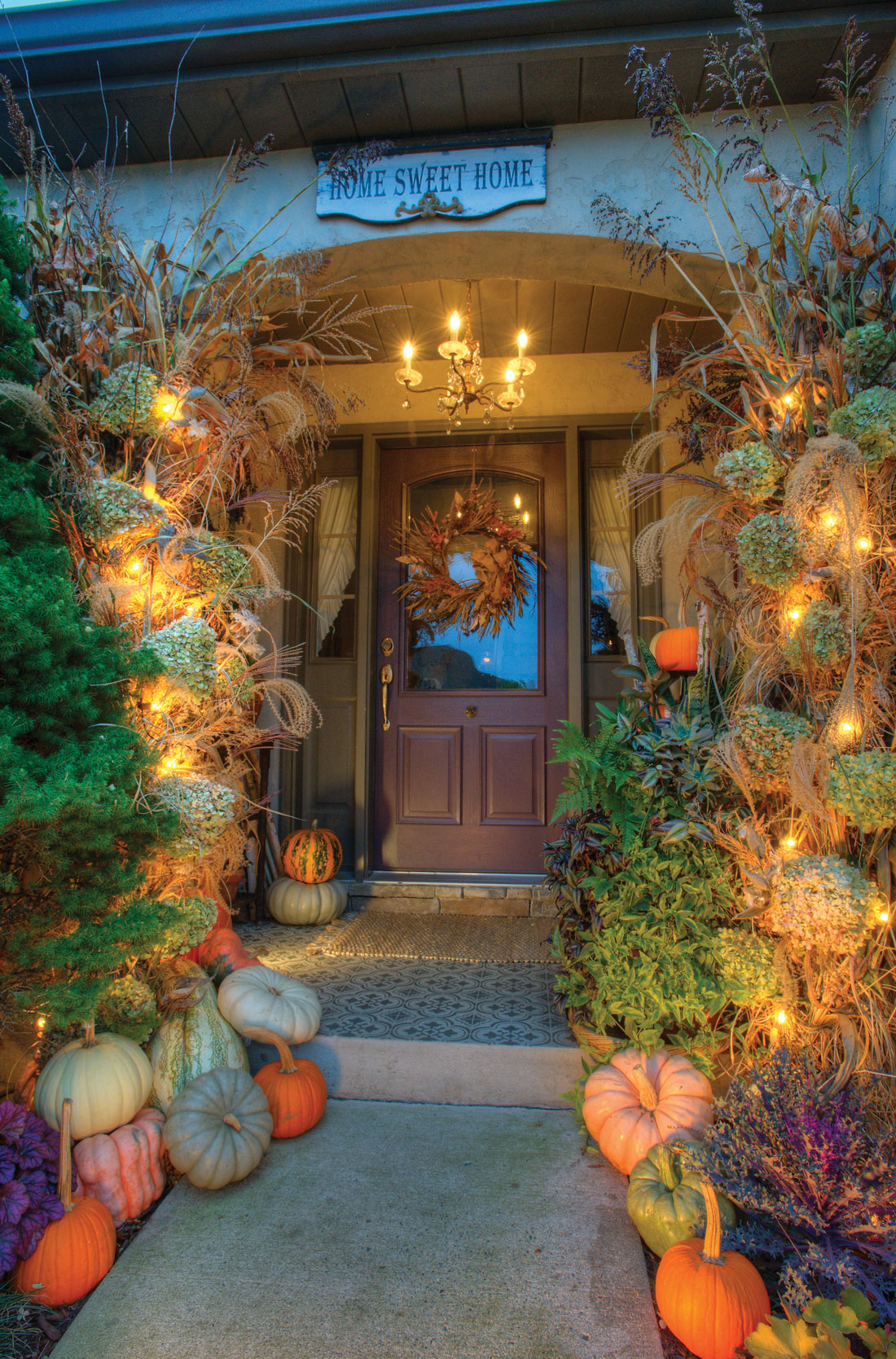 Last year, an array of pumpkins and gourds lined the walkway that leads to the Toomeys’ front entryway, which was enhanced by an arch that Stacey created from cornstalks, ornamental grass, birch twigs, dried hydrangea and white lights.

No doubt, Stacey is genetically gifted when it comes to all-things home. “I’ve always been creative,” she says. “I probably get it from my mom. She was a nester. She was always doing something – sewing, wallpapering, gardening. I guess I get it from having seen all that when I was growing up.” The mother of three views gardening and decorating as “my form of art.”

Stacey, who grew up in Lancaster, also credits her father’s side of the family for her green thumb. Stacey’s second cousin – Marty Henry – owns Henrys’ Farm & Greenhouses in Holtwood. “Oh, gosh, I’ve been working at Henrys’ for as long as I can remember,” Stacey says. “Because I had worked at a garden center [her husband’s family once operated the Boas Garden Center on Columbia Avenue], Marty asked me to come and work for her,” Stacey recalls. “Initially, I helped customers at the register, but as Henrys’ evolved, I became more involved behind the scenes.” 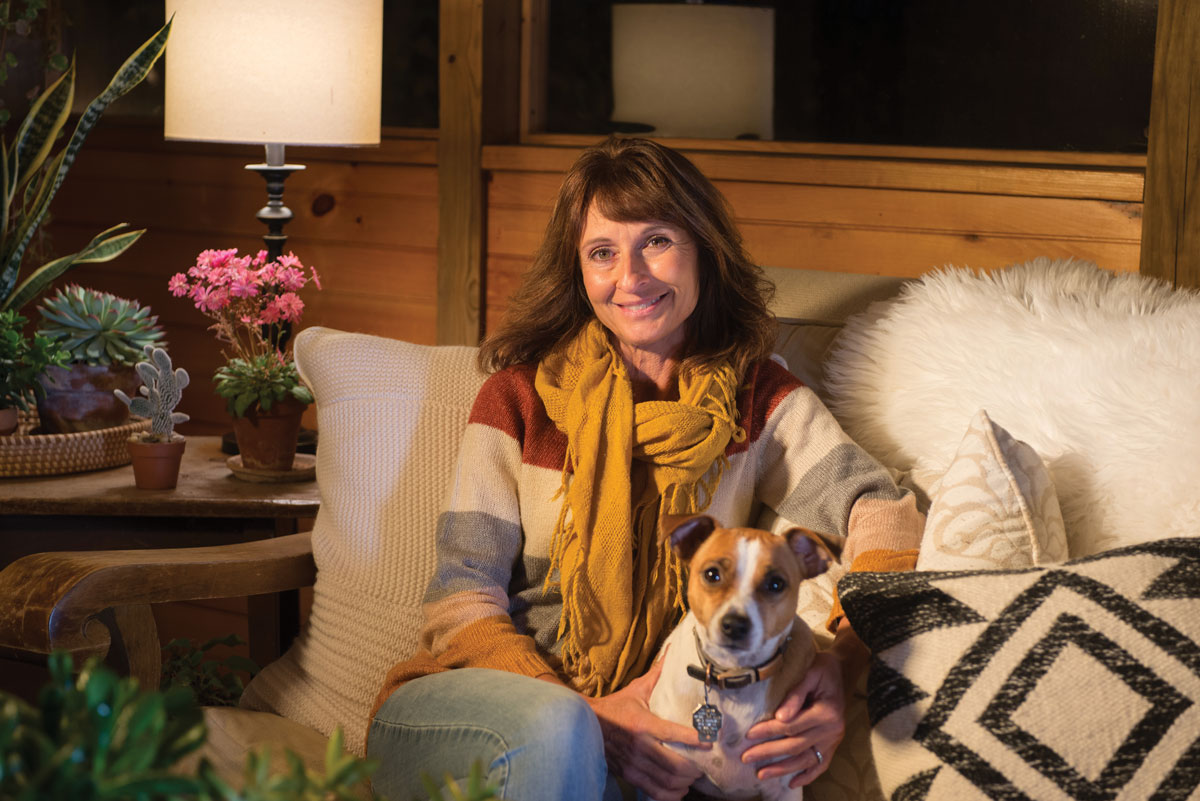 Stacey and Briar relax in the plant-filled three-seasons room.

Marty launched Henrys’ in 1990 as a way to stay at home with her three daughters and remain engaged in her horticultural career. Because the farm raises everything from the mainstays of the garden to the newest must-haves, Henrys’ developed a sizable base of wholesale and contract clients over the years. Eventually, they also opened to retail customers during a six-week window each spring and again at holiday time.

When Henrys’ announced late last year that retail was being discontinued for the foreseeable future, fans were devastated. Looking back, it was as if Marty had a crystal ball that told her that things would be different in the spring of 2020.

“It was a different kind of spring,” Stacey says. Not having to get the greenhouse ready for the open house that kicked off the retail season – which entailed whimsical displays that always included “found” items and fanciful container gardens that Stacey helped to create – felt odd. Yet, despite the pandemic, business carried on as usual, since contractual and wholesale orders had to be fulfilled. “Fortunately, we were able to stay open,” Stacey explains, referring to their “essential business” status during the early days of the pandemic. “We all got to continue working together,” she says of the tight-knit staff. “There was plenty of space for social distancing.” 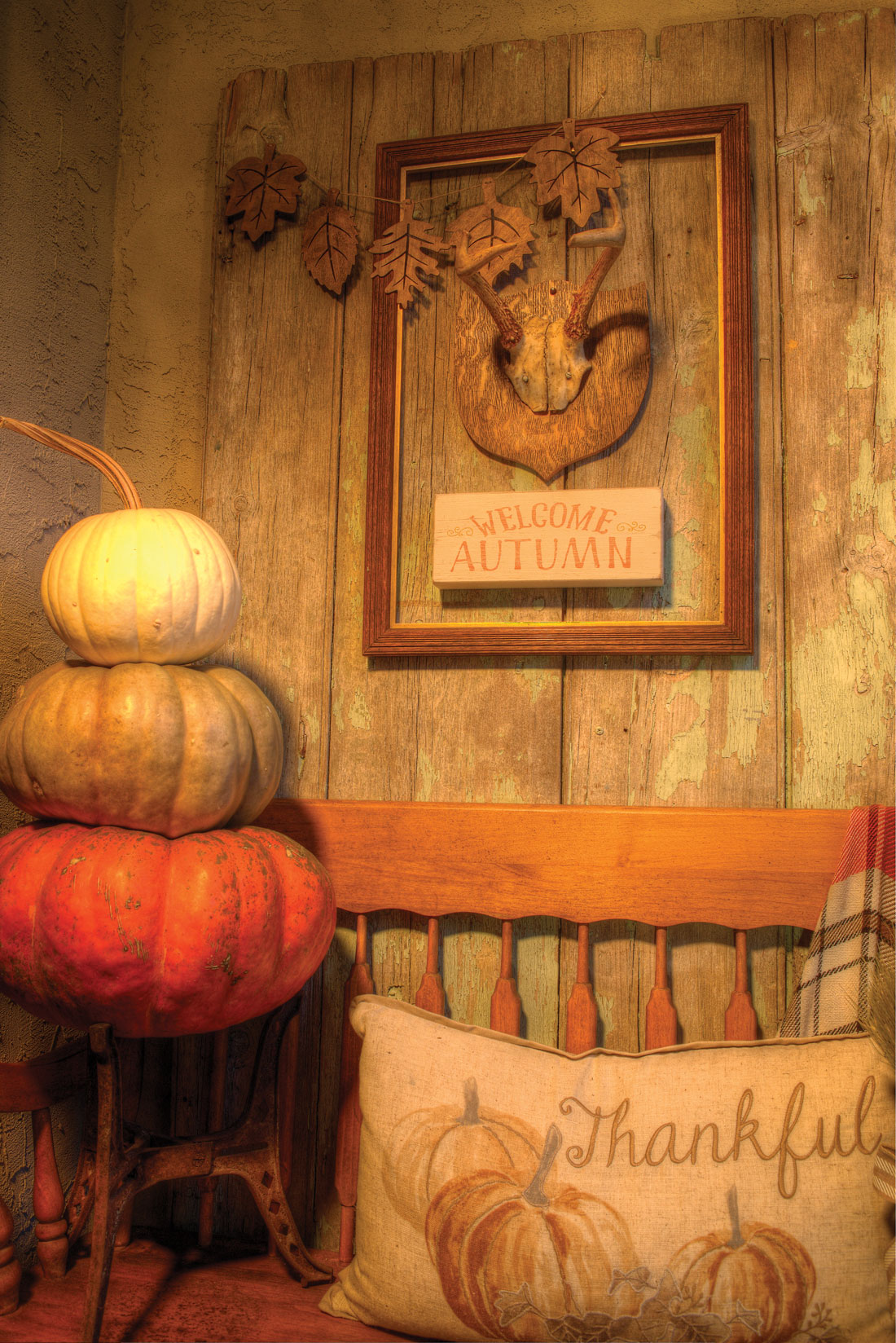 Stacey combined pumpkins and several of her finds to create a warm welcome beside her front door.

Henrys’ also made its retail customers happy by making a self-serve plant table available at the entrance to the farm. “It was an experiment,” says Stacey.

Indeed, Stacey’s canvas is her home. She’s the self-professed queen of thrift. “You’re not going to find much that’s new here,” she says. Boho is her style. Her home is a treat for all the senses (there is always a wonderful scent in the air).

The adventure begins at the entrance to the house, where what appears to be Italian tile covers the small porch. “Oh, I stenciled that,” Stacey says. (I had to touch it to make sure.) Inside, neutrals comprise the color scheme. Plants abound. Tables are topped with an interesting array of found items. “If I see something I like, I buy it and find a place for it later,” she explains. 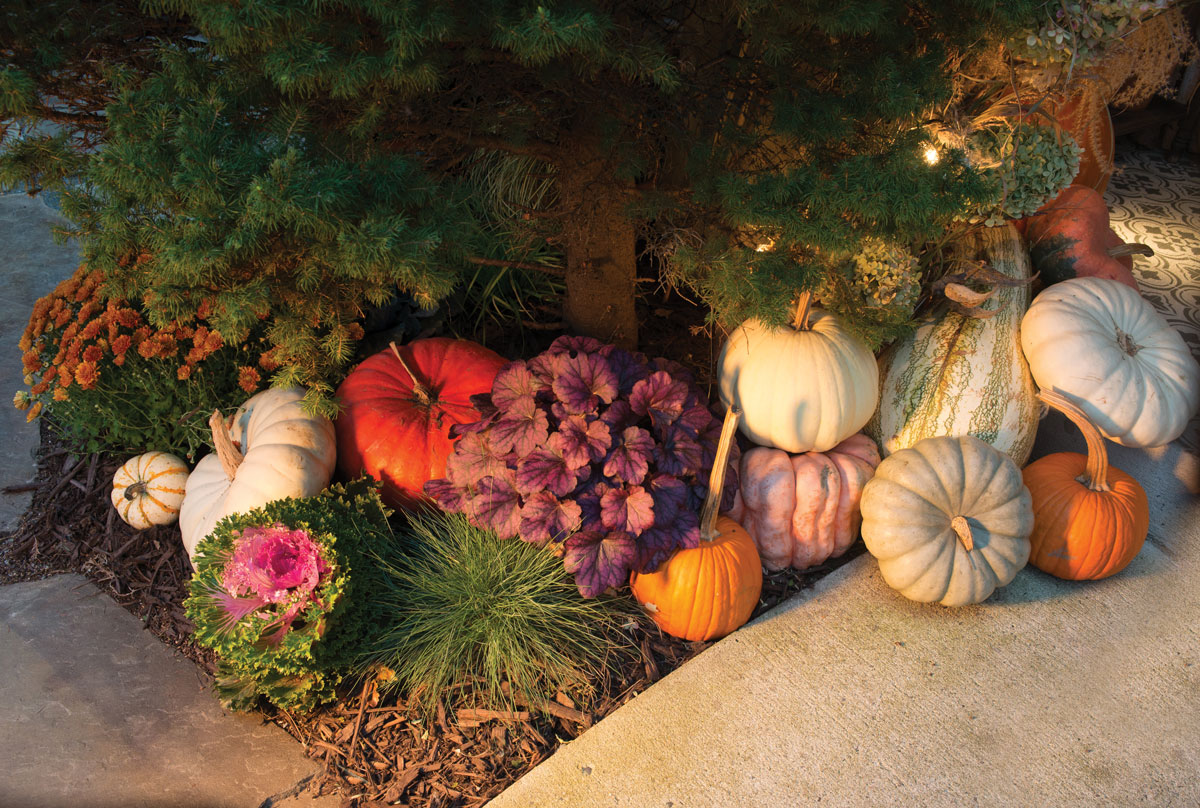 There isn’t a piece of new furniture to be found – everything was found and/or repurposed, creating an interesting and eclectic mix of styles. Her travels will take her as far as Philadelphia in search of a Facebook Marketplace deal.

Throw pillows are a passion and she searches brick-and-mortar stores and online sites for colors, patterns and textures that strike her fancy. “For my 50th birthday, I didn’t want a party,” she explains. “I told Ron [her husband] that all I wanted to do was spend the day exploring and antiquing. It was a perfect day!”

Stacey and Ron might best be described as kindred spirits. Stacey formulates the ideas and Ron makes them happen, thanks to his construction skills. Ron has grown accustomed to helping Stacey with projects and seeing her bring her latest “find” home to be repurposed. “We like to do a major outdoor project every year,” Stacey notes. In 2019, they created a stone-lined patio at the front of the house that appears to have always been there. This year, they turned their attention to the backyard and installed a fire pit and seating area beside a grove of trees. Stacey plans to further enclose it with artful landscaping. An earlier project saw them create a fence-enclosed, raised-bed vegetable garden. Ron also built a rustic potting shed for Stacey. “Our projects are definitely a team effort,” she says. 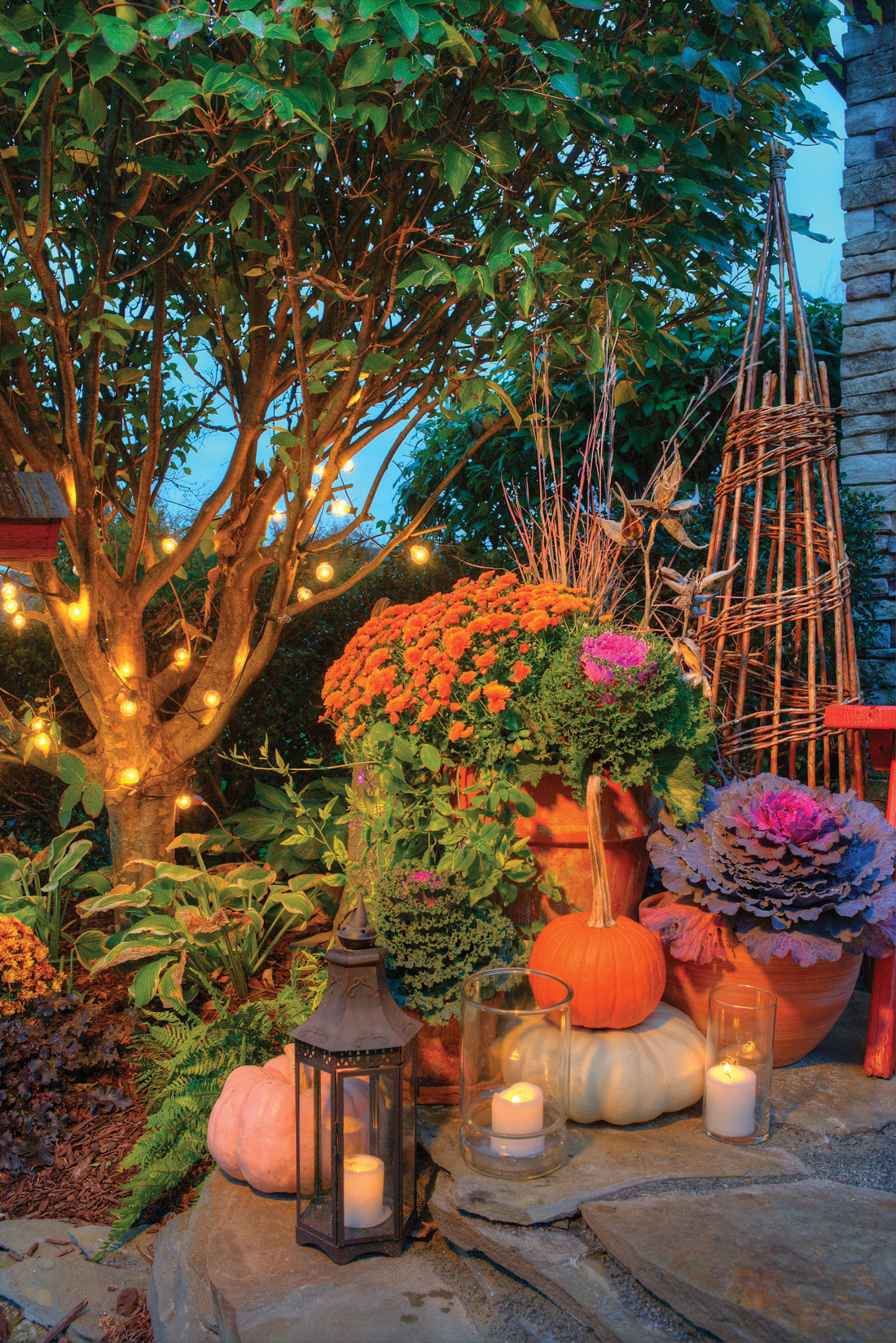 Stacey buys 80 to 100 pumpkins and gourds each fall. Here, some varieties combine with fall florals and ornamentals to create a colorful display on the patio. If guests are coming, the area glows with candlelight.

Their most ambitious project was repurposing the deck at the rear of the house. “You couldn’t use it during the day, because it was always in sun. It was just too hot out there!” she remarks. So, Ron transformed it into a three-seasons room by adding walls and a roof. Stacey created a secret garden beneath the space. An adjacent water garden provides the sounds of moving water and resident frogs. It’s the perfect place to laze away a summer day. When the weather begins to turn chilly, plexiglass window panes are popped into the window frames. “We can be out here in all but the coldest months,” Stacey says of the cozy and comfortable space that exemplifies her style. The plants do so well here that it has inspired her to put a backyard greenhouse on her wish list.

While the interior spaces of the Toomeys’ home are a study of neutrals, the outdoor environs are anything but – a kaleidoscope of color paints the landscape. While she hates to bid farewell to summer, Stacey begins the transition to fall in mid-September. “Little by little, I’ll start to accumulate things,” she notes. 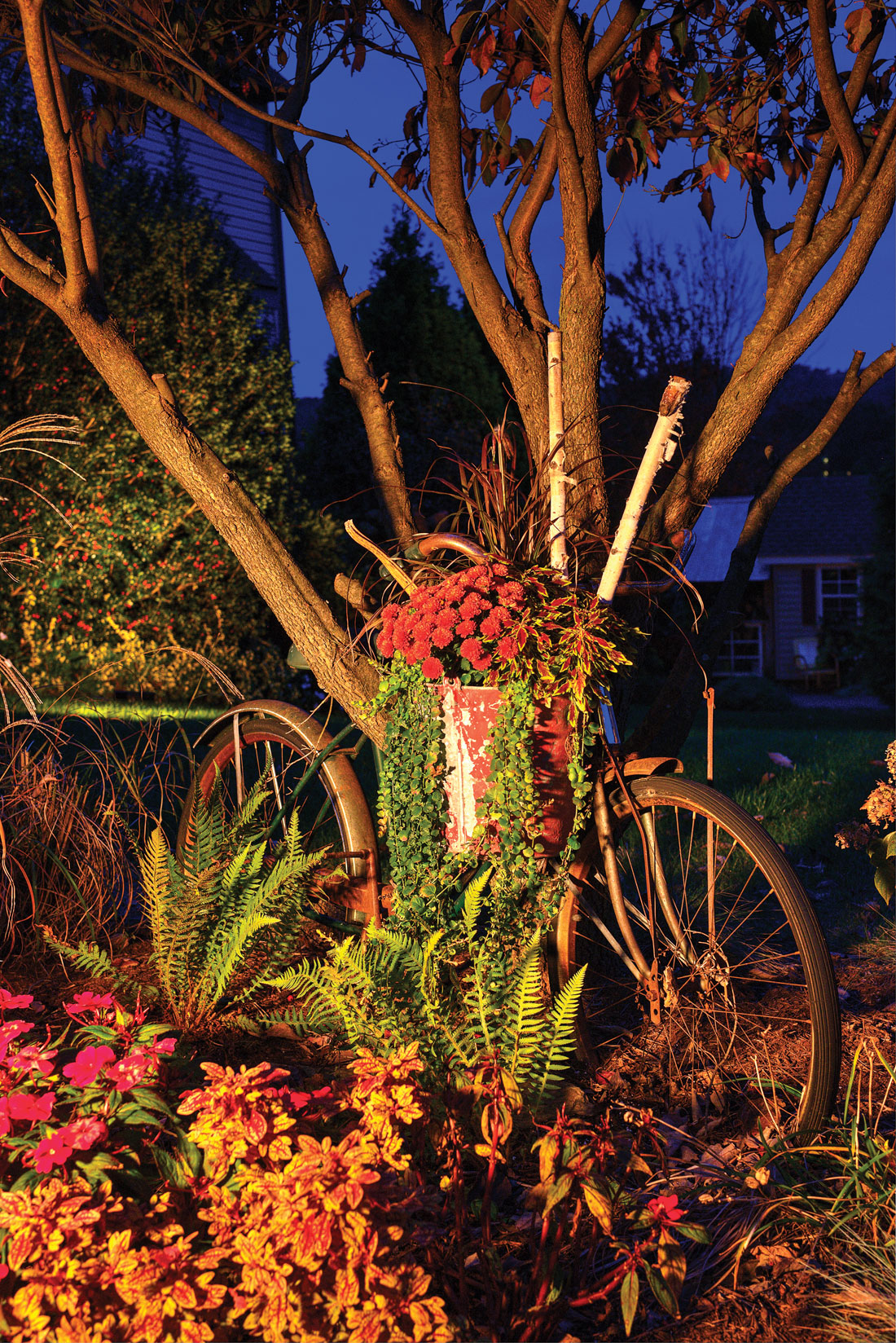 An old bike is put to use as a “container” garden.

Pumpkins and gourds are the backbone of the display. “I’ll buy 80 to 100 pumpkins and gourds each season,” she explains. She sources them from farmstands across Lancaster and York counties. Ron will even call her during his travels to say he saw some prime specimens and ask if she’d like him to bring some home. 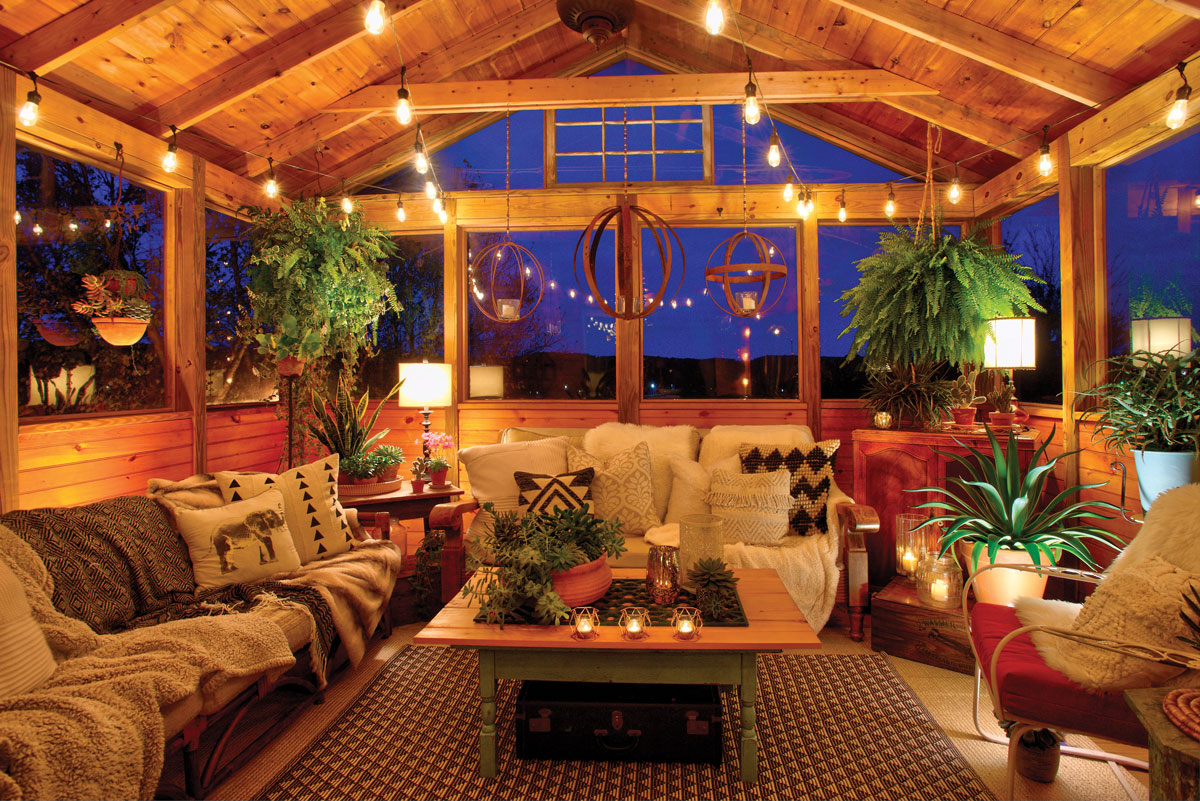 What was originally a deck was transformed into a three-seasons room by Ron. The comfy and welcoming space is furnished with Stacey’s repurposed finds and accessorized with plants, interesting objects and her favorite throw pillows.

Once the pumpkins and gourds are in place, she begins to add plants and containers. “It’s all about layering,” she says.

Last year’s highlight was an arch at the entryway that was comprised of cornstalks, ornamental grass, birch twigs and dried hydrangea blooms. White lights illuminated the structure. 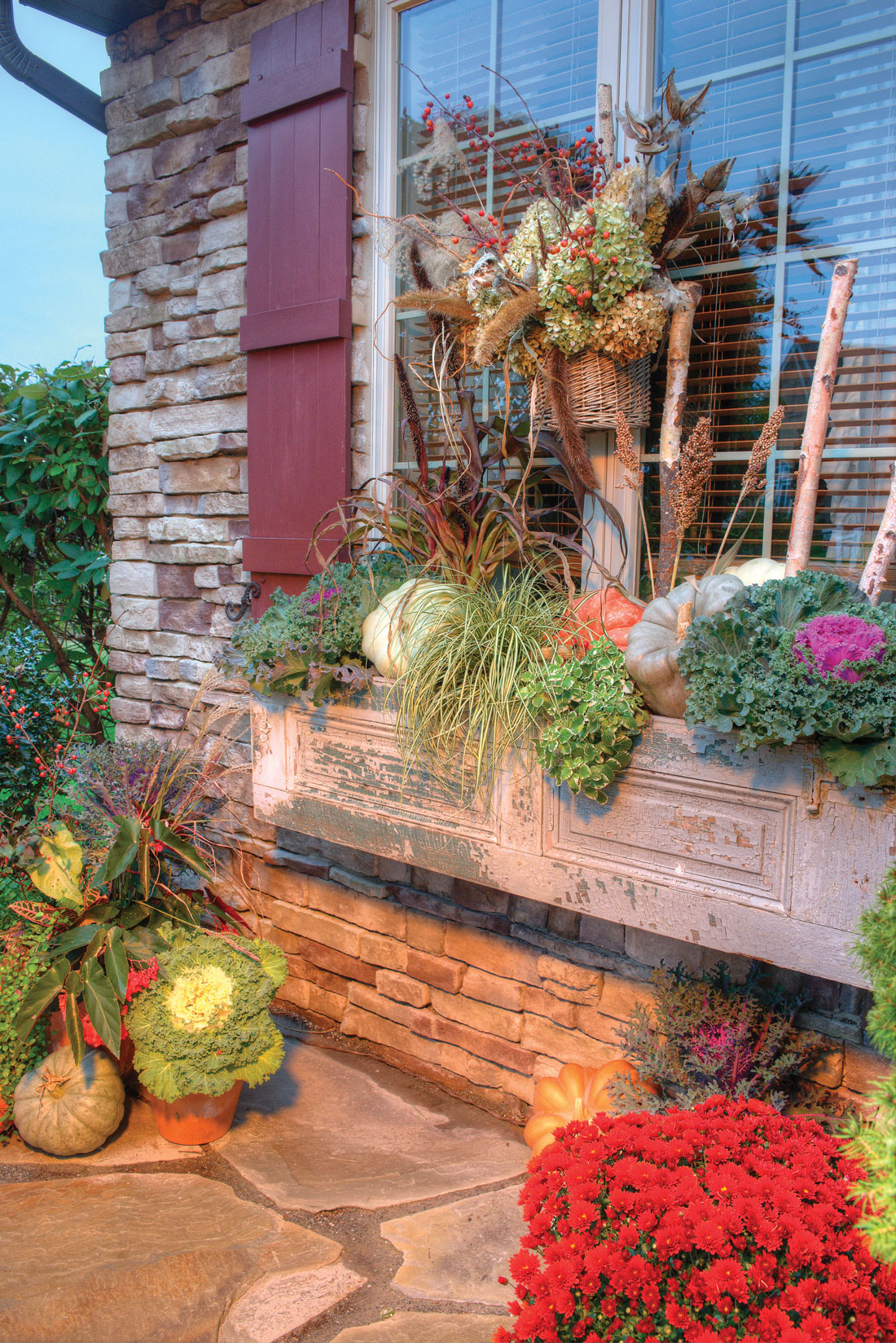 Oversized pots filled with plants such as ornamental cabbage and kale, heuchera (coral bells), ornamental grass, croton and even small evergreens bring color, texture and height to the landscape. Similar plantings filled the window box Ron crafted from old shutters. Stacey’s love of repurposing things is evident, as found items such as an old bike, gate and washtub provide the backdrop for her displays, which weather well and remain in place until mid-November, at which time Stacey transitions into holiday mode. 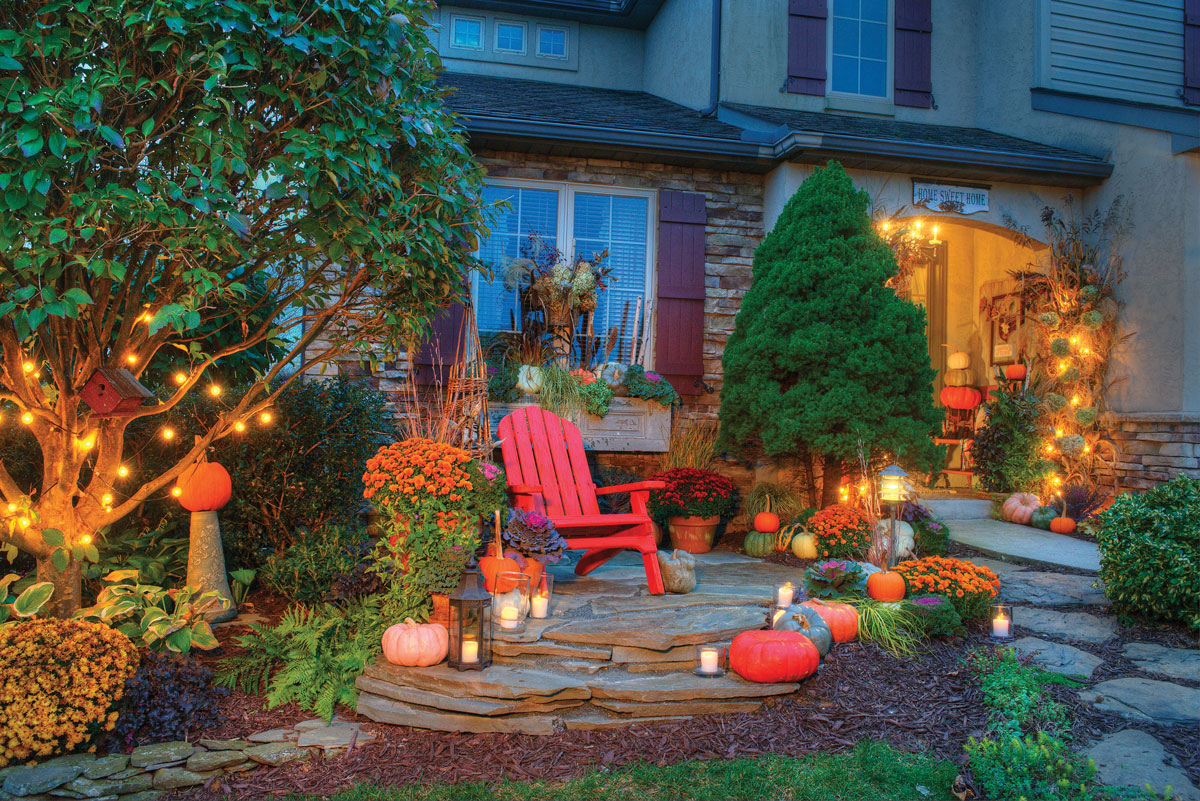 The patio at the front of the house was the Toomeys’ major outdoor project for 2019.

What was originally a deck was transformed into a three-seasons room by Ron. The comfy and welcoming space is furnished with Stacey’s repurposed finds and accessorized with plants, interesting objects and her favorite throw pillows.