If you think a fundraiser that benefits the studies of science, technology, engineering and mathematics sounds like a staid event, think again. The North Museum’s annual Cosmic Bash is one of Lancaster’s most exciting displays of creativity, thanks to a munificent wizard, his equally dedicated and creative wife and an inspired team of volunteers and staff. 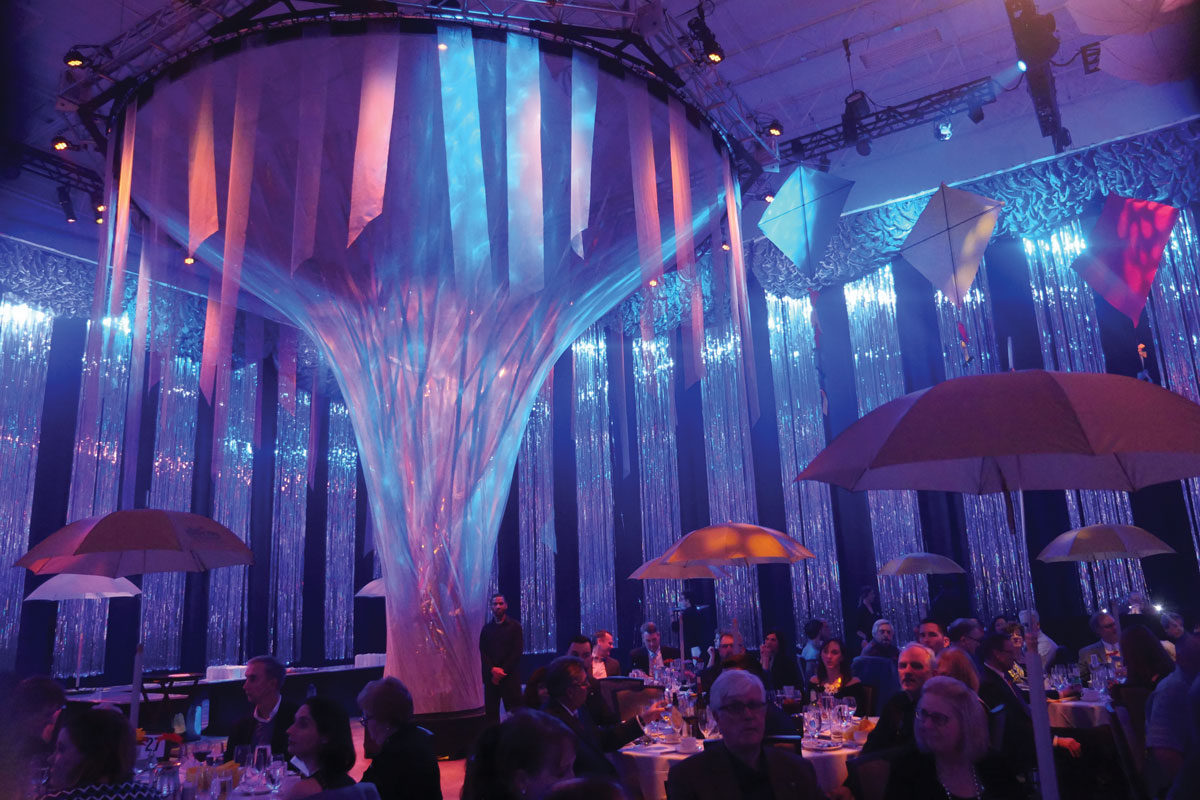 The weather theme in 2018 included 150 umbrellas and a dramatic 25-foot moving tornado. The fabric tornado was created by ATOMIC’s set-construction team in their Lititz facility. 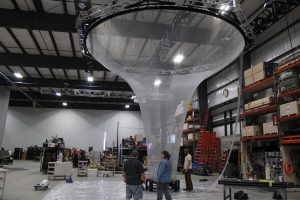 At the corner of College and Buchanan avenues in Lancaster, a hive of activity sits behind the stately brick walls of the North Museum. A star-gazing planetarium, a full-size model of a 200-million-year-old dinosaur and a room full of live critters including snakes, tarantulas, lizards and toads are just a few of the fascinating exhibits offering close encounters with 500 million years of science and nature. “It’s a gem of a museum,” says Executive Director Andrea Rush, “and we want to share the riches of Lancaster County.”

As with all nonprofit organizations, fundraising is vital to the North Museum’s survival and ability to extend its mission to educate future generations about the opportunities that lie in STEM-based careers – those who will continue to value its world-class exhibits and experiences as adults. “Our community-education programs look to create a rational career exploration of STEM jobs,” says Andrea. Additionally, the programs “serve to slow the ‘brain drain’ of STEM-related talent from our community.” Such goals are important for many Lancaster County-based businesses who rely on a technology-educated workforce for their growth and success. 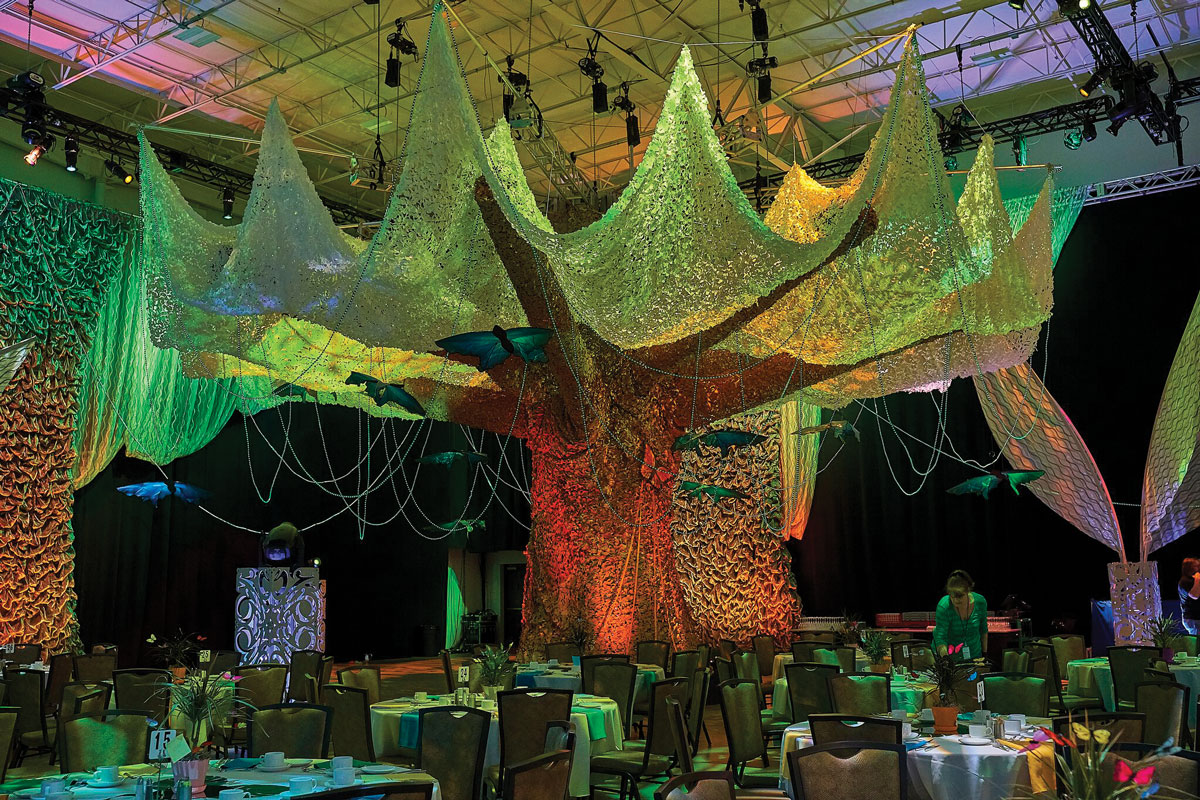 Joined by a team of community volunteers, Tom and Pippa have annually developed a fundraising event that first looks at what’s in the museum and then translates that into a workable theme.

Thanks to the creativity of Tom, Pippa and ATOMIC’s designers, science and nature have never looked so glam. Using the spacious event spaces of the Spooky Nook Sports complex, Tom and his team transform the Olympic Hall’s “blank canvas” of white walls and 30-foot ceilings to execute a science-themed display that Andrea describes as “awe-inspiring” for the Cosmic Bash’s 400 guests. Beginning with a Night Under Northern Lights theme in 2016, Tom and Pippa have developed such themes as Amazon Rainforest, Under the Sea and a weather theme that included 150 hanging umbrellas to create a cloud-like feel, and a 25-foot moving, suspended fabric tornado.

Inspired by last year’s 50th anniversary of the lunar landing, Cosmic Bash 2020 will boldly go where no Bash has gone before: to outer space. Creating Cosmic Bash Goes Galactic  began months ago, with Tom and his ATOMIC design team imagining ways to interpret the established theme into a flow that incorporates all the party’s elements – the table layout of the sit-down dinner for 400, the bars, silent auction tables, stage and a breathtaking entrance. “The ATOMIC team works at finding unique ways to use the products on our shelves, while creating some unique custom ‘wow’ elements to set the stage,” Tom explains. Impactful elements, indeed. Past examples include a larger-than-life suspended jellyfish, huge rainforest leaves and a tropical tree canopy. 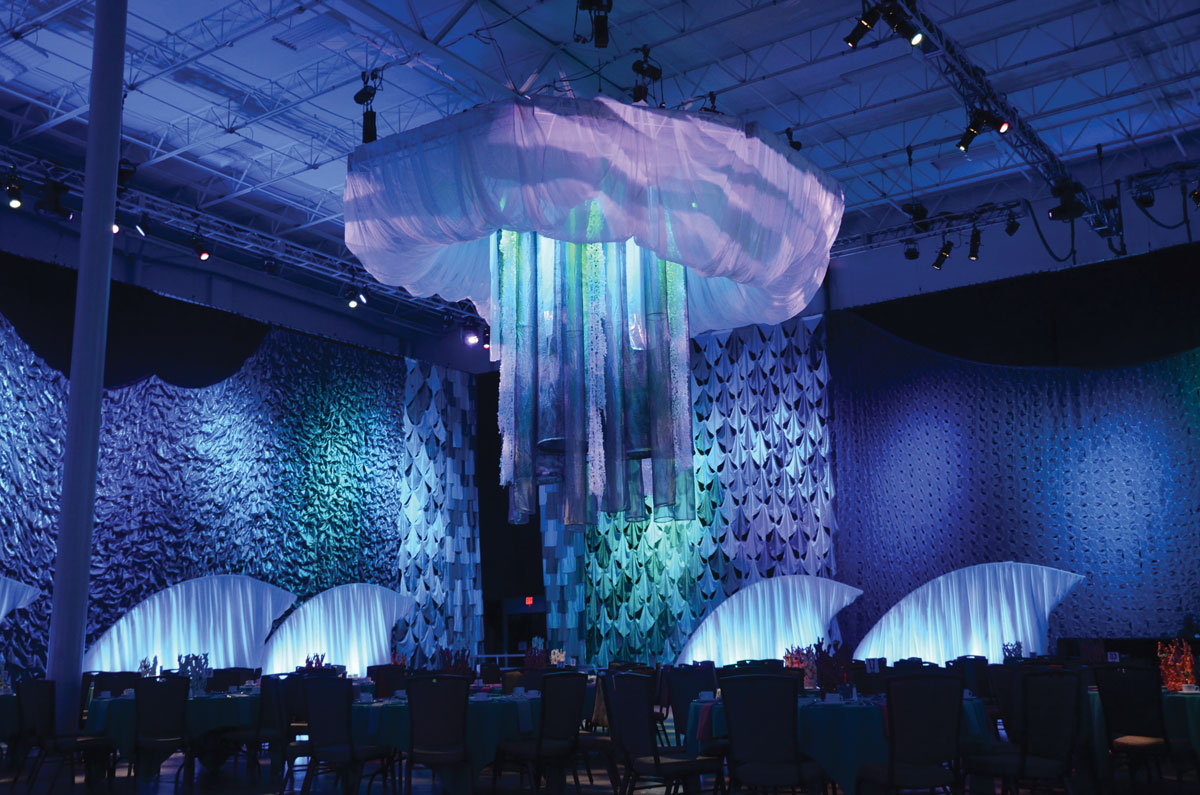 From 2017: The Under the Sea theme featured a larger-than-life jellyfish surrounded by waves crafted from fabrics and textural curtains.

From Tom’s hand-sketched ideas, ATOMIC designer Brie Rogers develops digital 3D models and renderings that provide ATOMIC’s set-construction team with the direction to create construction drawings of the custom elements to be built in its workshop. Among the plans are a replica lunar rover module for the DJ’s booth and a “floating” model of planet Earth. 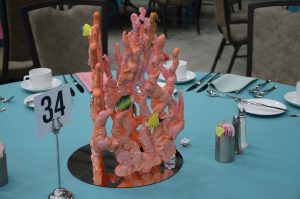 While Tom works on the overall large-scale elements, North Museum board member Pippa conceptualizes and creates the dozens of table centerpieces. Under the Sea featured faux coral and tropical fish.

When STRAY Production Services, another Rock Lititz-based company, brings in dramatic lighting, plus sound and video, the event comes to life. Andrea, who has worked in numerous major markets across the country, describes the Cosmic Bash as “the best event design I’ve ever seen. People attend just to see what Tom comes up with.”

“The museum’s mission is a great fit for ATOMIC because everything that we do is about bringing together technology and art, making STEM education incredibly important to us and our industry,” Tom observes. “The Cosmic Bash is an opportunity for us to offer our unique creative skills in a way that contributes to the success of both the event and the museum.”

“The Cosmic Bash is simply synonymous with Tom McPhillips,” says Andrea. “His heart, passion and talent continue to astound and amaze us all. We could not do what we do for the children in this community without ATOMIC.”

From 2017: The Under the Sea theme featured a larger-than-life jellyfish surrounded by waves crafted from fabrics and textural curtains.