What many people call the best brewery in the county started in a small space in a former shoe factory in downtown Ephrata in 2011. Eventually, owners Mike Price and Jon Northup needed to move as St. Boniface Craft Brewing Company grew in popularity. They found a former milk processing facility on Main Street and brought on Dain Shirey as a co-owner. Now, as they start production on their third line of canned beer, the brewery has reached into the Philadelphia market with its product.

St. Boniface is mostly well-known for four signature beers: Paideia, a single (Citra) hopped pale ale; 3 lb. IPA, originally named for the 3 pounds of cascade hops per barrel used in the brewing process; Libation, a big double IPA; and Hegemony, a stout easier to drink than pronounce (huh-gem-uh-knee). The brewery also runs an Offering series; these are seasonal and one-off beers Jon decides to concoct for visitors. Recently, the Offering series featured a festbier, a pilsner and a cream ale.

The story of St. Boniface – the man, not the brewery – is rooted in 7th century Europe. He is considered a patron saint of brewing, and it is said he converted worshipers of Thor by felling a sacred tree while not bringing down the wrath of the god upon himself. He brought Christianity to Germania and is called the “Apostle of the Germans.” St. Boniface’s first name is Winfrid or Wynfrid, which also happens to be the name of the brewery’s latest flagship brew, a low ABV English ale. Wynfrid was first created to please the palate of Bulls Head Public House’s owner Paul Pendyck. The English expat loves low ABV brews and wanted to have a local selection on tap at his Lititz pub.

Back in Ephrata, St. Boniface – the space – recently underwent a redesign. The bar was moved back to accommodate the growing number of thirsty guests, and a pizza oven was installed to alleviate the need for parking lot food trucks. The 15-bbl system keeps up with demand as many visitors simply stop in to fill growlers to take home. 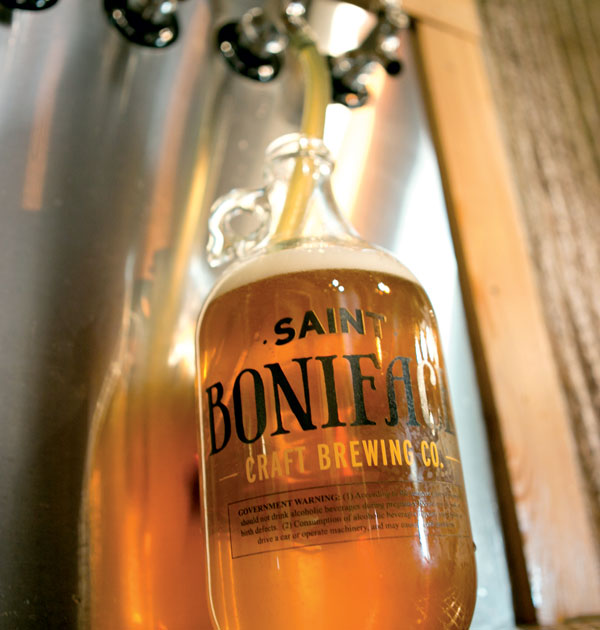