The coronavirus lockdown has provided an opportunity for us to spend more time in our gardens. Weeding is an expected chore, obviously. But, analogous to a virus, some weeds are far more “contagious” than others. I’d caution you to be aware of several annual weeds that are attacking the resilience of our treasured plantings and native forests. 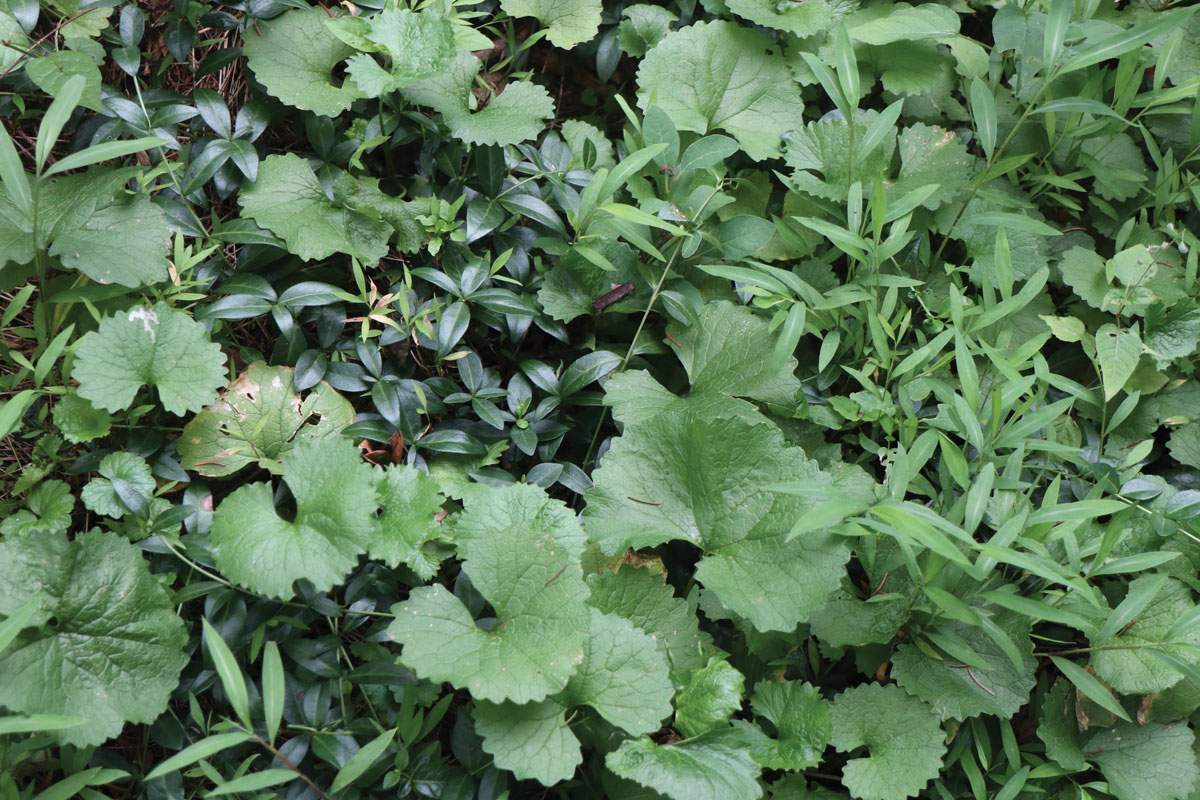 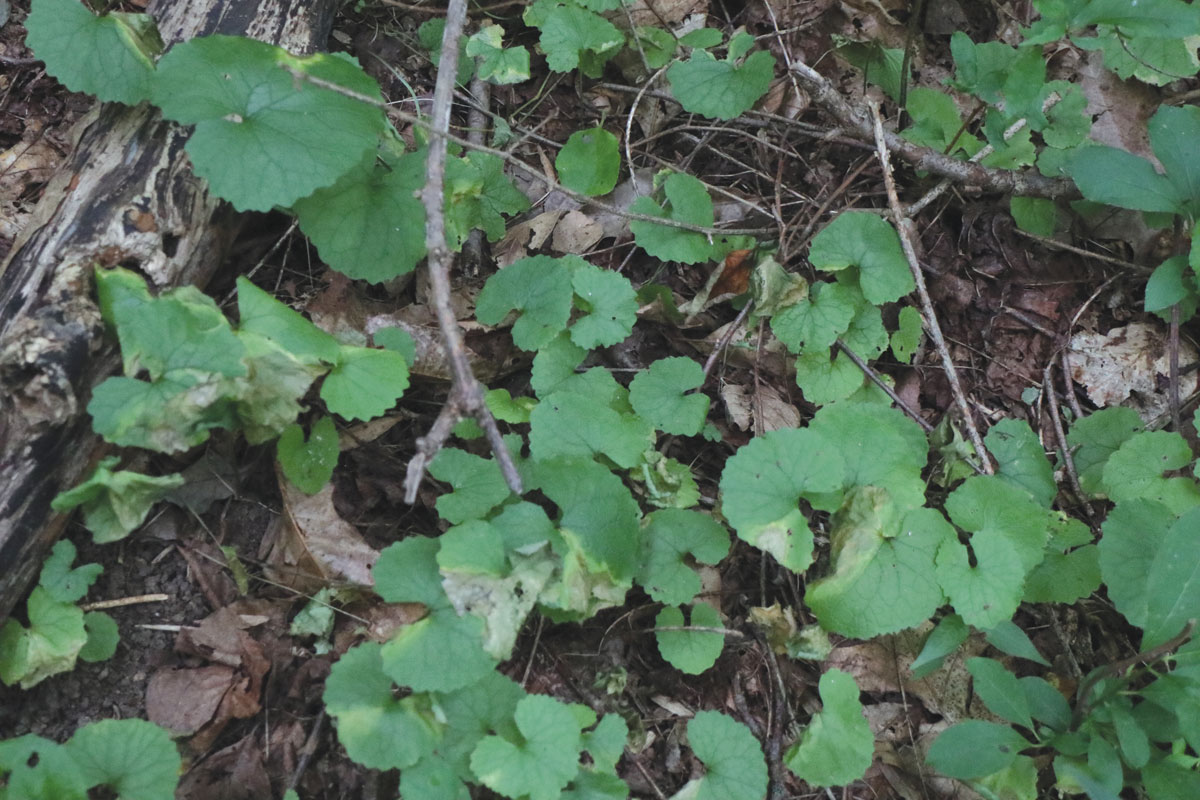 Garlic mustard is a biennial, which means in the first year of growth it forms rosettes of kidney-shaped leaves with scalloped edges that remain green throughout the winter. It then matures into a 1- to 3-foot-tall flowering plant the following spring. The 4-petaled white flowers self-pollinate. All parts of the mature plant, including the roots, give off a garlic-like odor.

The single-stem flower stalk elongates into a spike-like shape, maturing to brown and containing two rows of small shiny-black seeds that release by mid-summer. A single plant can produce hundreds of seeds that can scatter several yards from the parent plant. A particularity vigorous plant reportedly produced as many as 8,000 seeds. The seeds, which are easily spread via animals, people, vehicles and by water, can last in the soil for at least 20 years. 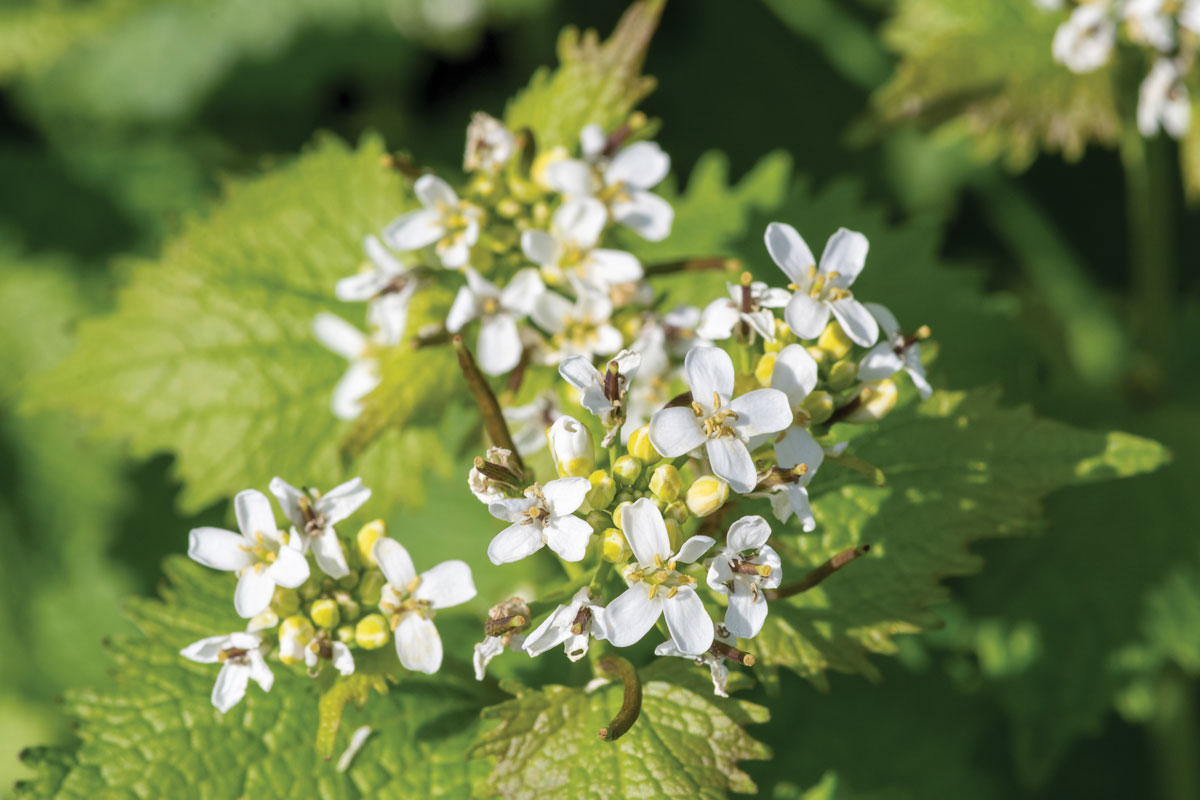 Garlic mustard is extremely hard to control once it reaches an area and easily out-competes native vegetation in the understory of the forest, whether in densely shaded or sunny sites. Plant stands can produce more than 65,000 seeds per square yard, changing the structure of plant communities. It is also allelopathic, which means it releases chemicals that inhibit the growth of other plants, as well as mycorrizal fungi that are needed for healthy tree growth. Some researchers suggest that garlic mustard may in time affect the tree composition of entire forests by creating a barrier that some seedlings, for example, the chestnut oak (Quercus prinus), may not be able to overcome.

It is very difficult to eradicate garlic mustard once it is established. Be familiar with the first-year foliage in order to attack infestations early and, with the second-year flower, to pull it before seed sets. Hand-pulling is effective if the entire root is removed. (This is best done in the spring, when the soil is soft.) This will have to be continued for up to five years to deplete the soil seed bank. Obviously, this works only in small pockets of plants with a recent invasion.

Flowering or seeding plants should be put in a bag and discarded. Be sure to clean off your boots, clothes and tools to avoid carrying the tiny seeds to new sites.

String trimming will not control it since the remaining root crowns will grow new stems. The whole plant must be pulled. Infested sites should be monitored every year for new plants. 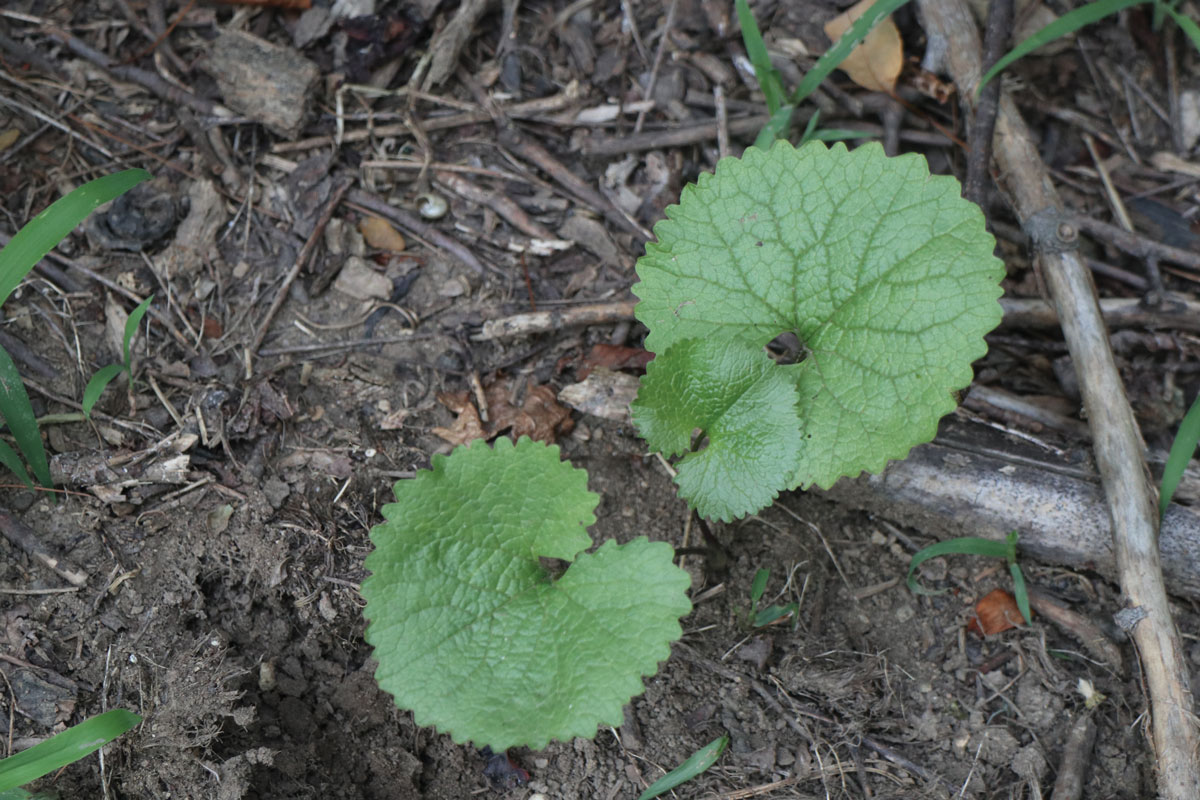 Chemical herbicides are effective for controlling in areas too large for removal by hand. Naturally, they can only be applied in isolated dense stands where other desirable plants are not present. These should always be used according to label instructions and local regulations.

The best method for controlling garlic mustard (or any other invasive plant) is to prevent its initial establishment. This means minimizing disturbances of any kind in the forest understory.

Garlic mustard has no known wildlife benefits and it is toxic to the larvae of several rare butterfly species (Since you asked: Pieris oleracea and Pieris virginiensis) that would be fine on native mustards.

Garlic mustard is native to Europe, Asia and parts of Africa. It is one of the oldest spices used in Europe and has been identified in pottery dating to 4,000 BCE. In the 17th century it was recommended as a flavoring for fish and lamb or for use in salads. It was brought to our shores in the 1860s for medicinal purposes and as a seasoning. Even today the chopped leaves have unfortunately been recommended for mixed salads or use in pesto sauces. 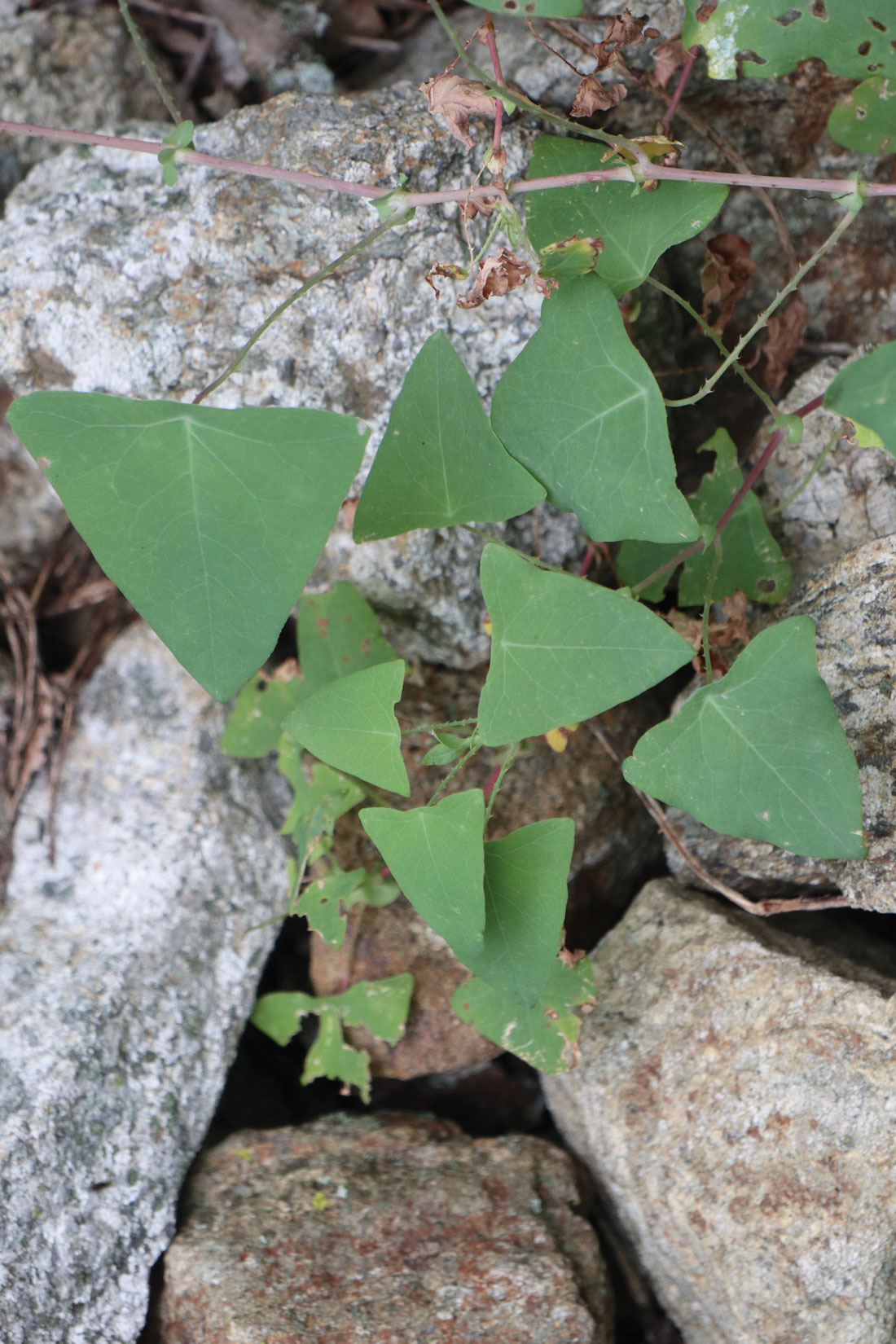 This is an extremely invasive annual vine that grows up to 6 inches in 24 hours and forms a dense mat that will cover and smother shrubs and even trees. Not only does the mass of foliage block sunlight from plants, the weight affects growth and eventually kills them. The vine can grow 20- to 30-feet long, forming a dense, tangled blanket of intertwined stems.

It is found in any disturbed area where openings for sunlight appear: reforestation areas, nurseries, rights-of-way, fence lines and edges of woodlands. In Pennsylvania, it has also been a problem on Christmas tree farms.

Mile-a-minute is easy to identify. The pale-green leaves have an equilateral-triangle shape. The stems appear very delicate but they and the undersides of the leaves are covered with barbs that make it such a skillful climber. The barbs are “recurved,” which means they point down, enabling them to grab and hold onto your clothing. Round leaf-like structures, called ocreae, completely surround the stems at the base of the leaves. The flowers and later the seeds grow from these. The small white flowers are hardly noticeable but develop into clusters of intense blue, berry-like 1/4-inch fruits, each enclosing a single seed. 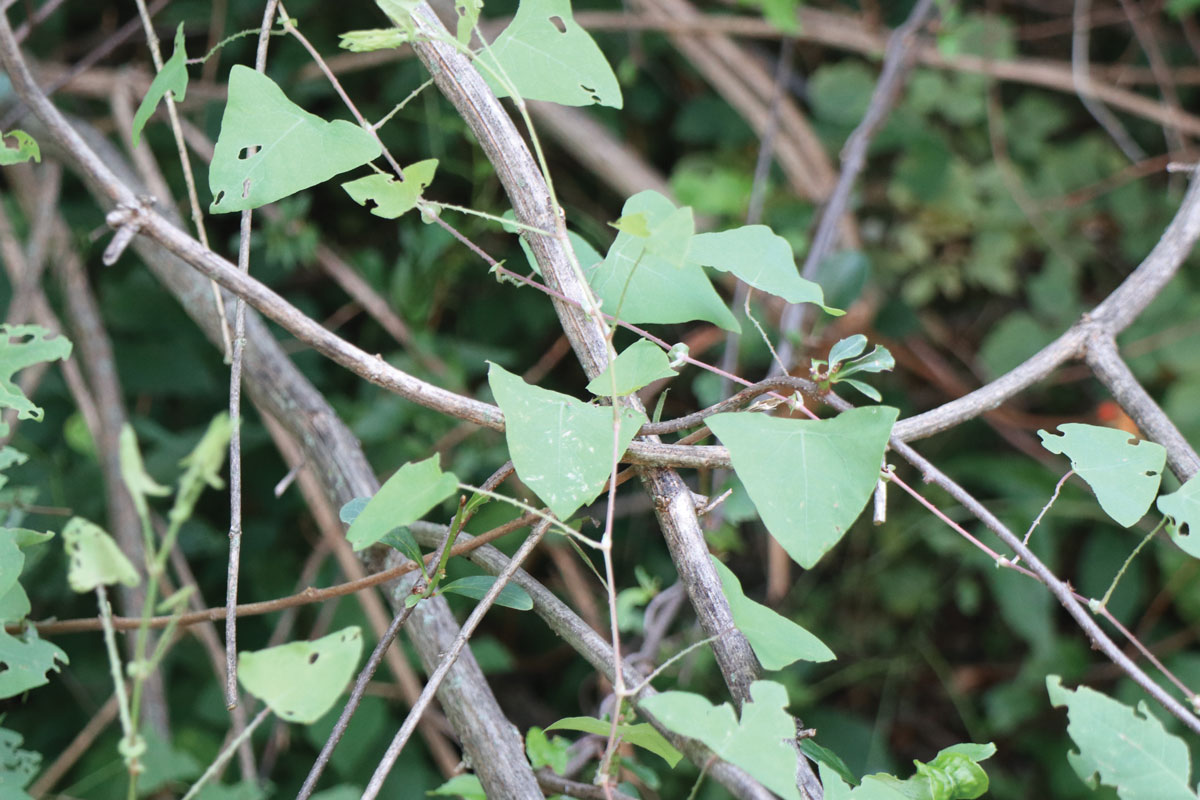 The vine is self-fertile, meaning it does not need a pollinator to produce fertile seeds. It can continue to flower and produce seeds from June into October. An individual plant can produce up to 40 seeds. Although the vines are killed by frost, those seeds are viable in the soil for as long as six years thanks to birds that carry the seeds long distances, dropping them under utility lines, fence lines and other perching locations. Viable seeds have been found in the scat of deer, chipmunks and squirrels. They are also transported short distances by ants. There’s more: The buoyant seeds can float for many days in moving water. Thus, vines hanging over a waterway can distribute the seeds throughout a watershed. Seeds can also be transported on the tires of farm implements and logging equipment.

There is a weevil (Rhinocominus latipes) that specifically feeds on mile-a-minute. It lays its eggs on the leaves and the larvae bore into the foliage. The life cycle is about a month, allowing several generations in one growing season. The damage can stunt the plants and can kill them. 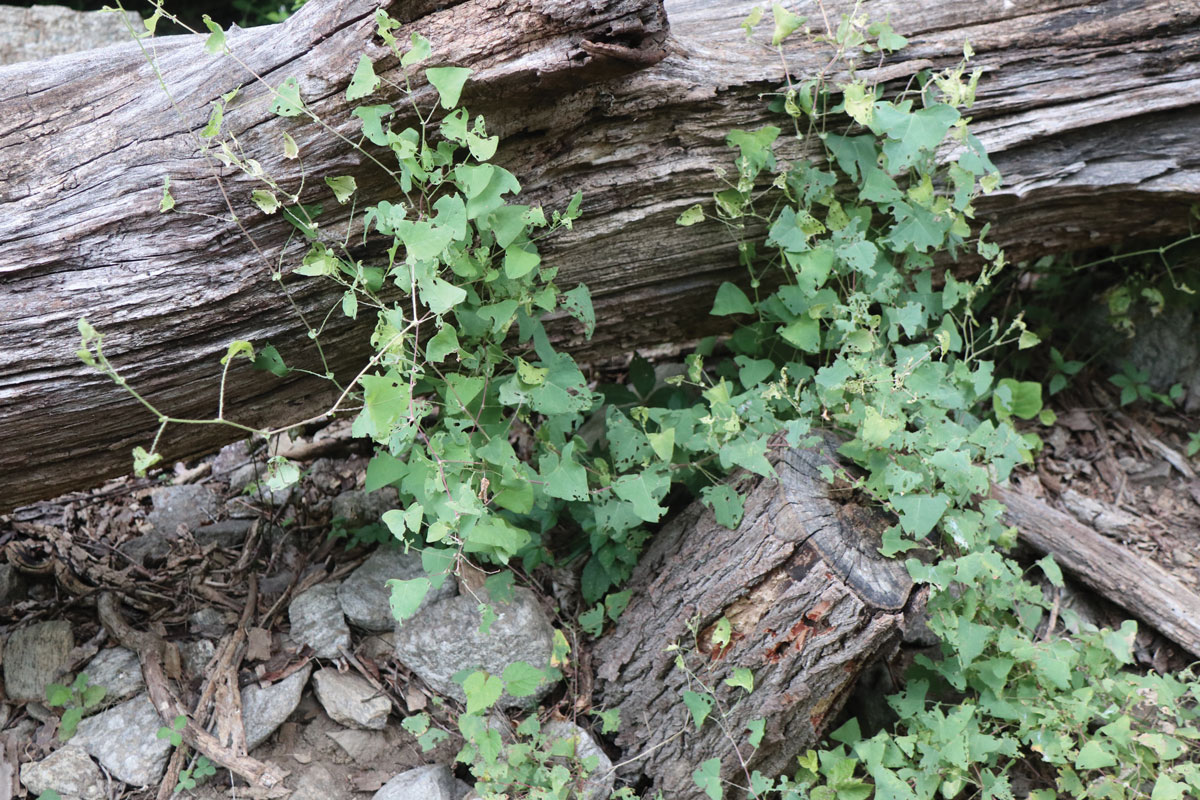 Hand-pulling or mowing young plants or new infestations is the most effective control. The trick is to get it before it sets seed. As the vine continues to grow, be sure to wear heavy gloves! Late in the season, disturbing the vine will simply cause the fruit to be dropped. If possible, it is best to burn the pulled plants. One must remove the vines before the fruit is formed.

Herbicides are effective but the problem is that the vines are often covering treasured ornamentals. Goats and sheep will graze on the vines in uncultivated open fields. 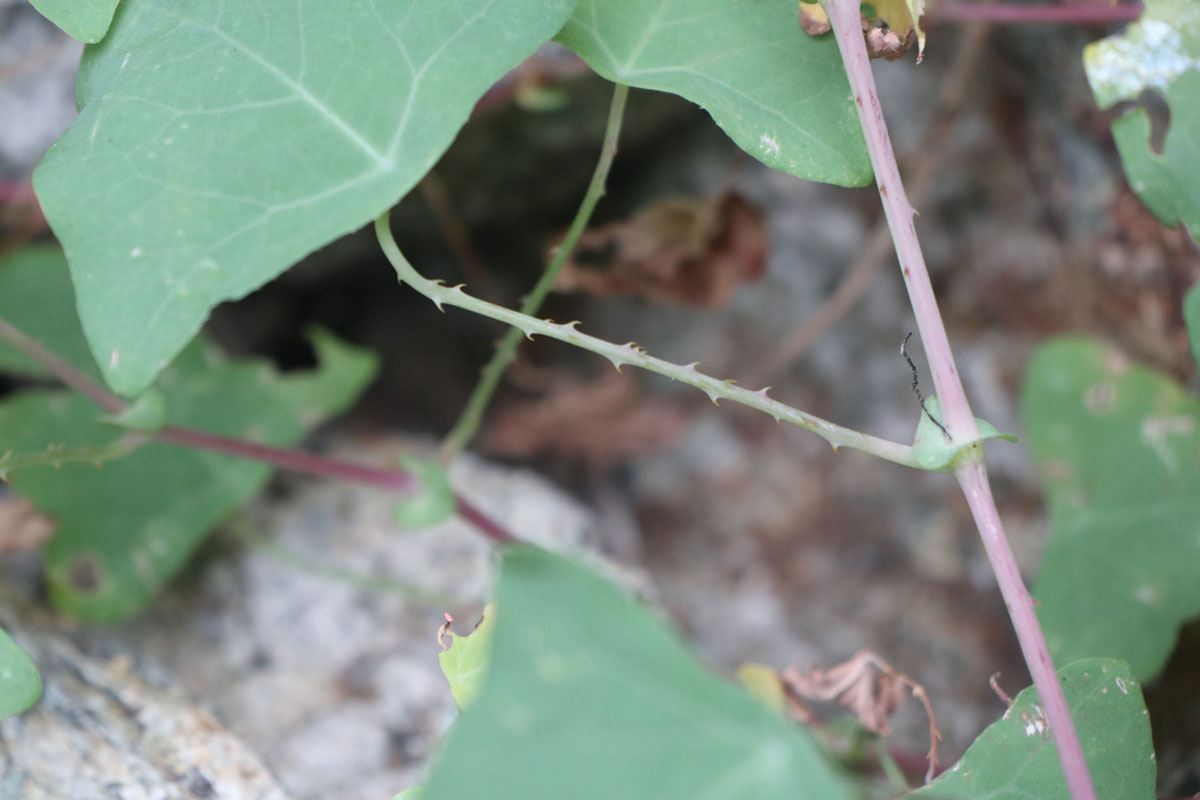 The vine is related to buckwheat and first made its way to neighboring York County from India and eastern Asia in 1930, arriving in imported rhododendron nursery stock. It is now found in all the Mid-Atlantic states and into southern New England, Ohio and parts of North Carolina. It will likely continue to extend its noxious way through cooler areas since the seed requires at least eight weeks of cold stratification.

It is reported to be edible. The leaves and shoots can be eaten raw or cooked. 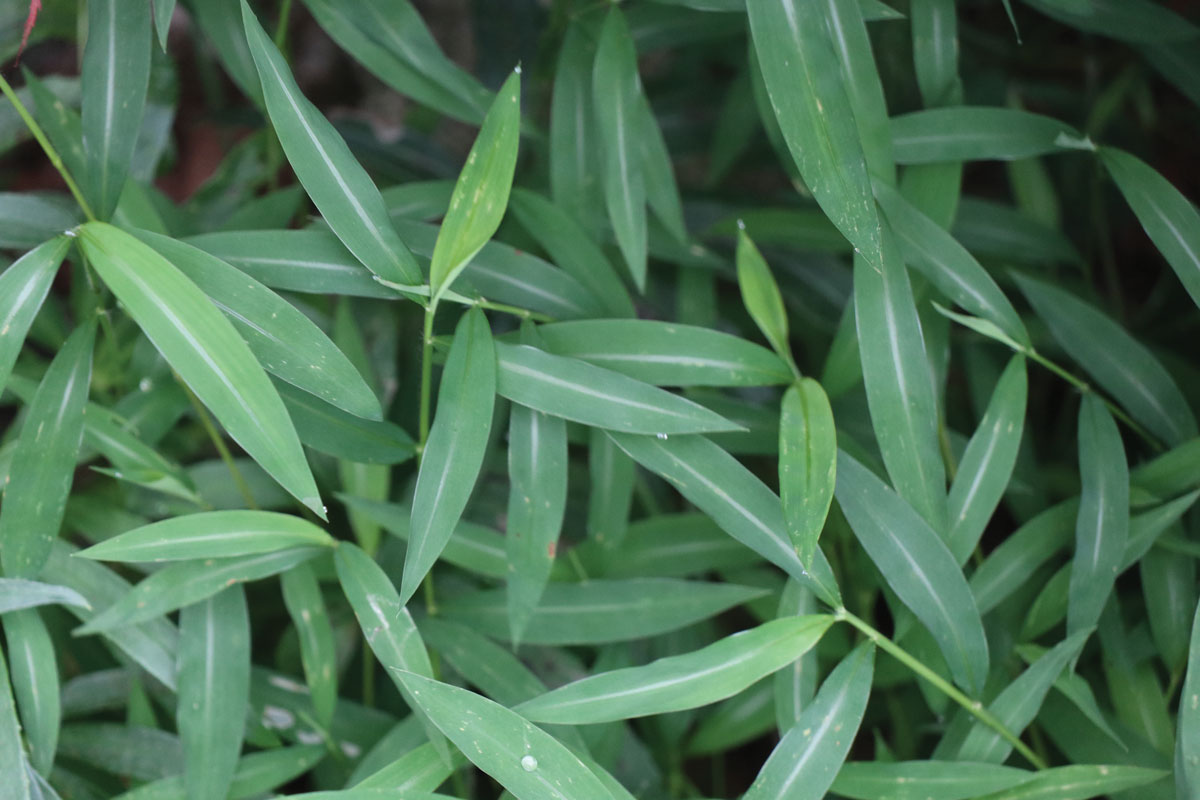 This is another annual that is native to Asia. I first noticed it in my garden only a few years ago but now it is on the increase everywhere. From July on, it slowly dominates my borders and everywhere I look nearby: forests, wetlands, meadows, roadsides and wild areas. It might invade any area – full sun to heavy shade – that is disturbed by tilling, mowing or foot traffic.

It is a bamboo-like grass that typically grows 1 to 2 feet in height in a branching, mat-like habit. The narrow leaves can be identified by a distinctive white midrib. It flowers late in the summer. As an annual, it reproduces by seed that is set late, from mid-September into October. One plant can generate hundreds of seeds that not only fall nearby but can be carried by rain water, contaminated hay, animal fur or on your gardening boots. The seeds remain viable in the soil for more than five years. 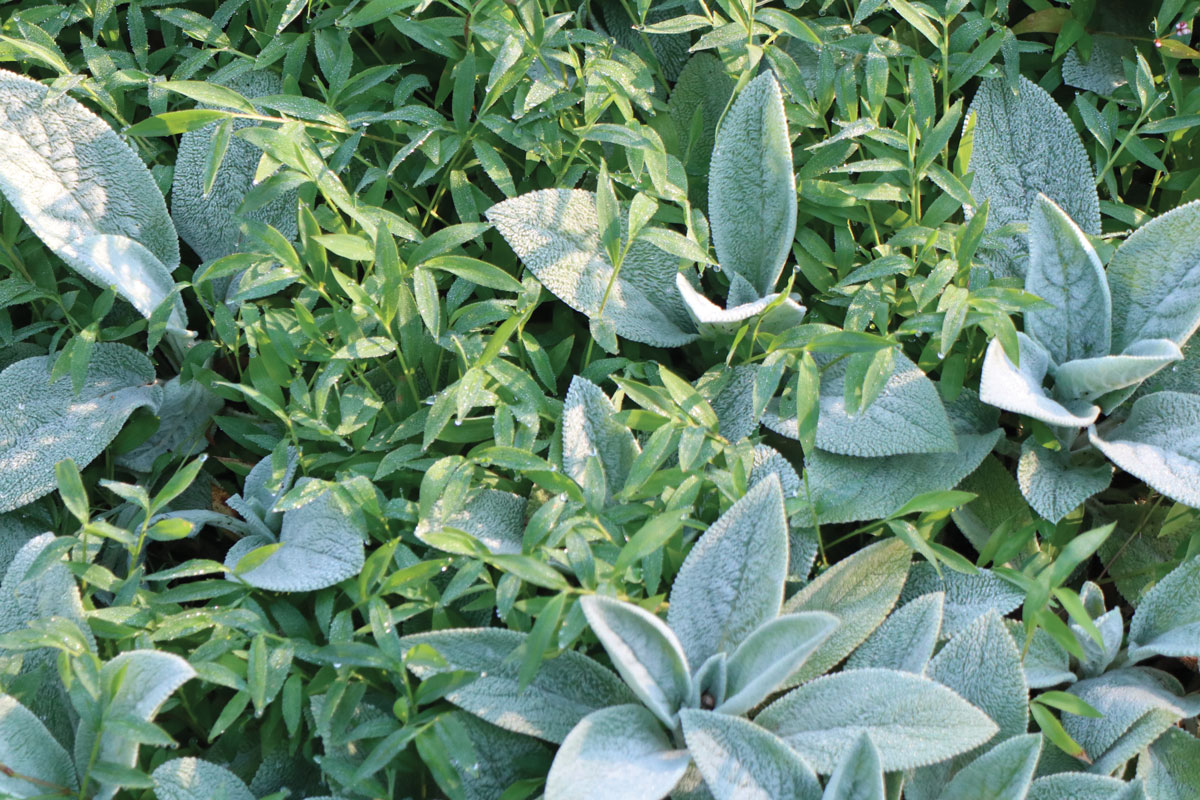 Sure, stilt-grass dies back with frost but heavy infestations turn into thick layers of dry tan-colored thatch that only slowly compost. Deer, horses, even goats do not eat it, allowing it to crowd out native vegetation and tree seedling in three to five years.

Hand-pulling is easy if the ground is moist because it is very shallow-rooted. It is best to do this when the plants are mature and easier to grab but have not yet set seed. In a smaller garden that is relatively protected from adjacent wild areas, it might be possible to get rid of it with several years of vigilance. Do not compost any plants with seed heads.

It is tempting to mow or line-trim sweeps of the grass early in the summer, but that only encourages branching, earlier flowering and seed production. 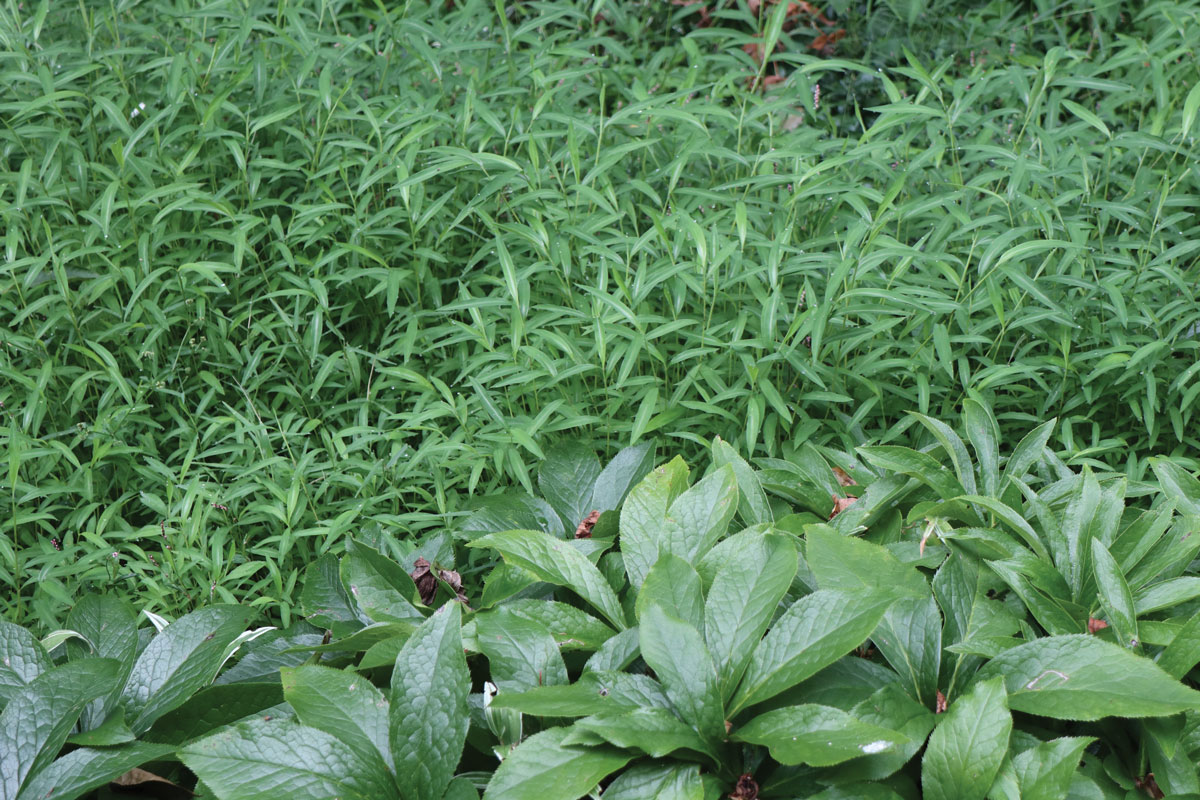 Preemergent herbicides labeled for crabgrass can be tried but must be spread early because stilt grass germinates earlier than crabgrass. Large, dense infestations without desirable plants can be sprayed with a systemic herbicide like glyphosate. There is a grass-specific herbicide called quizalofop.

Silt-grass was likely accidentally introduced early in the 20th century as a result of its use as a packing material for Chinese porcelain. It has colonized most of the eastern U.S.