One of our most valuable native trees, the ash, is being infected and killed by an imported wood-boring bug called the emerald ash borer,  Agrilus planipennis. The infestation, which has been described as a “modern-day ecological disaster,” brings to mind the so-called Dutch elm disease that wiped out another widely planted shade tree more than 50 years ago. 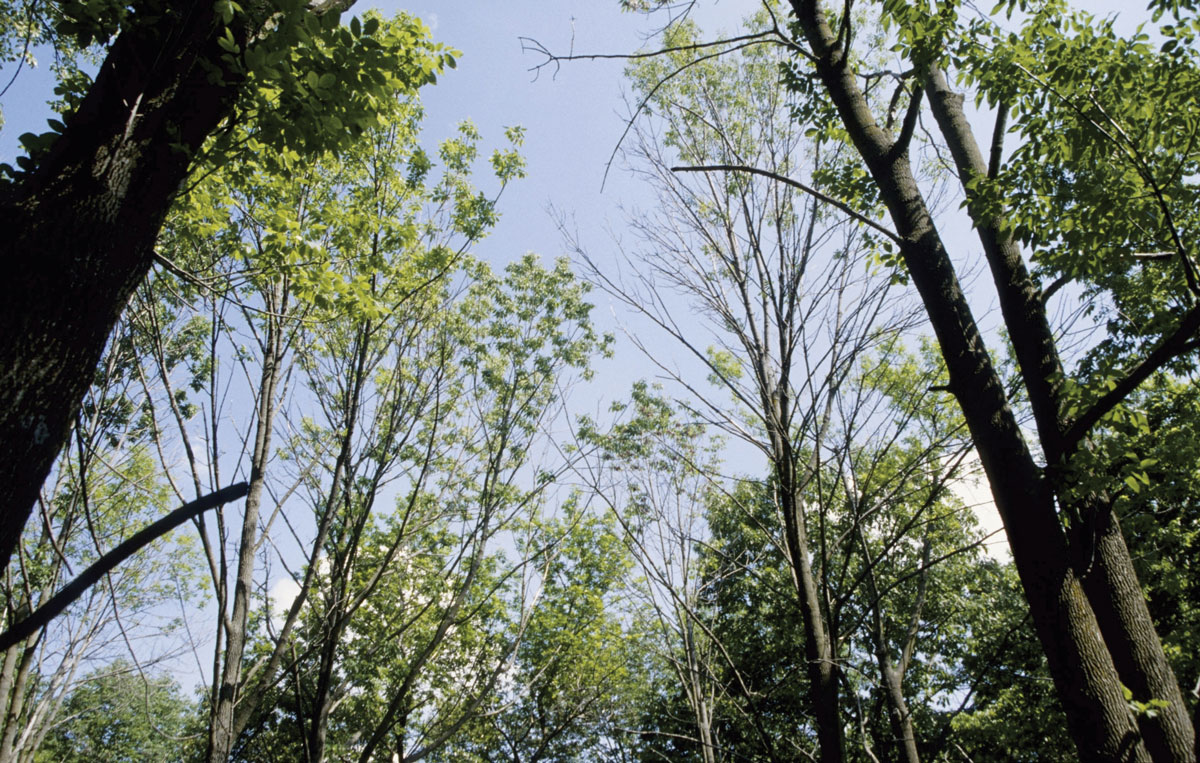 Readers have no doubt heard about the problem. The emerald ash borer attacks only ash trees. The larvae feed under the trees’ bark, eventually girdling and killing them within four years of infestation. The 1/2-inch long, metallic-green beetle, native to northeastern Asia, was first identified in Michigan in 2002. Since then, they have been wiping out ash trees over the eastern half of the United States.

They first showed up in Pennsylvania in 2007 and are now fully established. The bug is certain to kill just about all of the millions of ash trees found in our forests, parks and home lawns. Evidence can be seen along the region’s highways, which are now lined with the skeletons of dead ash trees. In my few acres of woods, all the ashes are dead or in decline. I have had several dead trees come down in winter storms and have preemptively removed three that would have caused damage to outbuildings or ponds if they fell.

Why should we care about the loss of one native tree species?

Various species of ashes are among the most common and widespread of our Pennsylvania native forest trees. Most of them are similar in appearance, with compound leaves arranged opposite on the stems (like maples and buckeyes, although most trees have alternately arranged foliage) and deeply furrowed bark. The fall color varies but is usually impressive in gold or orange-purple. Ash has also been an excellent choice for the average landscape because it does well under a wide range of typical circumstances.

In this area, one usually finds the so-called White ash, Fraxinus americana and the Green ash, Fraxinus pennsylvanica. White ash is considered more noble but the two are not usually distinguished by lumbermen. Still, it is one of the most valuable of our native trees from a timber standpoint.

White ash is commonly 70-80 feet in height with a long and straight trunk. It thrives in almost any soil and is often planted as a street tree because of its ability to tolerate even air-polluted conditions.

In ancient times, the European ash was used to make spears and shield handles. The wood is heavy and strong. The wood of our native ashes has traditionally been used for tool handles, bats, oars, paddles, furniture and interior room trim.

Without Green ash, Lewis and Clark and the Voyage of Discovery would not have survived their first winter. It splits easily and has the ability to make a quick, hot fire with very little smoke and without being seasoned.

For more than 100 years, Louisville Slugger, the official bat of Major League Baseball, has sourced its White ash from a relatively small area of northern Pennsylvania and New York. Now, the emerald ash borer is invading the company’s harvest site.

Ash seeds provide food for many birds and small mammals, and sites for cavity nesters such as wood ducks, nuthatches, woodpeckers, owls and squirrels. The leaves provide food for 150 species of butterflies and moths. 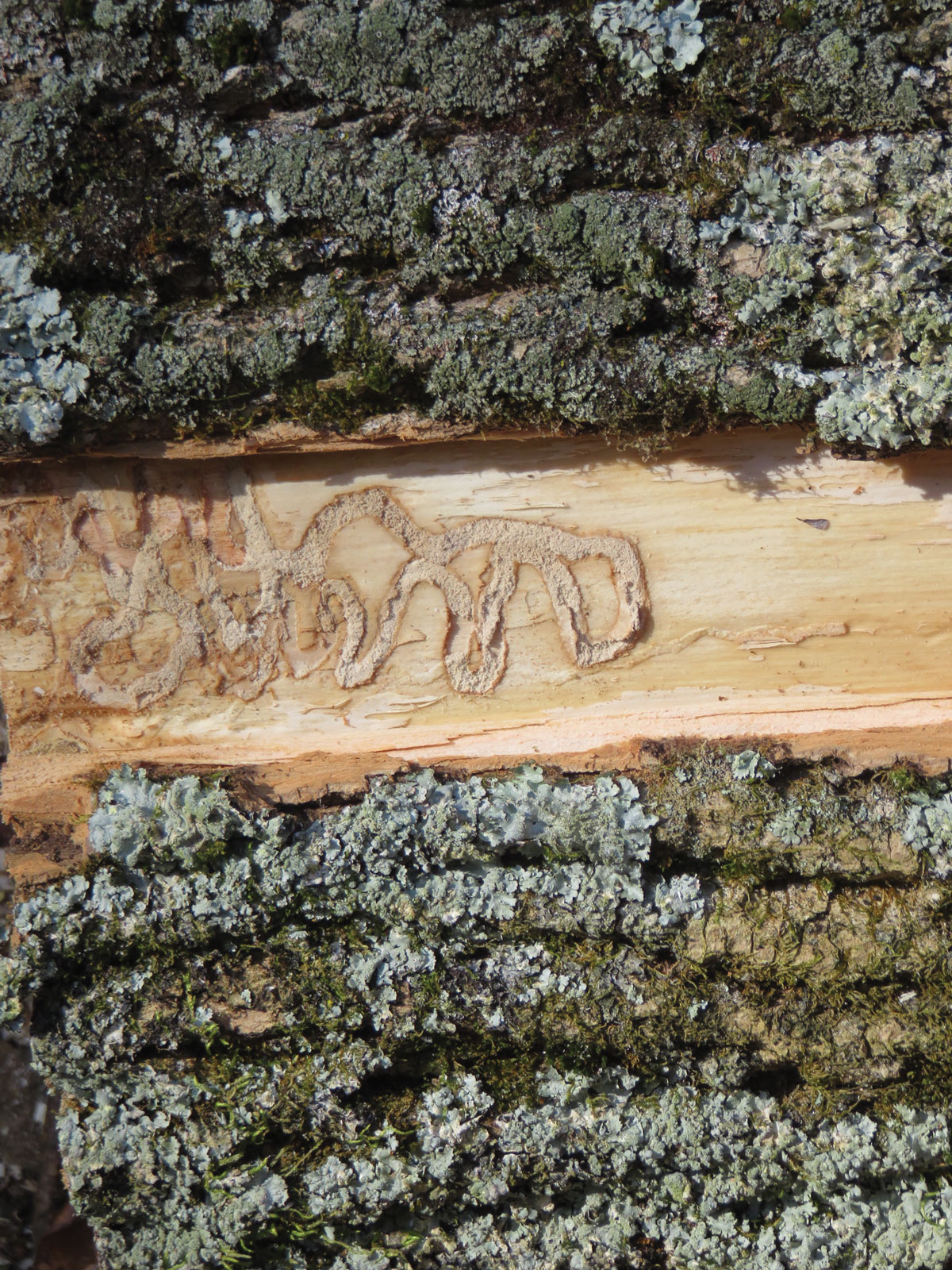 Where to learn more about the emerald ash borer

Gardeners who want to know how to identify the stages of the insect’s life cycle and figure out whether their ash tree has been attacked (it likely has) can go to Penn State Extension’s web site: https://ento.psu.edu/extension/trees-shrubs/emerald-ash-borer. Penn State has a plantation of ash trees that they have been studying  for many years for reasons unrelated to the current crisis. Unfortunately, nearly all the trees are now dead. Forestry scientists hope that the few remaining trees might have some degree of resistance and could be used in a breeding program. This will likely take years, if not decades.

There is also a risk that the borer will begin to attack other trees. Ash trees are in the Oleaceae, the olive family. Other garden trees and shrubs in this family include the Fringetree (Chionanthus), Holly-leaf Osmanthus (Osmanthus), Lilac (Syringa), and the common hedging-shrub Privet (Ligustrum).

Unfortunately, the insecticides available to combat borers are non-specific. They affect all insects including bees and other pollinators that feed on the nectar and pollen produced by ash. 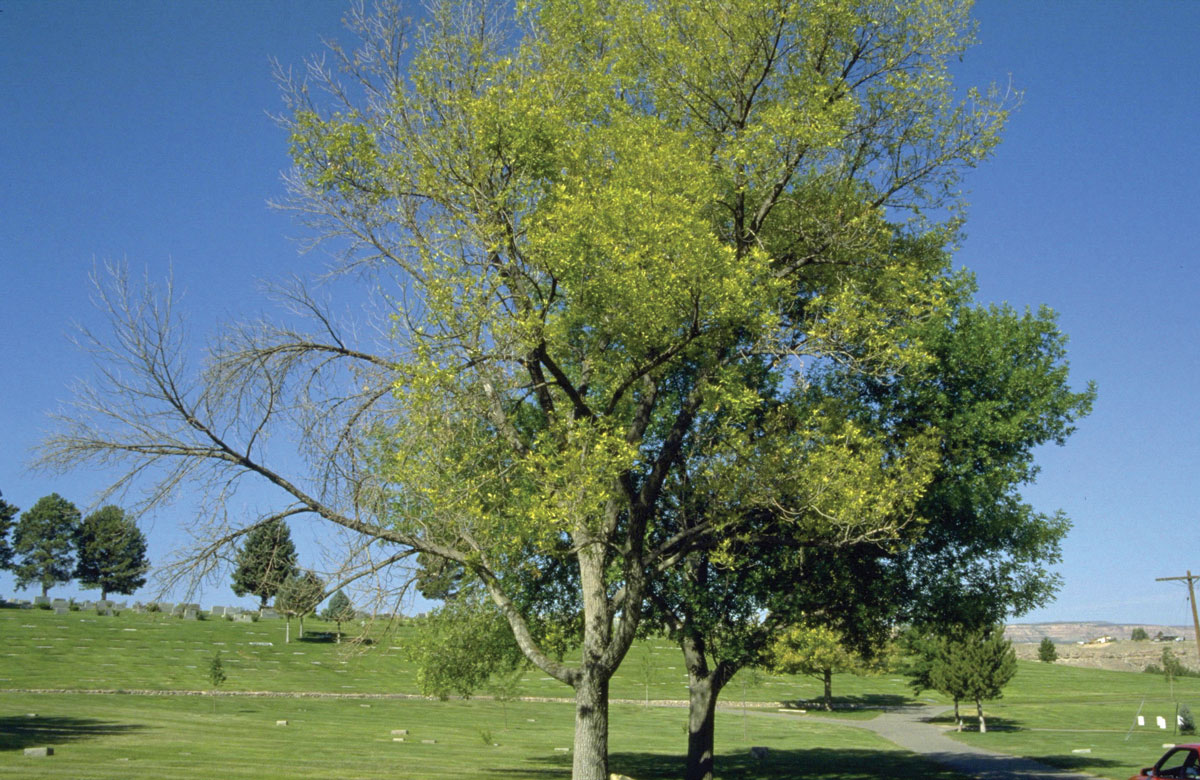 Homeowners need to prepare for the inevitable demise of their ash trees. I’d suggest that you discuss replacements with your local fine nursery. Consider another native hardwood tree that will perform similar functions: providing shade, wildlife habitat and seasonal interest.

Here are my suggestions of equally large, native deciduous trees. Unless indicated, they will tolerate a wide range of soil conditions and many are valuable to wildlife.

Perfect for a lawn specimen tree and a great choice for the widest range of growing conditions. It even tolerates wet sites. Many cultivars have been selected specifically for outstanding red fall color. This would likely be my choice if I could have only one shade tree. Not finicky, a red maple will grow!

A beautiful and iconic shade tree. However, keep in mind that it insists on rich soil with adequate moisture, which means it is not a tree for stressful situations. The outstanding fall color display ranges from yellow to orange or red. It is the primary source of sap for production of maple syrup.

Fast growing and nice as a specimen or in a grove, this cultivar has the usual bright-yellow fall color of birches. In winter, the bark is a major ornamental feature, as it sheds in papery sheets with underlying colors of pink, cinnamon brown, gray and white. However, this cultivar usually grows with multiple trunks which are subject to winter damage.

This slow grower is massive and stately in maturity. It is tolerant of moist soil from sandy to clay. Definitely a country-side selection – it is not appropriate in congested urban settings because of its sensitivity to pollution. The fall color is a golden bronze. The smooth bark is attractive but the superficial root system will not endear it to a turf fanatic. Nor will the dropping beech nuts, although they are a major source of food for many mammals and birds. Cultivars with purple or copper foliage are available. Winnie-the-Pooh lives in a beech tree!

This colossal tree is very adaptive to polluted urban areas and is among the fastest growing of landscape trees. it is tolerant of wet soils and short-term flooding. The fall color is not showy but in all seasons the bark is eye-catching, as it exfoliates in shades of brown, gray, green, white and cream.

Some would say it is overplanted but that is because it is an ideal option for lawns and streets. It is tolerant of salt, wind and summer heat. The finely textured foliage provides filtered shade and displays attractive yellow fall color. Insist on a cultivar of this variety because it is without thorns and produces few seeds.

An easily grown tree that’s tolerant of soil types and wet conditions. The fall color, at its best, is a brilliant mixture of yellows, oranges, purples and reds. However, sweetgum is not appropriate as a street tree because the gum-ball fruits are a litter problem in urban areas and a hazard to bare feet. Nevertheless, there are many cultivars of this magnificent tree including ‘Rotundiloba’ which are fruitless.

This large and stately tree, which is widespread throughout Lancaster County woodlands, is also an admirable fast-growing landscape tree. It prefers a moist, well-drained area. The showy, magnolia-like, orange-banded yellow flowers are usually hidden by the foliage. Expect dependable yellow fall color.

White oak grows over much of eastern North America’s forests – it is an important hardwood timber tree – but makes an exceptional shade tree for a large space. It has good drought tolerance. Perhaps the slow growth rate has somewhat tempered its popularity, making it hard to find in nurseries. It displays a rich-brown fall color. The acorns are very palatable to a wide variety of wildlife.

A magnificent specimen tree with a flat crown, this is one of the few trees that can grow in deep, permanent-standing water. It is tolerant of drought when established. A deciduous conifer with finely textured foliage and bronze fall color. They can live for over 2,000 years.

A handsome large shade tree. It’s easily grown, although it will not thrive in urban pollution. In late spring, it’s notable for its showy, ball-and-paddle flowers that attract honey bees. Honey made from the nectar of these flowers is a prized gourmet item. The wood is highly desired by wood carvers.

Finally, a word of warning: Do not plant silver maple Acer saccharinum or the wretched Bradford pear Pyrus calleryana.