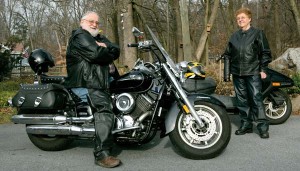 Forty-four years ago, Don and Marilyn rode bicycles together in Alaska. Today they live in Elizabethtown and have traded their bicycles for motorcycles: a Yamaha V-Star 1100 for him and a Honda Helix with automatic shift for her. The passage of time has not dulled their desire for adventure!

Don and Marilyn have always shared a love for the active life. Early in their 46-year marriage, they canoed Alaska’s major rivers and found living in Fairbanks to be exhilarating. They also took to the roads on their bicycles and skied every chance they had, hitting the slopes in such places as Alaska, Idaho, Washington and Vermont.

Don and Marilyn both hail from Indiana. Marilyn, a teacher of three years, was living in Columbus when she first met Don. She remembers he was dressed as Santa Claus and had a big sack slung over his shoulder. “It was near Christmas,” she recounts, “and he had just finished playing Santa for the bank employees’ children where he worked.”

Following their first date, Marilyn confides, “I was smitten. We discovered we both had a lot in common, and I really admired him because he had so many good qualities. He loved helping people.” When he proposed marriage, she remembers he got down on one knee. “He was very traditional,” Marilyn adds. 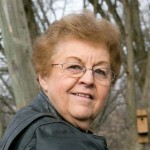 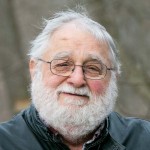 Two years after their wedding, they found themselves heading for the adventure of living in Alaska, where there was a great need for teachers, and Don saw a major opportunity for himself in the banking industry: becoming a vice president with the Northern Division of Alaska State Bank.  Now in their 70s, the two have traded their bicycles and skis for motorcycles. “My knees just could not push a bike pedal anymore,” Don explains. But they still had a desire to get the same thrill of feeling the wind rush through their hair and experience the same excitement of going fast, which skiing and bike riding provided. They figured riding a motorcycle was the answer.

So, at the age of 62, Don received his motorcycle license. “We started riding late in life,” Don says. Marilyn followed shortly after Don, receiving her license on her first try. The two heartily laugh as Don sheepishly admits to three tries before getting his license. In his defense he adds, “But I was a lot older, you know,” referring to their six-year age difference.

Marilyn says getting their licenses later in life has been a plus. “That is why we don’t have accidents. We’re old enough to ‘ride smart’ and not be daredevils.”  In fact, when they hit the road, they gear-up in their “leathers” (jackets, gloves, pants) and helmets for safety reasons.

Both remember a funny story about their 95-year-old friend, Betty, who lived in Mt. Gretna. Don and Marilyn have always loved the Mt. Gretna area and visit there frequently. On this occasion, they decided to suit up in their leathers and helmets to go see Betty. Upon hearing the revving of motorcycle engines in front of her house, she peeked out her front door, only to see two unfamiliar bikers. So, she locked her door and hid behind a closed blind, fearing she was about to be robbed or assaulted by a biker gang. Imagine her surprise when the helmets came off and she recognized her friends standing at her door! Marilyn laughs at the memory, saying, “We looked like two Star Wars stormtroopers in all our gear.”

Retirement has brought new adventures for the couple, who have two grown children, Luke and Abigail, and four grandchildren. Don is a retired professor, having taught at Elizabethtown College for 23 years. Marilyn was a teacher for 46 years, 32 of which were spent in the Manheim Central School District. Now retired, she stays busy with family, clubs and ushering at the Fulton Theatre and Mt. Gretna Playhouse.

Don has always enjoyed music. He plays various musical instruments and has been singing since the age of 5. He also possesses a talent for acting. He has appeared in musicals such as Fiddler on the Roof, The Music Man and The Pirates of Penzance. Well known for his deep bass voice, he formed a barbershop quartet in high school and sang with the Singing Hoosiers at his alma mater, Indiana University, which recently honored him with the Distinguished Alumni Award.

When they want to relax, this fun-loving couple jump on their motorcycles. They admit their favorite ride is “any trip that takes more than one day.” They agree it’s exciting to turn down a road not knowing where it will lead. 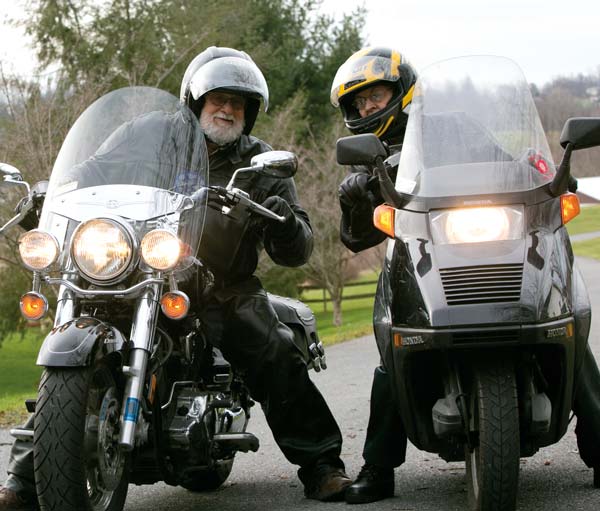