At age 3, when most children his age were still learning to talk, Randy Miller was singing in front of a church audience. That was 58 years ago; today you can still find Randy singing gospel … and loving it as much as ever.

Randy remembers his father carrying him up to the front of their family’s church in Shanksville, Pennsylvania, and saying, “Randy has a song for you.” The tot proceeded to sing I’ve Been with Jesus. Being able to sing at such a young age was remarkable in itself, but even more remarkable was the fact that Randy was a survivor of polio.

Sixty years ago, polio was one of the most communicable diseases among children in the United States. According to the Centers for Disease Control (CDC), at its height, the disease crippled 100 children a week. Adults were not immune either: Franklin D. Roosevelt contracted polio 12 years before becoming president. By 1979 – thanks to immunization – polio was eradicated in the U.S. Today, fewer than 10 countries report cases, and incidences of polio (worldwide) have fallen to fewer than 100 cases per year. Pakistan and Afghanistan remain the only nations classified by the CDC and organizations affiliated with the United Nations as “polio-endemic.”

Part of the credit for the turnaround goes to Rotary International, which adopted the eradication of polio as a project in 1985. Randy supports the organization’s work. Last year he released a Christmas CD, Sweet Christmas; 100% of the proceeds from the CD are being donated to two children’s health charities, the Rotary Foundation PolioPlus Fund and St. Jude Children’s Research Hospital.

Raised in central city, Pennsylvania, Randy is the youngest of five children. At 10 months old, he had been walking for three weeks when polio struck. Doctors told his parents that if he lived, he would likely never walk again. Because of high fevers, they were also warned he would more than likely have brain damage.

Randy went on to prove the doctors wrong on both counts. He took his first steps with crutches at around five years of age. He excelled in school, graduated from college and law school and became an attorney – a job that uses 100% of the brain!  “Through the years, I went on to do a lot of things they thought I’d never be able to do. I also proved I was able to get into the same amount of trouble as any other kid my age. Only I’d blame it on my brothers,” he laughs.

Elizabethtown College lured Randy to Lancaster County in 1972. He met his future wife, Joanne, at an intervarsity fellowship meeting. “I like to tell people at my speaking engagements, I walked up to her and said, ‘Your prayers have been answered.’ But the truth is we were friends for a long time,” he explains. Friendship turned into romance, and the two were married in 1975. Together they have three daughters, Emily, Sara and Charity. They also have four grandchildren. Joanne, who taught at the Kraybill Campus of Lancaster Mennonite School for 14 years, helps Randy at the law practice, which is located in Elizabethtown.

Randy has always had a passion for gospel music. He recorded his first album, Because He Lives, at age 16. The cover of the album pictured a teenage Randy. Today, at 61, he has released his ninth recording. Its title, Still Singing, relates to a question that’s inevitably posed by friends he hasn’t seen in a while: “Are you still singing?” He proposed the title as a way to let people know he’s still at it and is still going strong.

Many people are of the opinion that Randy sings a lot like Elvis Presley, while others say he has a style similar to that of Jim Reeves. Elvis was always a favorite of Randy’s, but he points to the famed gospel group The Couriers as his inspiration. “After I first heard them sing, I really felt their music,” he says. Randy was overjoyed when The Original Couriers graciously offered to sing background on Still Singing.
Over the years Randy has performed at churches, civic organizations, the Youngstown Fair in Ohio, outdoor concerts and many other venues across the U.S. During his performances, he often engages in dialogue with his audiences and shares stories about his life and his experience with polio. His main purpose is to “share the music,” and with it offer hope, as well as encourage and help people.
Randy maintains he’s not yet ready to retire from practicing law. But when that day does arrive, you can bet singing will be this man’s “second act.” 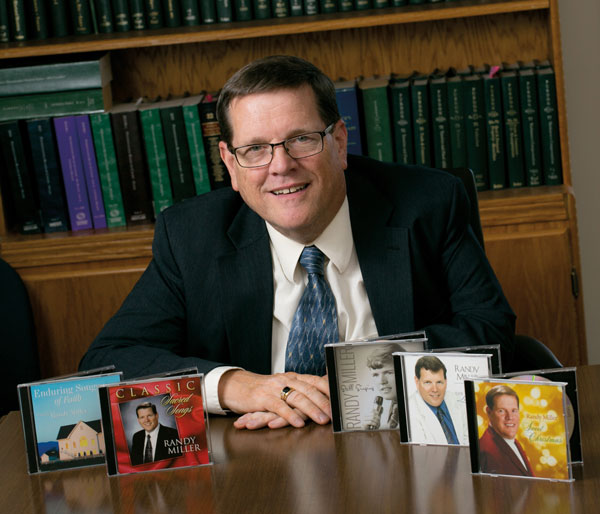 Attorney Randy Miller has been singing gospel music since the age of 3. Thus far, he has recorded nine albums/CDs.