Architect Ben Samberg can feel the pulse of an idea. A certain je ne sais quoi speaks to him through dimensions, aesthetics and history (or lack thereof) of a particular space. In his own words, architects “create in a sea of limitations where each enterprise is a new experiment.” This is why he loves what he does. 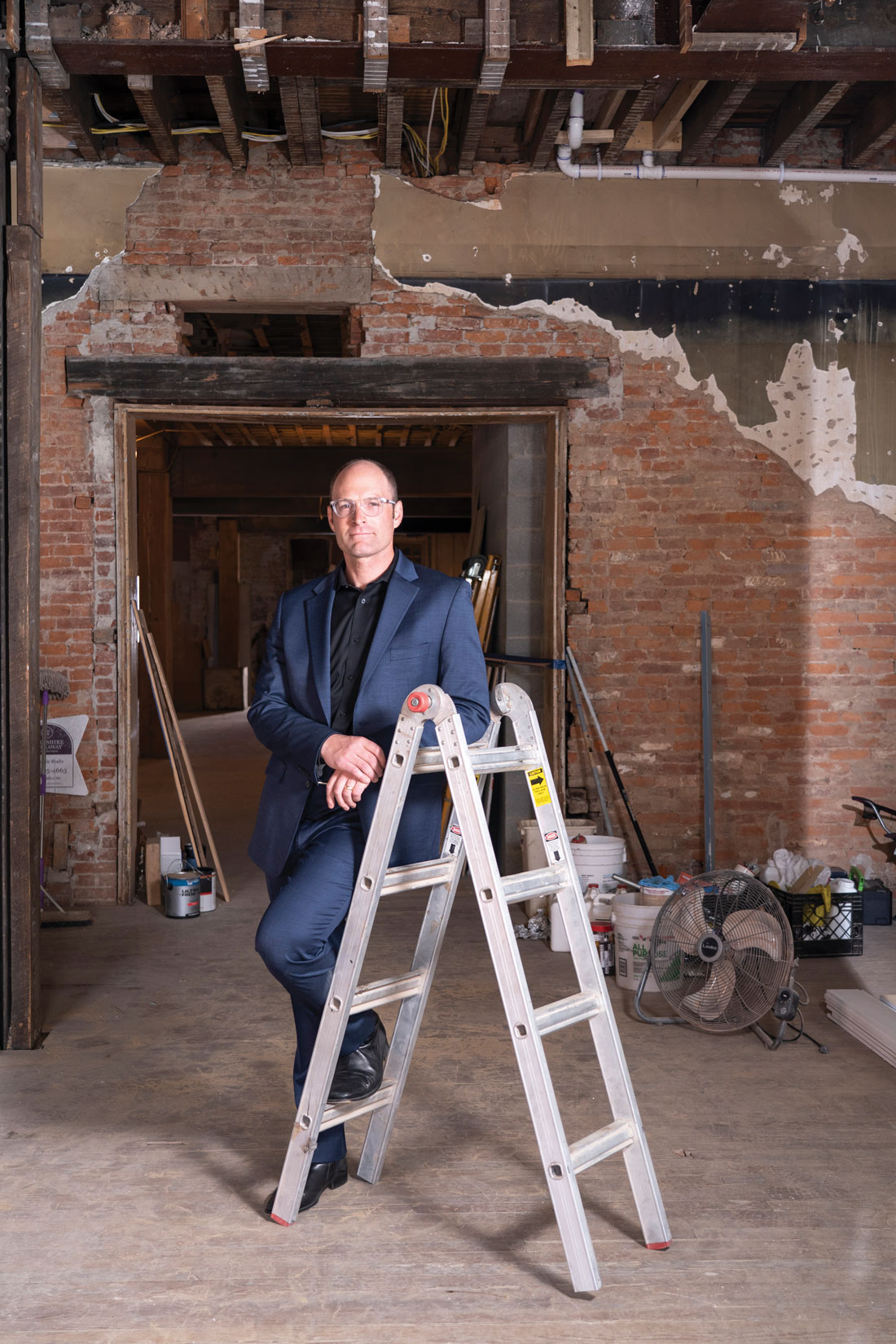 Ben Samberg in the space that was formerly home to Coe Camera on North Prince Street. Next month it will become The Double C, a restaurant being launched by Sean Cavanaugh and Michael Carson, the chefs behind John J. Jeffries.

When I sat down to talk with Ben about his latest design – a new endeavor by chefs Sean Cavanaugh and Michael Carson of John J. Jeffries – The Double C restaurant was physically far from completion despite a door-opening deadline that was only a few months away in December. Feeding off the chefs’ idea of an upscale taqueria and tequila bar – his only direction was to make the space “cool” – Ben launched into a Día de los Muertos vibe.

He also immediately homed in on the heavy timber exposed by gutting the former Coe Camera Shop on North Prince Street. As the 3,800-square-foot space opened up, Ben began to envision well-crafted finishes created by metal experts, as well as custom leather booths. Old steel beams found abandoned in the basement would become hostess stations, while tabletops created from locally sourced timber would best be described as surgical (not reclaimed). Think flesh, bone, wood and metal in a welcoming juxtaposition.

“The space is really messed up in a beautiful way. There is a lot of texture. As I started to work on the project, I began to play up on some of the moody, bordello feel that is a bit – dare I say – ‘hip’ right now, like real vespertilian kind of stuff,” says Ben in the small, book-filled office of Lancaster Architectural Works right up the street from the restaurant.

For Ben, it is best when a client “sort-of knows” what they want, and he can lend his own vision to a project. While designing Rock Lititz’s Pod 2, his drive was to create a false narrative, to turn a new, metal building into a character of its own. He started by incorporating old crane parts he found at a nearby construction site. Consider the large bench at Gravie Kitchen + Commons inside Pod 2. It is made from the continuous track of a decommissioned crane. “That thing weighed like 5,000 pounds,” says Ben.

“I’ve gone in afterwards just to see how people interact with the space. I’ve overheard people asking, ‘What did this building used to be.’ Dude, it’s a brand-new building! It didn’t used-to-be anything,” says Ben excitedly. “That to me is the false narrative I was looking for. Design, especially with restaurants, is not like the days of yore, like TGI Fridays where you throw a bunch of stuff on the wall. It has everything to do with how the space is carved. I want people to interact with the structure even if they don’t know they are doing it.”

Although Ben has spearheaded projects like Pod 2, the Dickin Memorial Animal Hospital in Endicott, New York, and multiple residences in several states, he has a deep appreciation and desire for designing restaurants.

“There’s this willing suspension of disbelief when you enter a restaurant. You can eat the same thing you buy at a restaurant in a white box, but it won’t taste the same. The restaurant is that third space between customer and food; how a conversation is generated – sparked sometimes by the surroundings – changes the taste of the food. You’ll do things in a restaurant you wouldn’t normally do because of the vibe,” says Ben.

Over the past few years, he has been working closely with Omar Alsaadi and Mouhanad Kabbani, owners of Pita Chip, which Ben affectionately and with all respect calls the “Chipotle of shawarma” with food he describes as “out of control” good. The handheld, Middle Eastern to-go food from the small and growing chain based in Philadelphia sounds amazing as he describes it.

“It has everything to do with how the space is carved. I want people to interact with the structure even if they don’t know they are doing it.”

For their endeavor, Alsaadi and Kabbani wanted the feel of being out on the street brought inside a restaurant. “So, I literally pushed the boundaries of the space,” says Ben. Literally. He bought a shipping container, disassembled it, and reconstructed and retrofitted the massive metal structure inside the Pita Chip on the campus of Drexel University; he added 200-year old chestnut and a 15-foot city streetscape mural to complete the design. “I love putting a lot of heavy steel in restaurants and then softening it with wood. That’s kinda’ my thing. It feels right – crispy-and-chill in a relationship with soft, inanimate warmth. Then, if the food is really good, it just marries perfectly.”

Ben is married to English teacher Desiree Samberg, and the couple lives just outside of Lancaster City with their two boys, Sam and Remy. He’s a Lancaster native. After graduating from Lancaster Country Day School, Ben accepted a full scholarship to Temple University to study architecture, a time dotted with spats of self-exploration. He lived and studied briefly in Japan where he gained much of his “material culture” through wabi-sabi, which is Anglicized to mean the art of imperfection combined with acceptance and understanding of aesthetic sensibility. “It’s an earthen-borne architectural language where the material itself, even though it is inanimate, still has a spirit. Depending on how you put two materials together can change that spirit,” Ben explains.

At one point he dropped out of Temple to become a photographer and was accepted at the Corcoran School of the Arts & Design in Washington D.C. But, architecture called him back. He graduated with honors, moved to Chicago to study furniture making, and eventually came back to Lancaster County. He knew he needed to gain hands-on knowledge about the business of architecture and went to work for several local firms.

“I could see the Lancaster art scene was starting to get hot. This was around ’06-07. All of a sudden, I’m helping build the convention center,” he recalls. “And, I knew I wanted to have my own practice.”

After a brief stint building and designing for Tait Towers, Ben started Lancaster Architectural Works. Soon he was running his own firm and a construction company. His first restaurant – Gran Sabor Latino – is located at 120 N. Franklin Street in Lancaster.

He’s scaled back to a one-man show, but as we talk, his phone is ringing nonstop. He’s in demand. While most of his work takes him to Philly and New York, Lancastrians will get a better glimpse of Ben’s style when The Double C opens in December.

Ben Samberg in the space that was formerly home to Coe Camera on North Prince Street. Next month it will become The Double C, a restaurant being launched by Sean Cavanaugh and Michael Carson, the chefs behind John J. Jeffries.