The newly restored Star Barn looks amazing! If you have yet to see the results, December offers a number of opportunities to do so during the holiday-themed events being held at Ironstone Ranch in Elizabethtown.

The Star Barn is a well-known landmark in Central Pennsylvania. Built by Colonel John Motter in 1877, its unique Gothic Revival styling was beyond that of the typical Pennsylvania bank barn. In the 1970s, when PA 283 opened just 50 feet from the barn, it started drawing onlookers from all over the world due to its unique design. 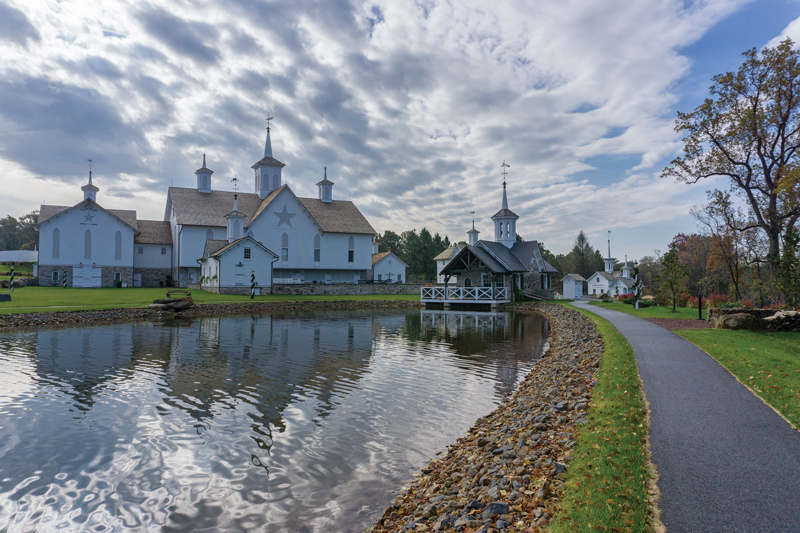 Unfortunately, the passage of time and a lack of proper maintenance caused the farm buildings to fall into a state of disrepair. Dairy operations had ceased at the farm in 1986, and in 1994, the property was reduced from 164 acres to just under four. Many organizations and community-based groups attempted to save The Star Barn, but without the means to generate income, it became extraordinarily difficult to return the barn to its former glory.

In the Summer of 2014, David and Tierney Abel began making inquiries about purchasing The Star Barn. The Abels’ attention to detail for preservation and historical accuracy was already evident – the couple had restored the 1860s-era Barn and Farmhouse at Ironstone Ranch. In 2015, they were given approval to relocate The Star Barn to Elizabethtown, where, despite the move, it would retain its place on the National Register of Historic Places. The move began in 2016. A year later, a barn-raising was held. In July of this year, the complex was officially unveiled.

This year’s holiday festivities begin with The Star Barn Village Christmas Drive-Through Light Show, which will be open to the public every Friday and Saturday from November 23 through December 29, 5-8 p.m. The 2-mile drive through the property will enable visitors to enjoy the beautiful scenery and take in a plethora of twinkling LED Christmas lights – the projected number is 400,000! Tickets are priced at $20 per car/$30 for oversized vehicles/$200 for buses.

Other events will include:

Saturday, December 1, 8 a.m.-1 p.m. Christmas at The Star Barn Village. Bring the kids out for hot cocoa, a holiday hayride, photos with Santa and much more as you get to enjoy an up-close look at the beautifully decorated Star Barn.

Friday, December 7, 5-10 p.m. (and an encore on January 11). Dinner & A Movie will feature a four-course meal, a premiere viewing of The Star Barn Movie – Moving of an Icon, a Window into Our Past, and the light show tour.

December 21 and 22, 4-6 p.m. Christmas Dinner in The Star Barn will include a family-style dinner and much more.

Looking ahead, on January 4-5, a Holiday Celebration will look to the future – the Belmont Barn will be rebuilt to house the contents of The National Christmas Center.

As with all events at the property, the net profits will be donated to Brittany’s Hope, a nonprofit organization dedicated to placing abandoned and special-needs children from around the world with adoptive families.