Stepping inside the front door of The Sutter is like taking a step back in time. Antiques and Victorian-style settees are the focal point of the entry area, delivering the feel of a well-cared-for treasure. Alternately, a visit to the dining room and cocktail lounge transports you to modern day. 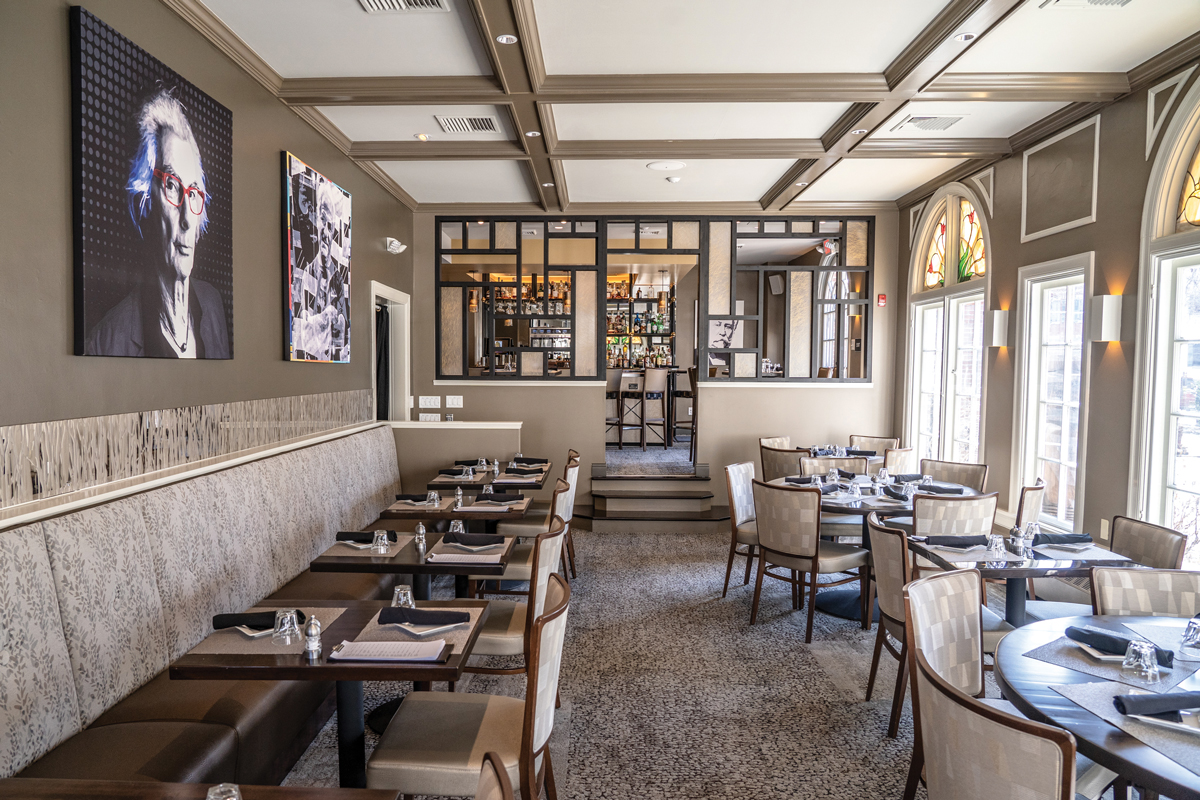 The Sutter has been a part of the Lititz landscape since 1764, when an inn was built from logs on the site. Originally known as the Zum Anker (the Sign of the Anchor), it was later renamed Lititz Springs Hotel. The inn was renovated in 1803 and again in 1848 to finally become the three-story brick building it is today.

Another name change occurred in 1930, when the property became known as The General Sutter Inn. The name honored John Augustus Sutter, the founder of the city of Sacramento and a California Gold Rush pioneer, who lived the last seven years of his life in Lititz and is buried in the Moravian Cemetery. 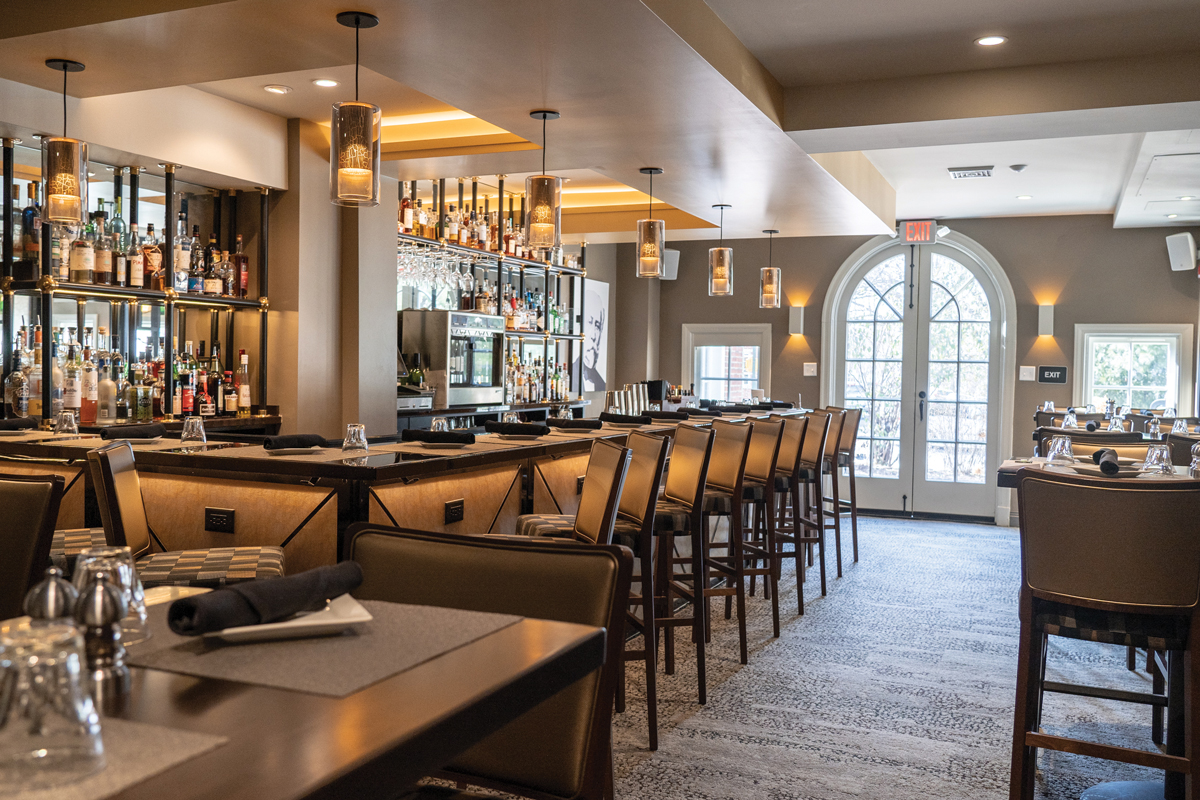 Two years ago, David and Susan Stoudt assumed ownership of the property. Today, it’s collectively known as The Sutter and is home to several dining venues, banquet and meeting facilities, as well as 17 lodging rooms and suites.

The Bulls Head Public House is one such venue. Modeled after a traditional British pub, the Bulls Head is known for its selection of craft beers and traditional pub-style fare. Beer lovers can select from 14 rotating beers on tap, two cask-conditioned ales and 80 bottled choices. As for food, dishes such as fish & chips, shepherd’s pie, pork pie, and Scotch egg pay homage to British pub fare. A Full English Breakfast is served at the Bulls Head on Saturdays. 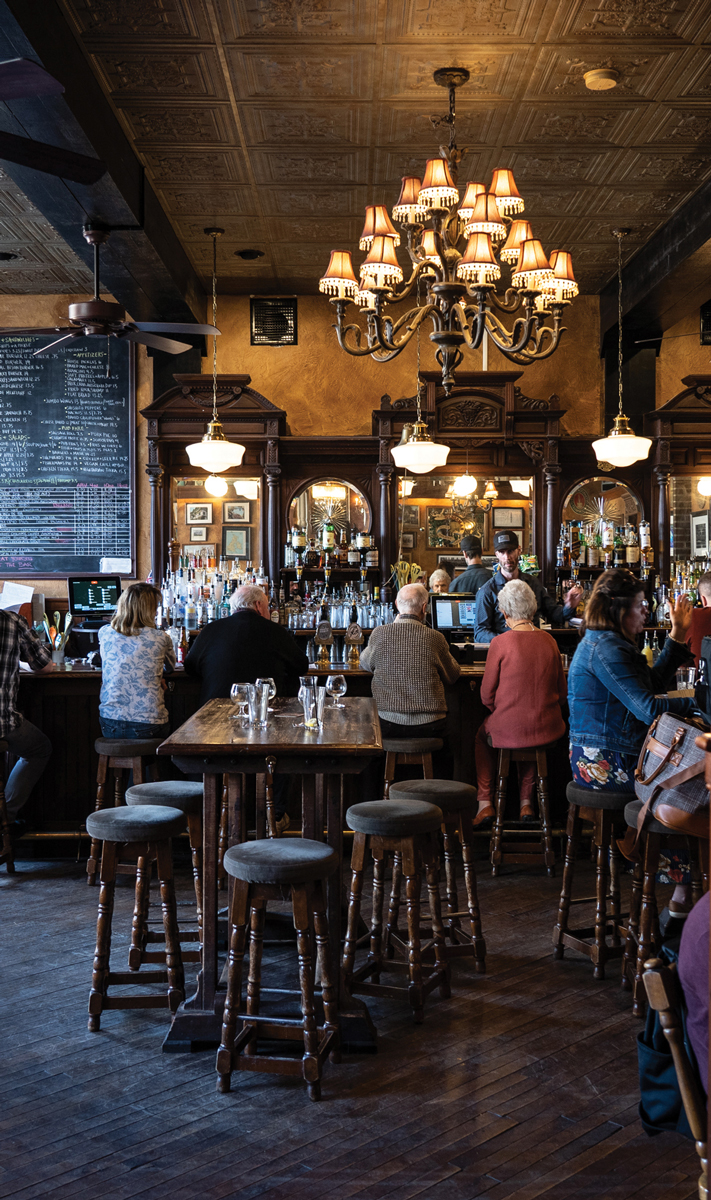 While the Bulls Head offers a traditional pub experience, The Sutter’s dining room and cocktail lounge provide a more contemporary atmosphere thanks to recently completed renovations that include updating the furnishings, fixtures and art. A Clair Bros. audio system was also installed. The new color scheme complements the iconic stained-glass that tops the oversized windows. Seating includes a banquette that lines one wall, while individual tables are placed along the windows. “The banquette seating was a deliberate way to incorporate elements of the pub; it can promote conversation between guests,” David Stoudt explains.

The 45-seat dining area now opens to the cocktail lounge. “We wanted to create a synergy between the two areas,” David explains. The redesigned spaces also reflect an element of family – the dining area honors David’s grandmother, Ann Elizabeth Mann, while the new cocktail lounge is dedicated to his grandfather, Walter Mann. 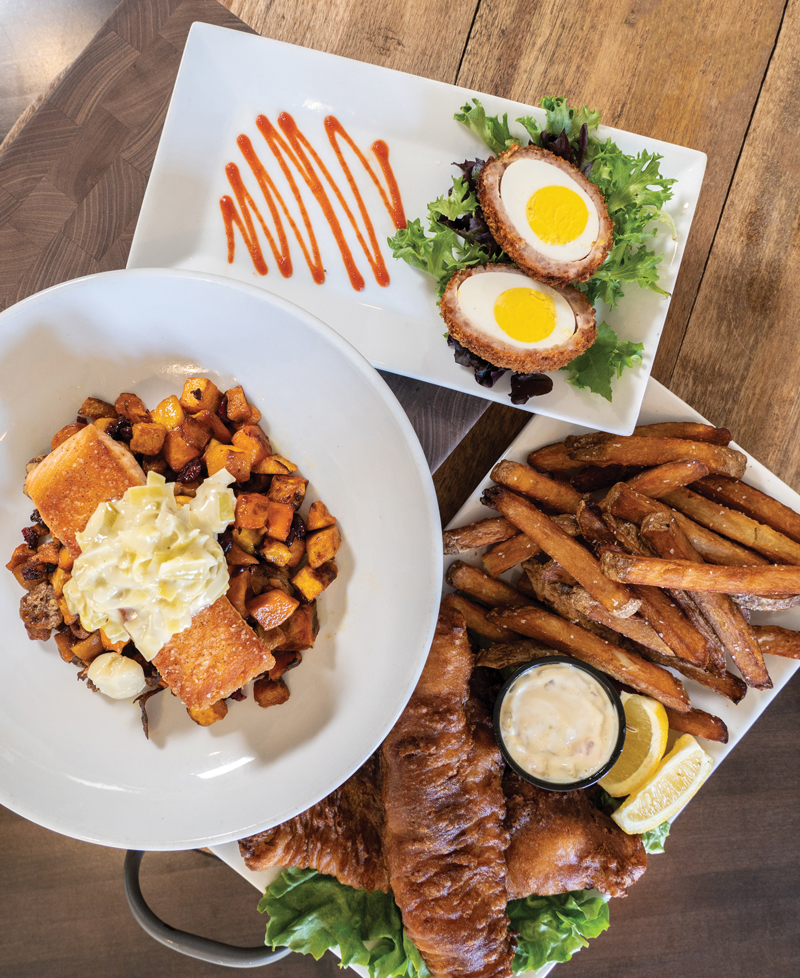 The cocktail lounge is an inviting space that features a long bar, high-top tables and a community table. A lithograph of General Sutter hangs over the bar. A wine cruvinet not only allows the restaurant to offer more wines by the glass, but it also has the flexibility to provide sampler-size pours. Additionally, the tap system has been reconfigured, enabling the Bulls Head and the cocktail lounge to share beer selections. The lounge’s mixologist has crafted 15 specialty cocktails. A service window has been installed to improve bar service on the patio. 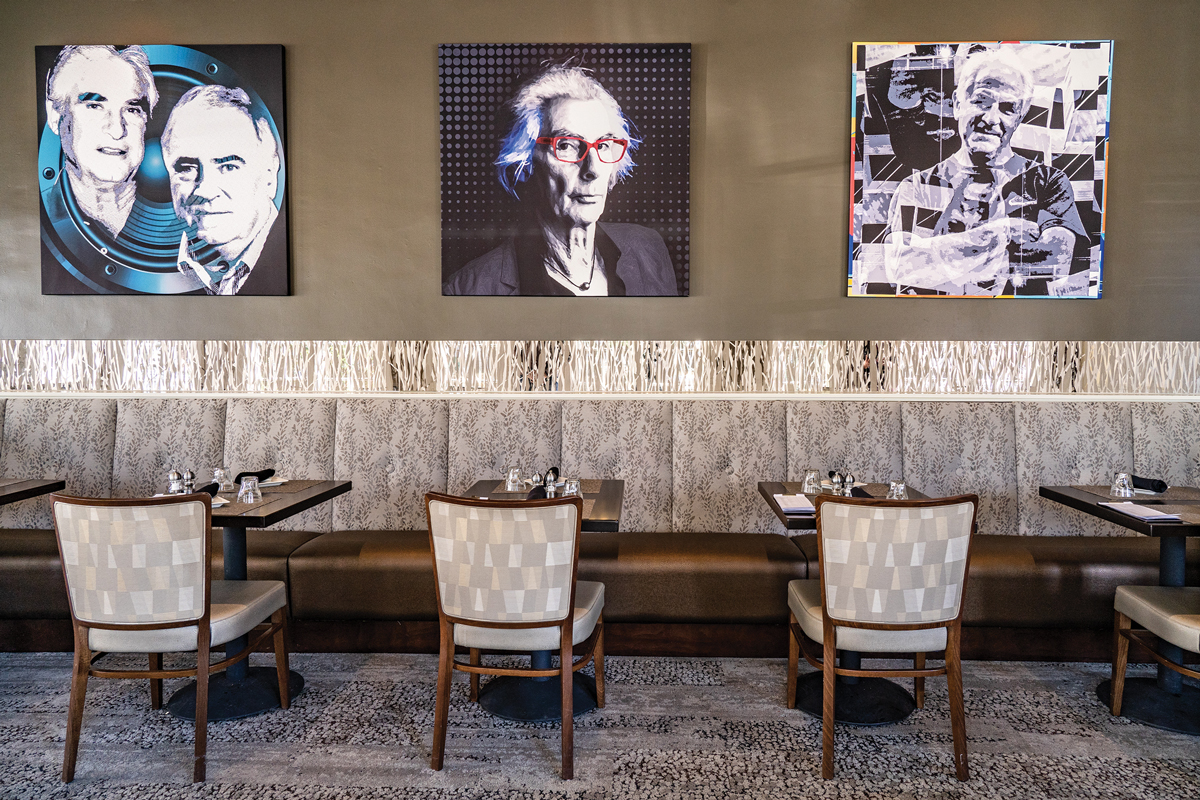 The Sutter’s patio is a favorite with both locals and guests during the warm-weather months. “Our architect, Beers-Hoffman, also created plans to renovate the patio with its historic fountain,” David notes. “But, we’re holding off on that for the moment. We’re the only restaurant in Lititz with a patio. It will be open this year – we want to be sure that what we do complements some of the major projects that are going on in Lititz right now.”

As part of the recent renovation, two guest rooms on the second floor were refurbished. The third floor features the RockBlock penthouse suites, each of which has a rock ’n’ roll theme. 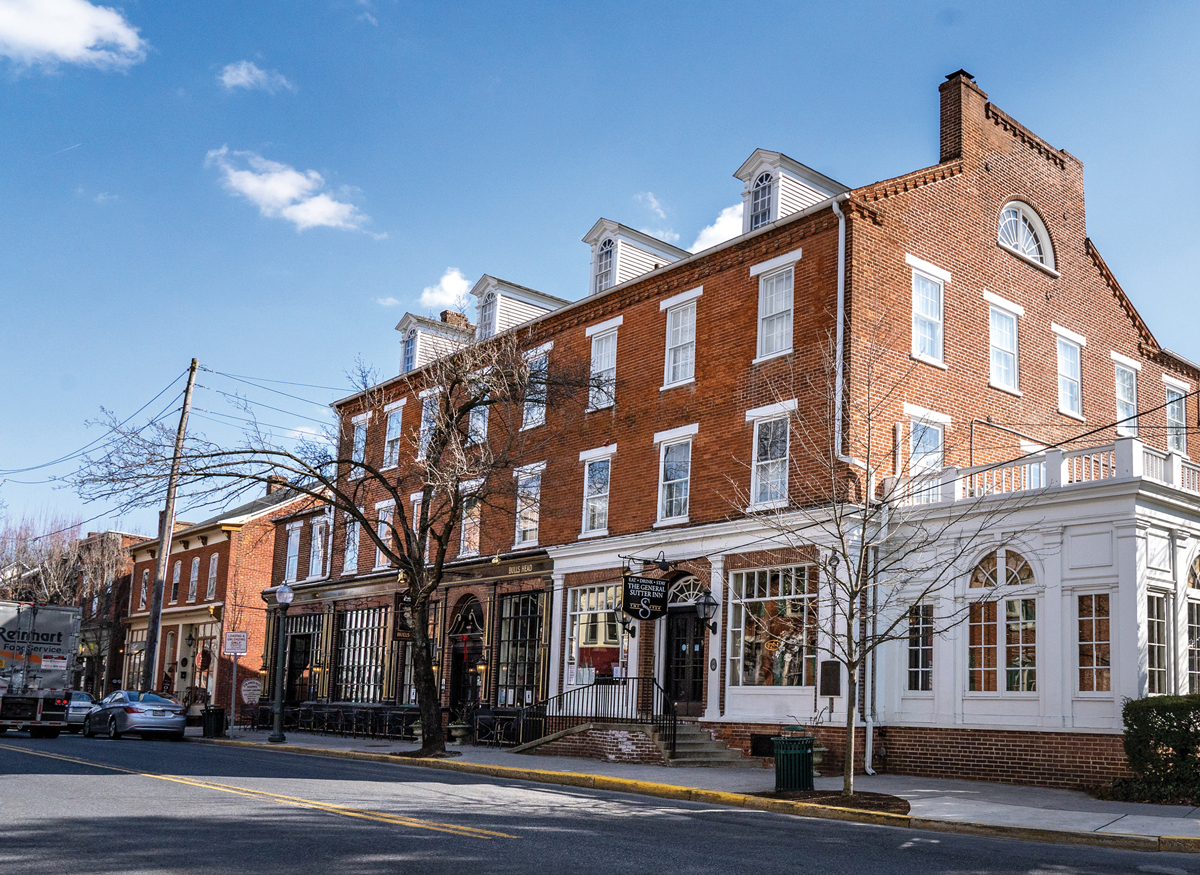 The Sutter’s menu is extensive, and in addition to the traditional pub fare, it offers soup, salads, appetizers, burgers, sandwiches, entrées and dessert. A children’s menu is also available. Entrées include such classics as crab cakes, salmon and filet, as well as roasted chicken (with a honey-garlic glaze), and short ribs & shrimp. The menu changes seasonally in order to utilize and showcase as many locally sourced items as possible. The restaurant also hosts special events such as beer, wine and cigar dinners, murder mysteries and trivia nights.