For tomato connoisseurs, this Washington Boro landmark represents the quintessential taste of summer.

In the 1930s, Washington Boro was tomato central. This little slice of Lancaster County was privy to a secret: incredible soil coupled with warm night air (courtesy of the Susquehanna River) created a greenhouse effect (of the good variety) that was conducive to raising tomatoes. At one time, more than 200,000 plants grew along the river’s edge, with the Jet Star variety being the prized crop. Optimal conditions allowed the growers to get a jump start on the season and have tomatoes in consumers’ hands by early June. Washington Boro became a force to be reckoned with in the tomato world, and a co-op was formed among the growers.

There was one drawback: growing tomatoes proved to be labor-intensive. And, once the country recovered from the Depression, the growers’ employees struck out in other directions. Production took a hit until only a handful of growers were left. The Funk family was one of them. Their survival eventually hinged on a grocery chain they began dealing with in the mid-60s. Then, one day in the late 80s, patriarch Steve Funk received a call from the chain’s management, who said Funk’s tomatoes would no longer be needed. The old-fashioned Jet Star had lost its allure due to the fact that hybrid varieties shipped better and had longer shelf lives. Taste was a non-issue.

Things went from bad to worse (Funk’s tomatoes sold for next to nothing at local produce auctions), so Steve prayed for guidance from above. Word came down that he should set up a roadside stand. He did so and took in $50 on an average day, which didn’t exactly pay the bills.

Divine help then arrived in the form of WGAL Meteorologist Joe Calhoun, who was slated to do a noon report from the Boro’s park, which is the site of the now-famed Tomato Festival. Instead, the WGAL news crew mistakenly set up their equipment at Steve’s roadside stand. Word eventually arrived that the festival’s spokespersons were waiting for Joe in the park. It was too late to relocate.

The show had to go on, and so the spokespersons traveled to the roadside stand for the interview. The camera then cut to Steve for his 15 minutes (actually 20 seconds) of fame. In that sound bite, Steve was able to put out the word that he grew the best-tasting tomatoes around.

The next day, Steve took in $800. Word spread and Washington Boro tomatoes were back on the map. According to the taste buds of Lancaster Countians, the Jet Star is the crème de la crème of the tomato world. And, yes, a new grocery chain – Giant – not to mention various farm markets, restaurants and retirement communities, receive deliveries from The Tomato Barn, which is under the direction of a new generation of growers, Steve’s daughter Jen and her husband Tyler Rohrer, who tend to the 12,000 tomato plants that grow on two family-owned farms.

Granted, heirlooms have been all the rage of late, but the good old Jet Star continues to hold its own against the competition. The secret to its long-lasting success is taste (sweet with very little acidity) and composition (tender but meaty). Pair it with bacon, a lovely variety of lettuce, artisan bread and a schmear of mayo, and you have the makings for an incredible BLT. And, you haven’t lived until you’ve tasted The Tomato Barn’s version of salsa.

Tyler notes that this season got off to a slow start due to the cool and wet weather of April and May. Jet Stars don’t like wetness. But, as luck would have it, the crop came into its own just in time for the Tomato Festival in mid-July. If the weather holds, Jet Stars will be available until mid-November.

Since taking over from Steve in 2013, Tyler and Jen have made a few changes. They’ve launched a CSA (their version allows for shareholders to choose what they want) and are experimenting with heirloom tomatoes and a few hybrids. “The taste has certainly gotten better,” Tyler says of hybrids. The tomatoes also provide the makings for The Tomato Barn’s tomato juice, spaghetti sauce and salsa. You’ll also find sweet corn (homegrown and GMO-free), peppers, cucumbers, zucchini, squash, beans, cabbage, melons, berries, peaches and other summertime favorites. “My cousins raise our melons and cantaloupes,” Tyler reports. With fall on our doorstep, apples, cabbage and pumpkins will join the lineup.

Tyler is amazed by the license plates he sees in the parking lot. On any given summer day, tomato lovers arrive from Maryland, New Jersey, Delaware, New York, Virginia and even North Carolina. “We’re kind of off the beaten path, so we’re flattered they seek us out,” he says. The Rohrers also appreciate their local customers. “We have people who come from Mount Joy and Ephrata,” he remarks. “They pass a lot of farm stands along the way, so we appreciate the fact that they come here.”

The property is also home to The Goody Barn, which sells ice cream, baked goods, whoopie pies, drinks and handmade soft pretzels. A petting zoo is also on the premises. 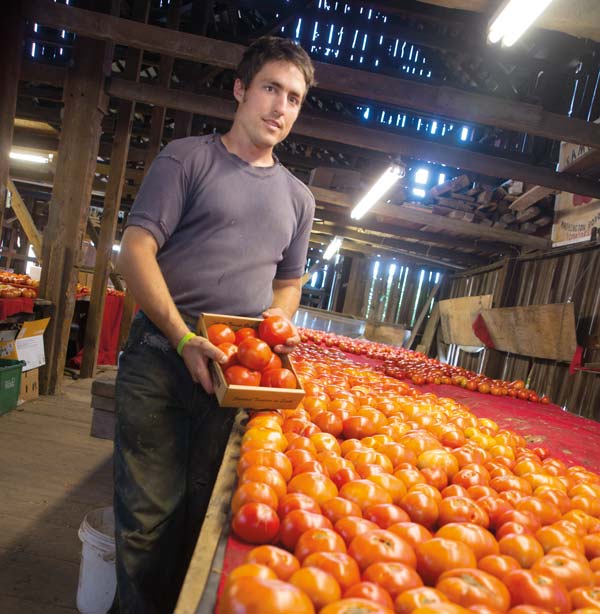 Tyler Rohrer, who grew up on a dairy farm, now oversees operations at The Tomato Barn, along with his wife Jen, who is the daughter of founder Steve Funk.