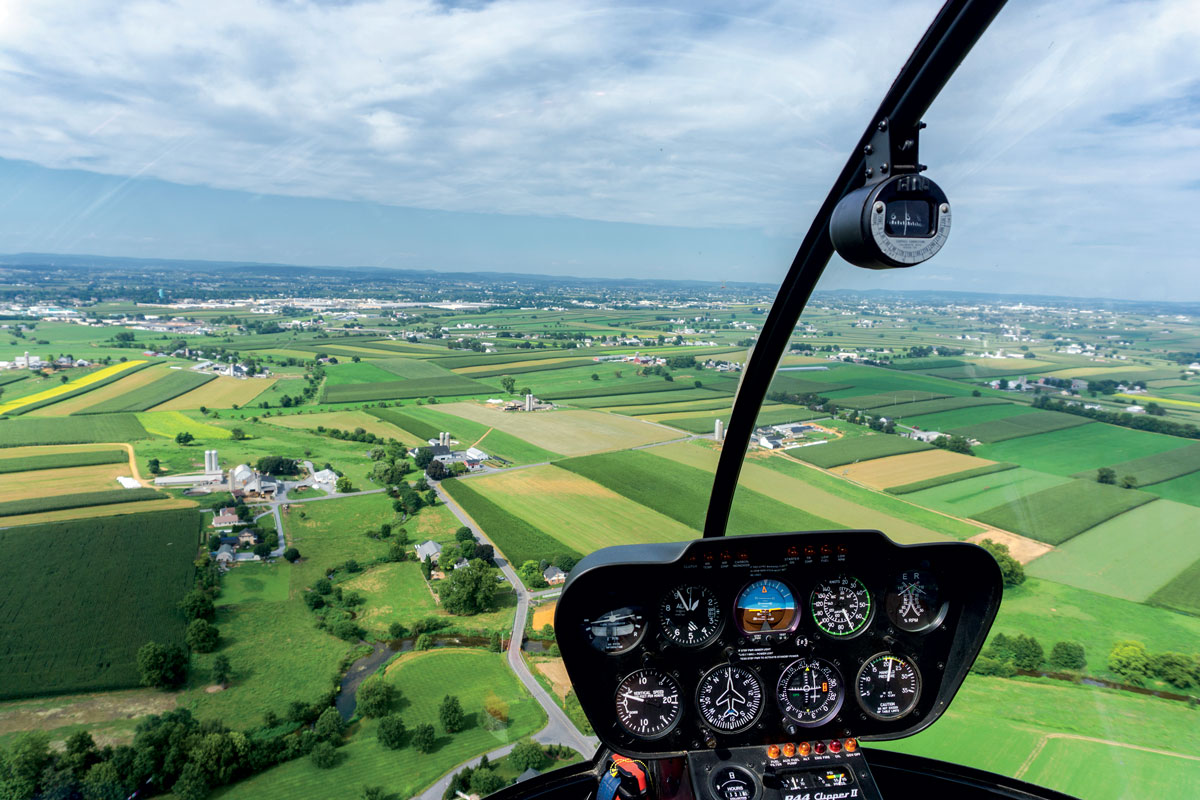 Crackle, Crackle … “If you look up ahead, that’s Leola. Over in that direction is New Holland, and off in the distance is Ephrata.” The voice of Pilot Garrett Snyder came over the headphones periodically as we made our way over the iconic farmland of eastern Lancaster County.

A few days earlier, I had noticed a small sign along Rt. 340 in Smoketown advertising helicopter rides and decided to check it out. I had never experienced Lancaster quite like this – I was  quickly on my way to literally sharing my backyard with you.

Garrett and his wife Jennifer opened Smoketown Helicopters in 2014, intent on sharing their passion for aviation. Their offices and hanger are located right next to the runway of the Smoketown Airport (S37) at 311 Airport Road in Smoketown. They offer a variety of affordable tours across the entire county. Garrett also uses his extensive knowledge and experience to train future pilots and help them earn their certifications.

After graduating from Lampeter-Strasburg, Garrett enlisted in the United States Air Force as a jet engine troop. He completed his active-duty enlistment and went on to serve in the United States Air Force Reserve, where he began flight training and was offered the opportunity to become a Certified Flight Instructor. Fortunately for us, his love of the area brought him back to PA. Now, Garrett is living his dream of owning his own flight school and tour business in Lancaster County with Jennifer and their son Landon.

Jennifer grew up in Naples, Florida, where her grandfather and uncle were pilots. She, too, developed a love of aviation at an early age. In 2008 she joined the United States Air Force, which is how she met Garrett – both were stationed in California.

Jennifer, who is still an active member of the United States Air Force Reserve, also graduated from the American Military University with a Bachelor’s Degree in Business Administration. As the director of operations at Smoketown Helicopters, she manages the day-to-day operations of the business. The couple, along with their son, make a perfect team. Their passion, knowledge and personal touch make an impression on your experience from beginning to end.

When I began brainstorming for this month’s column (in the heat of the summer), my goal was to discover a novel way to enjoy the fall foliage. I had an absolutely wonderful experience with the Snyders and could only imagine what fall looks like from up above the trees. I look forward to booking my fall flight. The feeling of flying in the helicopter was very different than other forms of flight. Traveling right around 1,000 feet gives you a truly breathtaking view of the area. With Smoketown Helicopters flying year-round, I just might have to book a few flights this year to get the full experience.