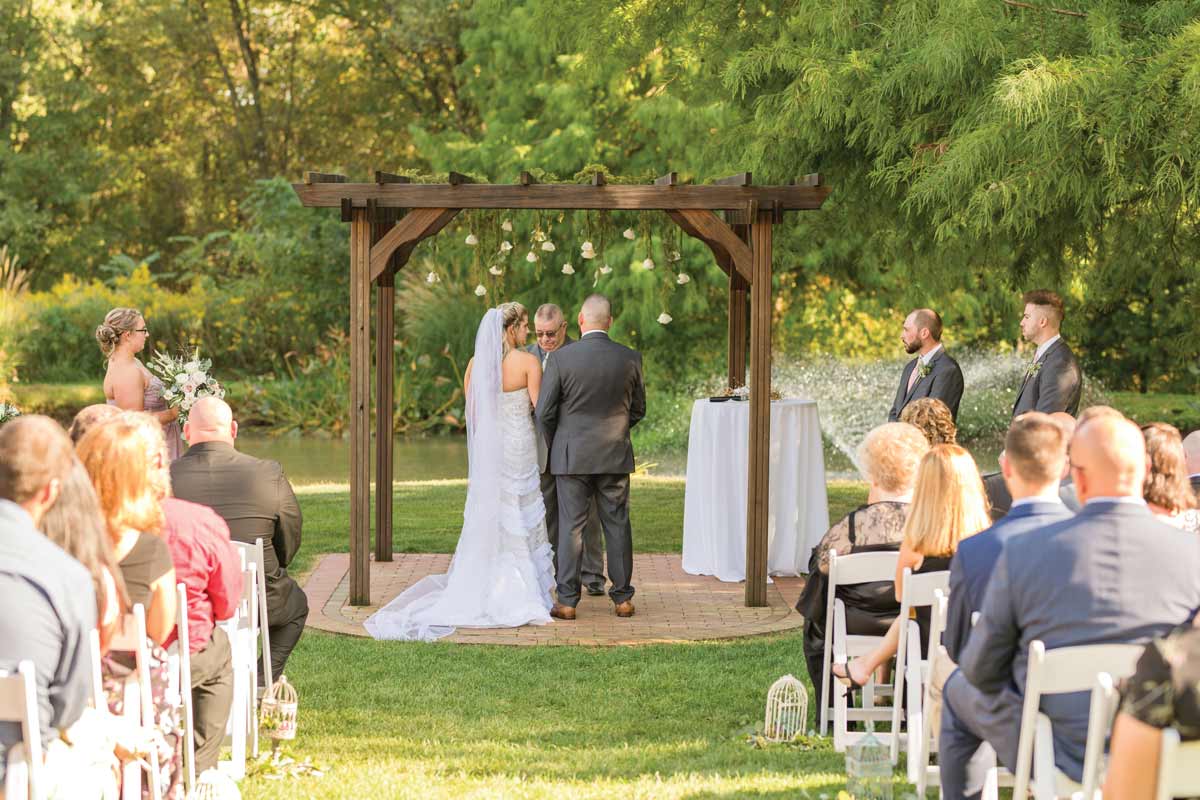 Nicole and Doug were among the fortunate couples who were able to hold the weddings of their dreams during the fall and winter of 2019. Weddings such as the Bernardinis’ provide hope that life as we knew it will return to normalcy in the very near future and we will again be able to celebrate life’s special moments with family and friends. As they celebrated their first year of marriage with dinner at Fogo de Chão and ate a piece of their wedding cake, Nicole and Doug couldn’t help but think of their friends who have had to re-think their weddings. “I don’t know what I would have done,” she says.

Nicole, who is the daughter of Bobbi and Cain Austin, is an auto mechanic at M&R Auto Center in Lancaster. Doug, who is the son of Nancy and Doug Bernardini, is a service plumber with Cocalico Plumbing & Heating in Denver. 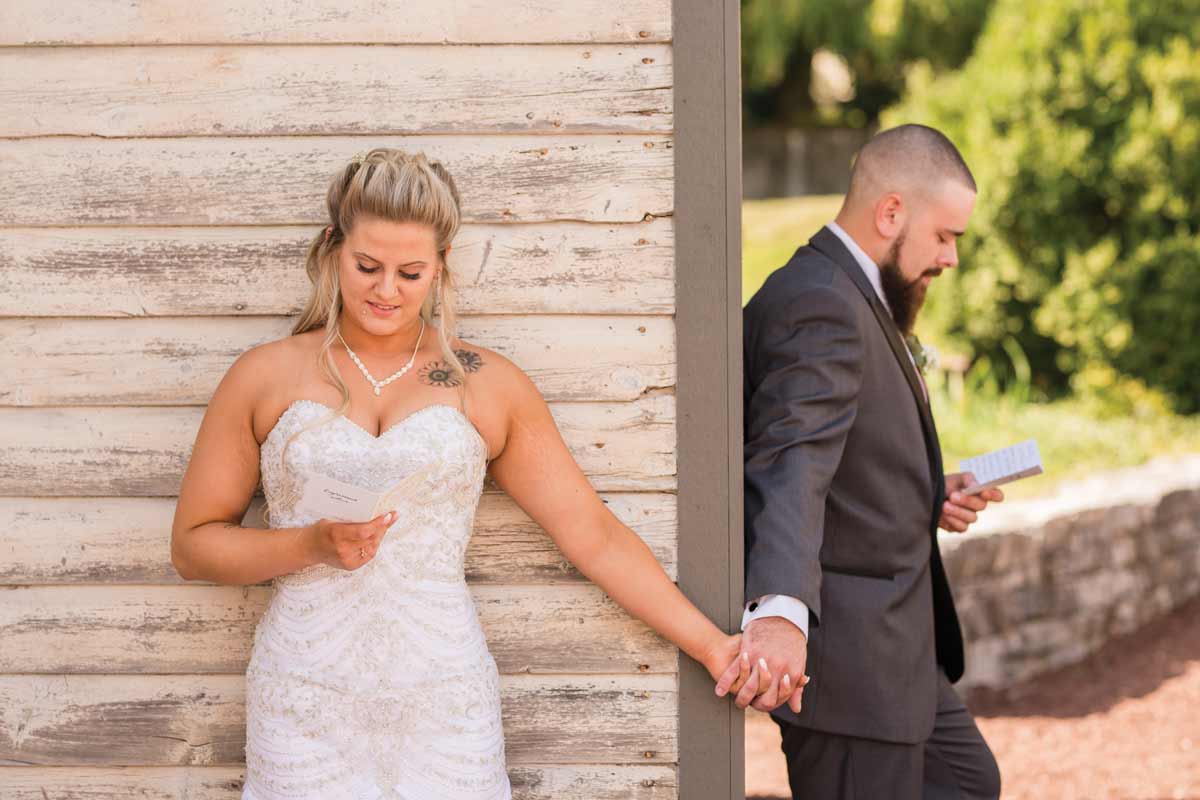 Instead of a first look, Nicole and Doug met – without looking at each other – at the corner of a building and read the personal notes they had written to each other.

Having graduated a few years apart from Warwick High School, the two were not acquainted. Years later, the closest they came to being “friends” was through mutual friends’ Facebook pages. “We still didn’t know each other and had never met,” says Nicole of their social media connection. One day, the two happened to be at the High Car Wash on Route 501 in Lititz and recognized each other from their Facebook pictures. They exchanged pleasantries and began texting each other. Two weeks later, they were officially “hanging out.” 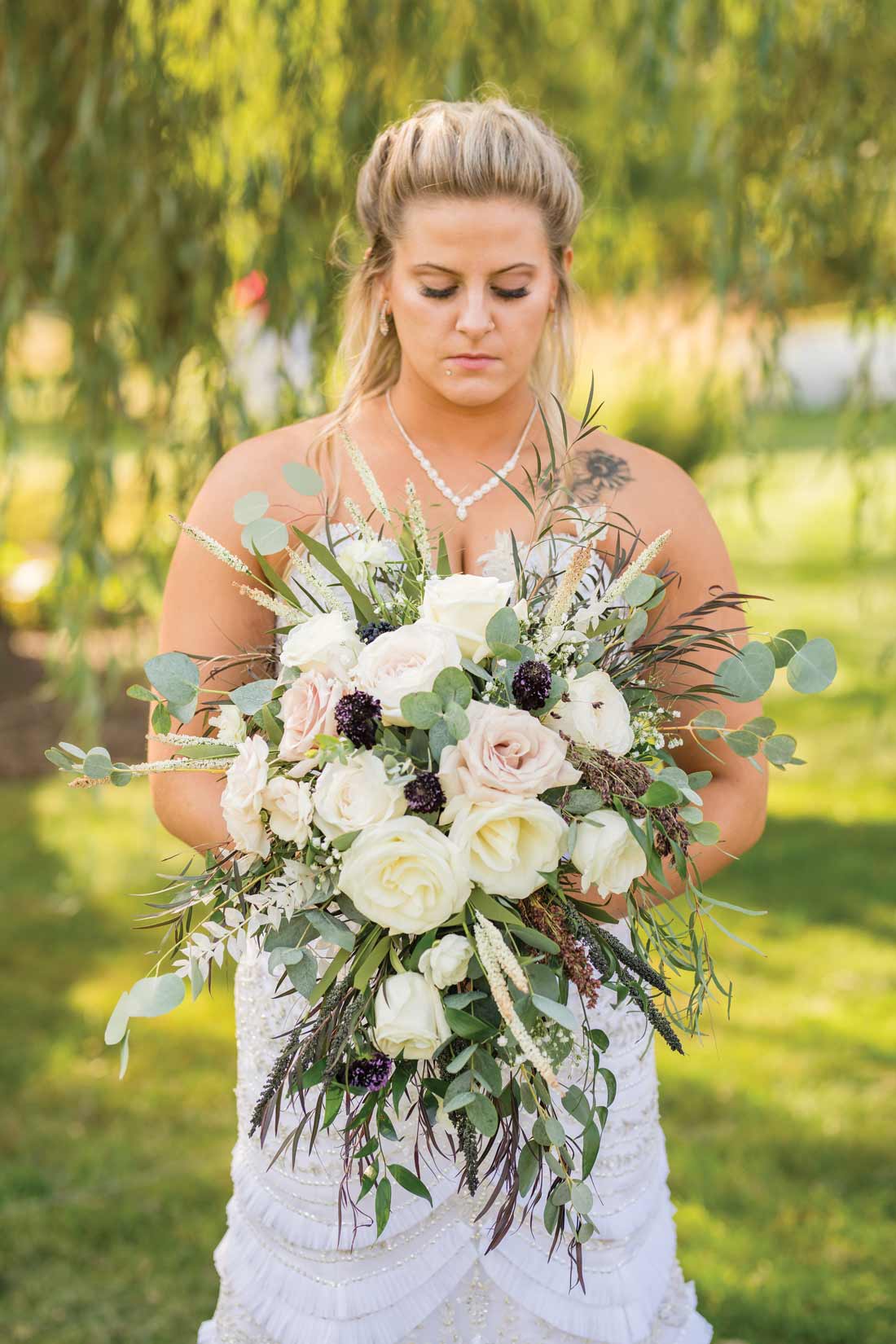 The Nightmare Before Christmas Proposal

Fast forward about a year. Agreeing that marriage was definitely in their future, the two began window shopping for an engagement ring. “I knew a proposal was coming but I didn’t know when,” Nicole explains. Doug seized the opportunity when Nicole expressed a desire to visit Koziar’s Christmas Village in Berks County. They set off on the evening of December 9, 2017, and along the way, Doug ran over a black cat. “I’m driving along and I’m a nervous wreck and I had to run over a black cat – not a rabbit or a raccoon, but a black cat!” he laments.

Now, anyone who has ever visited Koziar’s knows that it’s bedlam on pre-Christmas weekends (think of it as Berks County’s version of Times Square at holiday time). Doug managed to find a somewhat quiet and secluded spot, asked a random woman to shoot a video of the proposal and dropped to his knee to ask the clueless Nicole to marry him. “I wondered why people were applauding,” Nicole recalls. 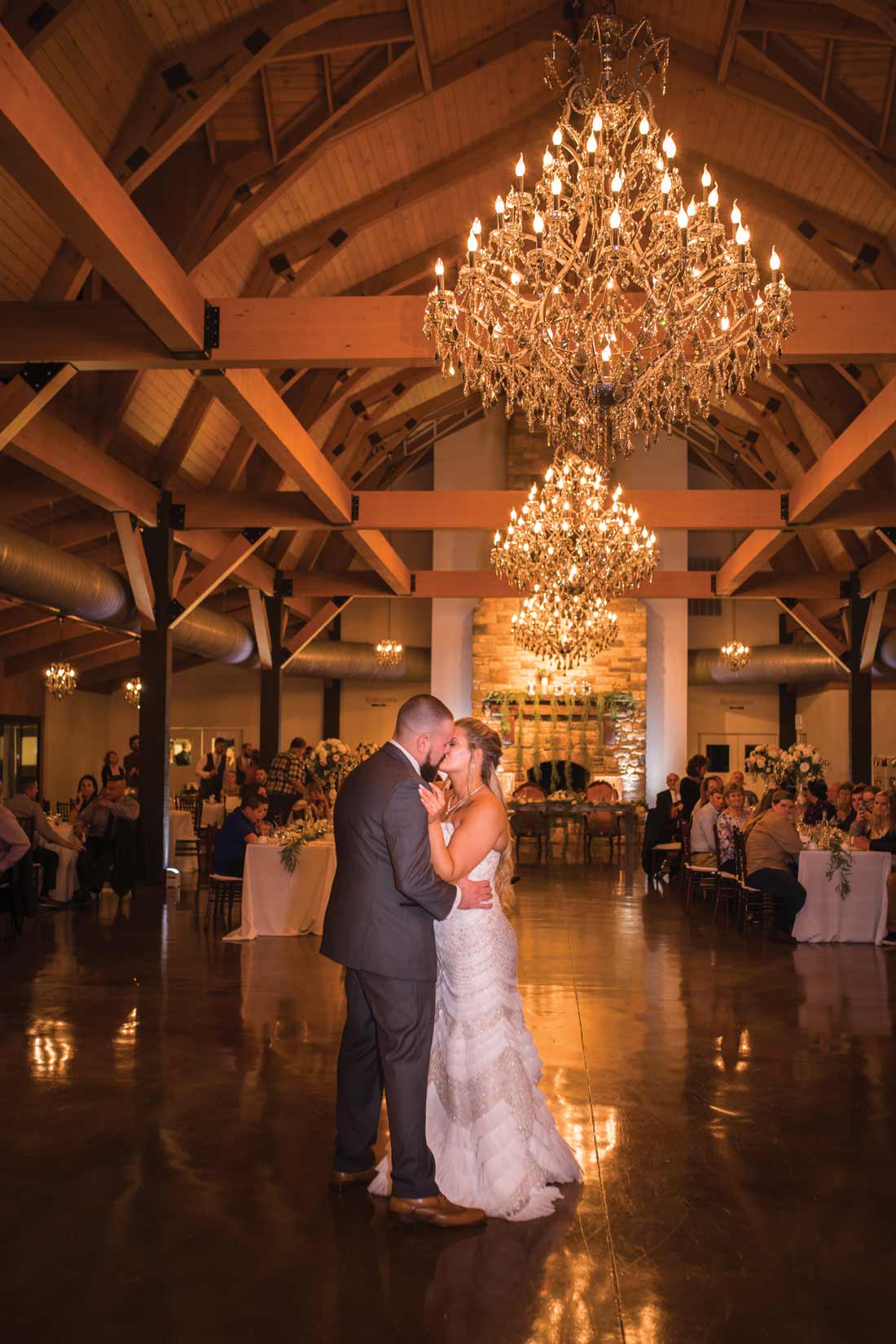 Their bad luck continued. Instead of a video, they “ended up with about 500 quick-action pictures,” Doug explains of the snafu. A lightbulb goes off in Nicole’s head. “I bet we could have someone string them together and make a video,” she suggests. A look that says “I’m busted” comes over Doug’s face and he confesses he deleted all but a few of the photos.

The evening ended in Reading, where they dined on “the worst Chinese food we’ve ever had,” Nicole reports.

Nicole admits she was “all over the place” and had “multiple visions” regarding a theme and look for the wedding. “I wanted a barn setting but I didn’t want to be inside a barn. And, I didn’t want a tent,” she explains. “Because we would have a lot of out-of-town guests, we wanted to have everything – rehearsal dinner, ceremony and reception – in one place.” 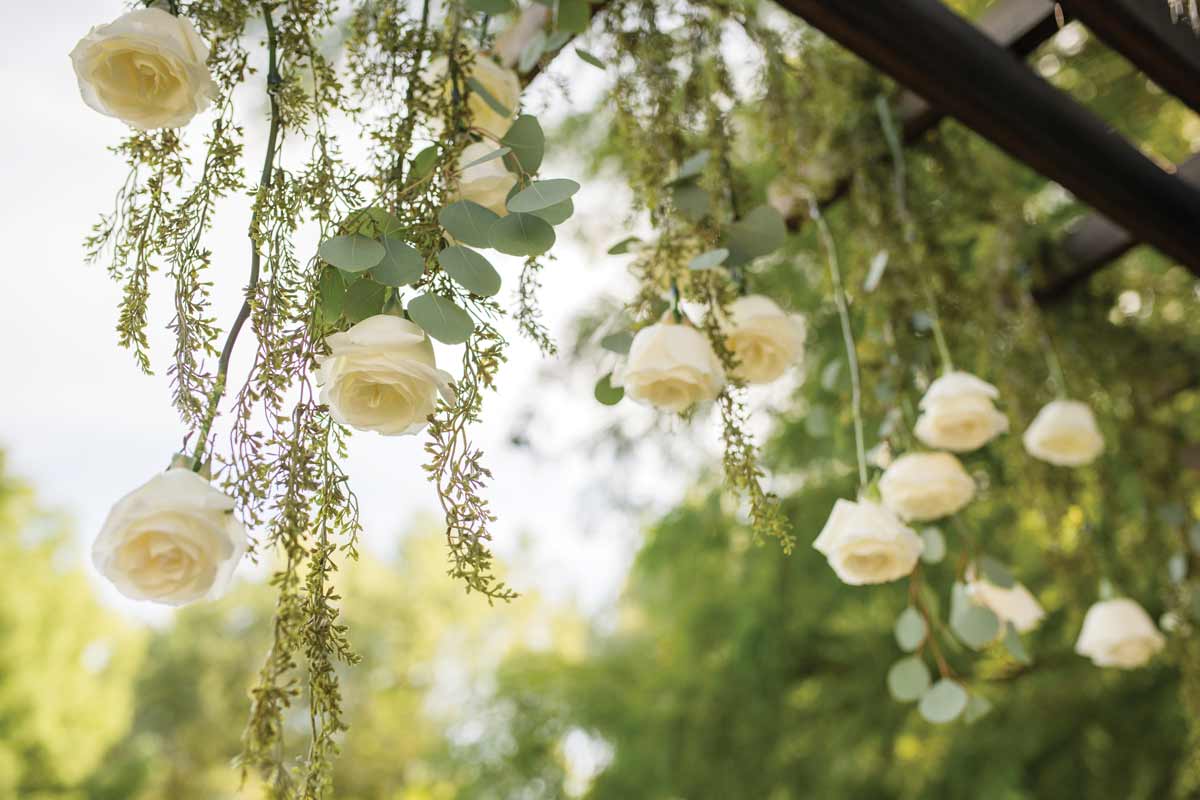 Roses and seeded eucalyptus decorated the pergola at the ceremony site.

What Nicole does like is a rustic vibe. She is also a fan of vintage and anything pink. Her very organized aunt, Angie Kunkle, who is a teacher by day, volunteered to help her focus on a vision and serve as the planner/coordinator for the wedding.

“I bet we looked at 15 venues,” Nicole recalls. “When we saw Historic Acres of Hershey, I knew that was it.” The property, which is located between Elizabethtown and Hershey, offered everything she desired, including a lakeside ceremony spot, a barn-inspired indoor-outdoor pavilion for the reception, gardens and a 19th-century farmhouse that is made available to wedding parties.

Working with Angie, Nicole arrived at a theme that would match the setting: Rustic Enchantment. 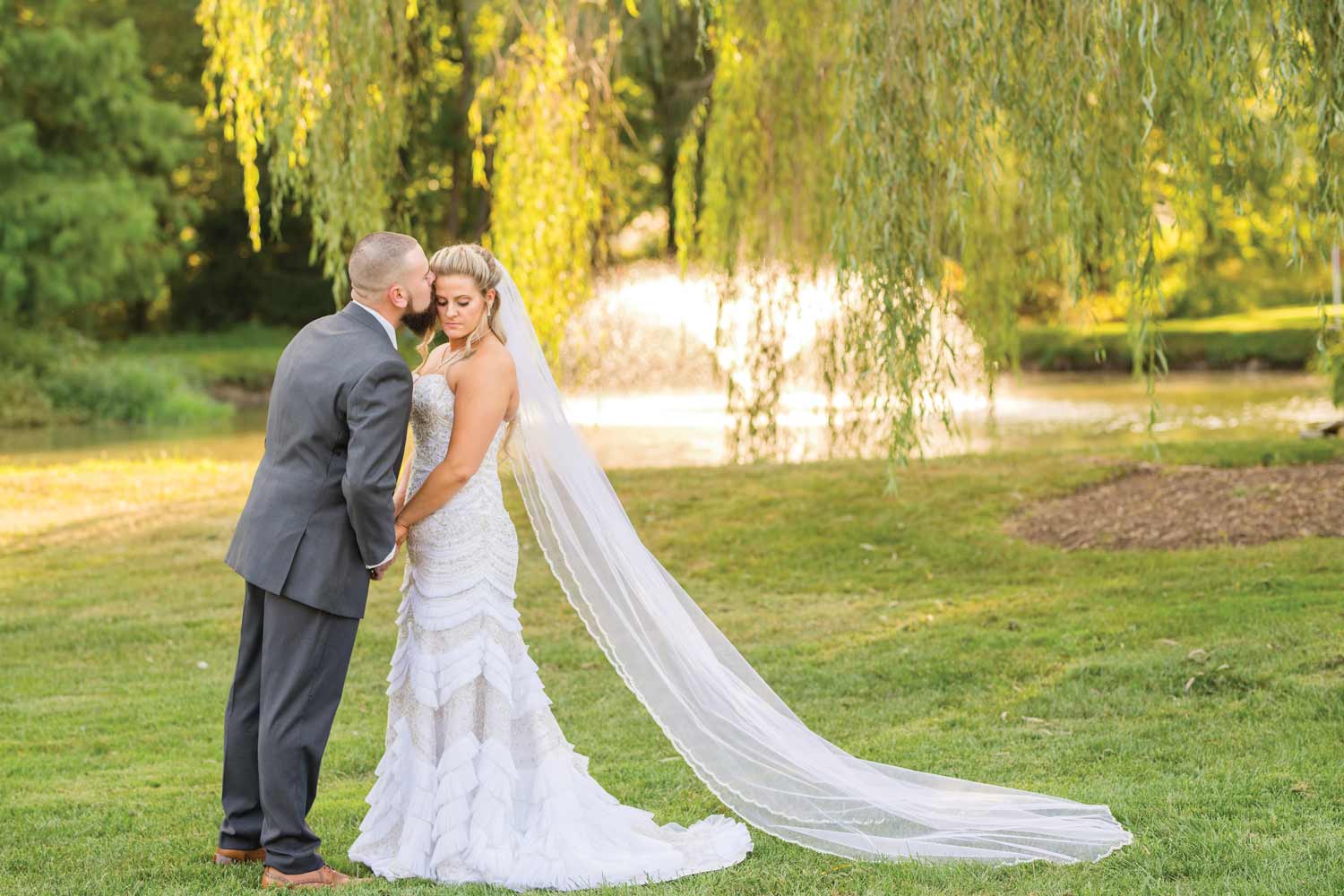 Saying Yes to the Dress

Like many women, Nicole and her mother, Bobbi, are huge fans of the television show, Say Yes to the Dress, which is filmed at the legendary Kleinfeld Bridal in New York. “I knew she had her heart set on going there but I suggested we start by visiting local shops,” Bobbi recalls. 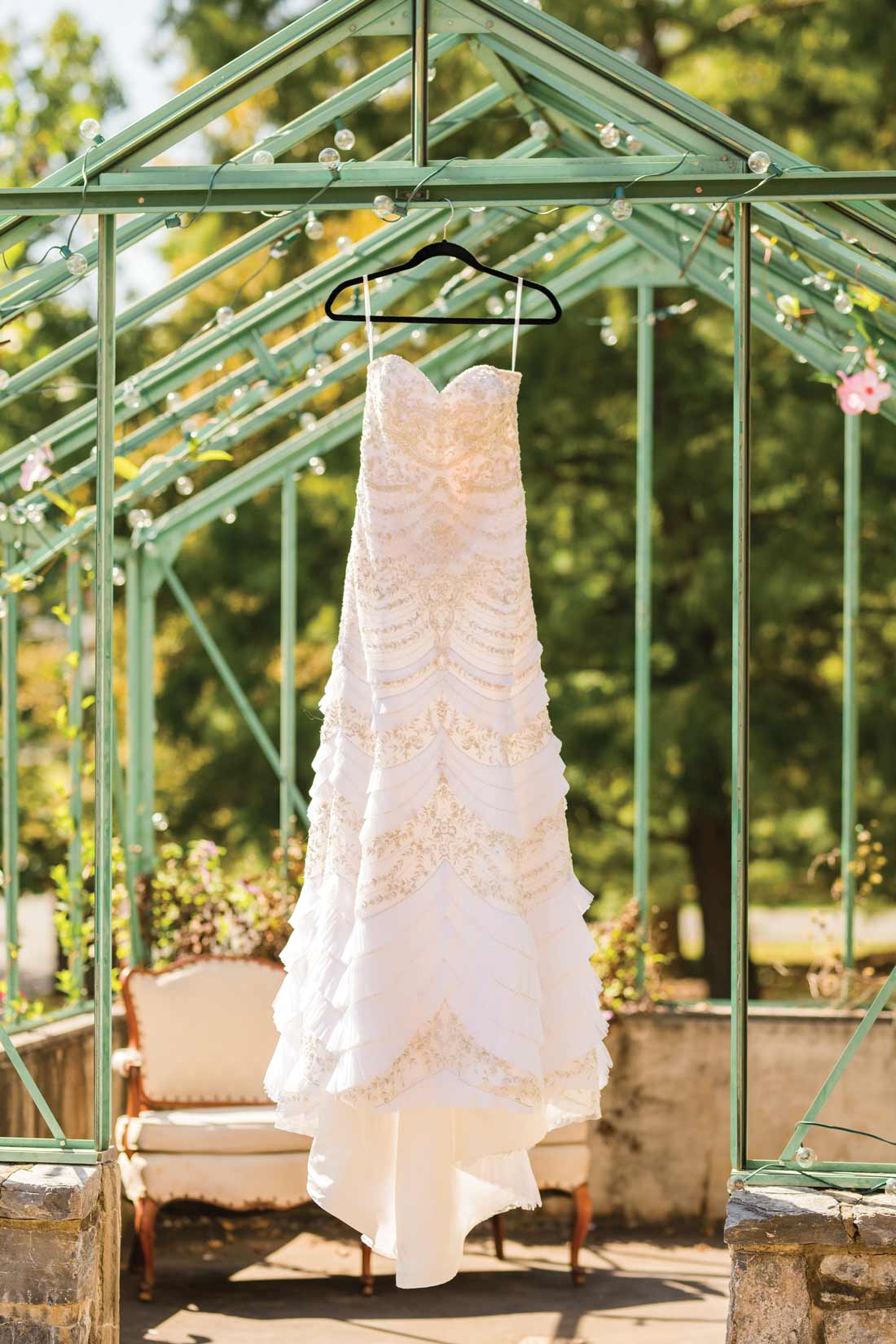 Finally, Bobbi gave in to Nicole’s Kleinfeld obsession and scheduled an appointment in April 2018. Just as is conveyed on television, walking into Kleinfeld’s was like experiencing nirvana. “It’s beautiful!” Nicole says. “It was packed!” Bobbi recalls, adding, “We saw Diane!” referring to one of the consultants who has been a mainstay of the show since its debut. Despite filming taking place, they were disappointed to learn that Randy Fenoli wasn’t in the store that day.

Nicole said yes to a gown from Enaura Bridal, whose owner/creative director, Sohil, studied the art of beaded design in India and upon returning to the United States, launched Blossom Veils in 2011. Two years later, he founded Enaura Bridal with a vision of combining exquisite embroidery, intricate beadwork and beautiful fabrics to create very modern gowns that evoke a vintage aesthetic. Nicole’s strapless gown, which was made in India, entailed a trumpet silhouette, a sweetheart neckline, scalloped beadwork and ruffled tulle accents. A cathedral-length veil completed her bridal look. 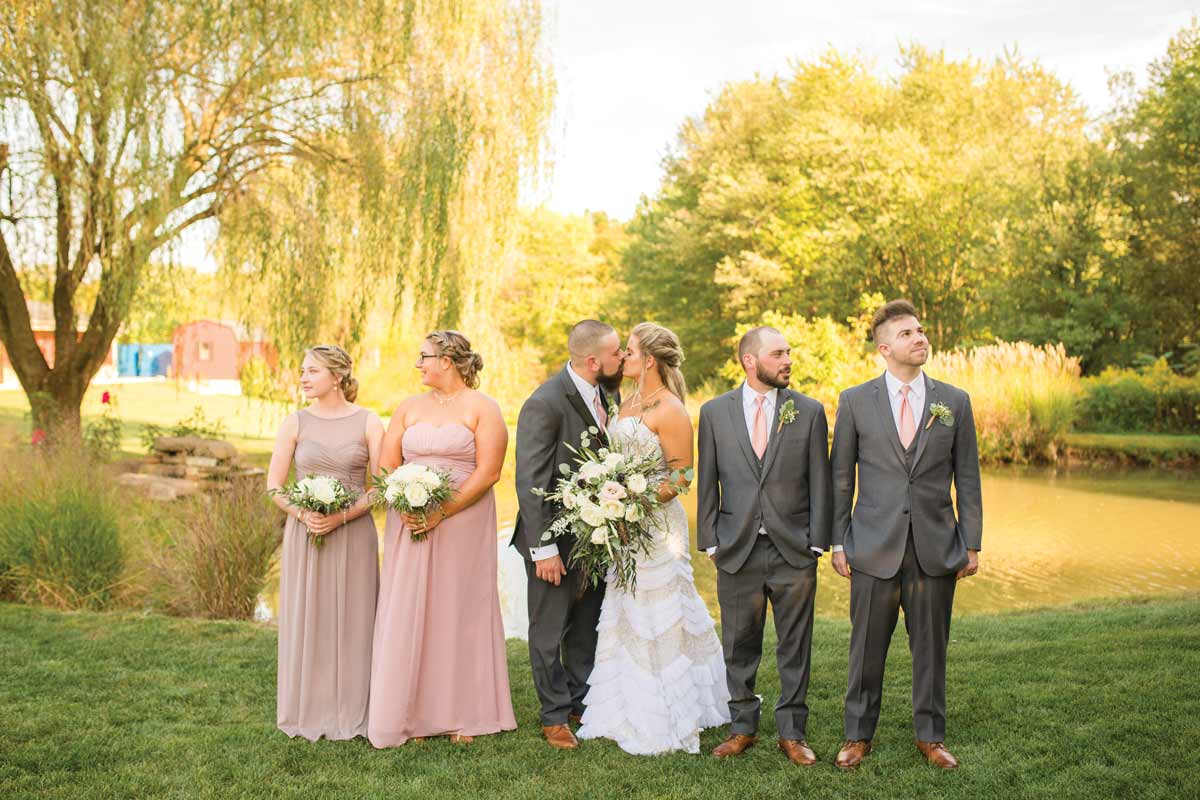 Pink was utilized for the color of the attendants’ dresses and for the ties Doug and his groomsmen wore.

In ordering a dress, Nicole assured her consultant she would be 20 pounds lighter by her wedding day – courtesy of her trainer, Eric Schwarz of Showtime Training in Lititz – but she was encouraged to order the size she was at her appointment, as it’s easier to take in a gown than it is to let one out. True to her word, Nicole lost the 20 pounds, which required three trips to New York for fittings. For the last appointment, Doug and Nicole’s father went along and took in a Yankees game.

Nicole incorporated her love of pink into her bridesmaid dresses, the ties Doug and his groomsmen wore (which beautifully complemented their charcoal-gray tuxes) and the floral designs. Her bouquet entailed roses, eucalyptus, dried berries and baby’s breath. 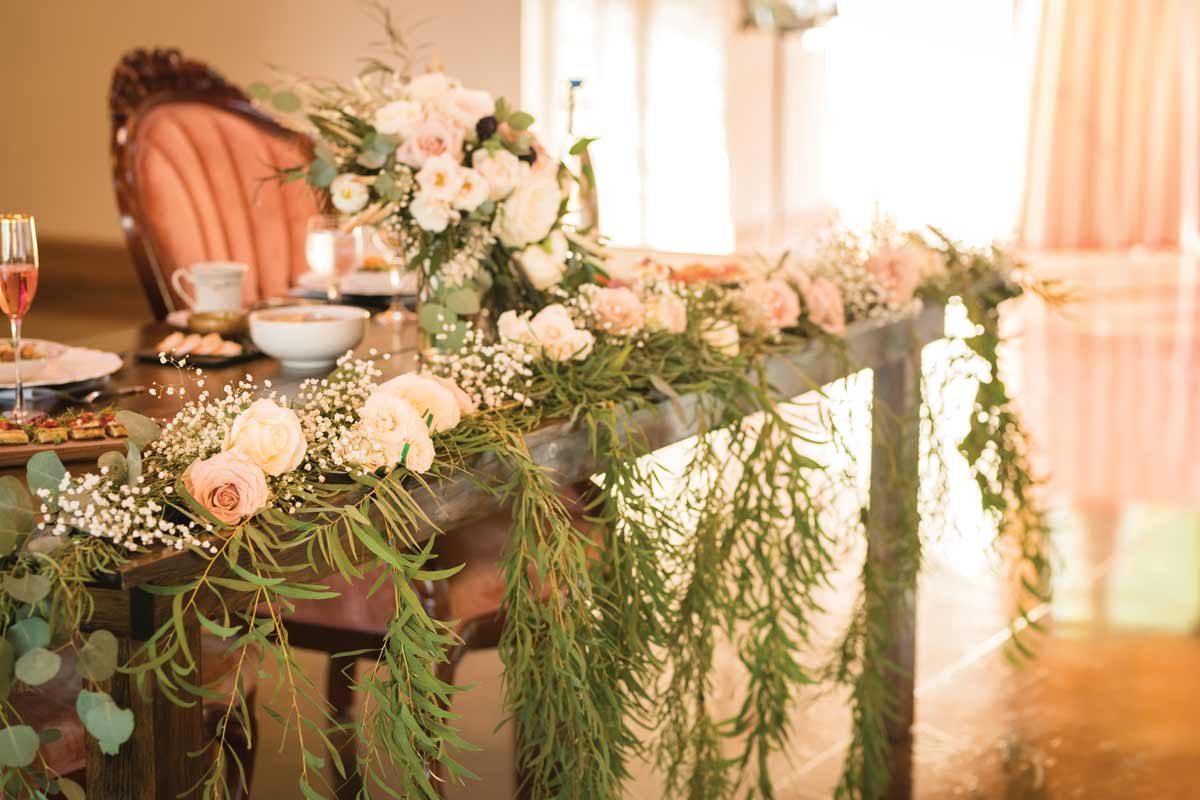 Nicole’s love of pink and vintage were reflected in the couple’s sweetheart table.

Wishing to complement the farm-like setting, they worked with The Scarlet Runner to design a farm-to-table-inspired menu that started with cocktail hour and continued through the seated dinner.

The simplicity of the cake design belied its dynamic layers of flavor, including lemon-strawberry, white raspberry, chocolate and orange-chocolate. 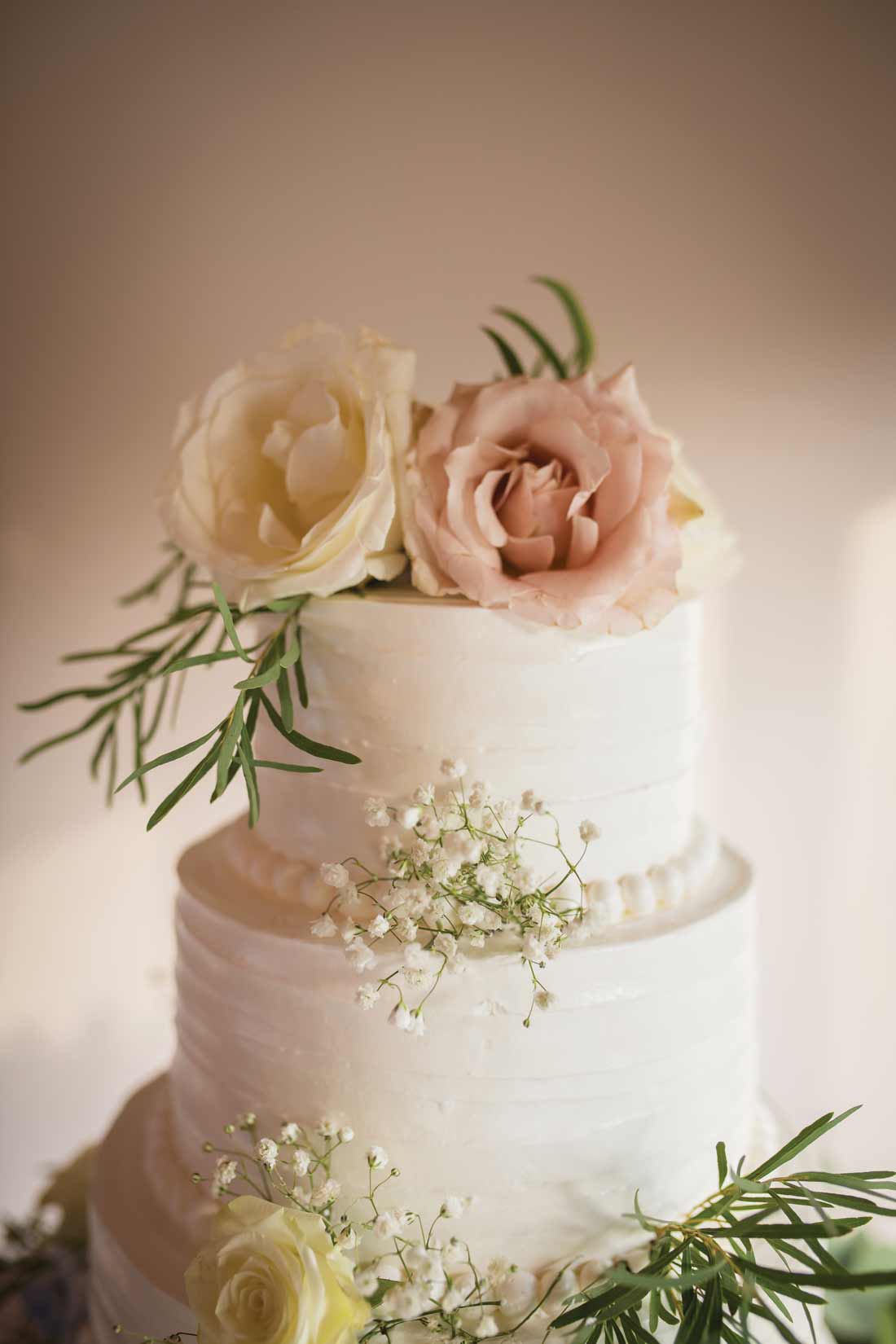 Each layer of the cake featured a different flavor.

The couple and their 120 guests danced the night away to tunes provided by Klock Entertainment, starting with the first dance that featured Perfect by Ed Sheeran and Speechless by Dan + Shay.

Guests could also socialize at the cigar bar and around a fire pit. Vintage furniture was rented for the occasion.

Instead of a first look, Nicole and Doug met at a corner of a building and without looking at each other, exchanged notes they had written to each other. They read them privately and then departed for the ceremony. They also exchanged gifts with each other during the reception. They were touched by the video their friend, Justin Rosado, made that included “interviews” with guests. 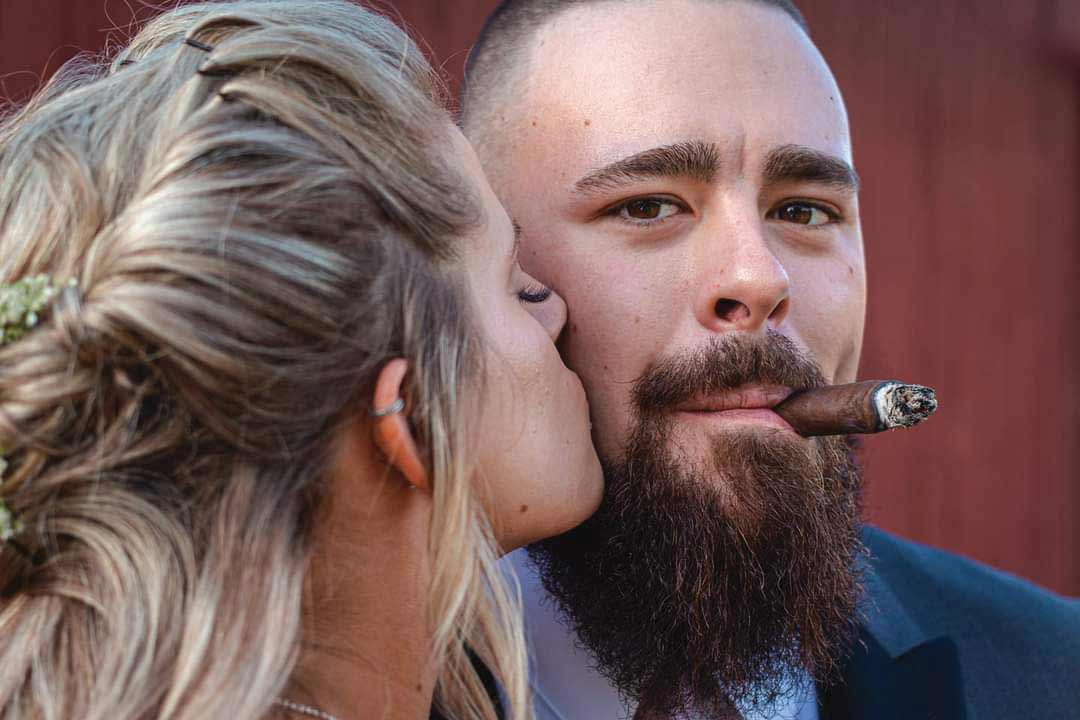 One of Doug’s favorite wedding details was the cigar bar.

Nicole was surprised by the speed in which venues are reserved. “Make that the first thing you do,” she says. They loved having their wedding on a Friday, pointing out that it takes the party atmosphere up a notch and doesn’t tie up an entire weekend for guests. Doug was surprised by how fast the day flew by and advises couples to enjoy the results of all the work and planning that they devoted to their weddings. 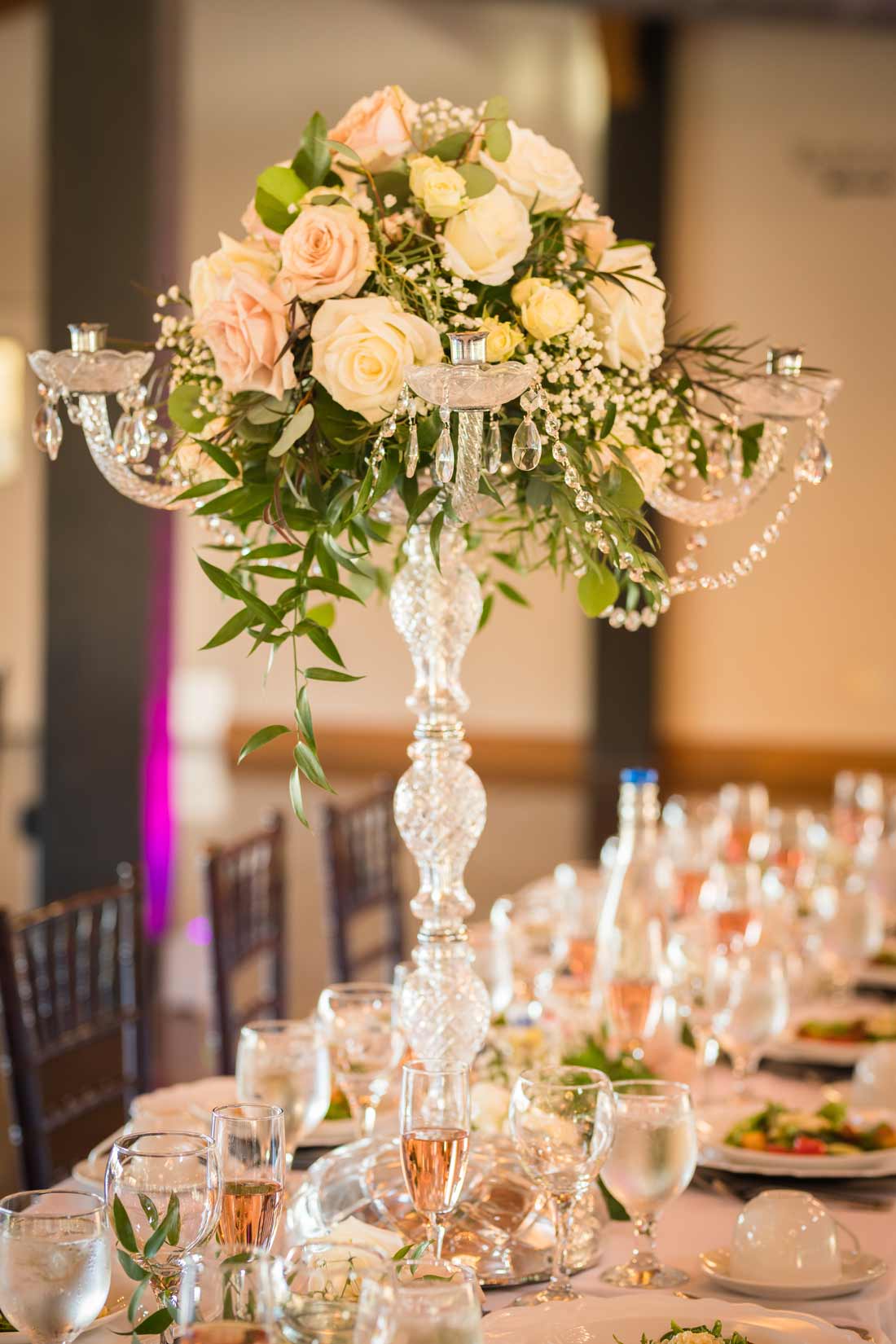