It’s been more than 100 years since a wild wolf was known to live in Pennsylvania. However, there’s one place in Lancaster County where the howls still echo at dusk – the Wolf Sanctuary of Pennsylvania.

The sanctuary is nestled along Hammer Creek in Elizabeth Township, among the heavily wooded northern edges of Lancaster County. The property is particularly endearing; it’s a place where history and nature come to life. Dating to 1760, Speedwell Forge was built by James Old. He took a young man from Ireland – Robert Coleman – under his wing and taught him about the iron ore business. Coleman married Olds’ daughter and went on to establish his own empire. The land remained in the Coleman family until 1942, when they sold 1,000 acres of the historic Speedwell Forge property to Gerald and Kathryn Darlington.

How did wolves come to roam the property? Nearly 40 years ago, it became illegal to keep wolves as pets in Pennsylvania. Having a few wolves as his best friends, the Darlingtons’ son, William, was faced with the prospect of having to relinquish them to the authorities. However, he had a better idea and decided to file the appropriate paperwork to keep the wolves. His mission met with success. Then, the Pennsylvania Game Commission came to William with a wolf in need of a home, and the sanctuary was born.

Originally opened as a private wolf refuge, the Wolf Sanctuary of Pennsylvania has provided a safe home for dozens of wolves that would have otherwise been euthanized. The sanctuary provides a healthy and stimulating environment through which the wolves can also act as ambassadors to the preservation of their species. They are living reminders of the motto, “Extinct is Forever.” In recent years, William’s daughter, Dawn, has grown the sanctuary into an environmental education center through which the thousands of people who visit in a year’s time can learn about the biology and conservation of wolves.
I have vivid memories of visiting the sanctuary on a field trip as a kid. Now I get to experience it all over again through my children; I enjoy sharing their excitement and the wonder in their eyes as they learn about these beautiful and fascinating creatures.

The sanctuary offers wonderful public and private tours throughout the week on a year-round basis. A favorite with fans of the wolves are the full-moon tours (the next one is November 4). Other special educational events fill the calendar, as well.

There’s also a relatively new aspect of the sanctuary. In 2005, Dawn saw her dreams become a reality, when she finished restoring the ironmaster’s mansion and re-opened it as the gorgeous Speedwell Forge Bed & Breakfast. It was added to the National Register of Historic Places in 2006. While Dawn is honored to host guests in one of the three mansion rooms or in one of the three more secluded cottages on the property, she is also honored to be carrying on the legacy of the wolf sanctuary started by her father.

The sanctuary is only able to continue its important conservation work through the generous donations of its supporters and visitors. This year the sanctuary will be taking part in the Lancaster Community Foundation’s Extraordinary Give event on November 17. Be sure to visit extragive.org on Lancaster’s biggest day of giving and show your support for the wolves and their cause!

To learn about the Wolf Sanctuary of Pennsylvania, visit wolfsanctuarypa.org. For the B&B, visit speedwellforge.com. 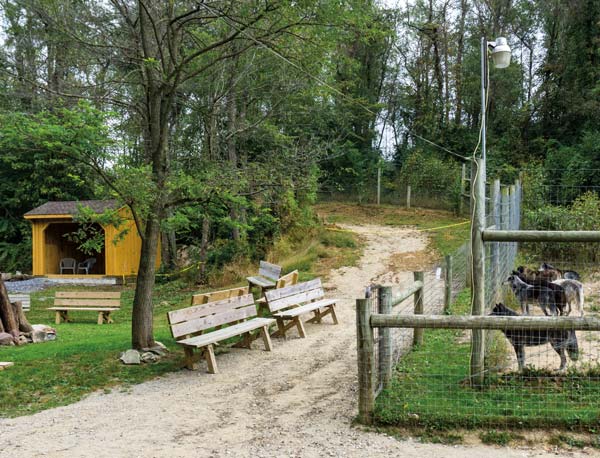