Twenty-two years ago, Elaine Bowman built a home on 2.75 acres of land in West Cocalico Township that had originally been deeded to her family by Thomas and Richard Penn in 1728. In designing the house, Elaine’s goal was to combine the amenities of modern-day living with antiques, family treasures and finds that relate to the area she has always called home. 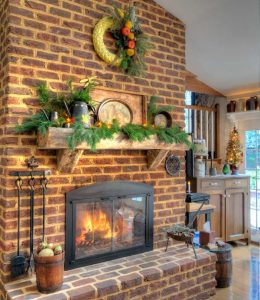 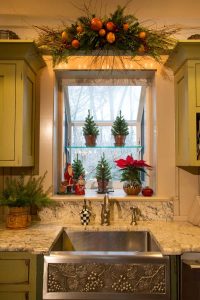 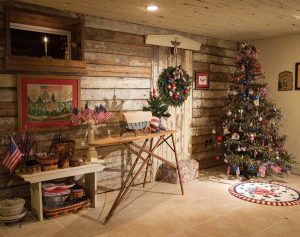 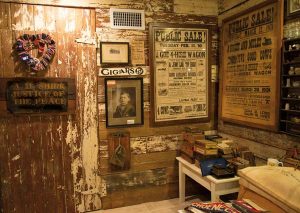 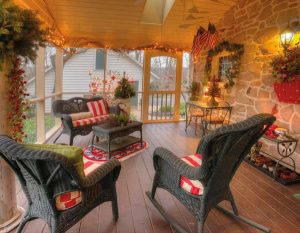 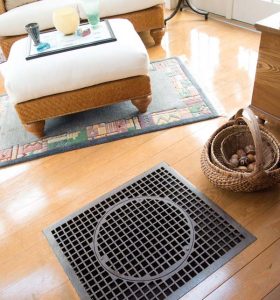 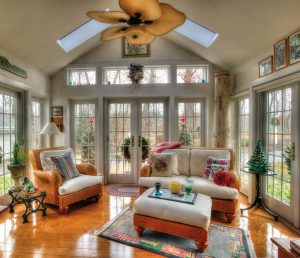 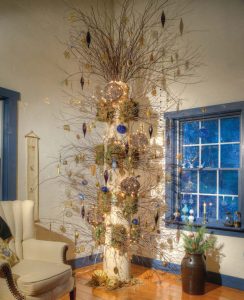 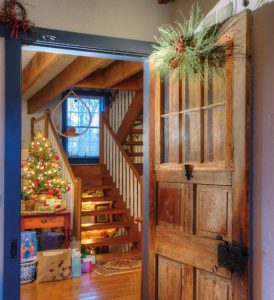 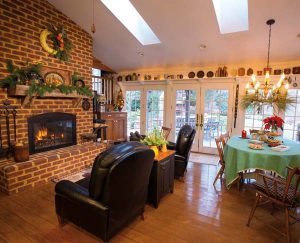 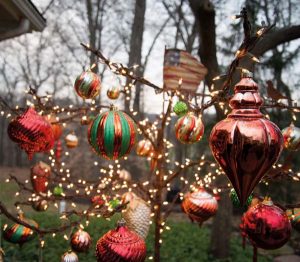 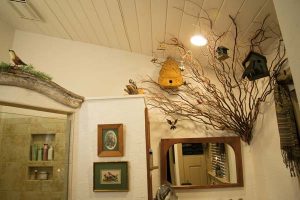 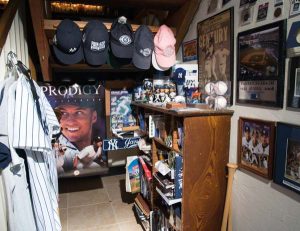 “Essentially, I wanted a modern house that looks old,” Elaine explains. “And, it had to be livable and user-friendly.” Elements such as butter plaster, barn-wood floors, wooden beams and a staircase that replicates one she always admired in her grandparents’ farmhouse helped her to achieve that goal.

Additionally, a connection to nature was achieved through various outdoor-living areas and expanses of windows and glass doors that define the great room and master-suite sitting room.

“I was fortunate to work with people who got what I was trying to do,” she says of builder Donald Sensenig, Stoltzfus Cabinet Shop in Talmage, Andy Wood, a retired teacher turned remodeler, and Dwight Graybill of Cocalico Builders, who created the outdoor fireplace and patio expansion and is on speed dial to incorporate Elaine’s finds into the ever-evolving design of rooms and outdoor spaces. She describes her collaborators as “talented people who possess the gift of
listening – they ‘get’ me.”

Elaine and Dwight share history of another sort – she was his 8th-grade teacher at Cocalico Middle School. Elaine says she knew she wanted to be a teacher from the time she was in 4th or 5th grade. “Fortunately, I had a mother who recognized that girls had options,” she says of growing up in the late 50s.

Merla Shirk Hulshizer was indeed a fitting role model for her daughter. In addition to the traditional roles of wife and mother, she was Cocalico School District’s first school nurse. She was also an aspiring historian, as she collected artifacts and memorabilia that related to the Schoeneck area. For example, she had the foresight to inscribe her name and address on one of her father’s envelopes – Alger H. Shirk, Elaine’s grandfather, was the area’s Justice of the Peace for 40 years – and mail it to herself on November 28, 1972, which was the last day of operation for the Schoeneck Post Office. Elaine now possesses the envelope.

Merla also involved herself in a variety of civic activities. And, she was a budding artist who dabbled in painting toleware, some of which decorates the mantel in Elaine’s great room.

Elaine also inherited a love of the land from her mother. “I developed an appreciation for the deep roots that we have on this land from my mother,” she notes, sharing that the most cherished gift she ever received from her is the acreage on which she lives. “As kids, we roamed all over the 100 acres that our grandparents owned,” Elaine says of herself, her sister, Barbara Wilson, and her brother, Gilbert Hulshizer.

The 100 acres were part of the original Penn Grant – comprised of nearly 800 acres – that was made to Swiss-born Ulrich Sherrick (later shortened to Shirk). “She bought a tract of land during the sale that was held for my grandfather’s estate and divided it into three plots – for me, my sister and my brother,” Elaine explains of her mother’s gift. Technically, the plots weren’t gifts. “She charged each of us $1,” she adds.

Elaine followed her mother’s advice and set her sights on a career in teaching. She earned her teaching degree from East Stroudsburg University and administrative degrees from West Chester and Widner universities. Her first job in 1965 took her to Annville-Cleona High School as a health and physical education teacher; she returned home to teach in the Cocalico School District in 1969.

She retired in 2005, took six weeks off and then accepted a succession of what she calls “rent-a-principal” assignments in the Ephrata, Penn Manor and Cedar Crest school districts. “One day I realized I was old enough to be the students’ great-grandmother and said, ‘Enough is enough,’” she recalls. She adds that she came away from her assignments “impressed by the amazing school systems we have in Lancaster County,” further noting, “This county is filled with a lot of people who are dedicated to our schools.”

Like her mother, Elaine is a history buff. “My mother was always interested in local history, and she collected a lot of stuff that related to it. I always listened to her stories, but I didn’t really gain the appreciation I have for it now until I was older. I suppose that it’s true that with age your appreciation for such things deepens,” she theorizes. Furniture, artifacts, antiques, public sale notices and other collectibles that relate to the northern end of the county decorate the house. “I believe in using the stuff,” she says. “Why hide things?” Always the teacher, Elaine can share stories and the historical connotations of everything in her house.

Her interest in history led Elaine to become a member of the Historical Society of the Cocalico Valley and the Historic Preservation Trust of Lancaster County (she’s a board member for both organizations). She’s also the proud president of the Schoeneck Veterans Memorial Association, which oversees the memorial that was dedicated on Memorial Day 2011.

Elaine also has an artsy side, which is most evident in her living room. What appears to be a creative take on a Christmas tree stands in a corner of the room. Take a closer look and the tree trunk is actually an architectural column. The columns, she explains, were removed from the Abraham Lincoln Hotel in Reading during a refurbishing project. “I bought four of those,” she reports.

The idea of making one into a permanent “tree” for displaying the ornaments she has accumulated through traveling the world – 40 countries and 35 or so states to date – occurred to her. “I knew what I wanted to do, but I didn’t know how to go about doing it,” she explains. So, she did the logical thing and called upon another pro who gets her – floral designer Kerry Kegerise. Kerry devised a design that entailed blocks of moss-covered Styrofoam that were wired to the column. Tree branches were then inserted into the blocks to which Elaine’s ornaments were attached. White lights add sparkle. “I keep it up all year,” Elaine says. “It reminds me of where I’ve been.”

As was previously mentioned, travel is one of Elaine’s passions, and she often accompanied student groups for travel studies through the organization People to People. However, one of her favorite places in the world is just a three-hour ride away – Yankee Stadium in New York. If it’s game day, Elaine is known to jump in the car on a whim and head for New York. “I don’t know how I got hooked on the Yankees,” admits this die-hard baseball fan.

A nook under the staircase is dedicated to the team. The intriguing space is filled with photographs, baseball cards, Christmas and birthday cards from the organization, shirts, memorabilia and her most prized possession, her own jersey from the inaugural (2011) Women’s Mini Fantasy Camp that is held in Tampa each January. The camp was comprised of 72 women who ranged in age from 25 to 70. “I was one of the oldest girls,” Elaine says, adding that she and several other camp veterans hold a reunion once a year and take in a Yankees game.

Elaine’s love of baseball has prompted her to adopt a game-related viewpoint on aging. “I’m determined to go down swinging!” she says. 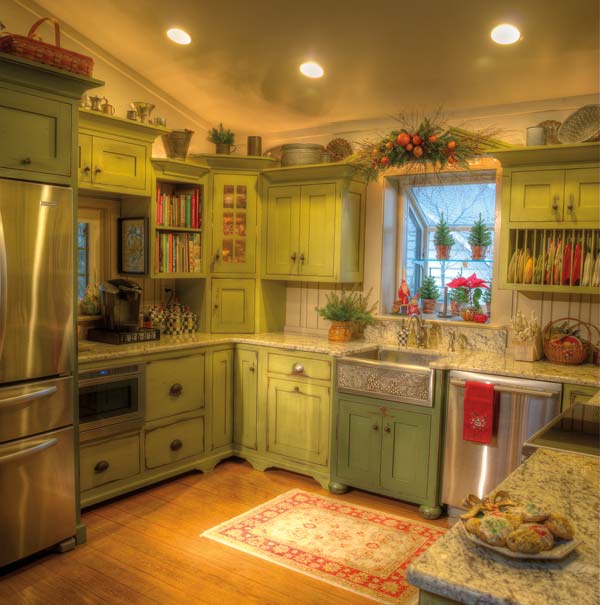