“I love old farmhouses,” says Geoff Class. The retired automotive executive also loves projects. A farmstead in the historic Weaverland Valley provided him with the best of both worlds. 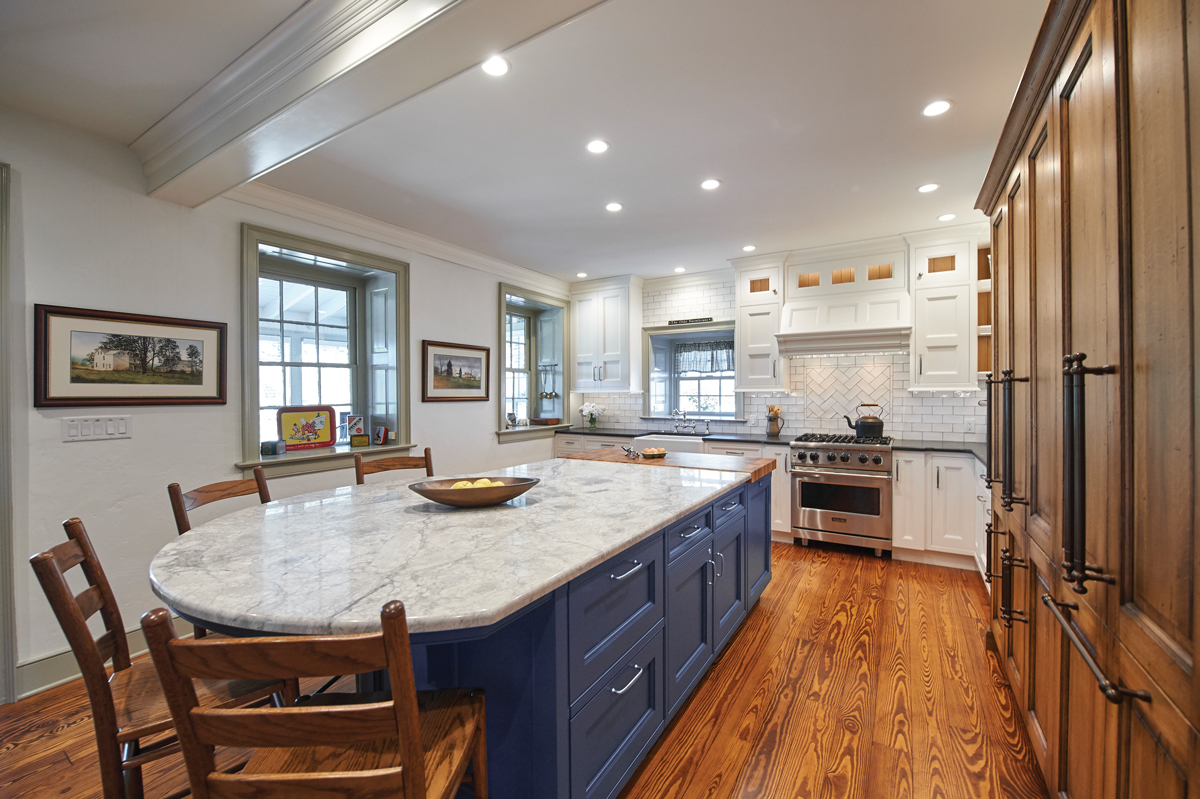 Years ago, Geoff and his wife, Kathy, built what they thought would be their forever home in New Holland. “The more I lived there, the more I knew I didn’t want to grow old there,” he admits. “I did all the projects I could to stay busy.” Kathy, however, was as happy as can be living “in town.”

What Geoff really wanted was “ground in the Weaverland Valley.” The valley that stretches from Terre Hill to East Earl was first settled by brothers Jacob, Henry, George and John Weber in 1718. Five years later, a settlement along the Conestoga River attracted other newcomers. In 1733, the Weaverland congregation was organized. Today, the roads that wind through the valley are primarily bordered by farms. Plain families populate the area. The scenery prompts you to slow down and take it all in. As the saying goes, “it’s a different world” once you turn off busy routes 23 or 322. 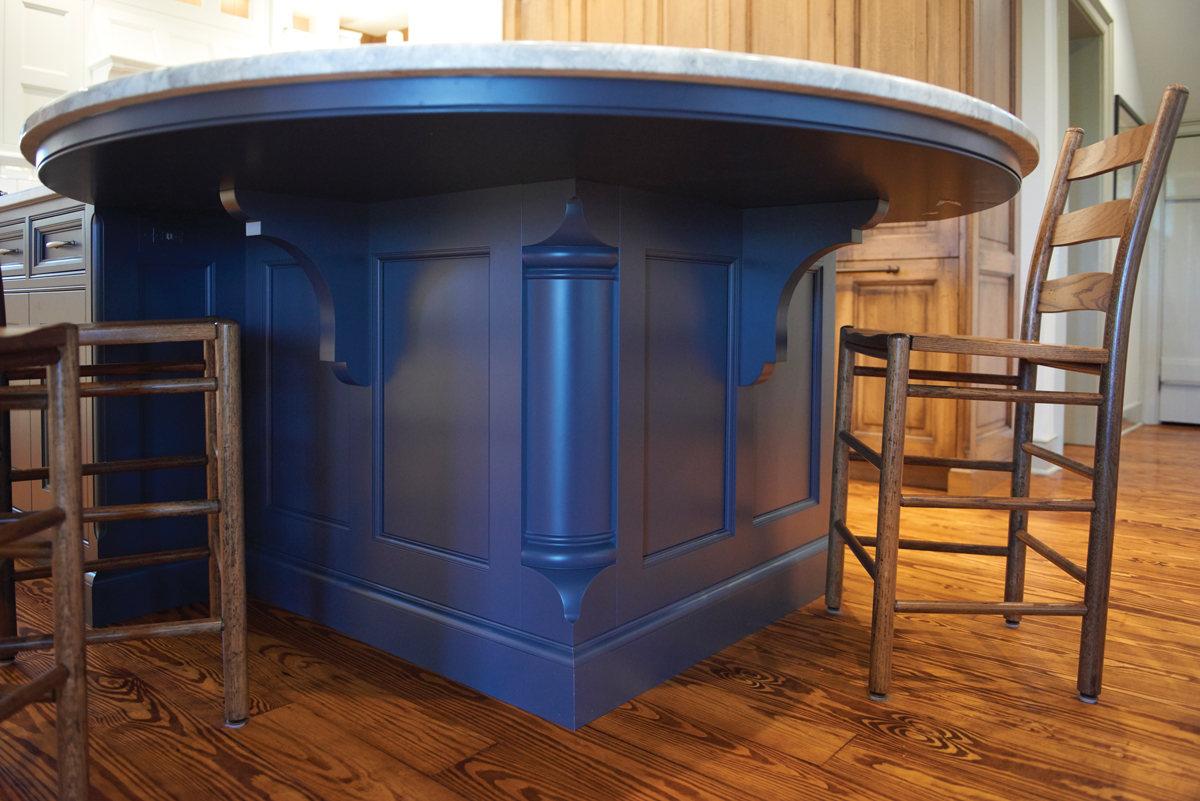 Geoff was also looking for an old farmhouse to satisfy his wanderlust. “I grew up in old houses,” he explains. In 1989, he spied what he was looking for – a farmhouse that dates to 1799. “It was in horrible shape,” he recalls. Nevertheless, he convinced Kathy to take a look at it. She was horrified. “You had to walk out the front door and around the house to get to the basement laundry,” she explains. On top of that, the property was overgrown, and the barns and other outbuildings looked as if they were ready to fall down. Her response? “I said, ‘No way!’” 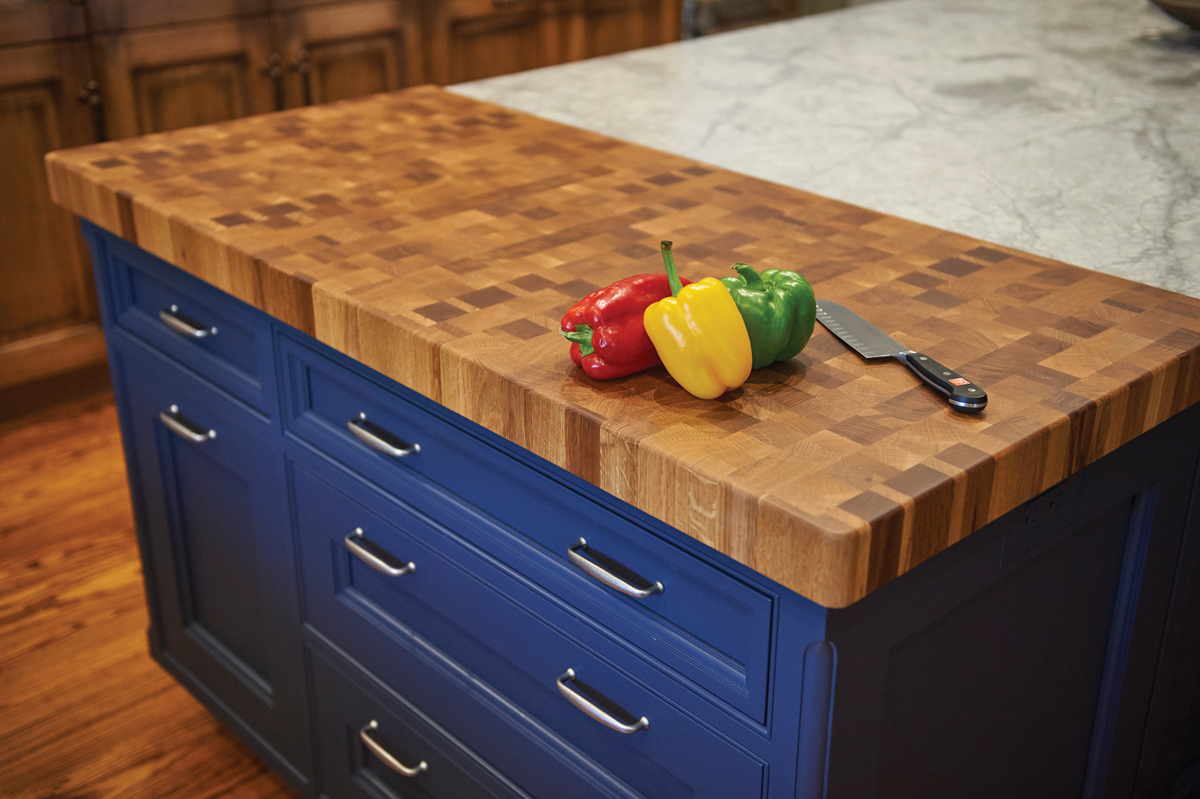 The farm eventually found a buyer. Years later, it was on the market, again. Once more, the Classes took a look and again passed on it. “Both owners had made a lot of improvements,” Geoff notes. 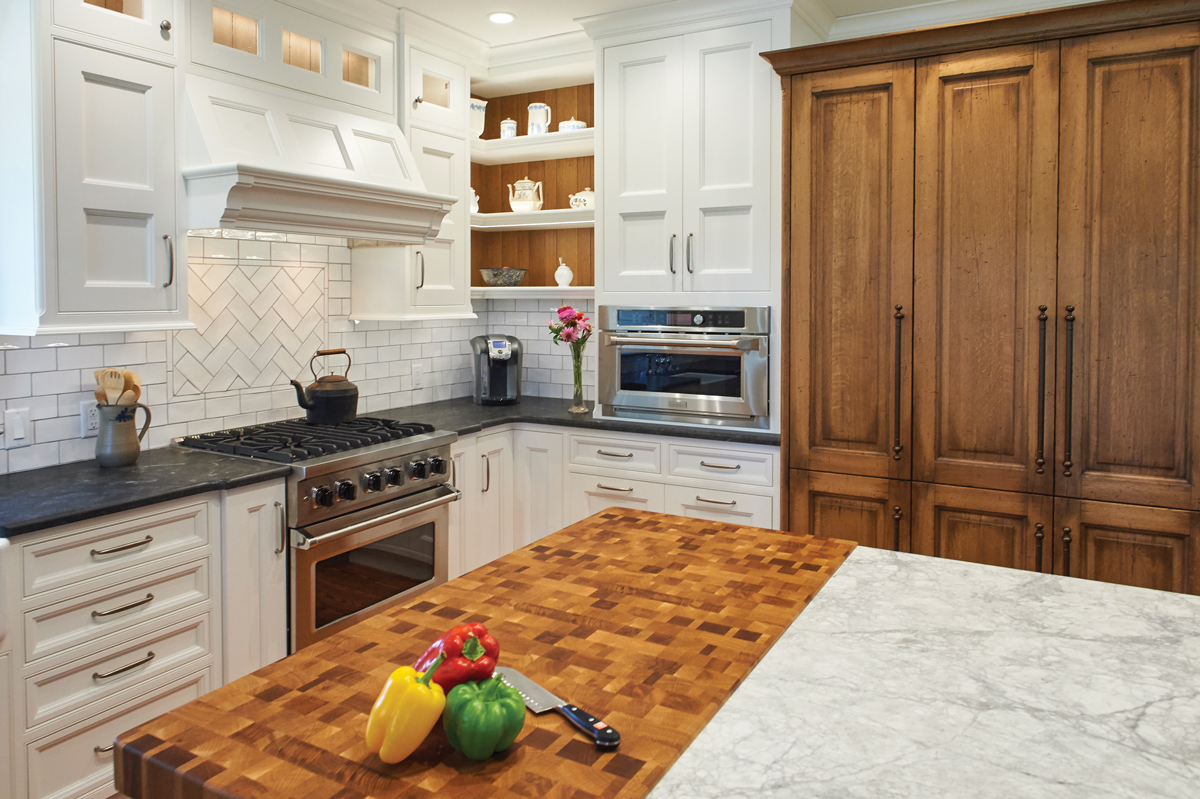 About eight years ago, the couple’s daughter, Rebecca Branle, who is a realtor (and co-owns Intercourse and Lititz Bikeworks with her husband, Mark), shared the news with her father that his favorite property was once again on the market. The Classes revisited the property and this time, Kathy said yes. With the sale, they also inherited four chickens, one rooster and a cat. 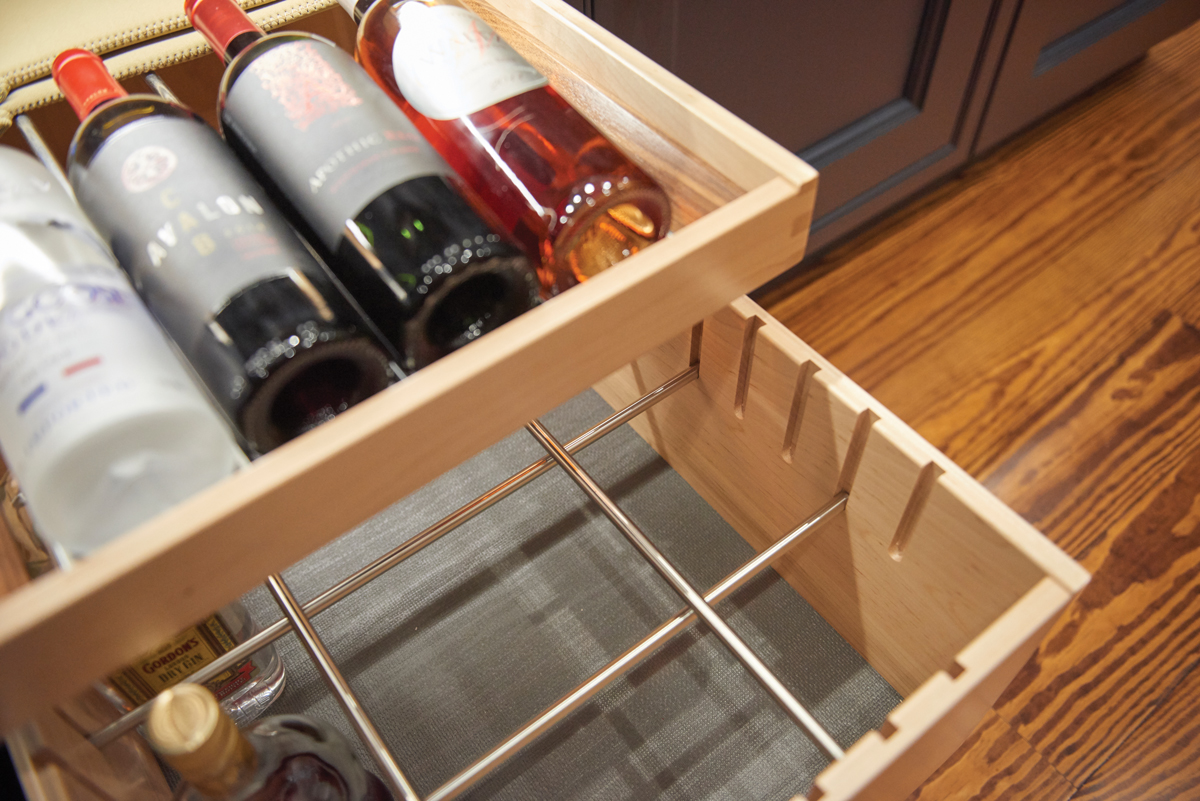 Geoff’s love affair with cars and Kathy dates back to the ‘70s. Both are from Doylestown, but because of their age difference, they did not know each other in high school. Years later, Geoff was home from service in Vietnam and Kathy was a secretary at Conroy Ford in Doylestown. “I’d walk by the showroom, see the salesmen, and think to myself, ‘That’s got to be the best job in town,’” Geoff recalls. Soon, he joined their ranks. Kathy helped him complete paperwork on his first day on the job. He soon asked her out and two years later, they were married. 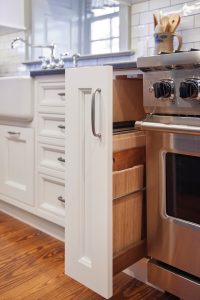 By 1981, Fred Beans, who had bought Conroy, was looking to expand and discovered a dealership in New Holland was for sale. Geoff was offered a partnership opportunity, so the Classes moved to Lancaster County. New Holland Ford – worth the time, worth the drive – became a destination for car buyers. “We grew from 16 employees to more than 200,” he says. Dodge and Toyota also were added to the fold. In January 2016, Geoff retired. He says he found the perfect buyer in Geoff Penske. “I still stop in a couple times a year,” he notes. “Plus, I get all my vehicles serviced there.” 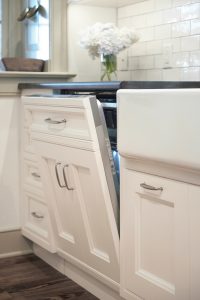 Of course, Geoff has had plenty to keep him busy thanks to the many projects he carried out over the last seven years. His to-do list included building a garage and creating an outdoor living area at the rear of the house that provides a view of woodland and the Conestoga River. Barns and outbuildings were restored, one of which serves as Geoff’s man cave.

A pool complex is a favorite gathering place for the family that also includes the Class’ other daughter, Tracy Welsh and her husband, as well as seven grandchildren. 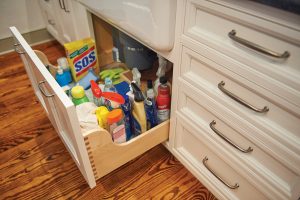 New landscaping and hardscaping beautifully frame the house, which was fully repointed. “I worked with Mel Weaver of Weaver Construction on a lot of the projects,” Geoff explains. Mel was familiar with the property, as he grew up two farms away. 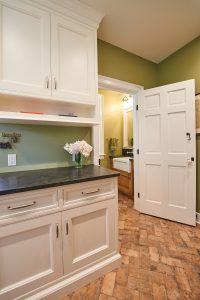 The interior of the house was also updated and remodeled. “These old houses never have closets,” Geoff notes. A major project entailed the creation of a master suite that encompasses most of the second floor in the addition that dates to the 1830s.

While the kitchen had been updated in the early 90s, it was looking dated, plus the lack of storage was an issue. In search of ideas, the Classes reached out to Jim Martin of Jim Martin Design for his perspective. 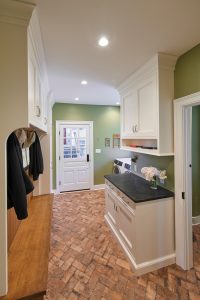 Jim, who studied cabinetmaking at Lancaster County Career & Technology Center, worked for an uncle’s construction company for a time and was an installer for Quality Custom Cabinets for 11 years. Always interested in the design aspect of cabinetry, he moved into sales in 2001. Wanting the flexibility to work with other companies and manage projects from start to finish motivated him to launch his own design/build company six years ago. “We’re small – it’s just me and my son,” he notes, “but our focus is on the quality of the experience versus quantity.”

Designing kitchens for period homes can be challenging, he acknowledges. Owners are often convinced that they must stay within the bounds of the period in which their home was built and downplay the conveniences of modern-day living. In Jim’s estimation, both can be addressed and in doing so, a “timeless” design can be achieved. “In this case, we wanted to preserve the character of 1799, but acknowledge that it’s the 21st century,” he explains. 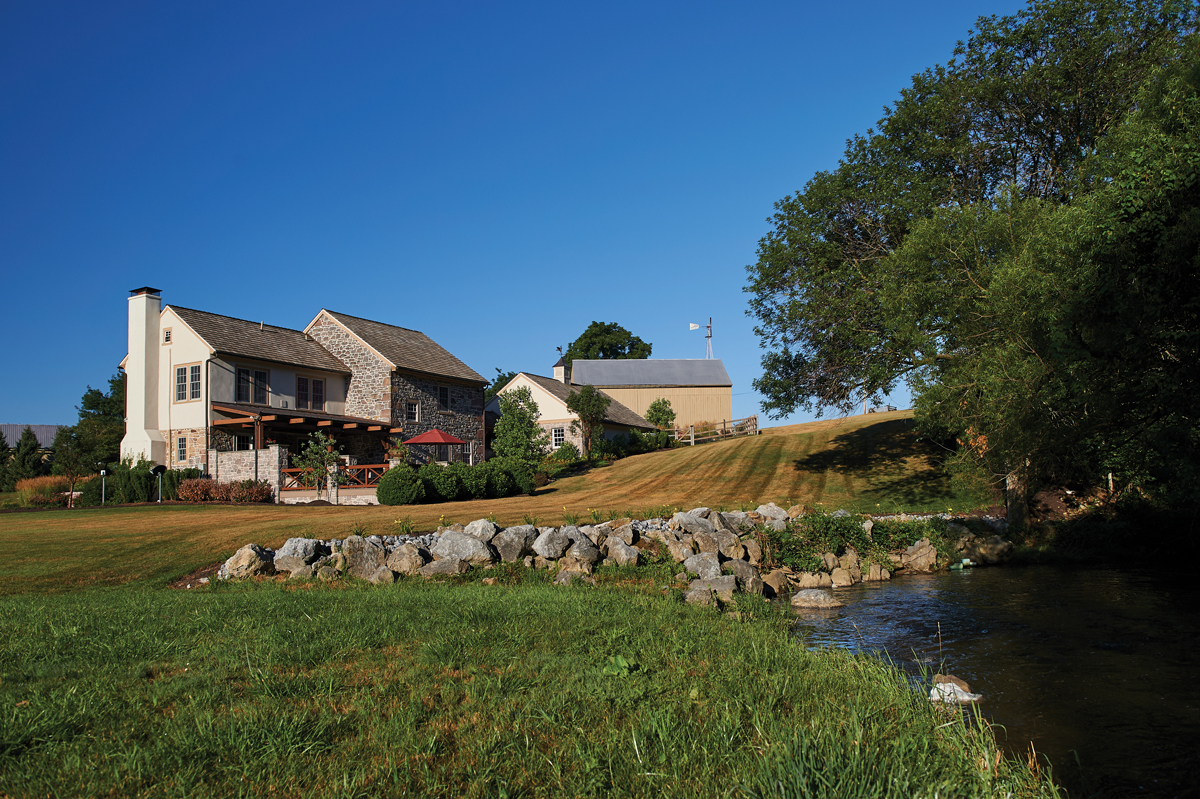 The 1700s are reflected in the Pennsylvania German corner columns that define the island. The brilliant blue color that paints the island’s base serves as a nod to Williamsburg. Quarter-sawn white oak and reclaimed wood add to the period look, as does the farmhouse sink and polished nickel plumbing fixtures and drawer pulls. The deep windows provide an instant link to the 18th century. 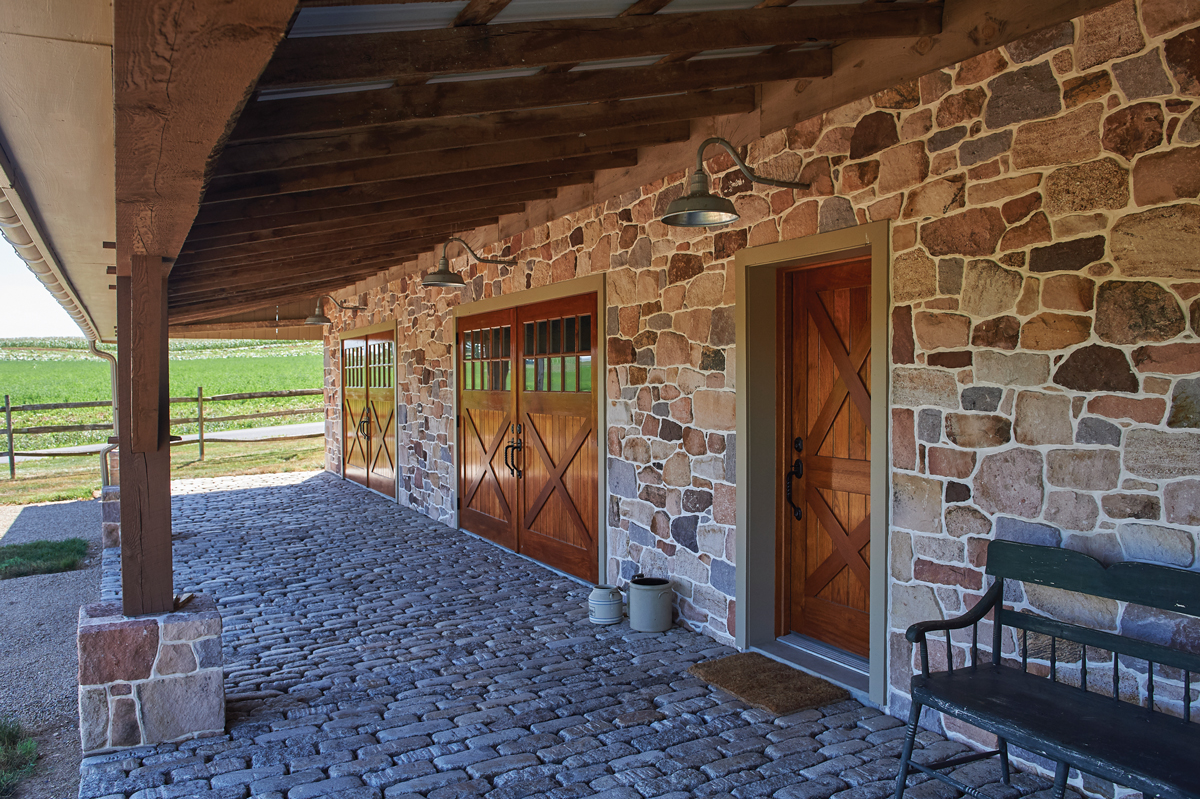 Cabinetry – raised panel and flushed recessed – from New Holland-based Premier Custom Built Cabinetry serves as a bridge between period and modern design. The company’s Stanford line, which takes its inspiration from Beaux Arts styling, is a combination of classic lines and modernist elements, making it suitable for traditional, transitional and even contemporary spaces. Counters topped with leathered granite and quartzite also lend themselves to the old/new look Jim aimed to create. 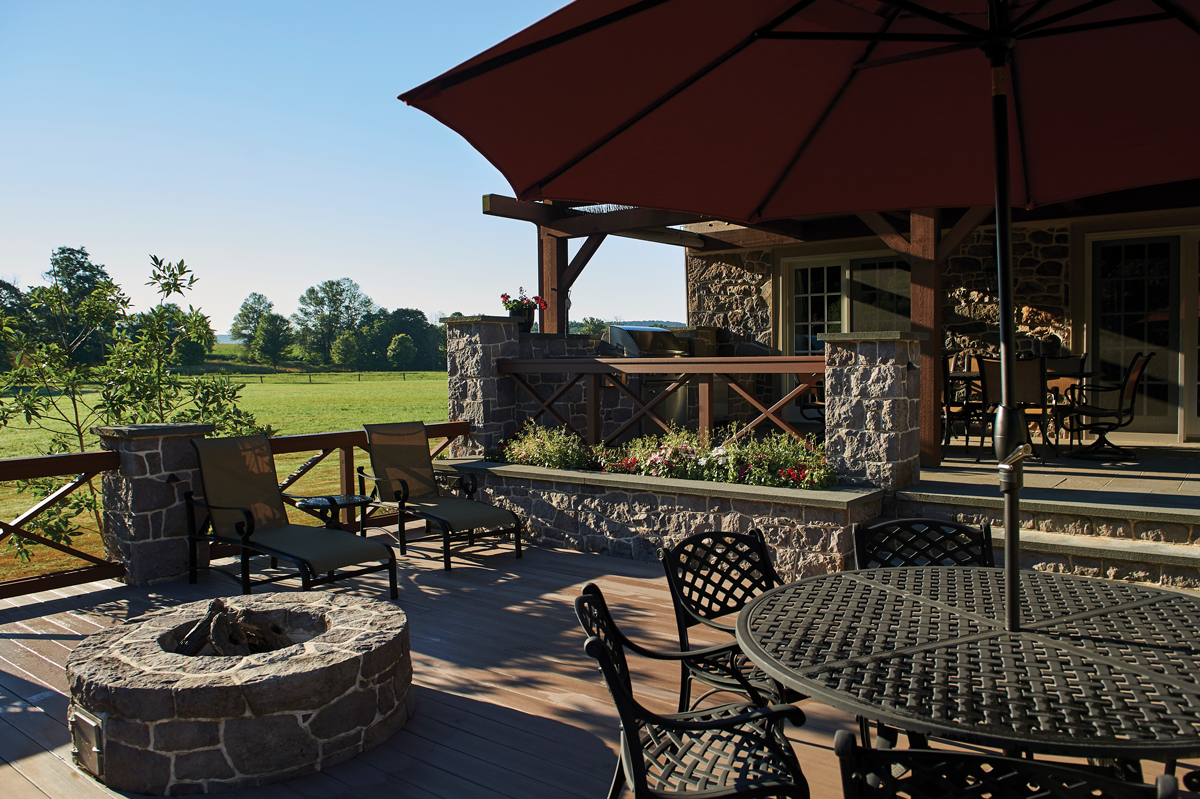 The final element, modern conveniences, is reflected in the generous amount of storage that is made available via the island, cabinets and pantry. Paneled appliances provide a seamless look throughout the kitchen. 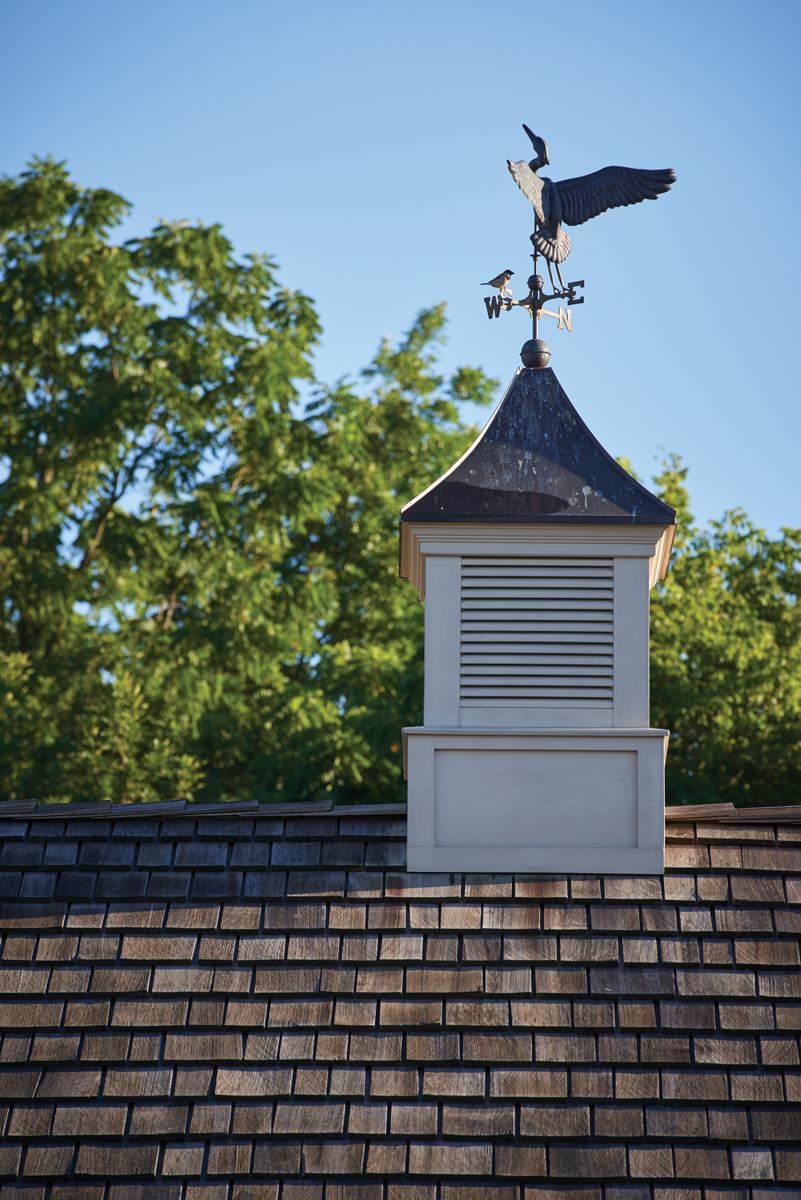 The kitchen has become a favorite place for the Class’ grandchildren to hang out. “They just love to sit around the island,” Kathy says, explaining that she purposely asked that it be oversized in order to accommodate everyone. In fact, the farm has become family-central, as it’s the go-to destination for holiday gatherings and family milestones such as birthdays and other celebrations. 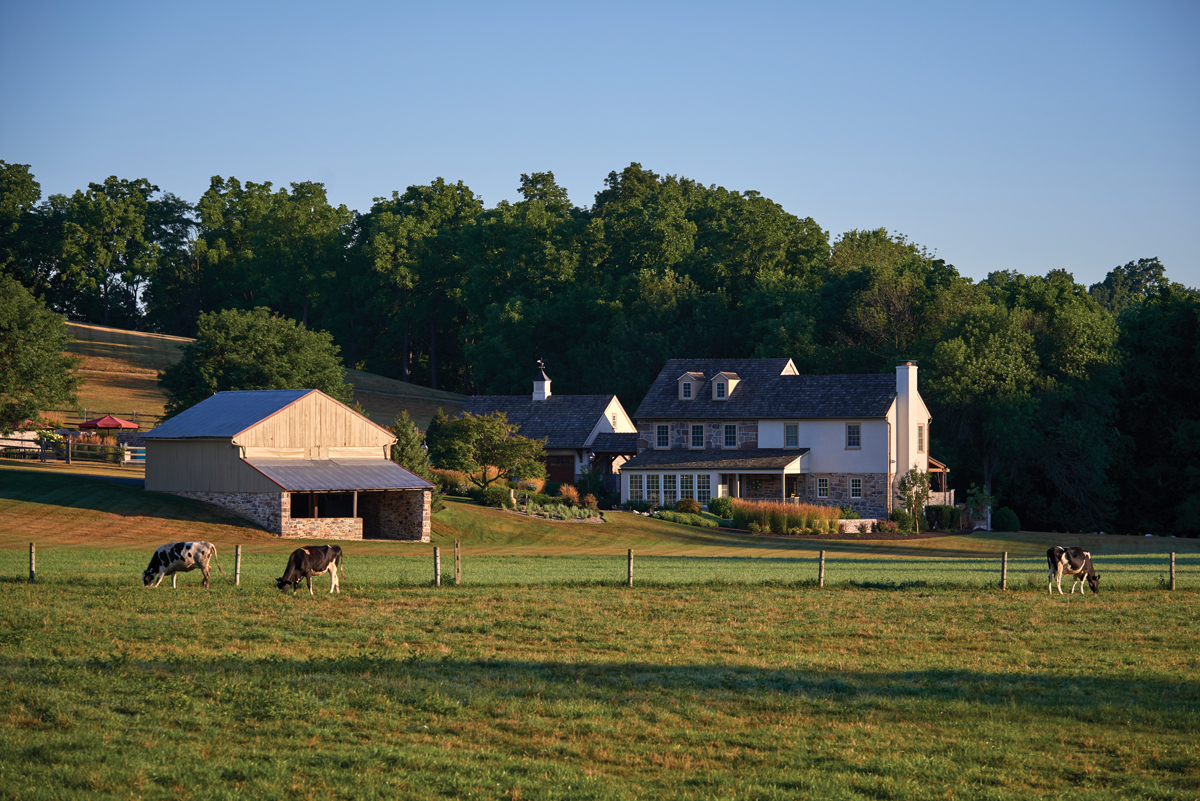 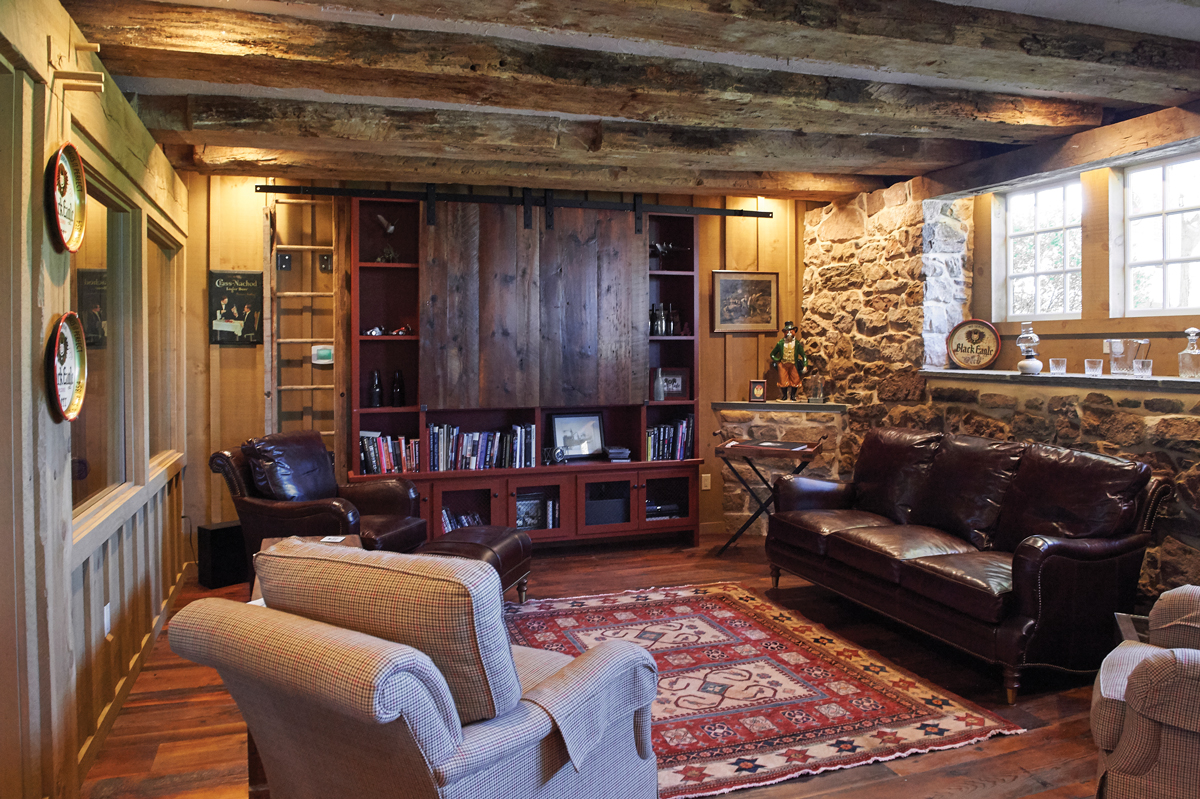 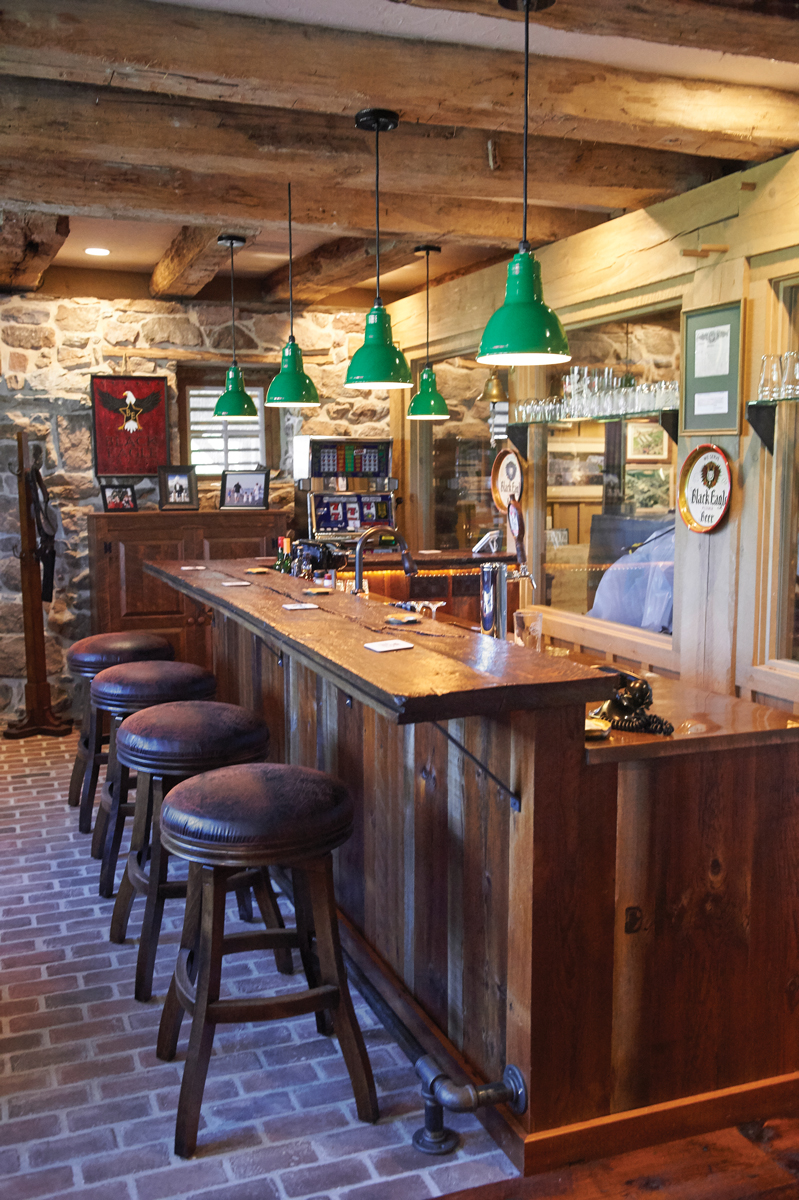 Phase 2 of the project created a spacious mudroom/laundry/powder room. Prior to the remodel, it was simply a small laundry that had a shower stall in it. Post-remodel, Kathy says it’s “so much more practical and useful.”

“This place is good for the soul,” Geoff says. “I just love the setting.”