Okay, I’ll admit it. I voted more than once. In fact, I voted multiple times a day on various devices. While there were nearly 12,000 candidates, two viable contenders emerged from the pack: Oscar the Blind Coonhound from Mobile, Alabama, and Hank the Blue Heeler from Jersey City, New Jersey.

I am referring to the annual Good Dog contest that is sponsored by one of my favorite magazines, Garden & Gun, which is based in Charleston, South Carolina. The “Gun” portion of the title refers to “the sporting life” and encompasses hunting dogs (mostly of the purebred variety), the art of decoys, the nuances of duck blinds and the joys of fly fishing or escaping to a secluded retreat for hunting quail and other birds. (It’s not my thing but the dog pictures are always spectacular.) There’s also a column in every issue – aptly named Good Dog – about a dog (often of the mutt variety) that never fails to bring tears to my eyes. As for the “Garden” portion, the gardens and homes are breathtaking. The food features are yummy. The photography is gorgeous.

This year’s Good Dog contest was special. As a Facebook member of the American Black & Tan Coonhound Rescue (ABTCR) group (I’ve had two hounds, Erika Estrada, a Spanish greyhound, and Miss Paisley, a B&T mix), I learned we had a horse – well, a dog – in the race.

Oscar the Blind Coonhound’s picture hit the G&G website just as voting got underway on September 10. Oscar’s owner, Jenn Greene, posted a photo of the fearless dog standing on a low-hanging branch of an old oak tree. Wait, a blind dog that can climb trees? Turns out Oscar can do anything he sets his mind to attempting. 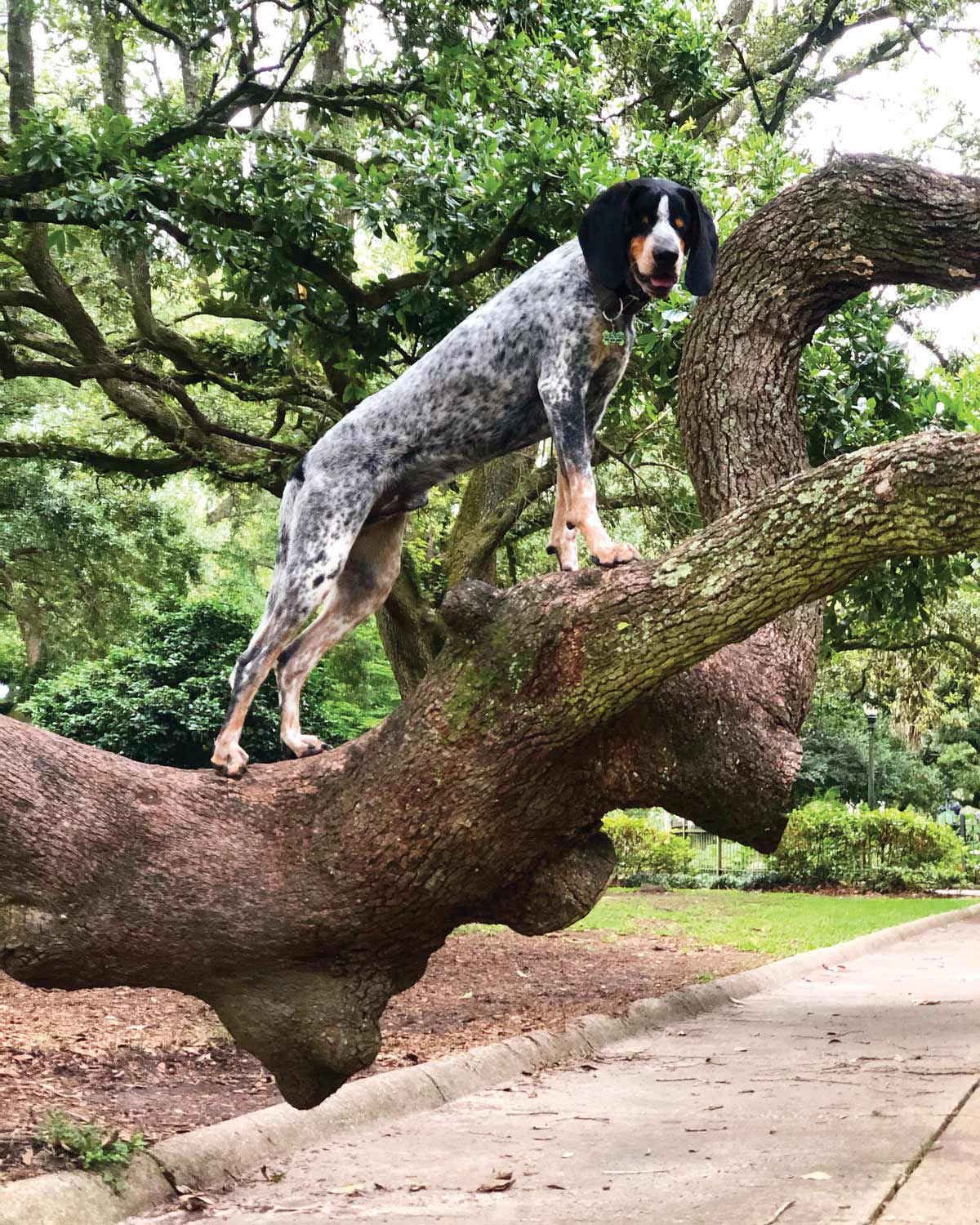 How did Jenn become Oscar’s human? Jenn moved from Boston to Mobile in 2012, becoming the city’s acting director of programs and project management. In her spare time, she co-founded the Delta Bike Project (a community bike shop) and Delta Dogs, which raises money to help low-income residents take care of their pets’ needs. Through adopting two hound mixes, she became involved with ABTCR and figures she’s fostered at least 50 dogs for them over the years.

In 2019, a rural Alabama shelter reached out to her for help with a difficult case. An 11-week-old bluetick coonhound puppy had been surrendered to the shelter. The puppy was suffering from congenital glaucoma. One of his eyes was actually split down the middle. “He must have been in terrible pain,” Jenn told the Register Citizen newspaper. “But, hounds are tough.”

Jenn took the puppy to Dr. Jennifer Wilder – the other co-founder of Delta Dogs – at Ark Animal Clinic. Once the puppy was stabilized, Dr. Wilder came up with a surgical game plan, with the goal being to save the “good” eye. Unfortunately, both of the puppy’s eyes had to be removed. That’s when Dr. Wilder called upon her cosmetic surgery skills and moved two patches of brown fur to where his eyes would have been. It appears that Oscar has eyes. In fact, when Oscar wears his special Blind Dog harness, people mistake him as a seeing-eye dog. Jenn supposes she should get something to wear that denotes her as a “seeing-eye human” when she’s out with Oscar.

Post-surgery, Jenn took the puppy home with the idea of fostering him. Of course, she became a foster-fail and added the now-named Oscar to the family.

Even before Oscar took part in the Good Dog contest, he was a celebrity around Mobile. “People are just drawn to him,” Jenn told the newspaper. A friend of Jenn’s shared that “Oscar has never met a stranger,” whether they are of the human, canine or feline variety. “He lives life with a joy that any of us would be lucky to experience. You can’t walk away from Oscar without having had your day improve.”

Jenn told G&G that she believes Oscar “sees with his heart.” He embraces life with gusto and enjoys hiking, boating, swimming and yes, climbing trees. He has mastered 25 commands and instinctively knows the constraints of the front yard. People often visit the Delta Bike Project not to get a bike but rather a hug from Oscar, the nonprofit’s “director of emotional support.”

News of Oscar’s Good Dog viral campaign spread from Mobile, through the state of Alabama, to ABTCR members and other canine groups across the country and to G&G’s social media sites. Making Oscar “Top Dog” became a nationwide mission and served as a distraction from politics and Covid. People were voting for him from their personal devices and computers on a daily basis. (You were allowed to vote every 24 hours on each device and G&G tracked it to the second.)

Oscar steadily made his climb into the Top 10 vote-getter category. By about week three, he and Hank were neck and neck for top spot. Jenn would post daily Facebook reminders that rallied people to vote. In the last few days of the contest in early October, Oscar pulled ahead for good. In the end, more than 1 million votes were cast, 45,238 of which went to Oscar and 44,054 to Hank, who did not ask for a recount.

As for Hank, who has been described as “puckish-looking,” he remains a mystery. Online searches reveal nothing about him. There’s no mention of his campaign in the Jersey newspapers. He appears to not have had the backing of a Facebook page. Still, he garnered an incredible number of votes. Who knows, maybe he thought he was so darn cute that he didn’t have to campaign and snoozed September and early October away on the living room sofa. Oscar and Jenn were gracious in their victory and commended Hank on his runner-up showing. As of early December, there was still no word of congratulations from Hank and his people. 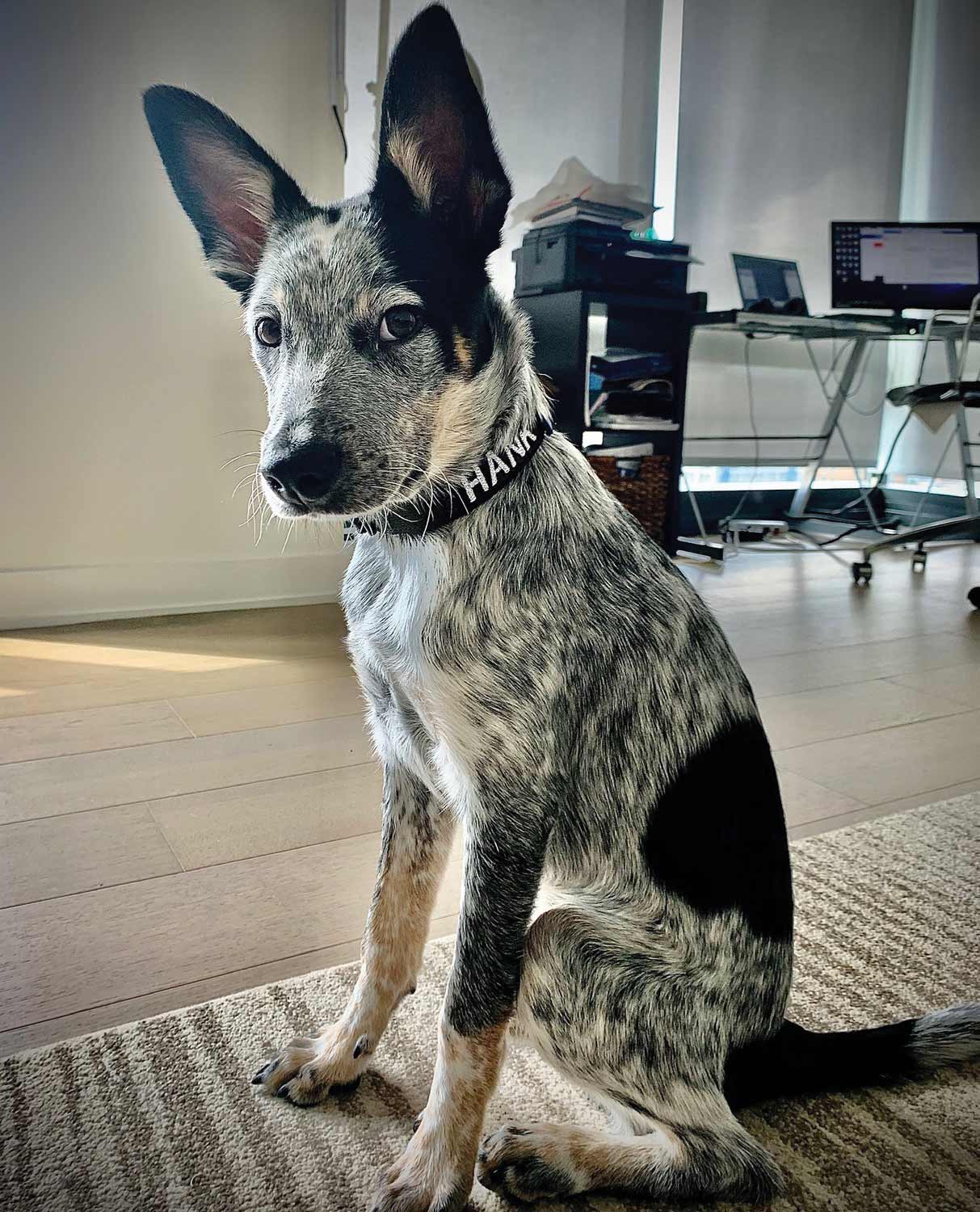 Oscar’s victory was celebrated Mardi Gras-style (with social distancing, masks and beads, of course) in Mobile. Oscar was a guest of honor at a city council meeting. He became a media sensation. Gift baskets filled with treats and toys arrived at his door. His favorite restaurant, Callaghan’s Irish Social Club, treated him to a special burger when G&G officially certified him the winner of the Top Dog Reader’s Choice category.

Wait! You mean he didn’t win the whole kibble and caboodle?

It seems G&G reserves the right to choose the Overall winner, which is always a breed that is more in line with the magazine’s “sporting life” target audience. That honor went to Dylian, a Chesapeake Bay Retriever from Texas, whose vote total was only in the three-figure range (but, hey, he sure is cute). With that said, I doubt whether you’ll ever see a coonhound, a poodle or a mutt on the cover of G&G. But, that’s okay … coonie nation is being represented by good ol’ Blake Shelton, whose beloved and devoted hound, Betty (he got custody of her in his divorce from Miranda Lambert), often appears in his music videos and on occasion, accompanies him to episodes of The Voice. Who knows? Maybe Betty will take part in Blake’s wedding to his new lady love, Gwen Stefani.

Jenn is thrilled with Oscar’s showing and views it as coming with a silver lining, as it helped to put the spotlight on pets that are physically challenged. Oscar’s notoriety has provided her with the “opportunity to talk with people about dogs who are different.”

Meet all the winners of the 2020 Good Dog Photo Contest here.