Whether they are competing, teaching, continuing their educations, coaching or vacationing, water is – and has always been – a part of these brothers’ lives. 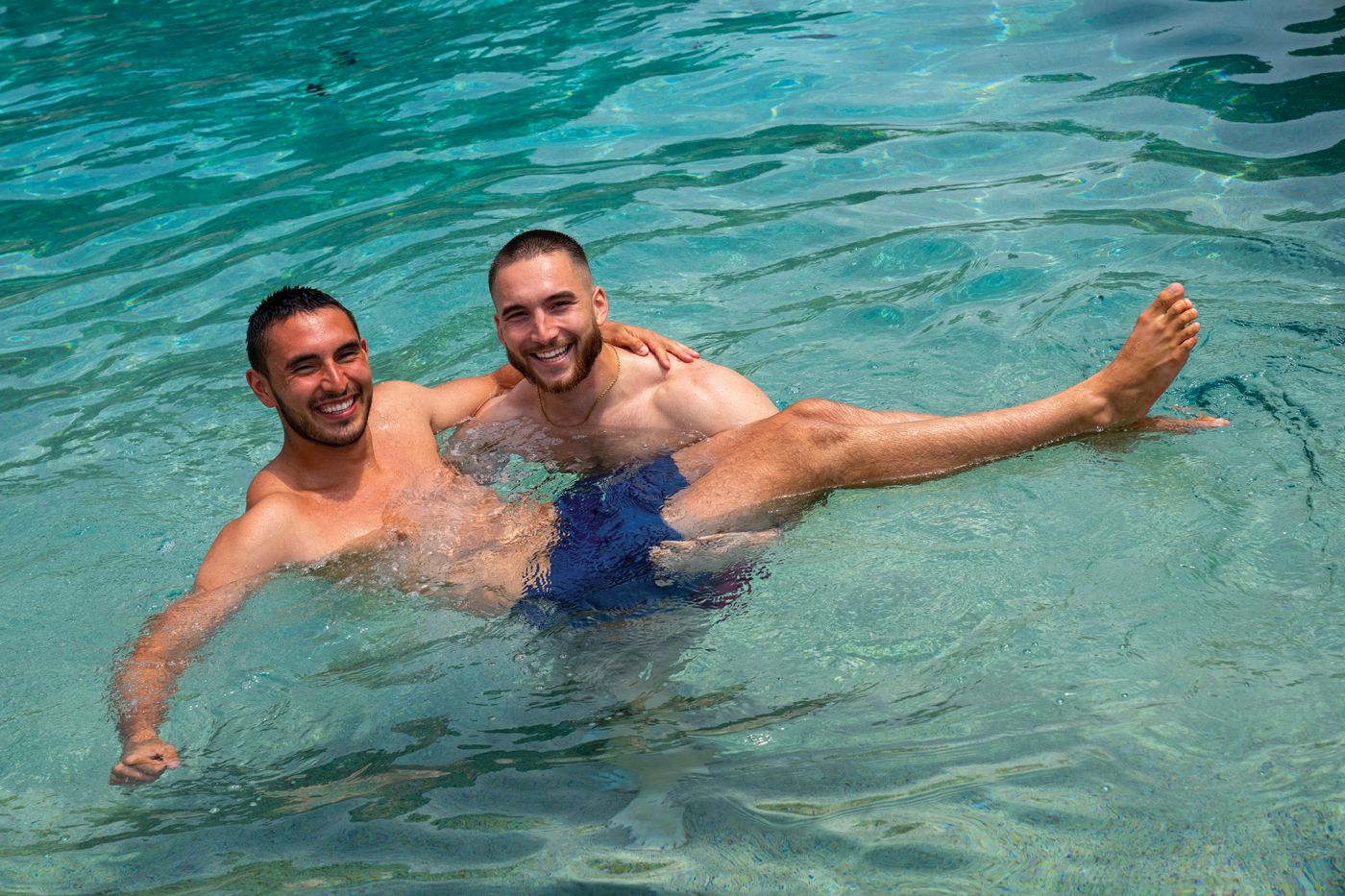 Andre (left) and Tre Fissella have been swimming since they were toddlers. Now they are involved in swimming from a teaching and coaching perspective. Both will graduate from college next spring.

You never know what you’ll come across on the social media site, Nextdoor.com. One that recently stood out was an announcement posted by Bonnie Fissella relaying that her sons, Tre and Andre, would be teaching private swimming lessons in the family pool again this summer. Tre launched the service about four summers ago as a result of young swimmers asking him for help with their stroke mechanics. The next thing he knew, Tre had parents asking him to provide lessons to children who needed to learn the basics. “Then, someone asked me to take on their 18 month old,” he recalls.

Andre, who is a first-time coach this summer – Manheim Swim Team, which is a Summer League Division 3 team with 65 members – is also joining his brother in providing swimming lessons. “I was asked a million times to get into coaching,” he explains. “I finally said yes.” Working with the youngest swim-team members prompted Andre to become interested in helping Tre with lessons.

Tre works with Lilly Walters on the beginning elements of freestyle.

The two agree that learning to swim is vital. “Absolutely, 100% – it’s crucial that kids learn to swim,” Tre says. “One day you could find yourself in a situation where your life is on the line because you can’t swim.” He adds that being able to swim affects other aspects of your life – from hanging at the pool with friends as a kid to thoroughly enjoying a beach vacation as an adult.

Andre points out that lessons are not a once-and-done endeavor but rather “a learning process – swimming is very technical,” he says. “Few kids can grasp it right away.” As for working with competitive swimmers, the two focus on helping them to break bad habits. As a result, the lessons have evolved from helping students who, according to Andre, have “nothing in the way of skills to competitive swimmers who are seeking help with the technical aspects” of the sport. 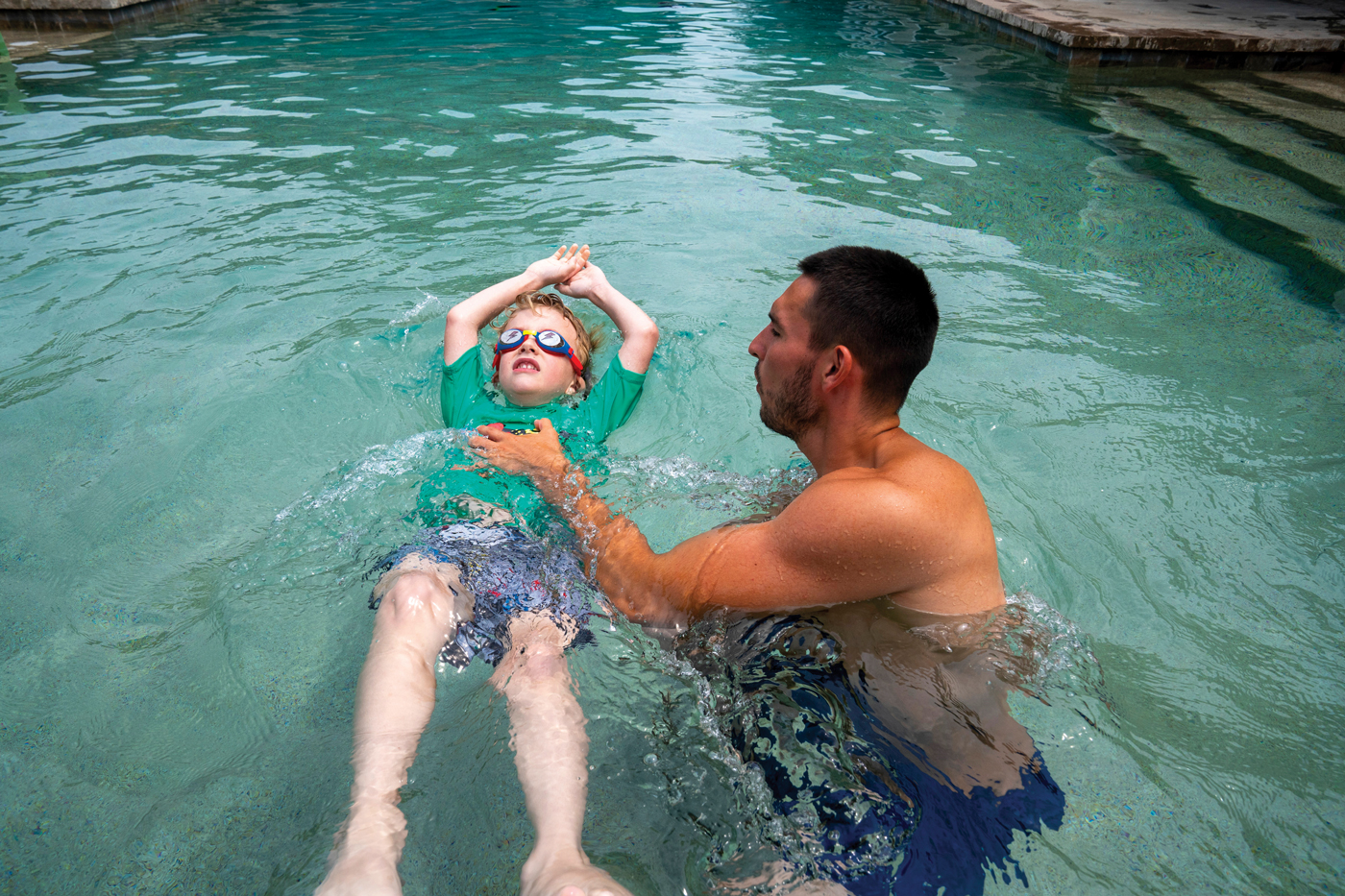 Andre works with Lucas to learn the fundamentals of backstroke.

The two maintain that private lessons are especially beneficial for younger kids, as they can provide them with one-on-one attention. Developing personal relationships with first-time students often provides them with the courage to overcome things like getting their faces wet or going underwater. While kids won’t do such things for a parent, they’ll attempt them for Tre or Andre.

Such is the case with Lilly and Lucas Walters, who arrived at the Fissella pool with different issues to overcome. “Why do you like coming here?” I asked Lilly, who had been fearful of going underwater. “Because of Tre,” she answered. While Lucas is a pro on floating on his back and is beginning to master the mechanics of backstroke, he does not like to get his face wet. “We’re working on that,” says Tre. The brothers add that private lessons help kids to focus, as they are not being distracted by other kids or other activities taking place in the pool. 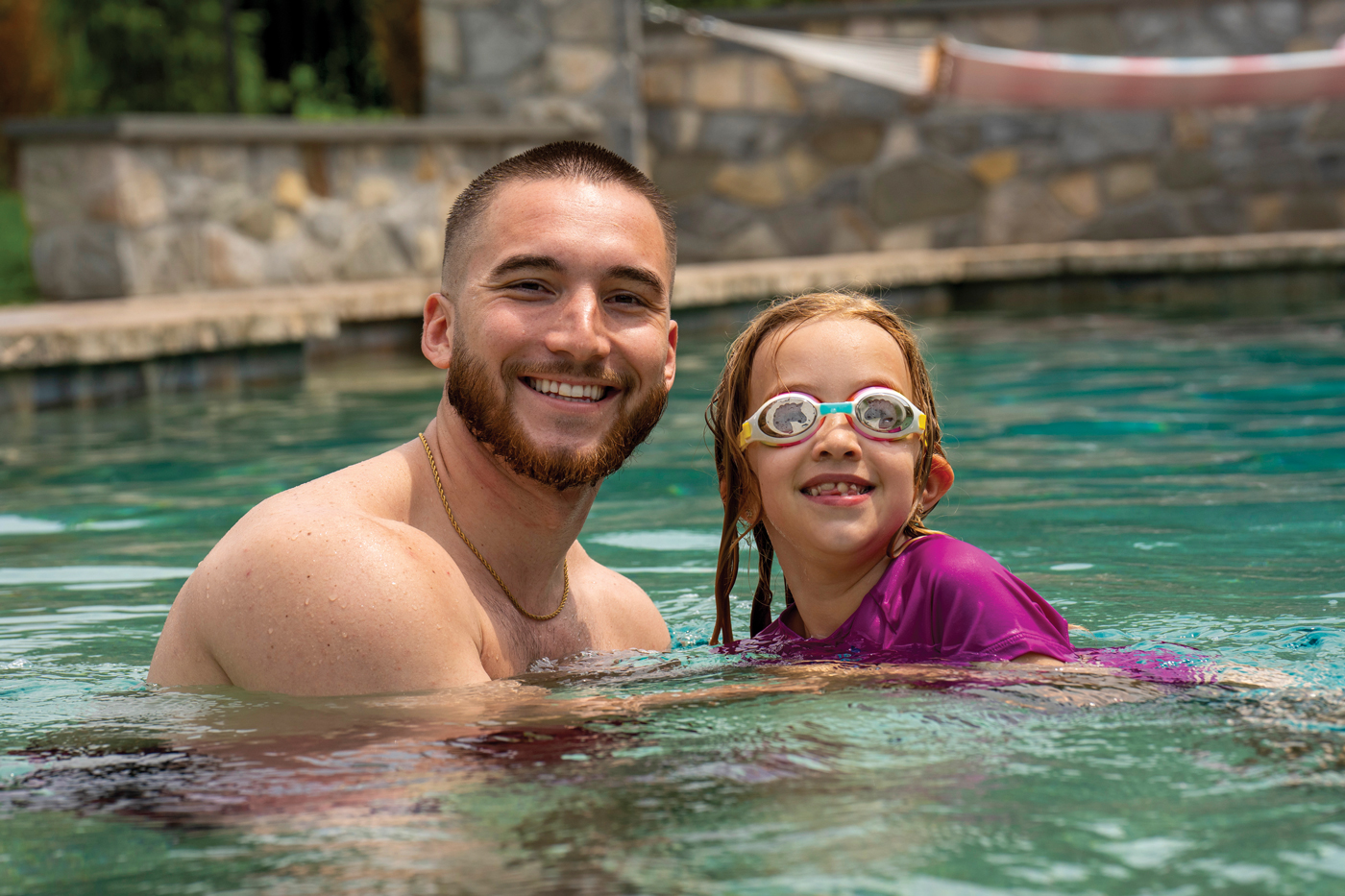 Lilly says Tre is the reason she enjoys her lessons.

It seems the brothers are the exception rather than the rule where taking to the water like a fish early in life is concerned. “Our mom was a swimmer,” says Tre. Their father, Victor, was also an athlete. The boys grew up around water. Their previous home had a backyard pool and one was installed almost immediately after they moved to the home they have lived in since they were in middle school. Tre remembers being a toddler – “I was still in diapers,” he notes – when his father introduced him to the deep end of the pool. “We have old movies of Dad throwing him into the deep end,” says Andre. “He loved it.”

The two participated in the Swim America program at the Hempfield recCenter and each joined the summer swim team at Golden Meadows by the age of 6. They also began competing year-round by joining the Lancaster Aquatic Club. Both also swam competitively for Hempfield High School, each earning trips to the PIAA state championship meets. Tre, who earned three All-American awards during his high school career, will be inducted into the Hempfield Sports Hall of Fame this fall. 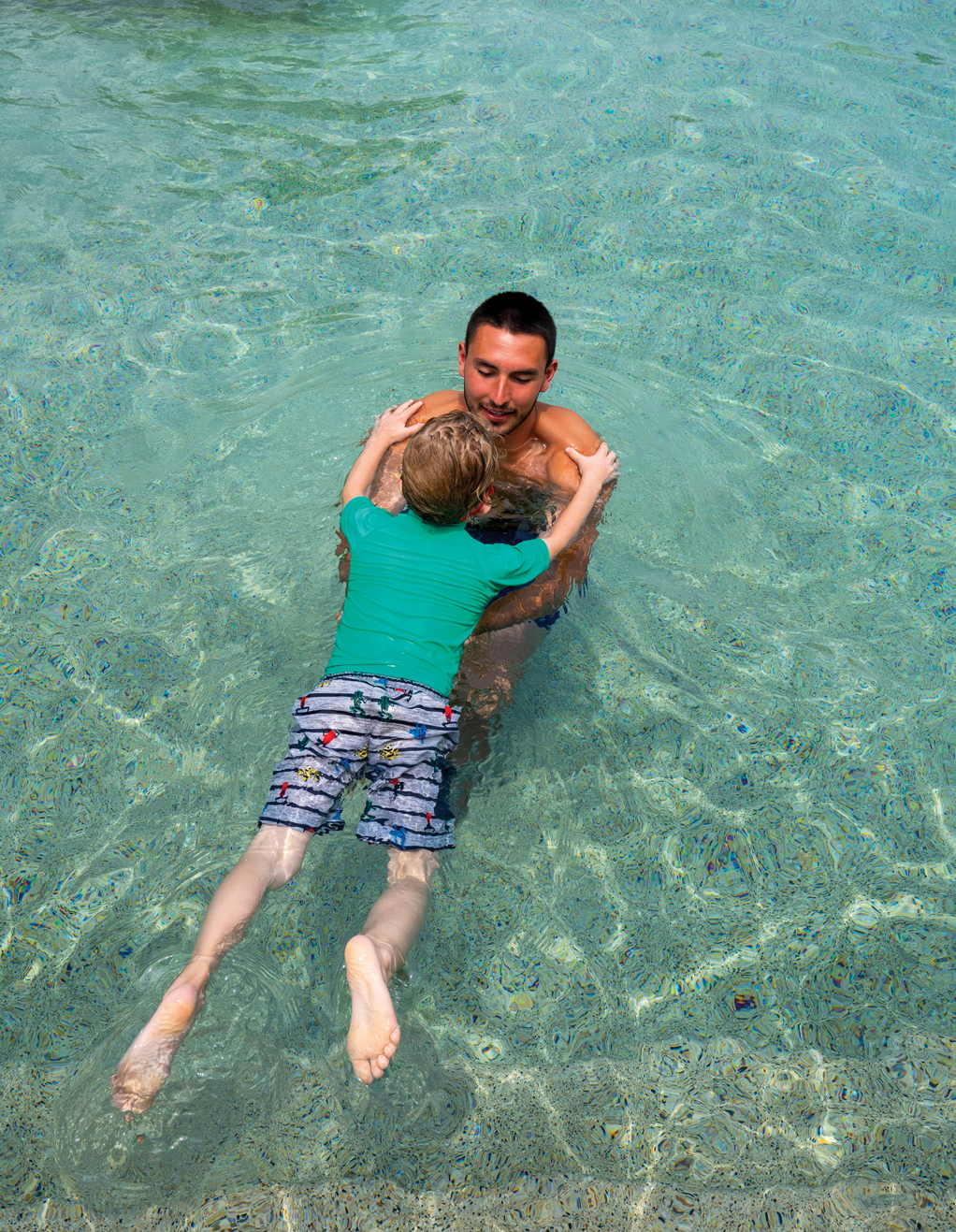 Andre takes Lucas through the paces that will help him to become more confident in the water.

When they weren’t training or competing, the brothers were lifeguards at Lancaster Country Club (Andre also guarded at Landisville Pool). They agree that lifeguarding gave them insight into identifying kids who fear water or struggle to find their comfort zones. “The giveaway was kids who always stayed by the steps or would venture away from the wall a little and make a beeline back to it,” says Andre.

Tre and Andre continued swimming in college. Tre, who took a two-year break after high school, will be a senior at Cabrini University in Wayne. He swam his freshman year but decided to forgo swimming after that in order to focus on his studies. A public health major, he is toying with the possibility of becoming involved with his mother’s business, The Finished Line, Disappearing Ink. Tre became interested in the procedure through which tattoos are removed and is now certified. “I love doing that!” he says. “I’m good at doing it.” 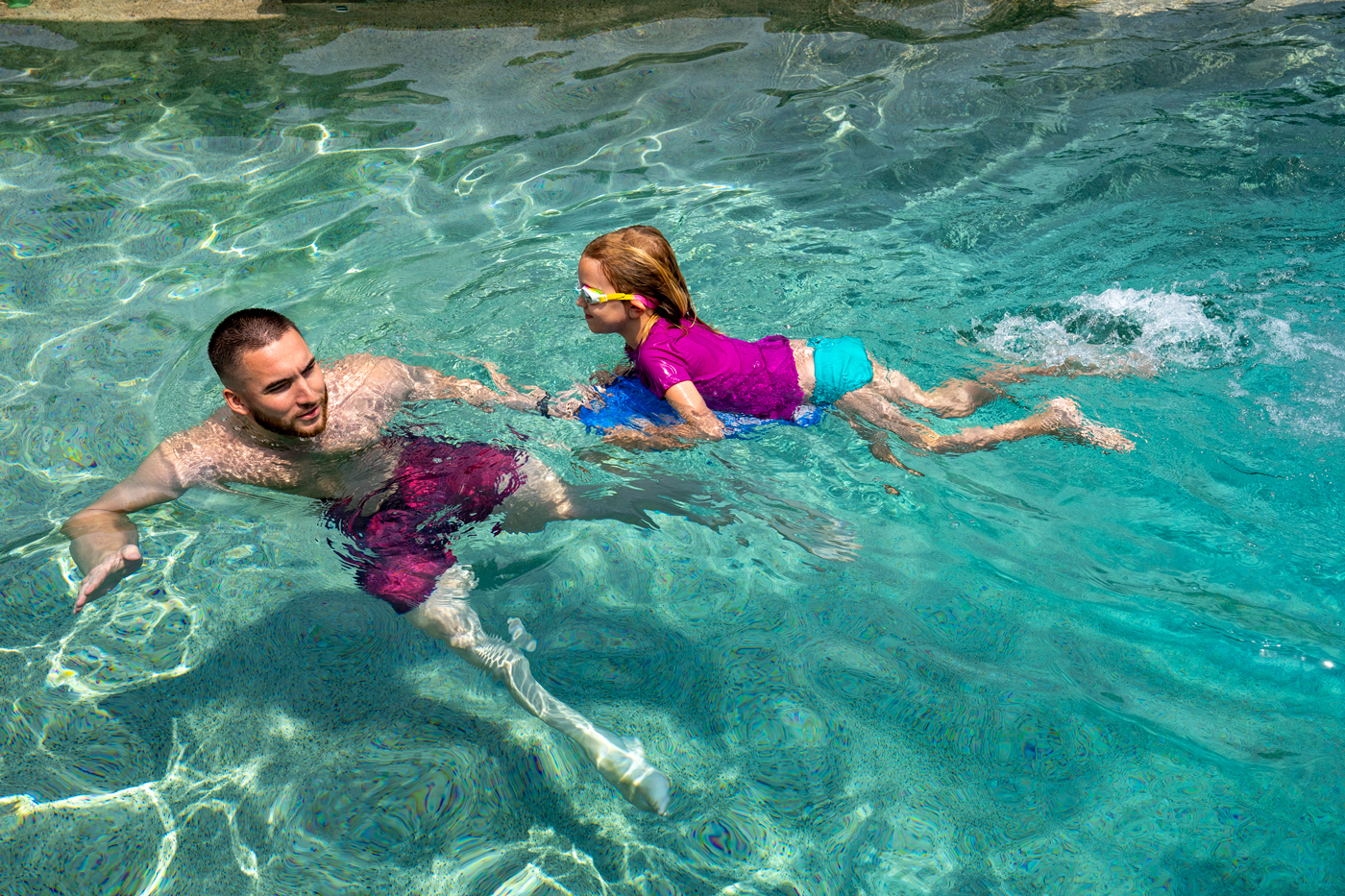 Andre, who will be a senior at Susquehanna University, will swim one more year. A psychology major, he plans to pursue a master’s degree in sports psychology. Presently, he is weighing his options and is looking at programs offered by such schools as Florida State, Michigan State and Oregon State, among others. “It’s relatively new here,” he explains, noting that European universities are ahead of the curve. “Who knows, I might end up in Europe,” he adds.

One thing they are certain of is that swimming will somehow continue to play a role in their lives, even if it is just from an exercise standpoint. “It always manages to drag you back in one way or another,” Tre says. 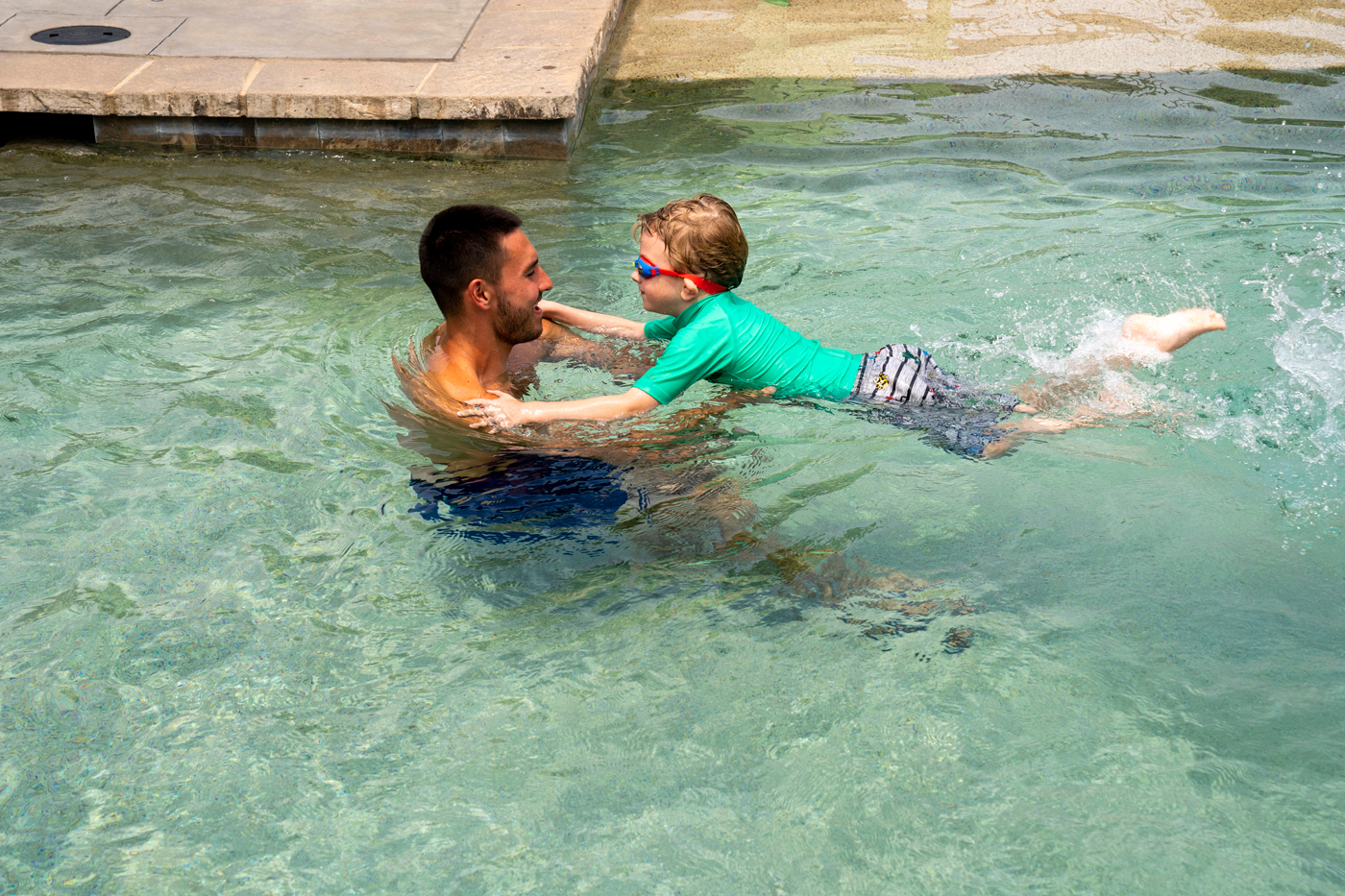 Andre (left) and Tre Fissella have been swimming since they were toddlers. Now they are involved in swimming from a teaching and coaching perspective. Both will graduate from college next spring.