Summer arrives this month, which means it’s time for clam bakes, crab picking and shrimp on the barbie. Or maybe you have a hankering for a crabcake. Either way, Mr. Bill’s Fresh Seafood and The Fat Crab Café can satisfy your cravings for seafood. 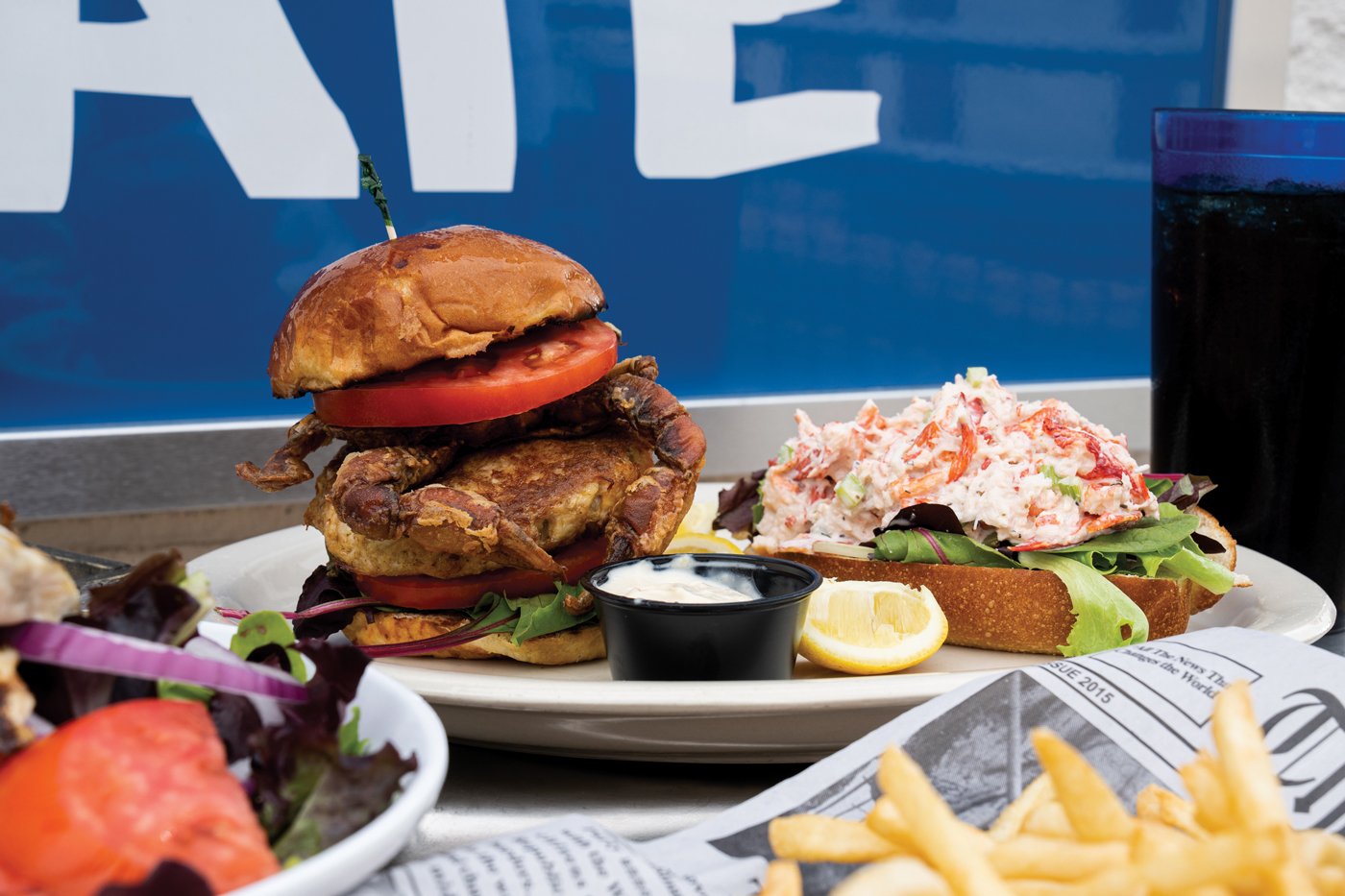 The Fat Crab Sandwich features a crabcake and a soft-shell crab. Lobster Roll is another specialty of the house.

Mr. Bill’s was founded in 1973 by Bill Towson and Don Myers as Mr. Bill’s Crab Pot, a seasonal purveyor of live and steamed blue crabs, shrimp and clams. Current owner, Tim Glatfelter, who began working at Mr. Bill’s in 1976 as a high school student and continued through college, was given the opportunity to become an owner in 1981. “When Mr. Bill’s started, it was all about fresh crabs,” Tim explains. “Even now, crabs are about a third of our business – they’re one of the more popular items of summer and most of it is take-out, but we do get people who purchase crabs and crack them here at the café.” Crabs are such an integral part of the business, that Mr. Bill’s developed a steaming device in 1998 that allows for more than 200 bushels of the crustaceans to be prepared on a daily basis. 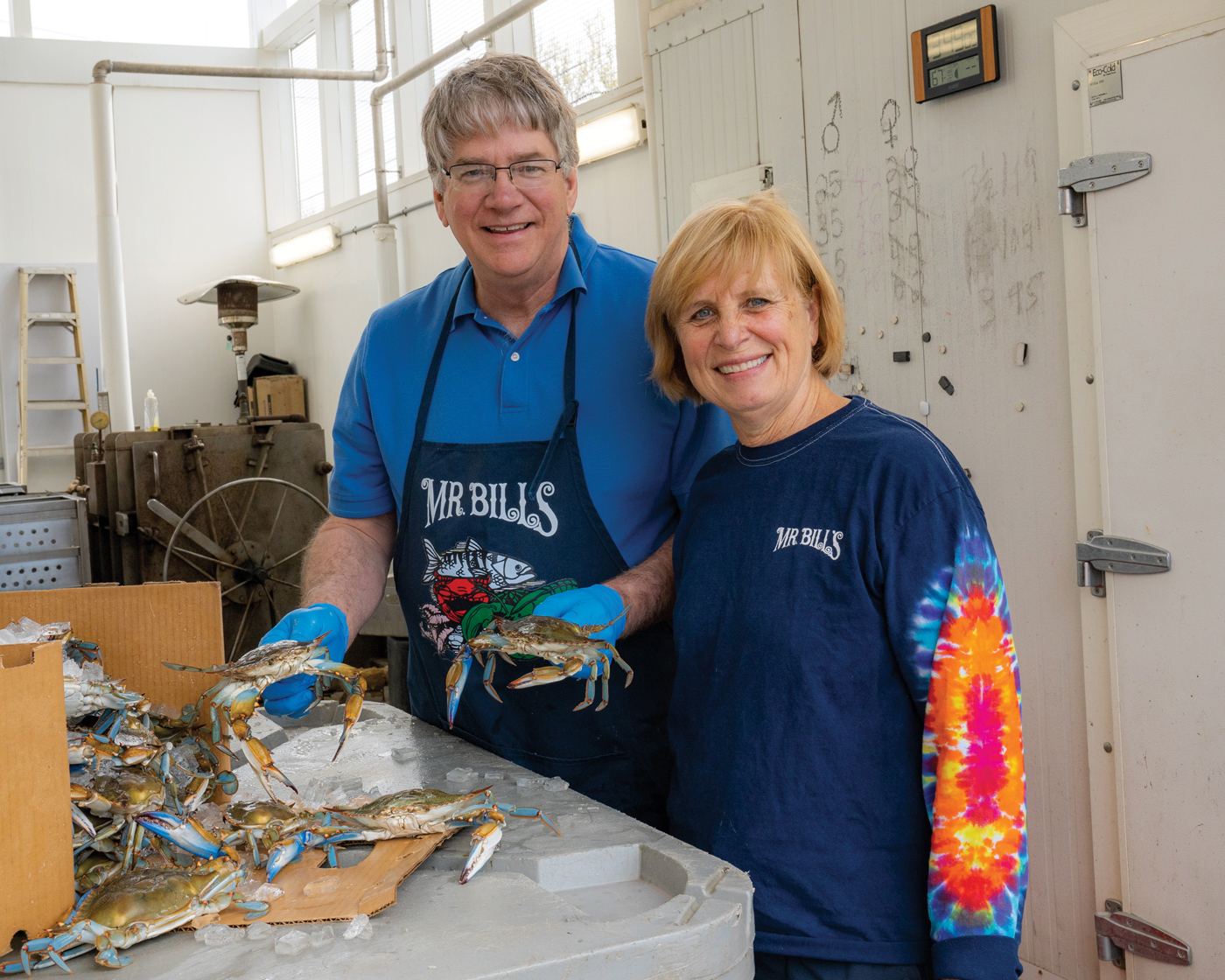 Interestingly, Mr. Bill’s was originally located where it now makes its home. A move across Harrisburg Avenue to a larger space allowed Mr. Bill’s to expand its seafood offerings to also include fresh fish, lobster, mussels and oysters. Tim notes that shrimp is sourced primarily from Ecuador, Mexico and Central America. “The texture, flavor and sweetness are like none other. We peel and devein them onsite,” he adds. Oysters and other seafood are purchased from sources up and down the East Coast. Blue crabs are obtained from the Chesapeake Bay, Louisiana and the Carolinas. King crab is caught fresh in the Bering Sea, while snow crab comes from the West Coast or North Atlantic Ocean. “Our focus is on high-quality product. We’re always getting short-trip or day-boat fish – it’s fresh and more flavorful,” Tim reports. “We carry a lot of wild-caught fish, but we also offer farm-raised and organic fish.”

In addition to the Harrisburg Avenue location, Mr. Bill’s has operated a stand at Lancaster Central Market (Tuesday, Friday and Saturday, 7 a.m.-3 p.m.) since 2011. 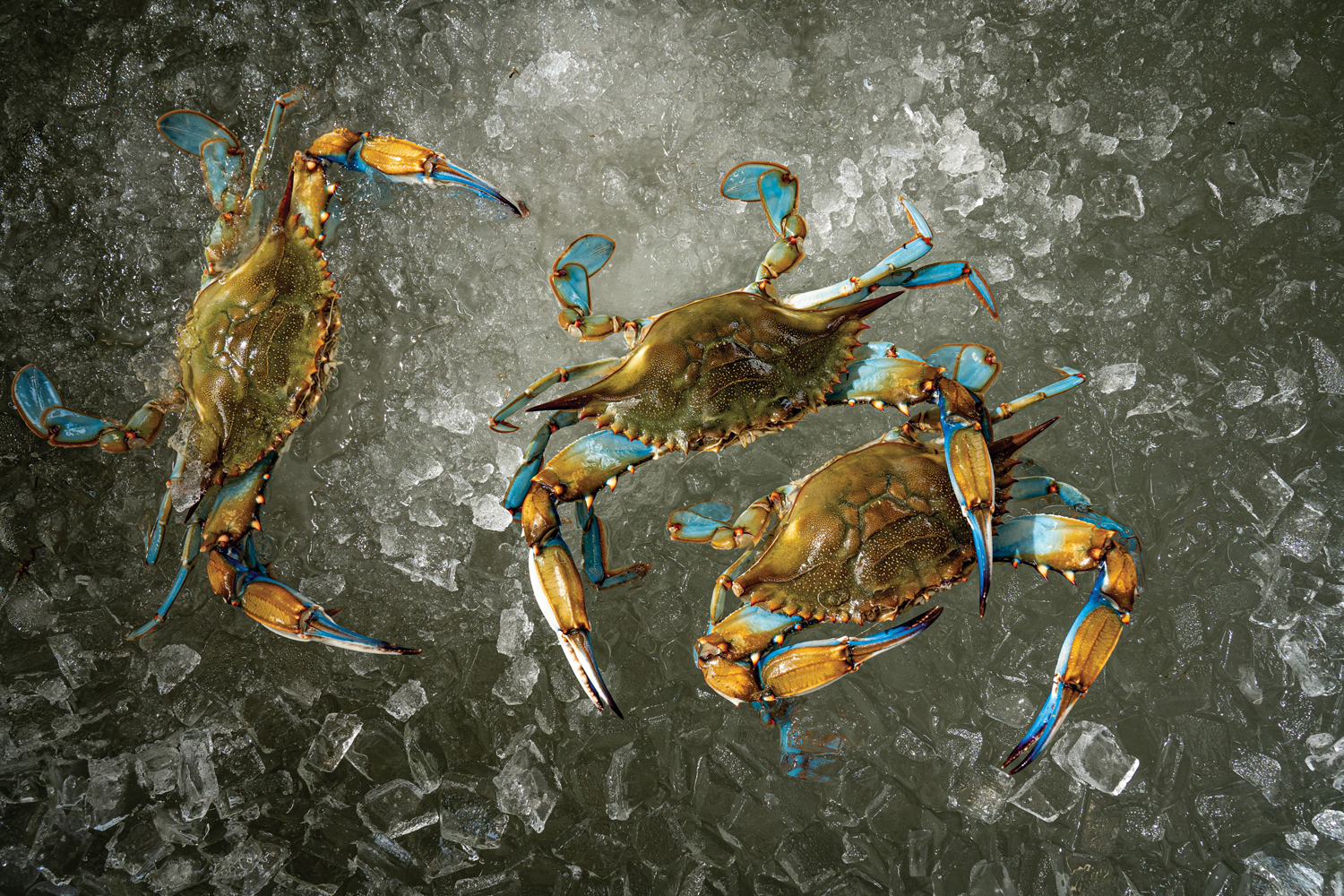 Despite the large selection of fish and seafood, blue crabs, which are sourced from the waters of the Chesapeake Bay, the Carolinas and Louisiana, remain a summertime favorite with customers of Mr. Bill’s.

Mr. Bill’s moved to its current (and original) location in 2017. Renovations to the building included the addition of The Fat Crab Café. “People were asking for ready-to-eat food, so we decided to add a café,” Tim says. When thinking about a name for the café, Fat Crab was a logical choice. “Everyone likes a fat crab – it’s full of meat and it’s sweet,” Tim notes.

The café seats about 28 inside, where tables and chairs deliver a sleek, modern look. Seasonal outdoor seating is available on a patio, where brightly colored umbrellas and plant-filled containers add a summer feel to the space. 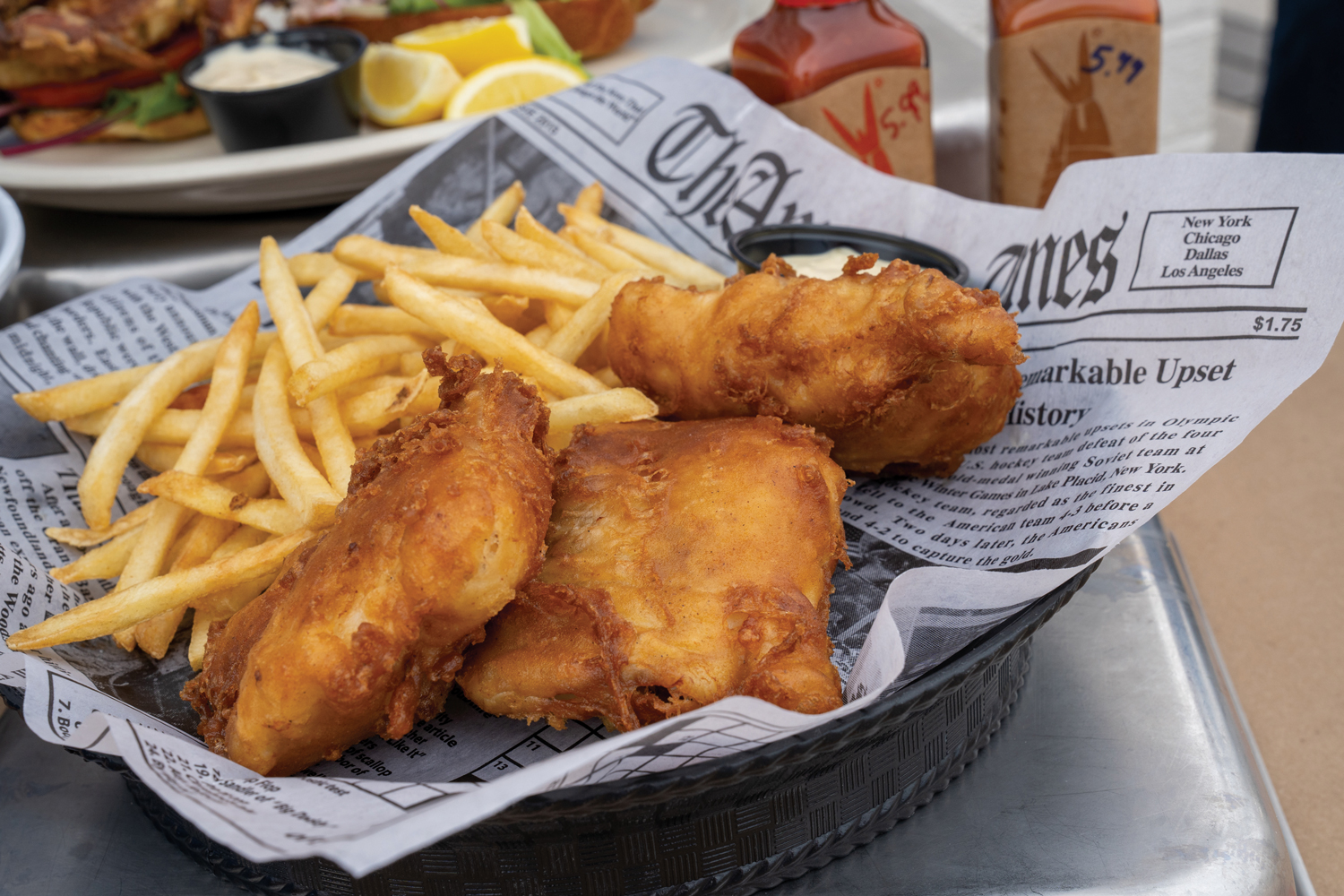 Fish and Chips is comprised of Boston blue (pollock) that is deep-fried and accompanied by crispy French fries.

“What makes our product and café items so great is that 95% of the fish is cut here. We also purchase produce at Central Market,” Tim says of the menu’s fresh factor.

The menu is overseen by chef Mark Wolownik. Soups are made fresh daily and shift seasonally to take advantage of local ingredients such as asparagus and sweet corn. Clam chowder, baked tomato crab bisque, Chesapeake crab and asparagus, crab and corn chowder and almost famous clam chowder (a New England-style chowder) are among the soups that appear on the menu. 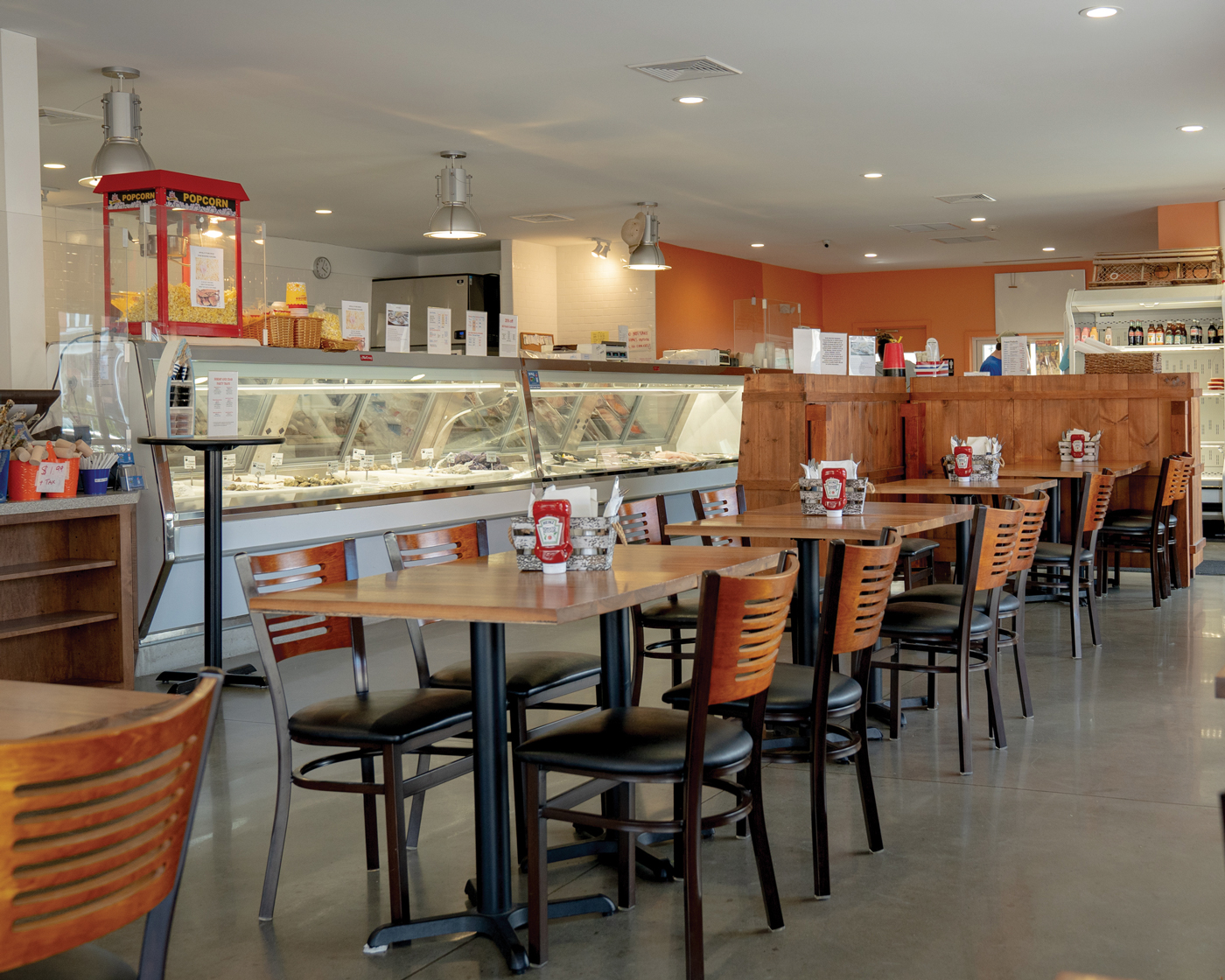 The Fat Crab Café was inspired by customer requests for ready-to-eat food.

Despite the large selection of fish and seafood, blue crabs, which are sourced from the waters of the Chesapeake Bay, the Carolinas and Louisiana, remain a summertime favorite with customers of Mr. Bill’s.