Enough with doom and gloom! Let’s discuss a widely growing native hardwood tree that has not been threatened by any pests or diseases. I’m referring to the tulip poplar, Liriodendron tulipifera. Furthermore, it is a primary host for the larval stage of the eastern swallowtail butterfly, Papilio glaucus. 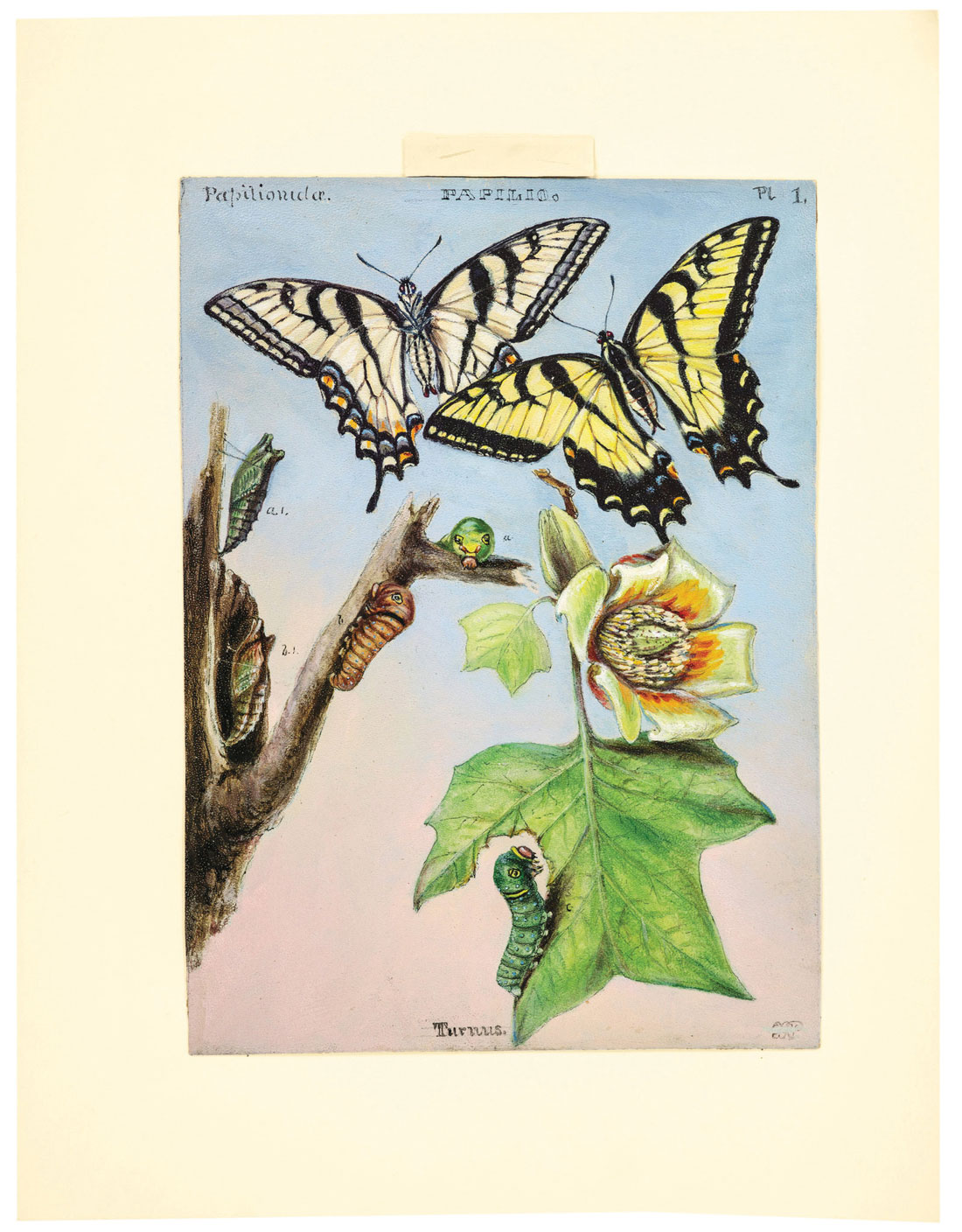 Illustration by Titian Peale, courtesy of The American Museum of Natural History. “The Eastern Tiger Swallowtail, Papilio glaucus, with mature caterpillars and chysalides on one of the host plants, tuliptree (Liriodendron tulipifera). The species occurs throughout eastern North America where the caterpillar feeds on trees and bushes in the magnolia, rose, and other families,” according to The Butterflies of North America: Titian Peale’s Lost Manuscript.

While it has many additional folk names – yellow poplar, tulip tree, fiddletree and whitewood –  the tulip poplar is not a true poplar at all! The tree is, surprisingly, in the magnolia family. One could call it the king of the magnolia family. It is found throughout eastern North America, from Ontario to central Florida. It’s the state tree of Indiana, Kentucky and Tennessee.

The tulip poplar is one of our largest eastern trees with a usual height of 70-140 feet. Typically, the taller specimens have no limbs below 75 feet, which makes it a very valuable timber tree. It prefers deep, rich, rather-moist soil but will not tolerate flooding. Although it grows fast, it is not weak-wooded or short-lived like many fast-growing species. 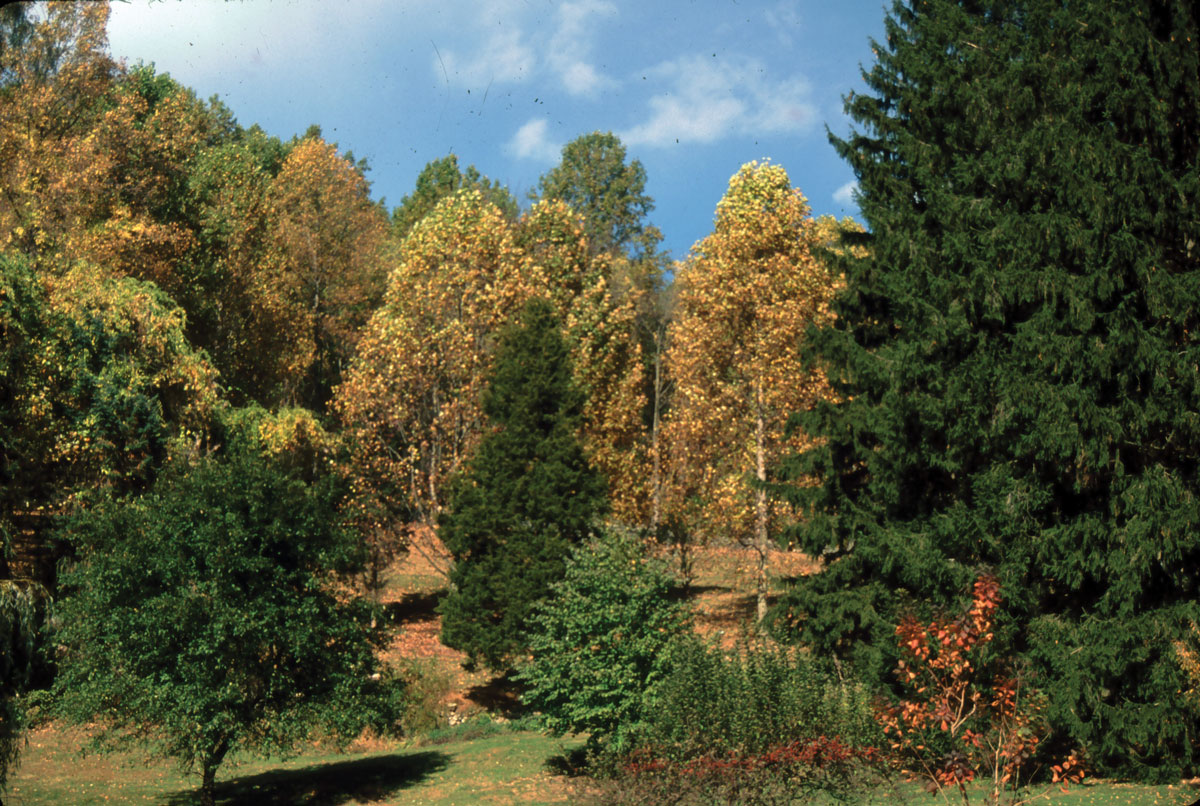 Tulip poplars bring a golden hue to woodlands in autumn.

The alternately arranged bright-green leaves are 5-6 inches long and wide. They have four lobes, with the upper part of the leaf square looking like the tip was cut off. In silhouette, it has a tulip shape. The leaves have long slender stems (petioles) and are constantly turning and rustling with the slightest breeze, which reminded someone of the true poplar tree (Populus tremuloides – quaking aspen), hence the common name.

The erect flowers appear on the tips of the twigs during May and into June. They are pale greenish-yellow with orange bands at the base, the overall appearance resembling a tulip. Unfortunately, the flowers often go unnoticed on large trees because they appear after the leaves are fully developed. The flowers provide large quantities of nectar. In autumn, the leaves turn a clear, bright yellow.

The tree’s straight-grained wood is light yellow, while the sapwood is a creamy white or pale green. 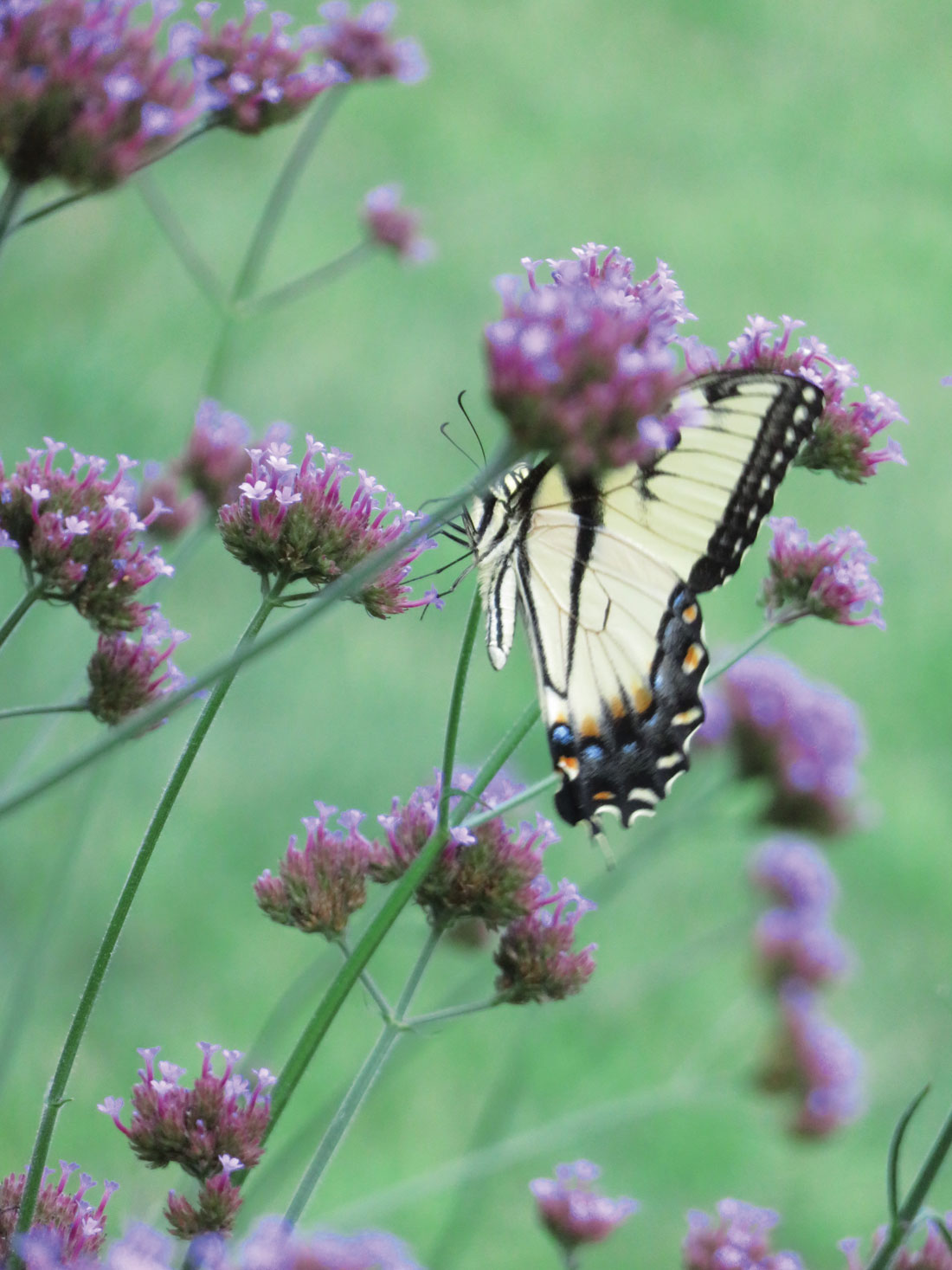 Liriodendron tulipifera produces a large amount of seed that is dispersed by wind. The seeds typically travel a distance equal to 4-5 times the height of the tree and remain viable for 4-7 years. The seeds grow readily if they land or are sown in well-drained loam in a shady site that doesn’t dry out. One source claims that the seeds most likely to germinate are from the top branches of older trees. They are easily transplanted in the spring before leaf-out, provided the fleshy roots are handled gently.

In the winter landscape the tree can easily be identified by the distinctive large terminal buds with two large duck-bill-shaped scales.

Grown independently and in full sun, the trees will tend to be shorter and rounder and more suitable to planting in the home landscape. Indeed, it is highly recommended as a shade tree. It is often planted for reforestation because of its rapid growth and the value of its wood. It was introduced into Great Britain by 1688 and continues to be a well-liked tree there in parks and large gardens.

Locally, the invasive grape vines and bittersweet are extremely damaging both by blocking light and by increasing weight on limbs, which causes bending and breaking. 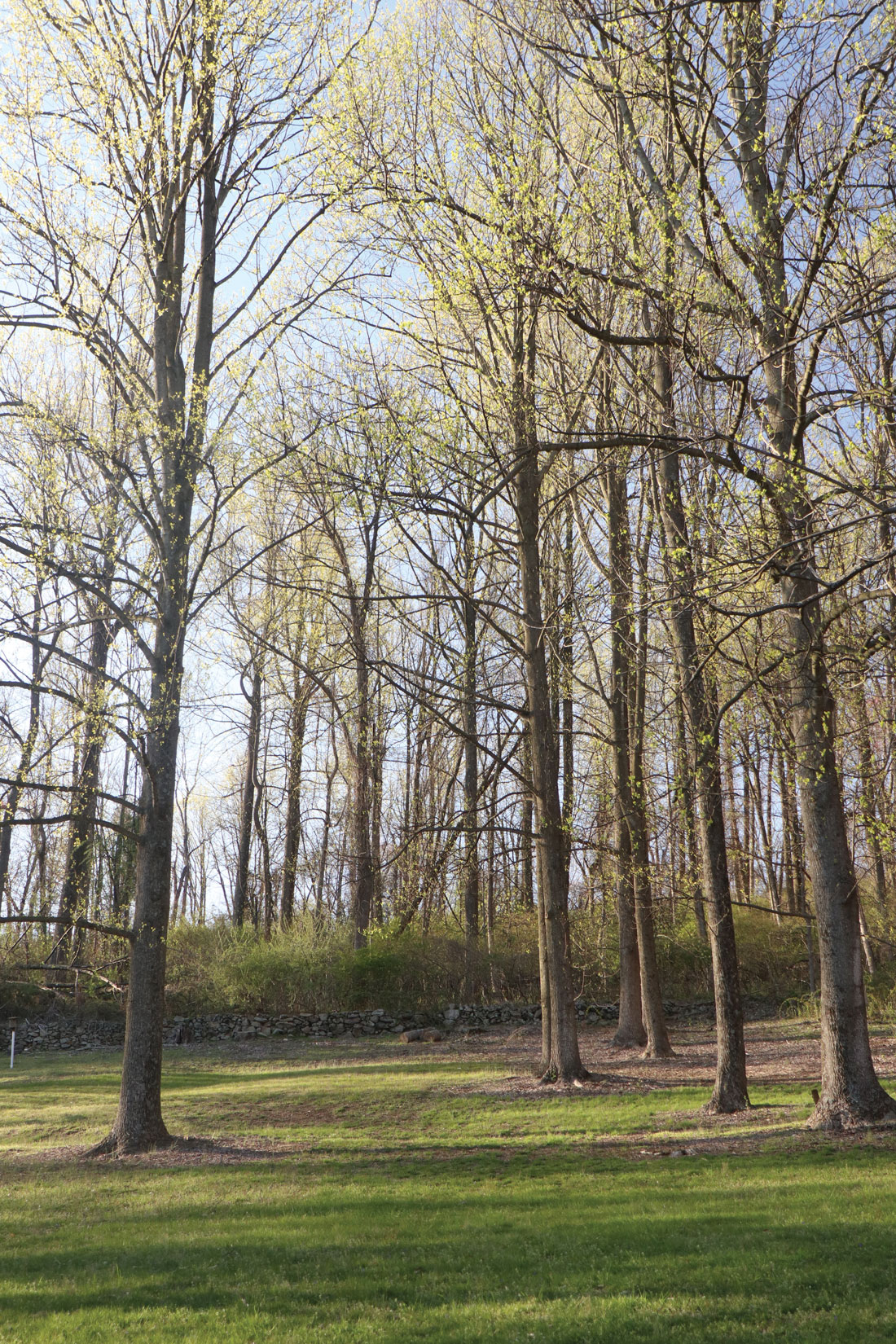 Native Americans made their dugout canoes of the light and easily-worked wood; early settlers often called it canoewood. It is reported that Daniel Boone made a 60-foot-long canoe from the wood and sailed from Kentucky down the Ohio River with his family and supplies. Hand-dug wells were traditionally lined with the wood since it didn’t affect the taste of the water.

Nowadays, the easily worked wood is used for furniture, interior finishing, boatbuilding,  plywood and general lumber. One often finds musical instruments (notably organs), toys and various small articles made of tulip poplar. Because it has a reputation for being resistant to termites, house and barn sills were often made of tulip-poplar beams. It has been a favorite choice for wood carving by sculptors.

Unfortunately, furniture made of poplar is often stained and passed off as more expensive walnut. The giveaway is a greenish under-cast rather than the rich golden-chocolate glow of black walnut. 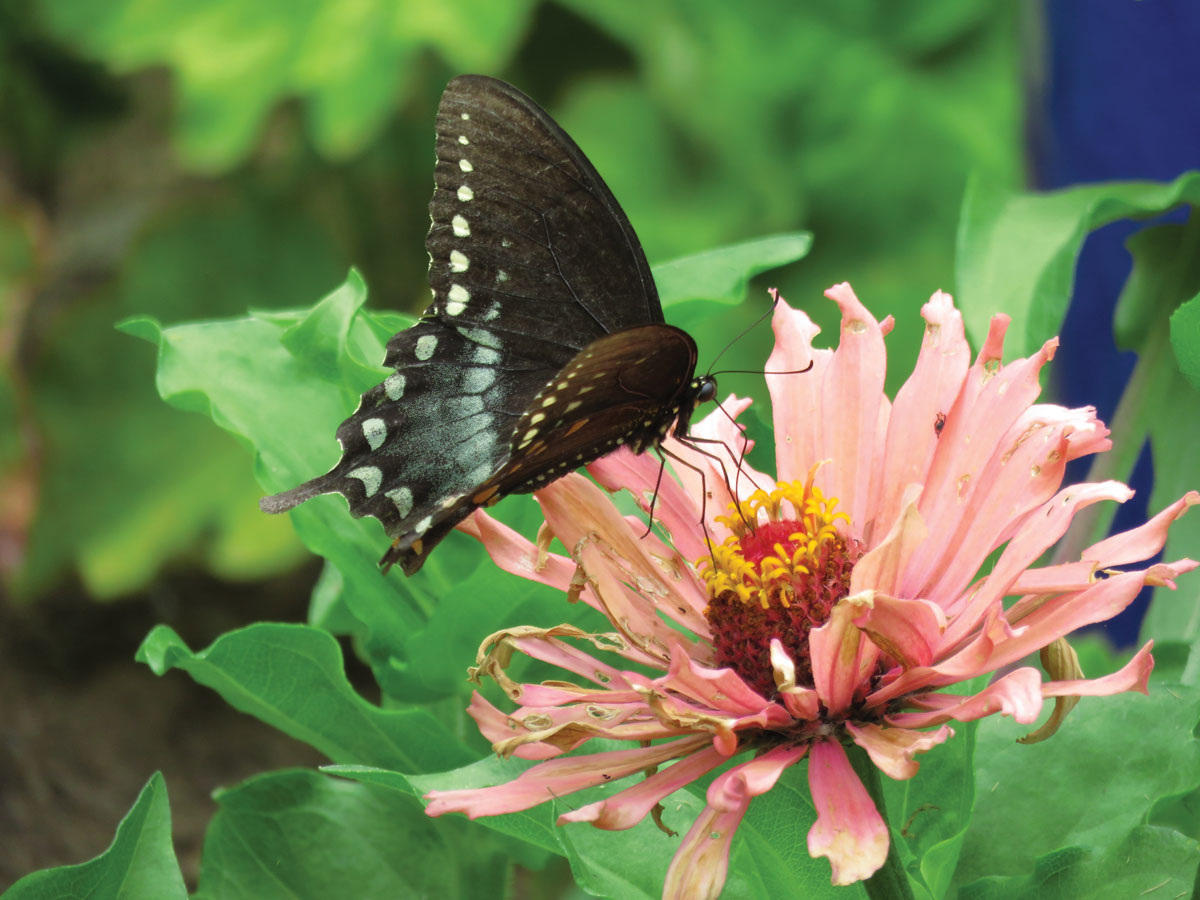 Tulip poplar is a favorite nesting tree for birds; the nectar-rich flowers attract hummingbirds. It is host to several dozen species of moths but is best known as the food source for the eggs of the eastern tiger swallowtail butterfly (Papilio glaucus), one of the most common and beautiful butterflies seen in county gardens. They are unmistakable with their vibrant and large outspread yellow wings (2-1/2 to 4-1/2 inches) edged in black with four stripes tapering downward. The bottom edges have iridescent blue scales and often red-orange spots. The males are often darker and lack the blue and red scales. One often sees a group of swallowtails together in muddy spots drinking water that contains sodium and amino acids, which are said to add to their longevity.

Adult swallowtails seek nectar from a wide variety of garden plants, but they lay their large green eggs exclusively on plants in the magnolia and rose families. The most familiar native host plants locally would include, along with the tulip tree, the wild black cherry (Prunus serotina) and sweet bay magnolia (Magnolia virginiana). 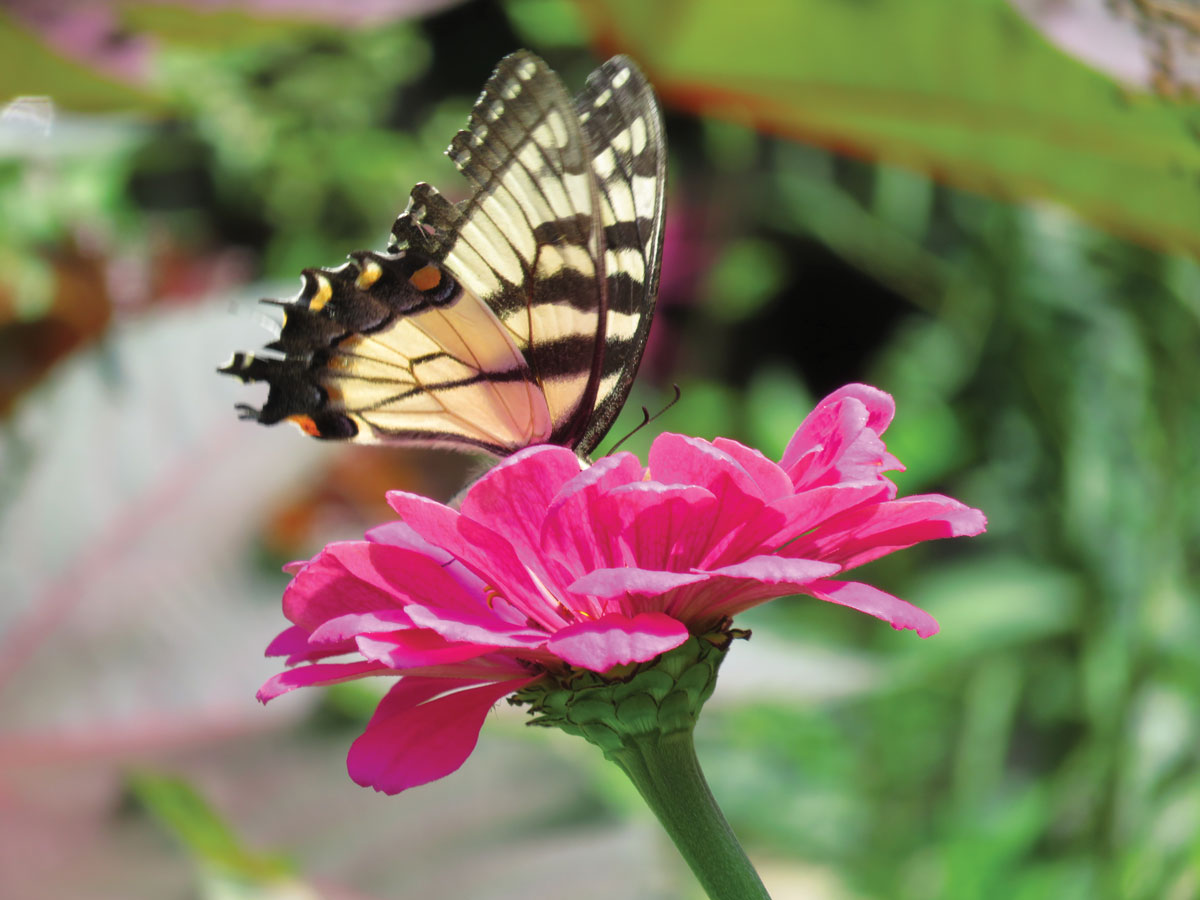 Eastern tiger swallowtail caterpillars are remarkable. Young caterpillars are brown and white and resemble bird droppings. As they mature, the caterpillars turn bright green and have two black, yellow and blue false eyespots on the thorax above and behind their actual eyes. The head of the caterpillar is small, inconspicuous and tucked under the body. If bothered, the caterpillar mimics a snake’s head with glaring eyes, a nose and mouth, deterring predators. Furthermore, if pecked by a bird, or touched by a curious gardener, the larvae emit a foul-smelling blend of protective acid secretions from bright-orange glands in their neck region.

The eastern tiger swallowtail is the state butterfly of Alabama, Delaware, Georgia and South Carolina. Since you asked: the Pennsylvania state insect is the firefly (Photuris pennsylvanica).

Tulip poplars are also very important for many pollinators because the flowers produce abundant nectar and pollen. Honey bees, native bees and hummingbirds all visit tulip poplar flowers. Beekeepers consider tulip poplar a major honey plant. The honey is described as fairly strong with a robust, smoky flavor and a rich, reddish-brown color. It is more suitable for baking than table use.