Sure, you can probably get a cup of tea at your favorite coffee shop. But, if you really want to explore a world of flavors and experience the ritual that surrounds tea, you’ll need to visit a bona fide tea room.

Actually, this nation was built on tea. The first shipment of tea to the New World landed at the port of New Amsterdam (now New York) in 1650, courtesy of Peter Stuyvesant, the last Dutch official in New Netherland. Tea became a craze (envision a Colonial American mochaccino), and soon everyone – from work hands to silver-spooned elites – became tea drinkers.
As we know, this led to some heavy taxation and ultimately the Boston Tea Party. Seen as a connection to Mother England, tea got a bad rap.

Yet, the brewed concoction held on to our palates despite war taking another toll on its future as a favorite American beverage. During World War II, Americans lost their connection to yellow, white and many green teas as China and Japan became our enemies. As a result, black tea, mostly sourced from India, dominated the market. When trade lines started to reopen in the ’70s and ‘80s, Americans began indulging in the unique offerings that made their way to the U.S.

I know Teavana, whose motto is “where we love, breathe and dream of tea” (there’s a location at Park City Center) is never going to enjoy the commercial success of Starbucks, but tea can stand just fine on its own. Between the years 1993 and 2008, the American specialty tea market quadrupled and now does a “brisk” business of over $6.8 billion a year. According to the Tea Association of the U.S.A., we consumed 80 billion servings of tea – more than 3.6 billion gallons – in 2015.

Gone is the custom of daily tea (except, of course, in the South, where Sweet Tea is worshipped), but for those who still want to enjoy a traditional English tea, I found two spots nearby.

I was glad I called for a reservation at A Tea Affair in downtown Lititz. Placing my call on a Saturday morning, 2:30 p.m. was the earliest time I could get a table for four that day. Afternoon tea it was!

I really wanted to get my wife and two kids in for tea and scones. The offering on this particular day was a buttery, soft raspberry scone served with lemon curd and a selection from the tea menu; I went straight for a Darjeeling – Silver Green – I’d never heard of before.

Turns out Makaibari Tea Estates has been producing quality teas in the Himalayan foothills since 1859, and it is one of only a few that offer a green tea from the land of Darjeeling. Their Silver Green is harvested year-round and was developed in the ’80s as the first green Darjeeling. The tea gets its name from the delicate, silver streaks that run through the green leaf. It is a light and earthy tea, which – trust me – should not be steeped for more than three minutes. Steep it any longer and the tea loses its gentleness and takes on a slightly acidic flavor. 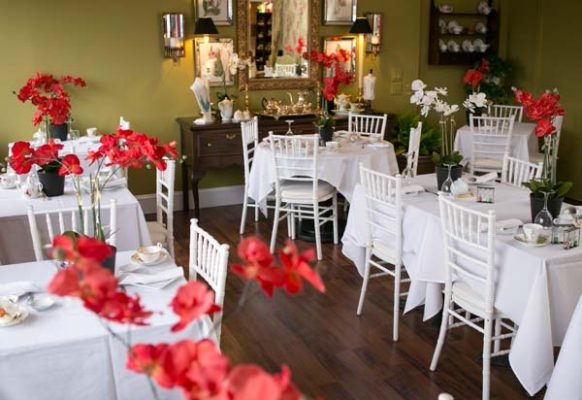 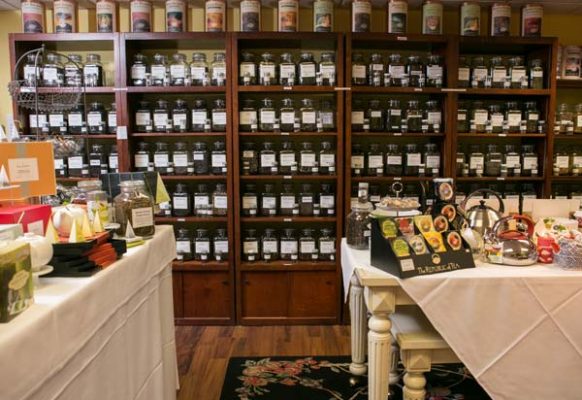 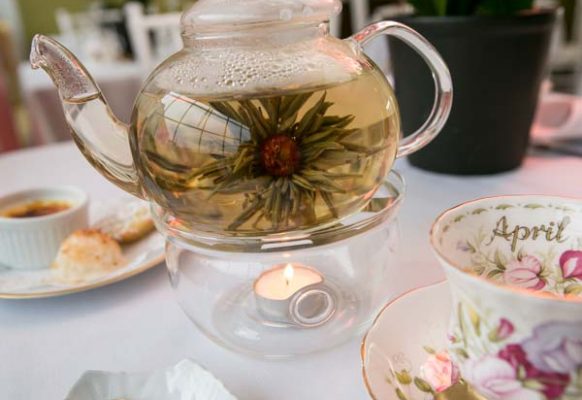 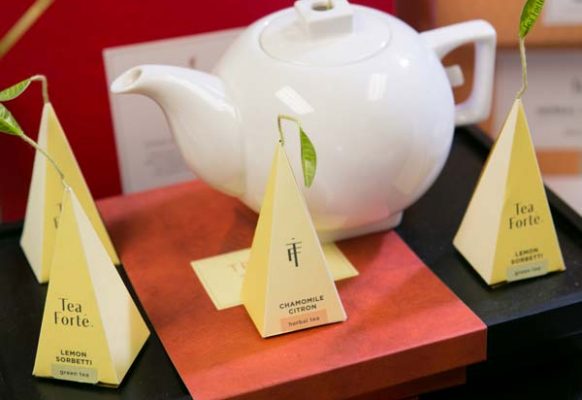 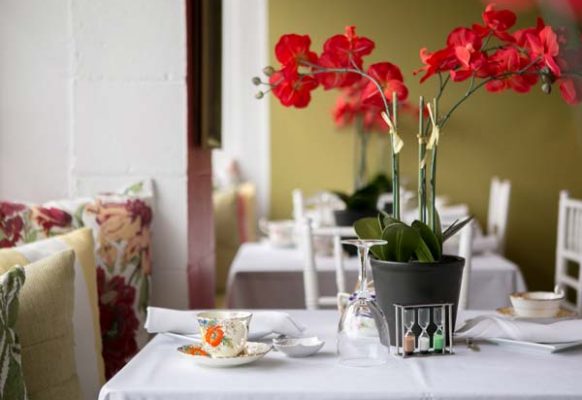 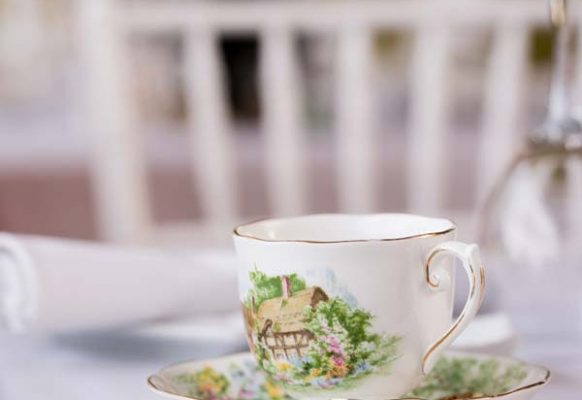 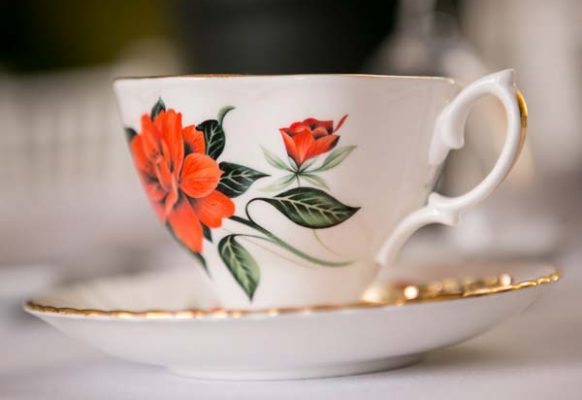 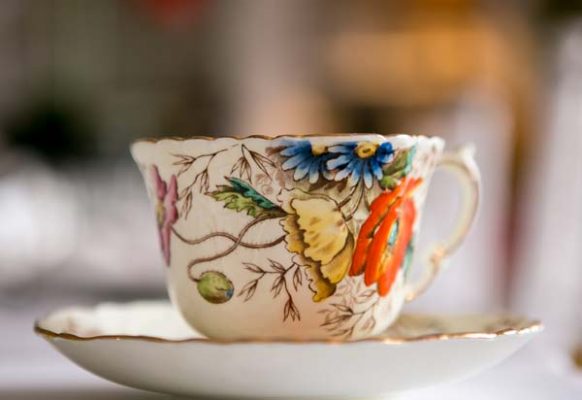 Not only is Makaibari making wonderful-tasting teas, but they are at the forefront of industry improvement. In 1988, Makaibari earned the first organic certification for a tea garden in the world; they were Fair Trade certified in 1993, and now the producer leads the way for sustainability and environmental conservation with their practices.

A Tea Affair opened in 2010, and when I visited, it was set up to accommodate 36, but the flexible room can accommodate bridal parties, baby showers and other celebrations. They’ve been known to host a business meeting or two in their convenient off-Main Street location.

A Tea Affair’s signature offering is a three-course High Tea. The first course is tea and scones of the day. Either salad and quiche or soup of the day makes up the second course. Depending on the size of the party, the third course is presented on a double or triple tier, which holds four tea sandwiches, French Crème Brûlée, and a variety of pastries. Luncheon and Garden teas are also available. Special teas will be held for Easter (April 15) and Mother’s Day (May 13). Their well-stocked gift shop offers more than 350 teas.

Google led me to The Tea Trolley and owner Rachael Cox. Her emporium is literally feet from the Mason-Dixon Line in York County. After a scenic, late-morning drive, I found myself at her circa-1880 respite for tea lovers. The building, which is used solely to hold tea gatherings of all sizes, was originally home to one of the founding fathers of Delta, the quaint town nestled between towering hillsides famous for its slate.

Growing up in England, Rachael always enjoyed tea time; she brought her taste for tea to the States in 1991. Before securing and renovating the structure in Delta, the English expatriate catered private tea events in Pennsylvania and Maryland.

The Tea Trolley’s two-hour, full English Tea is its most popular offering and includes four courses: soup du jour, finger sandwiches, miniature desserts, and a scone served with lemon curd, jam and cream. Smaller tea experiences are also available, the most basic being Cream Tea during which guests are presented with a scone served with all the accouterments and choice of loose-leaf tea. 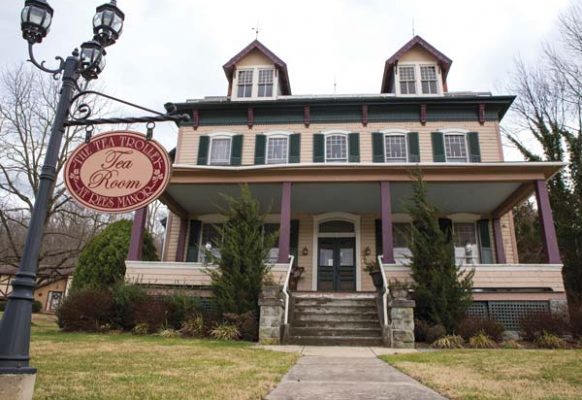 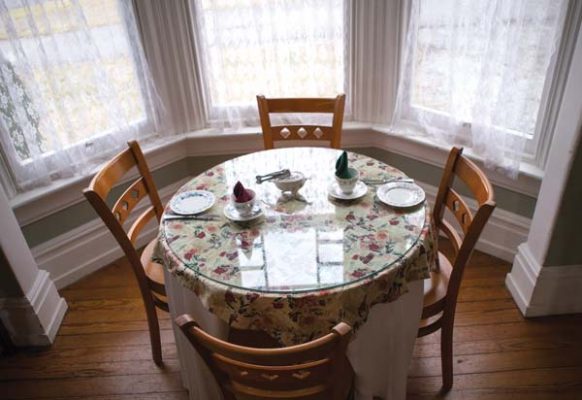 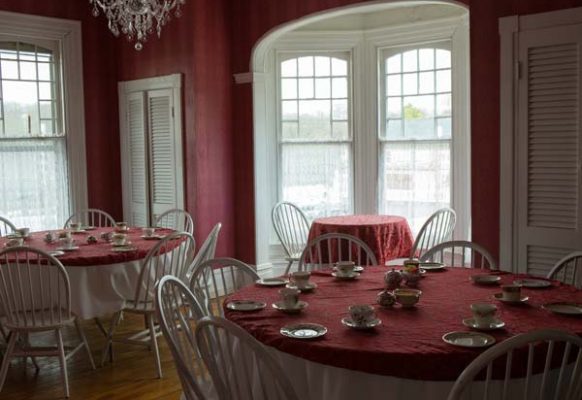 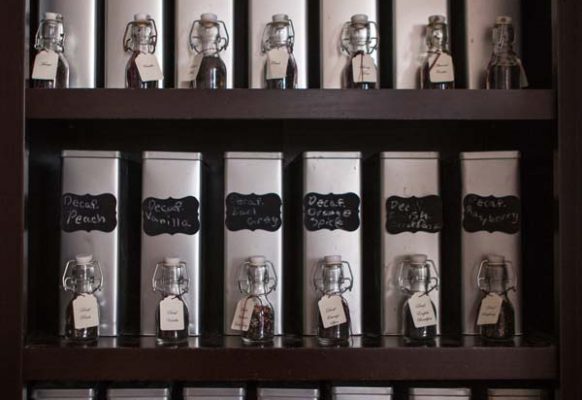 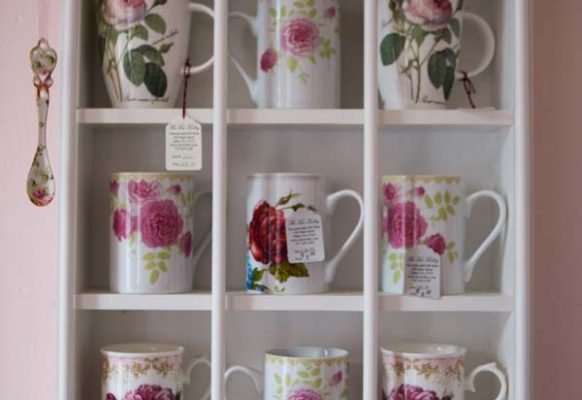 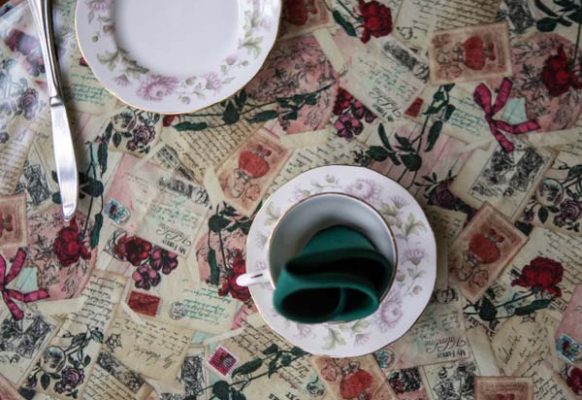 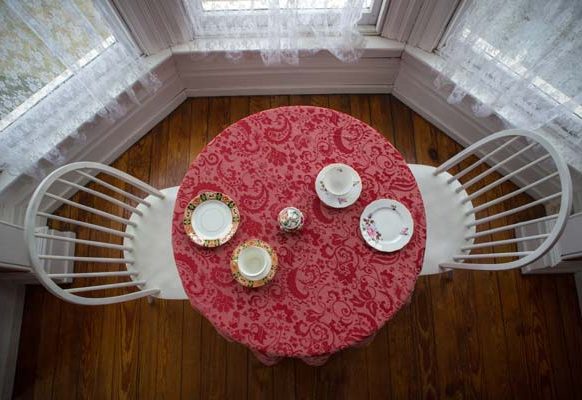 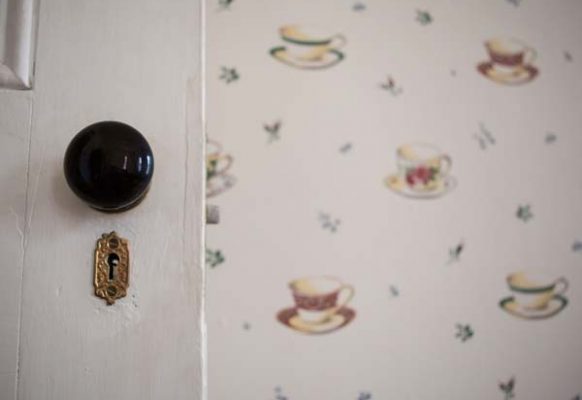 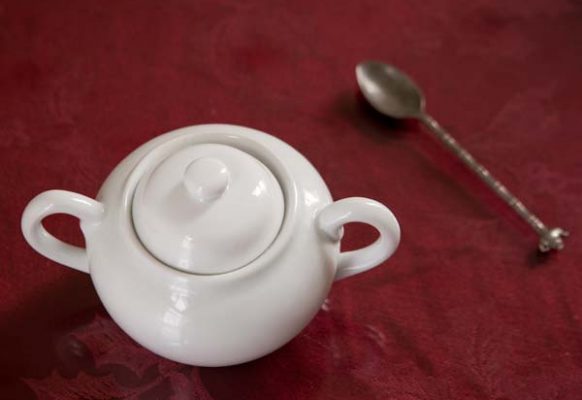 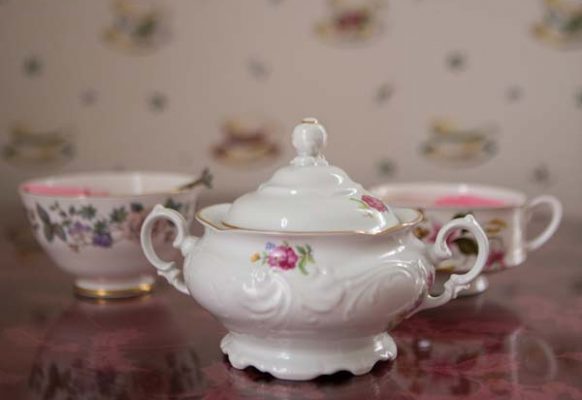 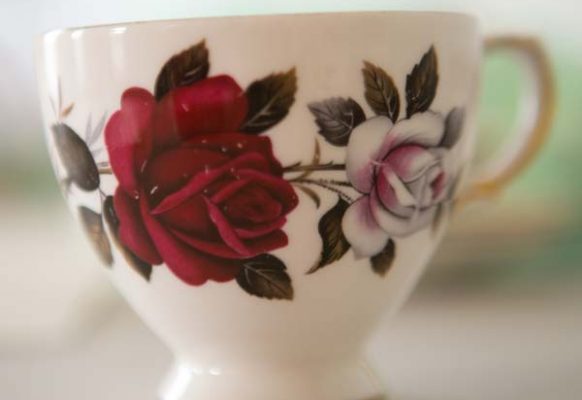 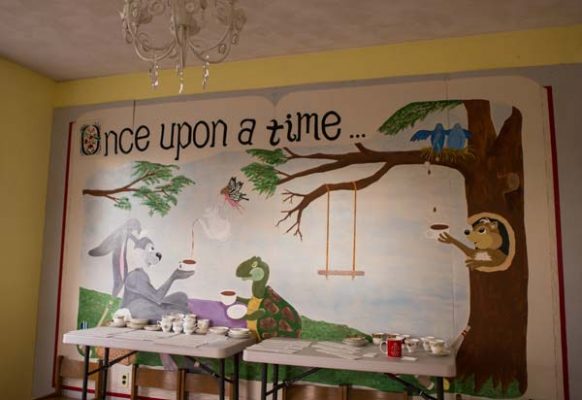 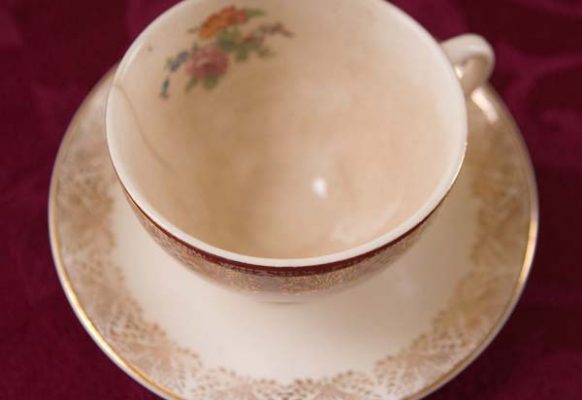 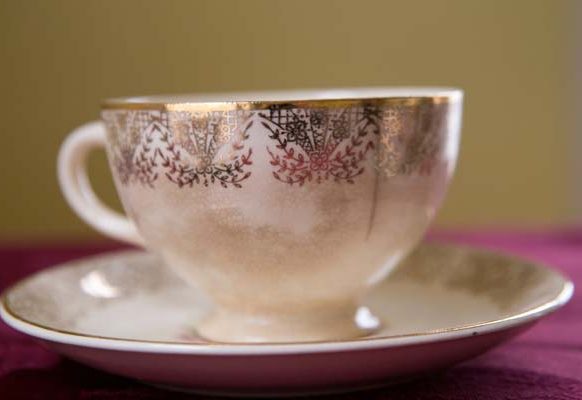 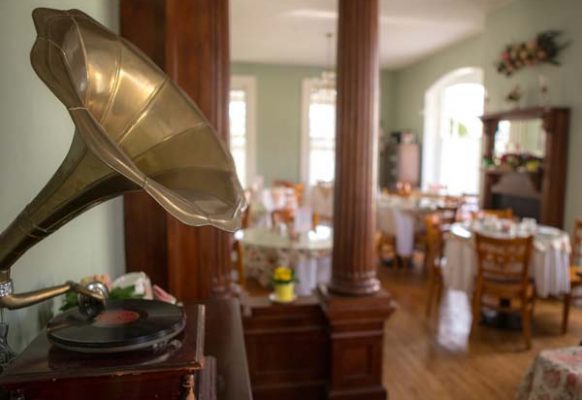 Rachael smiled as a server presented me with a pot of freshly brewed Darjeeling tea. “I like a Darjeeling, so I was impressed when you picked that one,” she laughed. “We have at least 30 different [Darjeeling] teas on our menu.”

Visitors will not find any herbal teas at this more traditional-minded eatery, but there is always a selection of seasonal teas for the more adventurous imbibers. For example, to celebrate Valentine’s Day, The Tea Trolley offered chocolate raspberry, strawberry and cherry teas. The Almond Cookie is a favorite year-round flavored tea.

Throughout the year, The Tea Trolley offers six special events. Upcoming is a Mother’s Day Tea on Friday, May 12, and two seatings being offered on Saturday, May 13. The event features an upgraded menu and a take-home favor. It seems the entire house is tea-oriented, as Rachael opens several rooms to private events like baby/bridal showers and birthday parties. There’s even a room with a whimsical mural and closet filled with dress-up clothes dedicated entirely to children’s parties and teddy bear teas.

Shoppers will find an eclectic array of tea-themed gifts and accessories in the gift shop. Reservations are recommended, but walk-ins are accommodated. 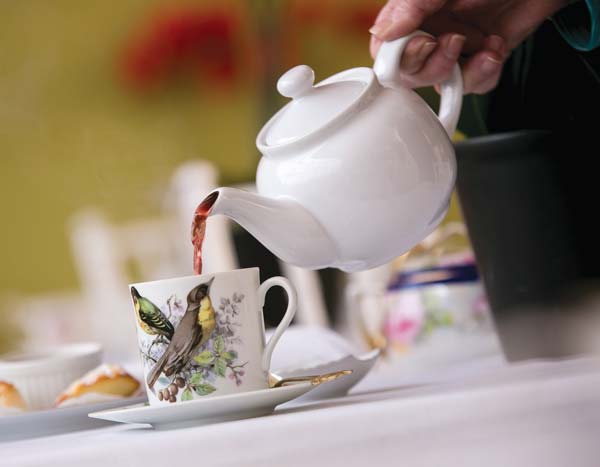