“Only the roadside weeds are flourishing; my prized perennials are languishing during all this heat and humidity,” lamented a gardening friend late in August. “Most are requiring almost daily watering.” 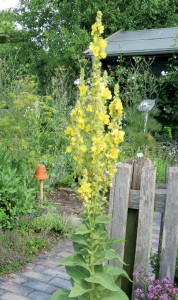 This gardening journey will take a look at three of these so-called “weeds” and consider their practical and ornamental worthiness in our designed borders.

One of the most commonly seen “roadside weeds” around Lancaster County is mullein (Verbascum thapsus), which  was introduced here from Europe many years ago. It is usually a pioneer plant found in well-drained, dry and sunny open areas where the ground has been disturbed: fields, roadsides and forest openings. It does not like shade.

Mullein is in the same plant family as garden favorites like snapdragons, foxglove and penstemon, but it is a biennial. In the first season of its growth, there is only a rosette of up to 12 inches long and gray leaves with a soft, dense mass of hairs on both sides. The following spring a single sturdy stem – up to 5 feet high – emerges from the middle of the felt-like leaves. This year I had one that reached almost 7 feet high (one of the plant’s common names is Aaron’s Rod). At the end of this second year, the plant dies.

The leaves at the base can be broad and up to a foot or more long, but they become smaller as they ascend the stem alternately. Thus during rain, the smaller leaves above drop the rain on the larger leaves and down to the roots, very practical since mullein is often growing naturally on very dry soil.

The yellow flowers along the stem bloom a few at a time from July to September. Many insects – including bumble bees, honey bees and hover flies – make use of  the flowers for nectar and ensure pollination.

One mullein plant is said to be able to produce 100,000 seeds! The seeds survive almost any conditions and can last up to a century. Since mullein can’t grow in the shade, the seeds can languish in the soil waiting until plants around them die or are removed. The abundant seeds are relished by goldfinches, Indigo buntings and other birds.

Mulleins are usually left alone by grazing animals because their thick, hairy leaves irritate their mucous membranes. Hummingbirds have been reported to use the soft leaves to line their nests. Few bugs attack the plant, although some grasshoppers will nibble at the leaves. The fuzzy rosette of leaves provides shelter for lady bugs and other insects throughout the winter as well as for spiders, toads and frogs.

Both the flowers and the leaves have been used historically as a supposed home remedy for a vast number of health conditions. Note the seeds are toxic to humans. Should you be a believer in any of the far-fetched claims, be sure not to confuse this plant with foxglove (Digitalis), which has a similar leaf structure though quite different flowers. A tea made from foxglove is lethal.

My Eagle Scout gardening helper tells me that the down on the leaves and stem makes outstanding tinder when quite dry and will ignite with the slightest spark. One of the old names for mullein is Candlewick Plant, since it was used to make oil lamp wicks. There are also old tales of the stalks being dipped in animal fat to burn as torches. The seeds are reported to intoxicate fish when thrown into the water (the active compound is a saponin, a soap-like toxin to cold-blooded aquatic animals). The mullein stuns the fish, which float to the surface making them easy to catch in nets.

I value this roadside weed in my garden for its tall narrow stature, long flowering period, tolerance of heat, drought, and poor soils, and that it is a magnet for goldfinches. In the past decade, a number of hybrids have been introduced by breeders. Some have larger flowers, shorter heights or a tendency to be perennials. I have not grown any of these. My point of view is that plant breeders are sometimes striving to improve flowers that are just fine as they are. Remember that some hybrids do not produce seeds for our birds.

‘Southern Charm’: pastel shades of lavender, buff, cream and rose on 2-to-3 foot spikes. It grows easily from seed, often blooms the first year and will self-seed. It blooms late spring into early summer and sometimes reblooms in the fall. 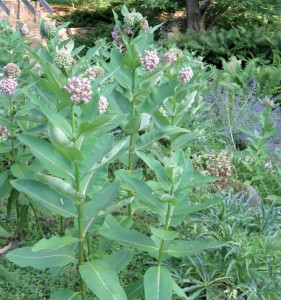 Common milkweed (Asclepias syriaca) is a perennial that is native to eastern North America and was described as early as 1635. Early on it was confused with a species from Asia Minor, hence the syriaca. It is found in full sun and dry, shallow, rocky soil in fields, waste areas and roadsides. It often forms extensive colonies in the wild. It reaches 2-4 feet high on stout stems, and the sweetly fragrant large balls of pink, mauve and white flowers appear in high summer. The leaves are light green with red veins. The stems and leaves exude a white latex when broken.

Milkweed does not transplant well but is easily grown from seed and will self-seed in the landscape unless the prominent, warty seed pods are removed prior to splitting open. The flossy seeds are dispersed by the wind in September and October. The plant does attract a colorful milkweed beetle, and there is a milkweed aphid, which can be controlled with soapy water. The seed pods are often used in dried flower arrangements.

The flowers are a nectar source for honey bees, bumble bees, tiger swallowtails, fritillaries, hairstreaks, painted ladies, hummingbird moths and others. The reason I urge garden cultivation of common milkweed is because the leaves are an obligatory food source for monarch butterfly caterpillars. Monarch butterfly populations have been dramatically declining because of housing developments and because milkweeds in growing fields and meadows are being eliminated with herbicides.

Butterfly gardens are justifiably popular in botanic gardens and are promoted to home gardeners in the horticulture press. But, it is just as important to grow common milkweed because of its role in the reproductive cycle of the much-loved monarch. The tender new growth on the common milkweed is a preferred egg deposit site and larval food source. One source advises cutting the large shoots of a few plants to half their height before they bloom to encourage more abundant sprouting of these tender new leaves. Other plants should be allowed to mature normally for larger butterfly and moth larvae and for seed production.

Native Americans used milkweed as a source of fibers. In World War II, elementary children collected the floss from the seeds for use in floatation life vests and in pillows. 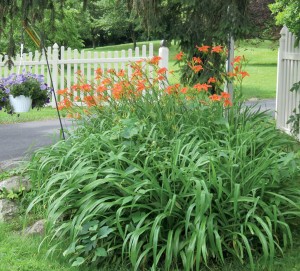 The roadside daylily, (Hemerocallis fulva), is another showy roadside colonizer plant that many mistakenly think is a native plant but was introduced from Asia in the late 19th century. It is commonly found around old homesites. It is just as tolerant of poor soil, summer heat and humidity as the mullein but will also grow in part shade. It is sometimes called tawny daylily because of its large orange flowers, which open individually, each for one day in the summer. However, each spike will have 10 to 20 flowers, providing a long display during early summer. It is rarely sold commercially because of the countless lily hybrids that are favored. Like its cousins, it is extremely adaptable, easy to grow and multiplies readily.

I think it is a valuable plant for  town and country borders because it provides a punchy color contrast, can be massed in larger areas and is very effective in curbing soil erosion when planted on slopes. To maintain a tidy appearance, the spent flowers should be deadheaded and the scapes removed when flowers have completed bloom. After the flowers have gone, the bright-green, fountain-like leaves add texture for the rest of the season.

Daylilies can be considered a large-scale groundcover because they effectively crowds out weeds. Admittedly, they can get established in meadows and forest edges and pose a threat to native vegetation. The thick tubers are a challenge to control once they take over. Hence, some unflattering common names are railroad daylily, outhouse lily and ditch lily.

H. fulva appears on the possibly invasive list of several states and agencies; nevertheless, because of its reliability and ease of culture, it makes a very utilitarian garden plant in suitable locations. 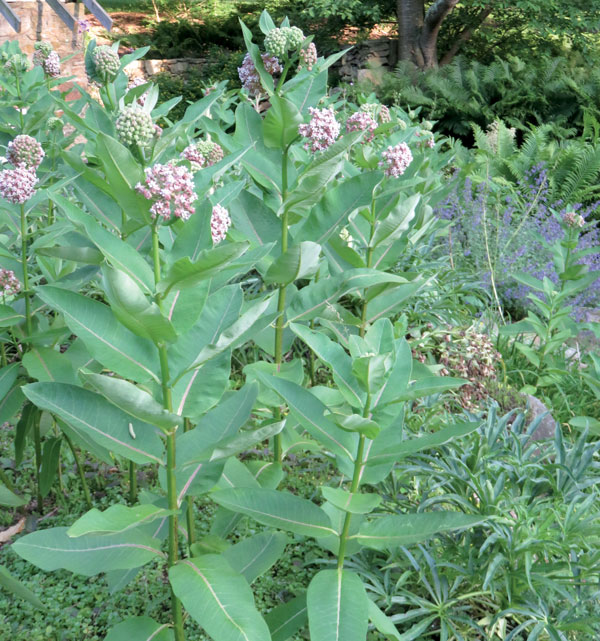