Rebecca Addington could not be happier. After years of following along a circuitous career path, she became a business owner when she opened Ville & Rue in 2019. 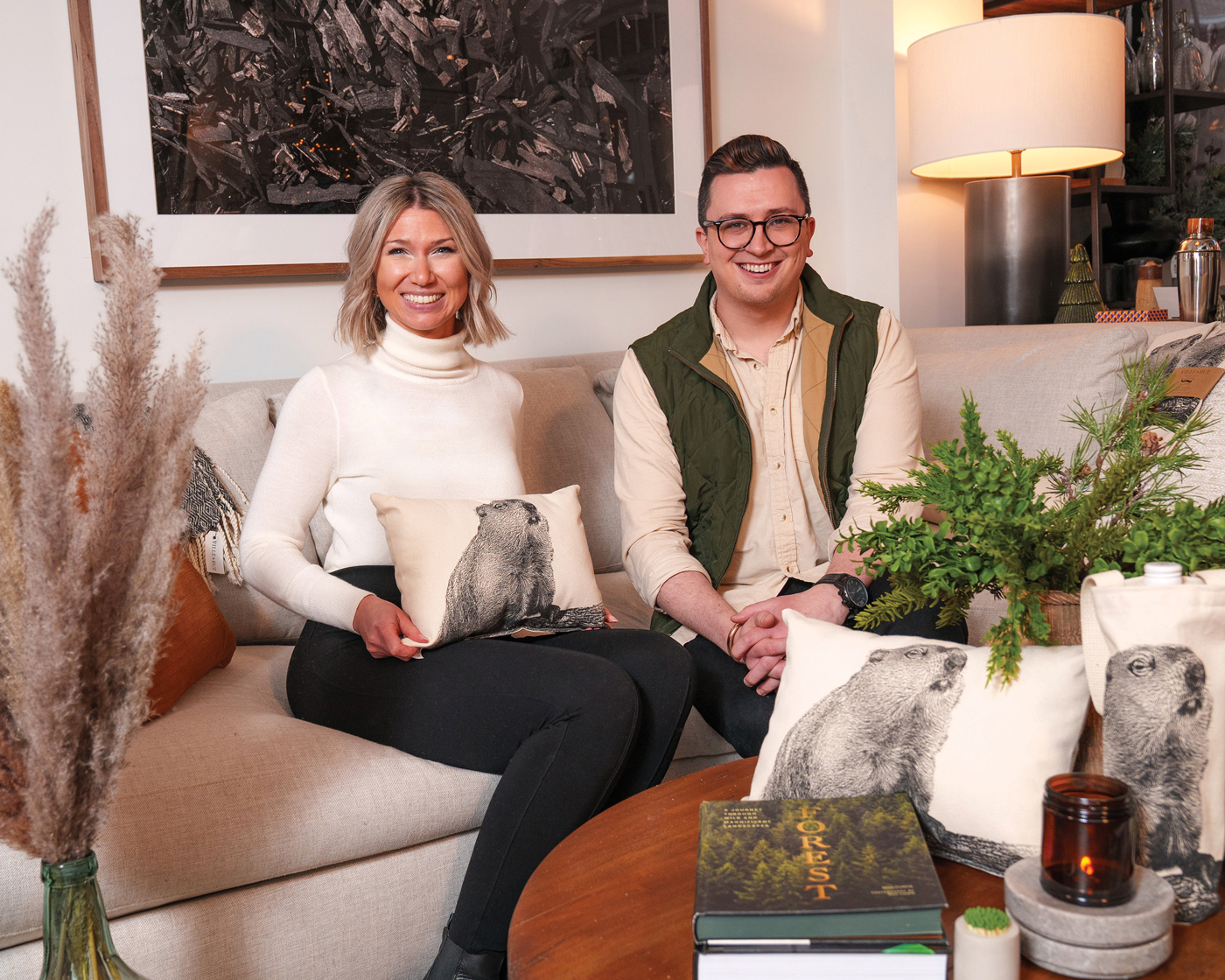 Rebecca Addington and Michael Chiodo are excited to be offering a fourth edition of Poppy products, which will make their debut on February 2, Groundhog Day.

A native of southern York County, Rebecca had a Lancaster connection early on, due to attending Lancaster Mennonite High School. After graduating, she headed for Susquehanna University, where she earned a B.A. in communications and public relations. She parlayed her degree into a job with a Baltimore advertising agency. “I just wasn’t happy,” she says. “I started doing a lot of soul searching.”

What really spoke to her was anything home-related. “So, I went back to school,” she says of earning a degree in interior design from the Art Institute of York. From there, Rebecca went on to work for architectural firms, a real estate company and Pottery Barn, where she held positions with the company’s Lehigh Valley store. 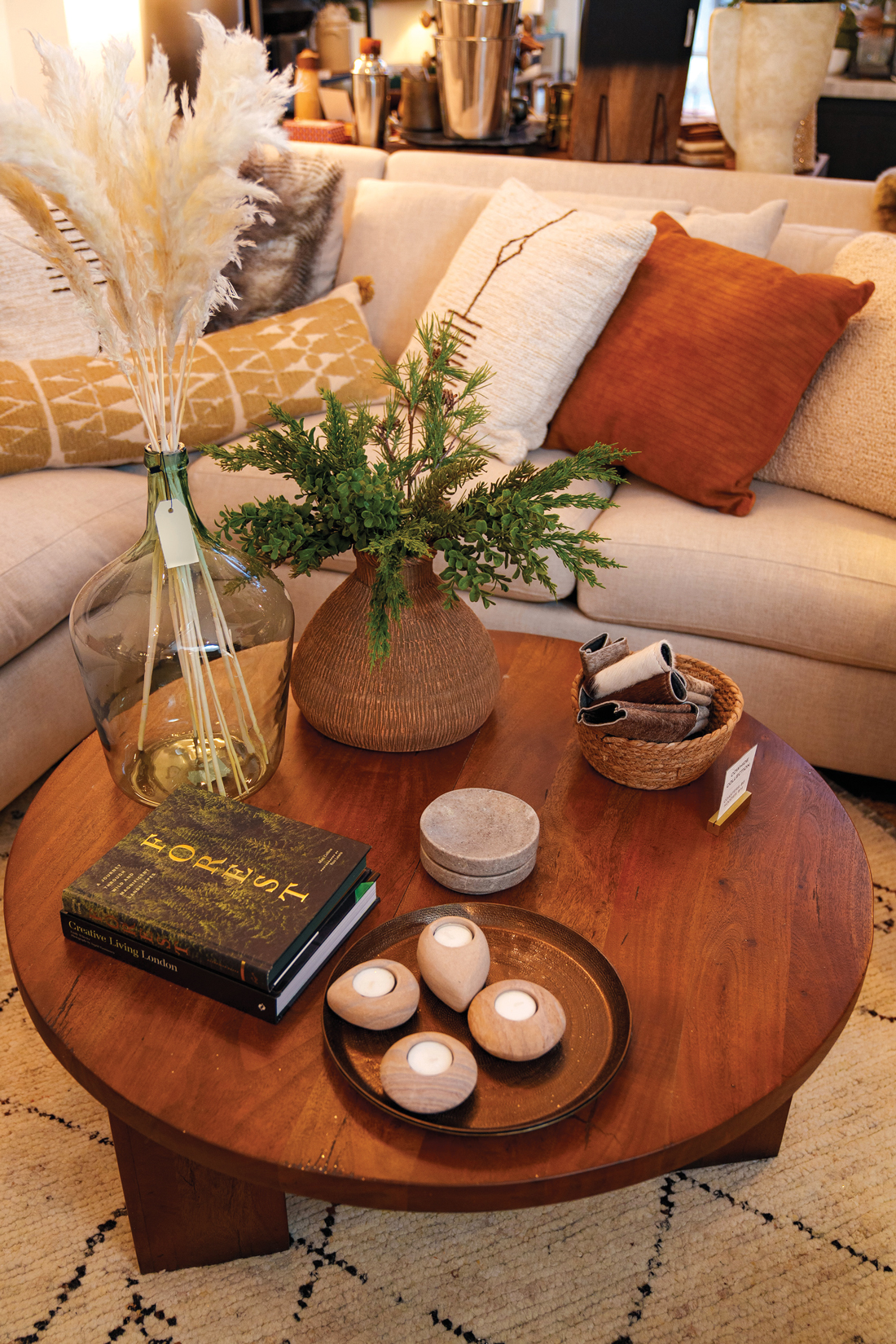 Rebecca reports that customers have been concentrating on creating comfortable, attractive and cozy living rooms as of late.

While exploring Bethlehem, Rebecca was drawn to a unique home store called Domaci. She struck up a friendship with its owners and in 2016 became associated with Domaci, serving as its design services coordinator. Two years later, she transitioned to becoming a co-owner and chief design officer. The role allowed her the best of all worlds: retail, customer relations, technology, marketing, design and working with vendors were now part of her responsibilities. The experience definitely broadened her horizons.

When Rebecca’s husband, Wesley, became associated with a law firm in South Central Pennsylvania, the plan was for Rebecca to open a Lancaster location of Domaci. In the end, Rebecca and her partners agreed that such an expansion was not in the best interest of Domaci, so she struck out on her own and opened Ville & Rue in a small space at 101NQ in the fall of 2019. She admits that going out on her own was daunting. “It was just me,” she says of trying to do it all, from manning the store to working with vendors and customers. “My sister helped out in order to give me a break,” she notes. 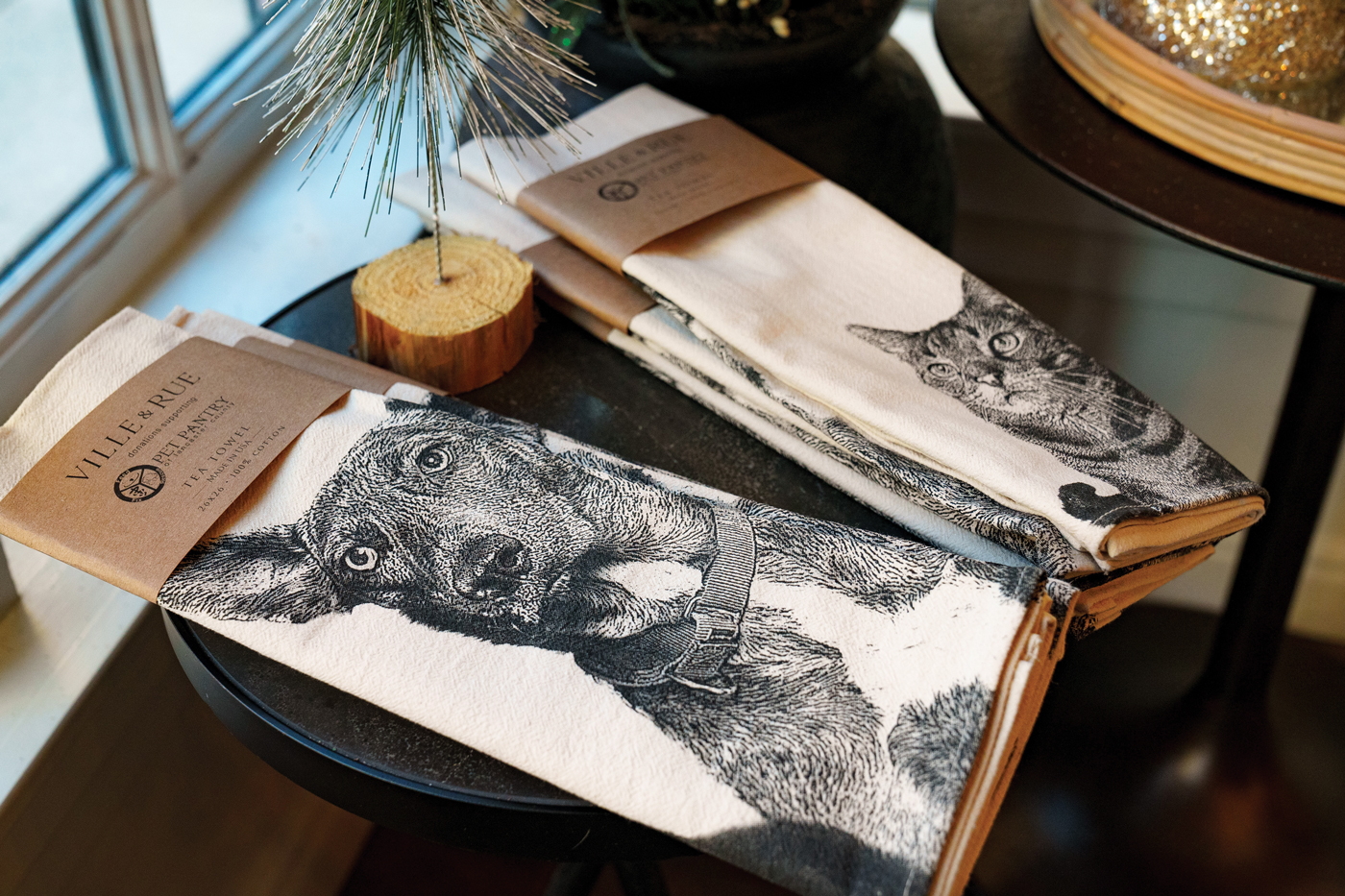 A line of tea towels – from Eric & Christopher – features images of dogs and cats. A portion of the proceeds benefits the Pet Pantry of Lancaster County.

After a year of working solo, she knew she could not keep up the pace. She had fortuitously made a connection with a customer who was not happy with the course his career was taking. “Michael was my best customer. He loves all-things home just as I do. We’d find ourselves talking about life for hours on end,” she explains. In November 2020, Michael Chiodo became Ville & Rue’s brand manager.

Ville & Rue was a hit from the day it opened. The store’s tagline – Home is the Destination – conveys the fact that Lancastrians care deeply about the places where they live. “Our customers really care about the products they buy for their homes,” she says. “They want to know the stories behind the people and companies they are supporting.”

No matter the time of the year, candles and home fragrances are always in season.

As a result, Rebecca views her role as more of a curator rather than a designer. For example, the upholstery company that is well-represented at Ville & Rue is based in Virginia. “I was in a store in North Carolina and loved the upholstered pieces I saw, so I asked the owner who she buys from and then got in touch with the company. Customers love their sofas.” 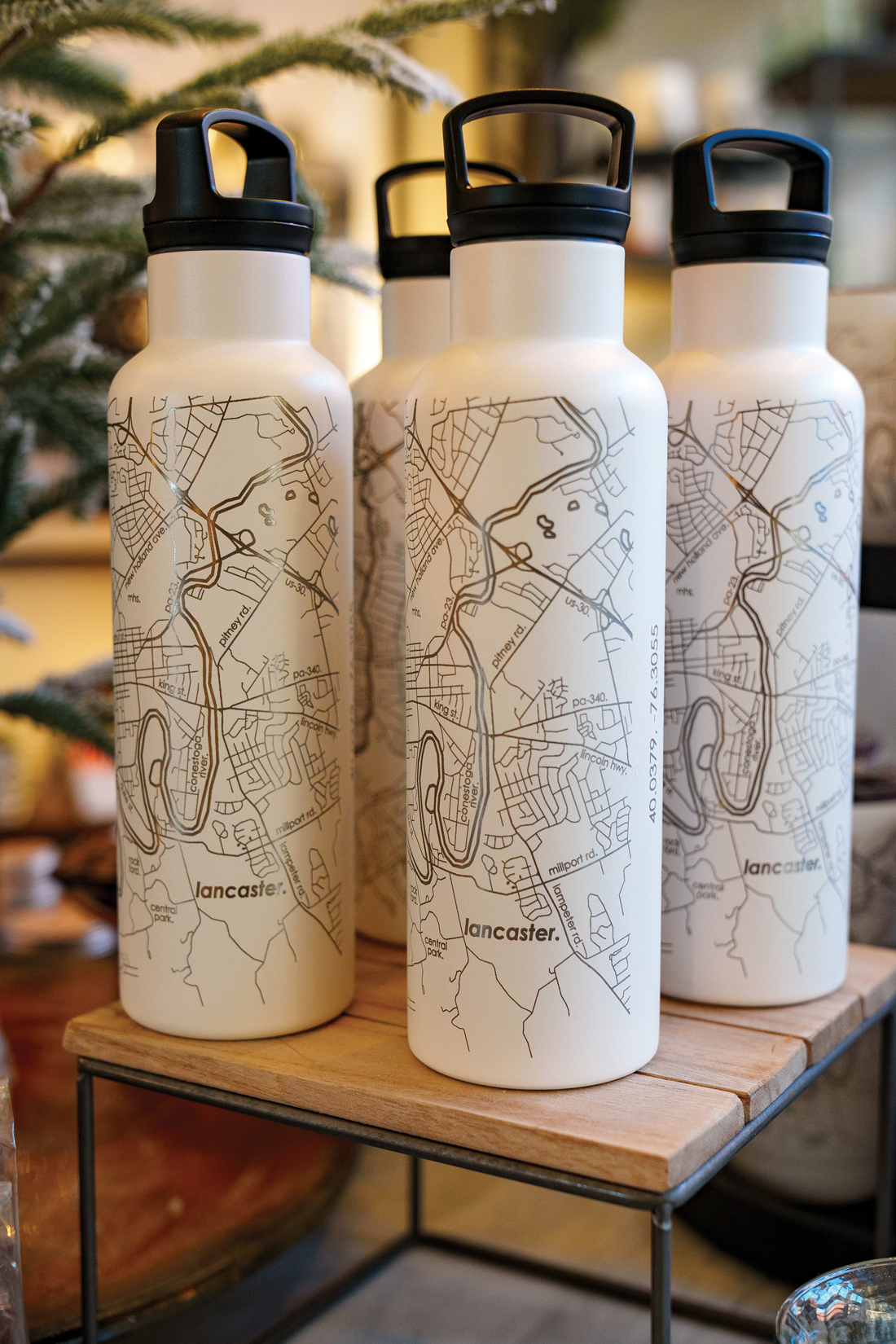 If Poppy proclaims that spring is around the corner, you’ll need a water bottle for hikes and bike rides. Ville & Rue carries a bottle that is embellished with a map of Lancaster.

Rebecca also has a knack for finding those all-important elements that add to the cozy factor of a home. Her throws and pillows are sheer indulgences – especially on a winter’s day. Then there are the fragrances. A line of candles named for places like Italy and Santa Fe have the ability to transport you to a favorite destination just by inhaling the subtle scents they exude. She also takes pride in working with and carrying the products of local and regional makers and artisans, as is evidenced by the variety of “Lancaster-made” products that are available.

Meeting Dave and Betsy helped to propel Ville & Rue to another level. “I love animals so I was onboard instantly,” she says of working with Acorn Acres. When she began mentioning the upcoming launch of Poppy products for Groundhog Day 2020 to customers and acquaintances, Rebecca was surprised by their excited responses. “I never knew there were so many people out there who love groundhogs or know someone whose birthday is February 2,” she says. 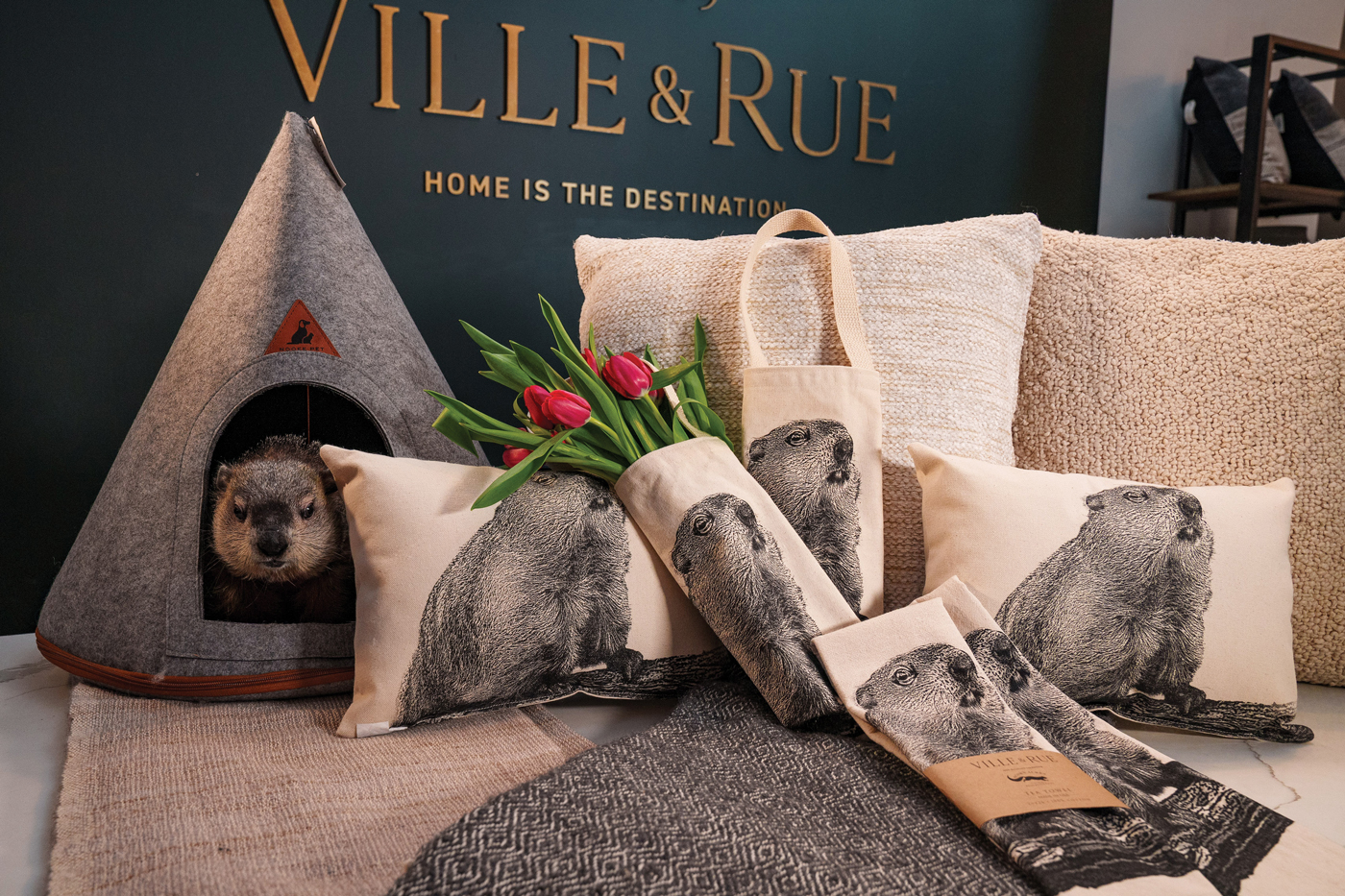 If Poppy predicts six more weeks of winter, you can up the cozy factor with throws and pillows for yourself and a teepee for your pet. (Poppy loves hers!) This year’s Poppy collection will include pillows, tea towels and wine (or flower) carriers. 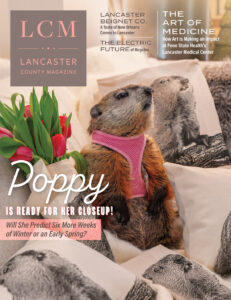 On the Cover: Being the diva she is, Poppy was ready for her closeup! With Groundhog Day still weeks away, photographer Nick Gould covered his bases by styling the photo with comfy throws and pillows to signify winter and bright-red tulips (from Floral Designs of Mount Joy) that hold the promise of spring. Poppy, of course, will make her weather prediction on Groundhog Day, February 2. Poppy was photographed at Ville & Rue in Downtown Lancaster.

Rebecca was more than overwhelmed when February 2 arrived. The early release of the Jeep commercial prompted buyers to go online to purchase Poppy products. “I was in the grocery store that morning and my phone kept chirping in response to sales that were being made online,” she recalls. When she arrived at Ville & Rue for the launch of Poppy products, people were lined up down the street. “It was chaos! The police even showed up on their horses to see what was going on.” Needless to say, Poppy admirers outlasted the products that were available. “So, we started taking orders,” she continues. Eric & Christopher put the Poppy products back in production and promised Ville & Rue would be restocked in two weeks. “So, we did it again two weeks later,” Rebecca says.

A month later, Rebecca confronted Covid. “I was so scared,” she says of not knowing what the future held. Incredibly, Ville & Rue not only weathered the storm but business hummed along just fine due to the fact that so many customers were redecorating and updating their homes.

A year ago, Rebecca decided to take a “giant leap of faith” and move to a larger location on West King Street. Now, she is taking another ambitious step and is expanding into the adjoining building and adding 1,000 square feet to her realm. “It’s going to allow us to have an office and storage space,” she explains. “Plus, we’ll have more room to hold events. Our customers will also be able to enjoy a more leisurely shopping experience.”

Rebecca reports that post-Covid, homeowners remain in-tune with their homes. The pandemic taught us to put all the rooms in our homes to use and, as a result, Rebecca reports that people now seem to be focused on taking second looks at their living rooms. No, not as the museum-like environs of the past, but as rooms that get lived in. “It’s a tricky space,” she says. “You want it to look its best [for entertaining purposes] but at the same time, you don’t want it to look overwhelming [for daily living].” She finds that in designing modern-day living rooms, customers seem to be using the same three words to describe their perfect getaway or gathering spot: attractive, comfortable and cozy. “And, that applies to friends, family and pets,” she emphasizes, adding, “Our goal is to help our clients love where they live.”

Rebecca Addington and Michael Chiodo are excited to be offering a fourth edition of Poppy products, which will make their debut on February 2, Groundhog Day.