This is the one plant that every person who gardens must be able to identify and be respectful of the risks it presents.

I garden in the country where there is always a long to-do list to tackle, especially at this time of year. For decades I’ve depended on the help of teenagers from the local high school. Most have been agricultural science students who enjoy learning about and caring for the ornamental plants I have in my garden. Over the years, two have gone on to PhD’s (Harvard and Cornell); one has joined the Peace Corps; another has earned an MBA; and yet another is the CFO of a large company. I always tell my new helpers (and their parents) that the only significant risks they will encounter are insect stings (hence, use of ear buds is not permitted while working), ticks and poison ivy.

Consequently, the first lesson for a new helper is how to identify poison ivy, since I am never able to get rid of it completely, even though I usually know where it tends to pop up. 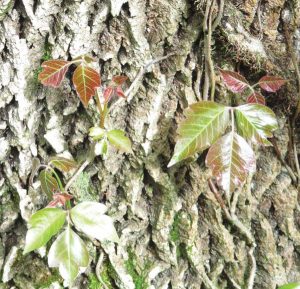 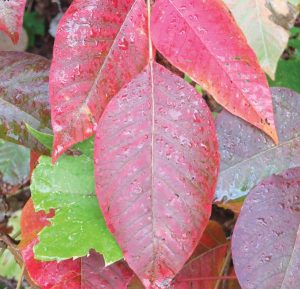 Poison ivy can take on many habits. It is usually a hairy vine that climbs up trees or anything vertical – up to 100 feet – but it can also grow as a ground cover up to 2 feet tall or as a bushy shrub up to 4 feet tall. The Latin name is Toxicodendron radicans (also listed as Rhus radicans). Of course, it is well-known for producing an annoying, itchy rash that is caused by urushiol (you-roo-shee-ol), which is a clear liquid compound in the sap of the plant. Its purpose is said to help the plant retain water.

Poison ivy is not a true ivy (Hedera) but a member of the cashew family (Anacardiaceae). The term “poison ivy” was coined by Captain John Smith in 1609. Whatever we call it, it is a most unwelcome weed!

This American native has a range extending from Canada to South America and is found in all states east of the Rocky Mountains. It thrives along woodland edges and abandoned meadows. It is tolerant of soils that range from acidic to moderately alkaline and will grow in very moist areas with seasonal flooding.

The leaves are deciduous and have three leaflets. The leaves emerge in the spring with a light-green or red-bronze color, mature to a dark-green, and in the fall turn a brilliant red. The elliptical-shaped mature leaflets are smooth and shiny and have only a few teeth (or none) along the edges and a pointed tip. The leaves are alternate on the vine, which has no thorns.

Plants that can be Confused with Poison Ivy:

♦ Virgin’s bower (Clematis virginiana) is a native climbing vine that has countless common names. But, its white flowers appear in summer and the leaves are opposite. It is often confused with the similarly flowering sweet autumn clematis (Clematis terniflora), which is from Asia and has escaped cultivation and become a rampant invasive throughout Lancaster County. Except, it has simple leaves, not three leaflets.

♦ Box-elder (Acer negundo) is a “trash” tree that grows in wet spots. Its leaves have five to seven leaflets, however small saplings can have three leaflets. But, the leaf stalks are opposite (like all maples).

♦ Virginia creeper (Parthenocissus quinquefolia) is a vine that on first glance could be confused with poison ivy, and the plants very often share territory. It mostly has five leaflets, and the leaf surfaces are usually wrinkled and have more teeth than poison ivy. Besides that, it climbs by tendrils, and its fruit is a blue berry.

♦ Blackberries and raspberries (Rubus) have three-parted leaves and are regularly found together with poison ivy. However, they have thorns on their stems (botanically prickles), are never vines and do not attach to trees.

The female plants produce greenish-white flowers in late spring that are seldom noticed. Of more significance, a berry-like, off-white, waxy fruit (botanically a drupe) appears in the fall and is an important winter food for over 60 species of birds. Each berry contains a single seed which, sorry to say, remains viable after passing through the bird’s digestive tract. That essentially explains why one finds poison ivy growing under tree branches.

Vines growing up tree trunks are very firmly attached by little rootlets. They are very hairy, a key ID feature during the winter.
Researchers from the University of Georgia found that poison ivy is particularly sensitive to carbon dioxide levels, benefiting from higher concentrations in the atmosphere. Hence, the growth and potency of poison ivy has doubled since the the 1960s and will continue to rise with global climate change.

It is the urushiol (Japanese name for lacquer) that causes the allergic reaction, making it a form of  “contact” dermatitis. After coming into contact with the plant, the urushiol binds to our skin where it eventually causes a reddish inflammation and itchy bumps that become oozing blisters. The rash often follows in a pattern of streaks or patches from where the plant has come into contact with the skin.

Most rashes are mild and last from five to 12 days. Humans and a few primates are the only animals that get a rash from poison ivy. Urushiol is a very potent oil. It is reported that 500 people could develop an itch from the amount covering the head of a pin. Centuries-old botanical specimens have caused blisters. The dermatitis is even covered by worker’s compensation in some states.

Most people – probably 85-90% – are allergic, and one can be first affected by it at any age. At the first exposure, the rash takes longer to show up, often seven to 10 days. Repeated contact provides no immunity; in fact, the rash usually gets worse as your immune system gets better at recognizing the toxin.

If you think you’ve been exposed to poison ivy, it is important to wash all exposed areas thoroughly – preferably within 10 minutes – to be sure of avoiding an allergic reaction since the urushiol begins to stick within minutes. Wash the area with cold water and soap. Hot water should not be used, as it allows more of the oils from the plant to enter the skin. Be sure to clean under fingernails. If there’s no water available, rubbing alcohol or alcohol wipes will remove it. Wash your clothes and clean your shoes. Many hikers have been poisoned merely by taking off their shoes after walking through poison ivy.

It is a myth that you can catch poison ivy from another person in the household, even if you come in contact with their blisters. The oozing fluids released by scratching blisters are produced by the body and do not serve to spread the poison. If there is an appearance of a spreading rash, it only means that some areas received more of the sap and reacted sooner than other areas or that there is continued contact with objects that have the oil on them. Don’t scratch. It won’t spread the rash, but it can cause scars or infection.

Remember, you can contact it from your pets. A dog’s or a cat’s fur will protect its skin from the urushiol, but it can stay on the fur and rub off on you. When your pet explores areas where the vines grow, bathe him or her with soap and cool water. Be sure to wear gloves!

Never burn poison ivy debris. Particles of the urushiol will be in the smoke and can aggravate your eyes and face. Worse, it can enter your respiratory tract, where it can even cause respiratory difficulty that in some cases could be fatal. Instead, dig up the plants, bag them and throw them away.

In my garden and woodland edges, I spray the leaves with an herbicide to kill the plants. Always wear protective clothing for this job and spray only when there is no wind. Remember that the urushiol remains active – even on dead plants – for years.

You should also clean your clothing, garden tools, camping gear and any other items that came into contact with the plants because the residual oil can remain on these items for a long period of time. I know some gardeners who keep a pair of shoes solely for outside use and do not bring them indoors.

The lesions can be treated with over-the-counter calamine lotion, oatmeal baths and baking soda. Antihistamines may also relieve some symptoms. A traditional ethnobotanical remedy to treat the rash is jewelweed (Impatiens capensis), a 3-to-5 foot annual that is found throughout Lancaster County in moist woods near poison ivy. The advice is to slice the stem of the jewelweed and rub its juicy inside on the exposed skin. It is said to ease the irritation and prevent breakout.

Unfortunately, a reliable long hoped-for vaccine is not available.

One should seek immediate medical attention for a severe reaction such as when the rash covers more than one quarter of the body, or is on the face, lips, eyes or genitals. Such reactions might merit treatment with a prescription steroid preparation, which will dramatically reduce the symptoms. In rare cases, rashes can become infected as evidenced by increased tenderness, pus or an odor coming from the blisters.

A topical product called Zanfel® (zanfel.com)  is widely marketed at industry trade shows. It claims to remove urushiol from the skin anytime after outbreak and relieve itching within 30 seconds. The manufacturer offers research from St. Luke’s University Hospital in Bethlehem as reported in the Annals of Emergency Medicine. This avoids the side effects associated with steroids and sedating antihistamines. It comes with very specific instructions that need to be followed. It is safe for use on the face and genitals and for use by children and pregnant or nursing women. There are no known side effects, and it does not require a prescription.

This information is not intended to replace the advice of your doctor. Lancaster County magazine and Dr. Bitner disclaim any liability for any treatment decisions you make based on this Gardening Journey. 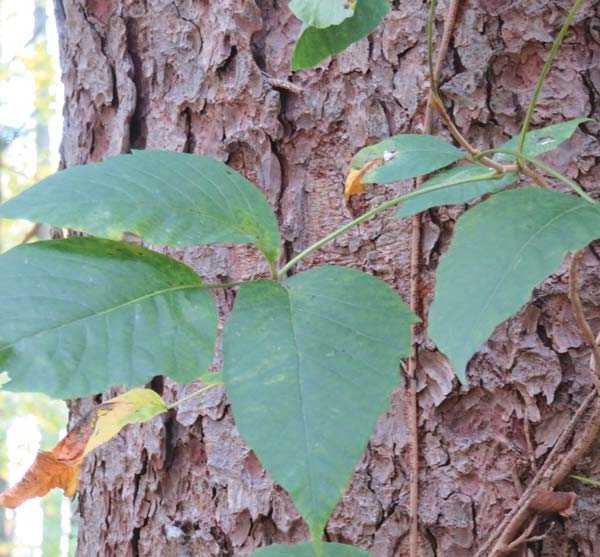