A few years ago, Bill Lauris, the owner of Off the Beaten Path Nursery in Lancaster, clued me in on pawpaw fruit. Occasionally referred to as “Appalachian bananas” or “custard apples,” pawpaws are the largest edible fruit native to North America. Incredibly, one of the largest concentrations of wild pawpaw trees can be found in Lancaster County. 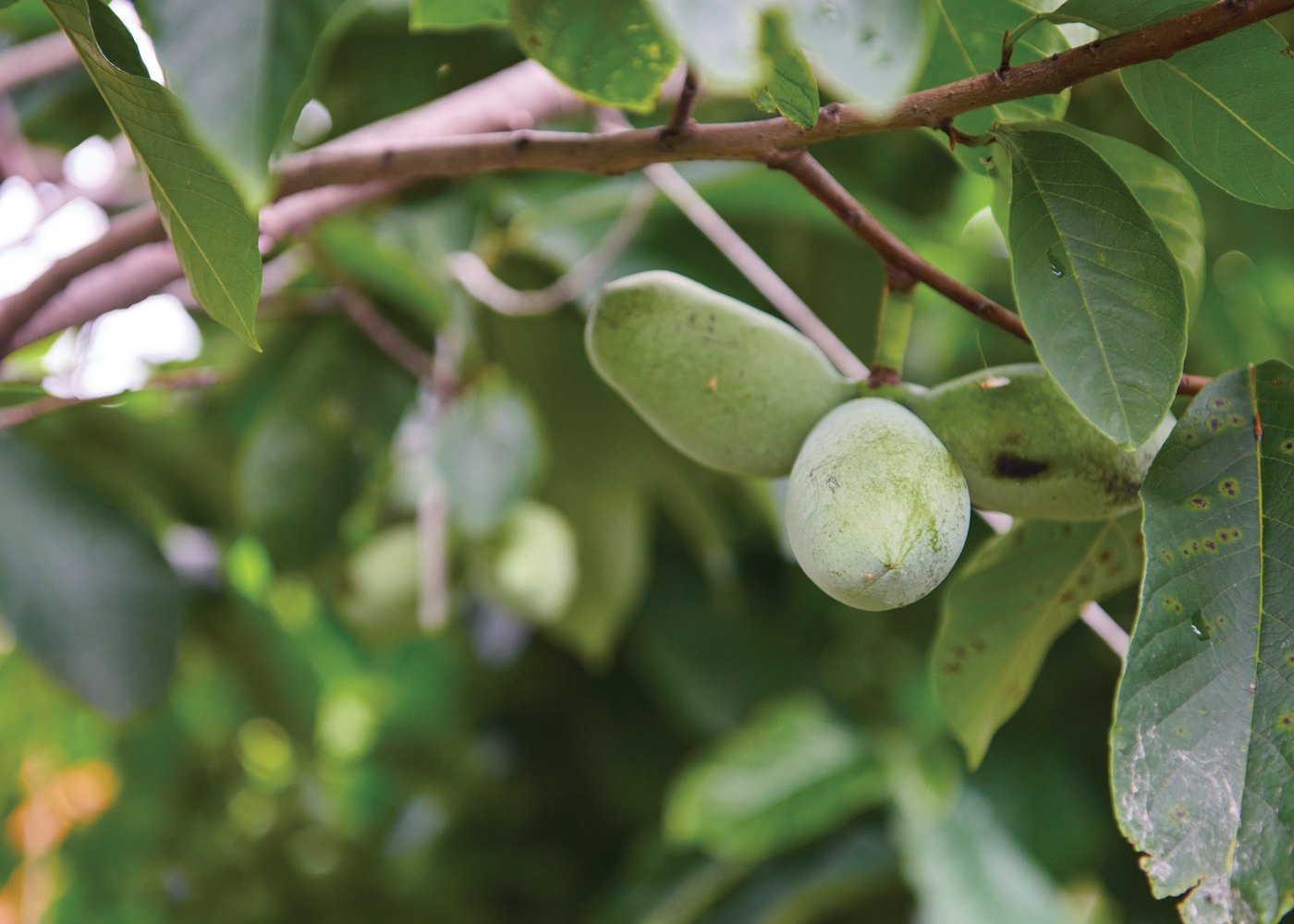 Pawpaw fruit growing on trees planted at the John Wright Restaurant in Wrightsville.

What is a Pawpaw?

Admittedly, a lot of people – especially younger generations – have no clue what a pawpaw (Asimina triloba) is. Pawpaws had fallen off the radar for a number of reasons, including the fact that their short shelf life makes them unlikely candidates for the produce sections of large grocery stores. However, thanks to a “growing” interest in heirloom and native plants, pawpaw trees are making a comeback – the National Park Service, which monitors their growth and spread, regards them as a “small tree” that makes a “big impact.” Outdoor Life calls them the “ultimate tree for survivalists.”

So, how did pawpaws end up in Lancaster County? How did a seemingly tropical fruit make its way to colder climates? The name pawpaw is similar to papaya, a green, tropical fruit that also grows in clusters on trees. Many scientists hypothesize that as the planet warmed, now-extinct mammals, such as mastodons and the bear-like giant ground sloths, ate pawpaws whole, dropping seeds as they migrated north, traversing long distances. 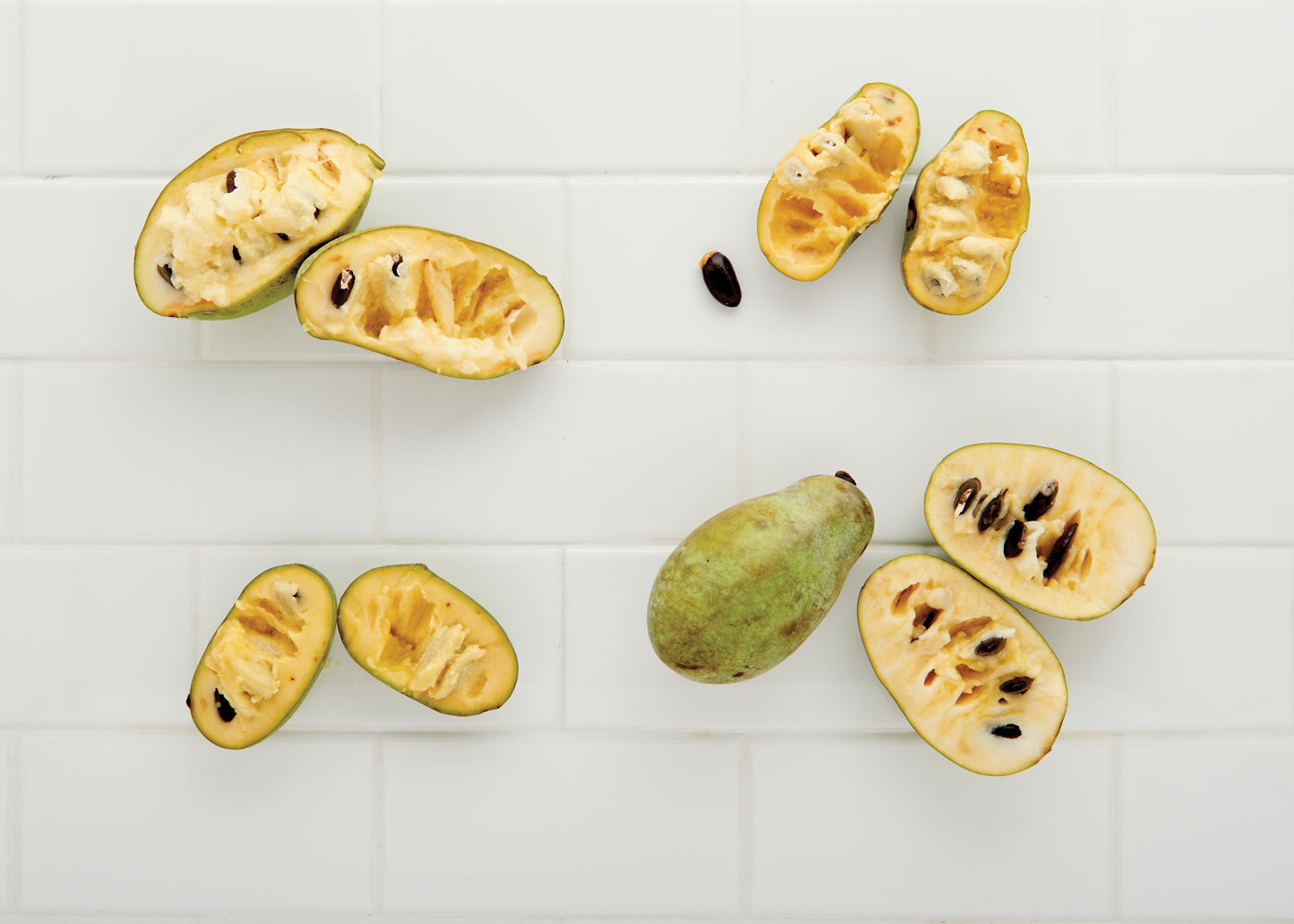 According to historians at Colonial Williamsburg, Native Americans ate both wild and cultivated pawpaws. Two early American foodies, Thomas Jefferson and George Washington, had pawpaws growing in their gardens.

Pawpaws sustained members of the Lewis and Clark Expedition as they ventured into the Pacific Northwest.

Pawpaws also helped to supplement the meager diets of enslaved African people, as well as those making their way along the Underground Railroad. Soldiers from both the North and South subsisted on pawpaws during the Civil War. 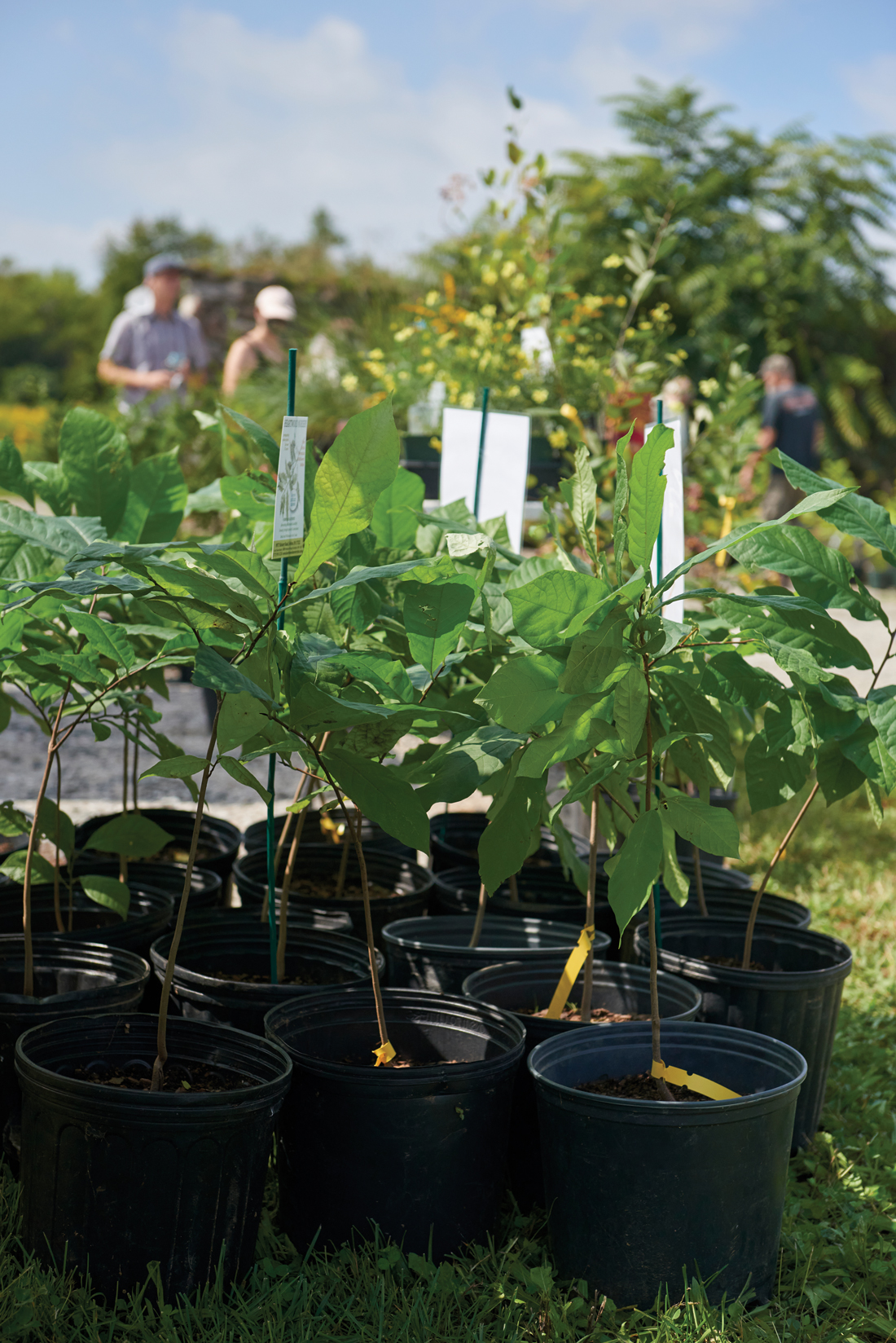 Pawpaw trees vary in size depending upon where they are grown. The average height is 25 feet or more in understory conditions, and 15 to 20 feet in urban areas. They will thrive in either shaded forest areas or in full sun, which will produce a higher fruit yield. Growing as far south as Louisiana, and as far north as Canada, this tropical-like fruit tree is winter hardy to Zone 5. (Lancaster County ranges from 6b to 7a.) The tree produces deep-crimson flowers in spring; the fruit ripens in late summer and is typically available until early October.

As the pawpaw is a native plant, it is not bothered by insect pests. Deer will leave the trees alone, too.

Pawpaw trees don’t often survive being transplanted and are primarily grown in one of two methods: seed propagation and grafted cuttings of known cultivars. When grown from seed, the resulting tree will produce fruit with random traits. The quality and flavor could be less or more desirable than a named variety. On the other hand, cultivars that are grown from cuttings taken from a known tree and grafted onto rootstock, create a cloned tree identical to its parent. Pawpaw cultivars are selected by a producer for their growth and/or fruit traits. Two notable producers of cultivars are Kentucky State University and R. Neal Peterson of Peterson Pawpaws in Harpers Ferry, West Virginia. 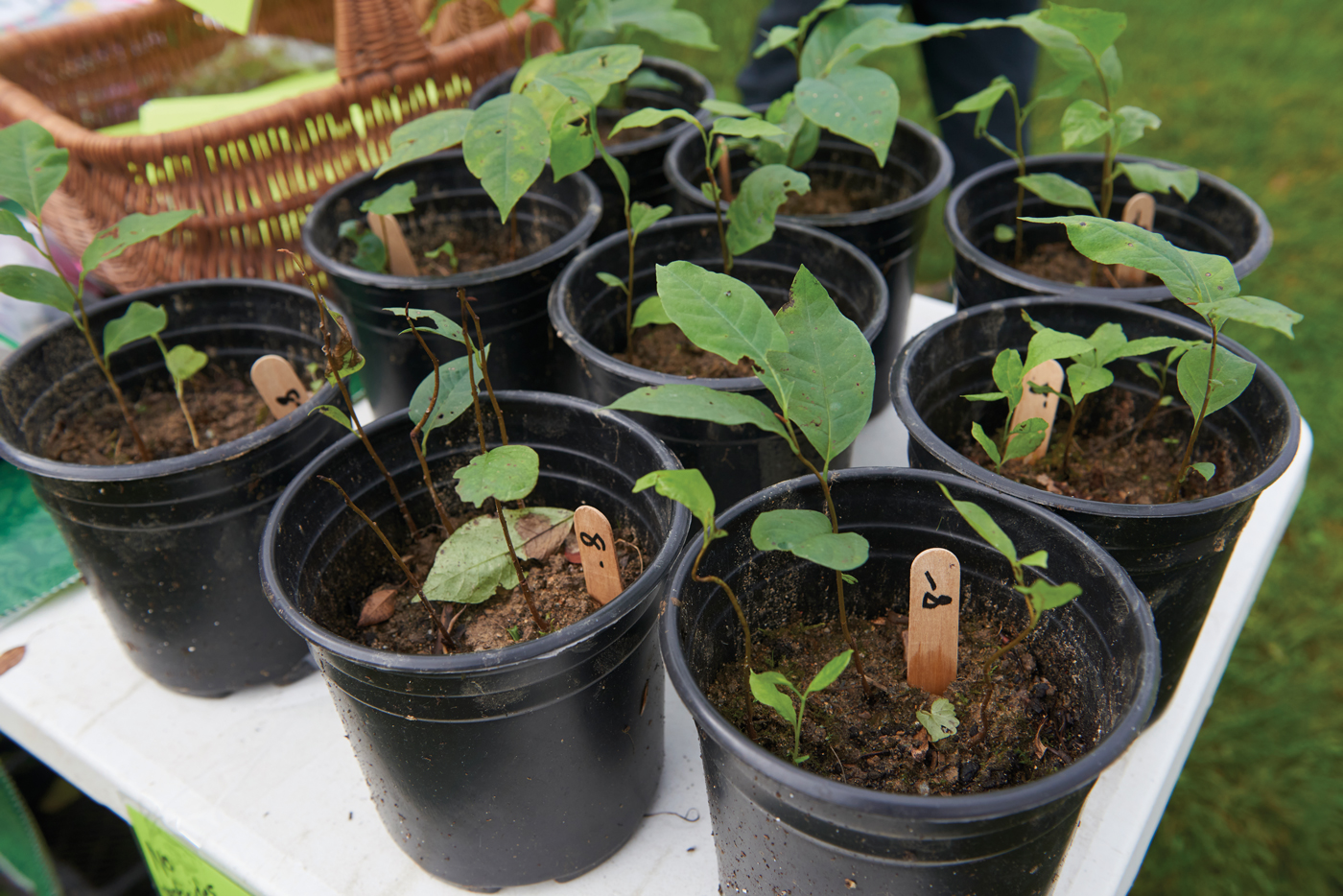 One-year-old pawpaw seedlings for sale at the Horn Farm Center. While less expensive, trees grown from seed will yield fruit whose flavor profiles can vary from tree to tree.

Trees that are grown from seeds take a few years to mature and produce fruit. The risk you take by growing a tree from seed is it might not be prolific or offer consistent quality, a discovery that can only be made after a few years. From seed, fruit characteristics and traits are random. That means while foraging for pawpaws on a hike, you might find some you love and others not so much. However, since seeds are easier to obtain, they can make for a fun gardening project.

Pawpaws will not self-pollinate, so at least two different varieties of pawpaws are needed for a tree to produce fruit.

Taking the shape of a potato, the fruit of pawpaws has smooth, green skin, sometimes with flecked spots. As Bill puts it, “It looks like it has no business being in Lancaster County.” 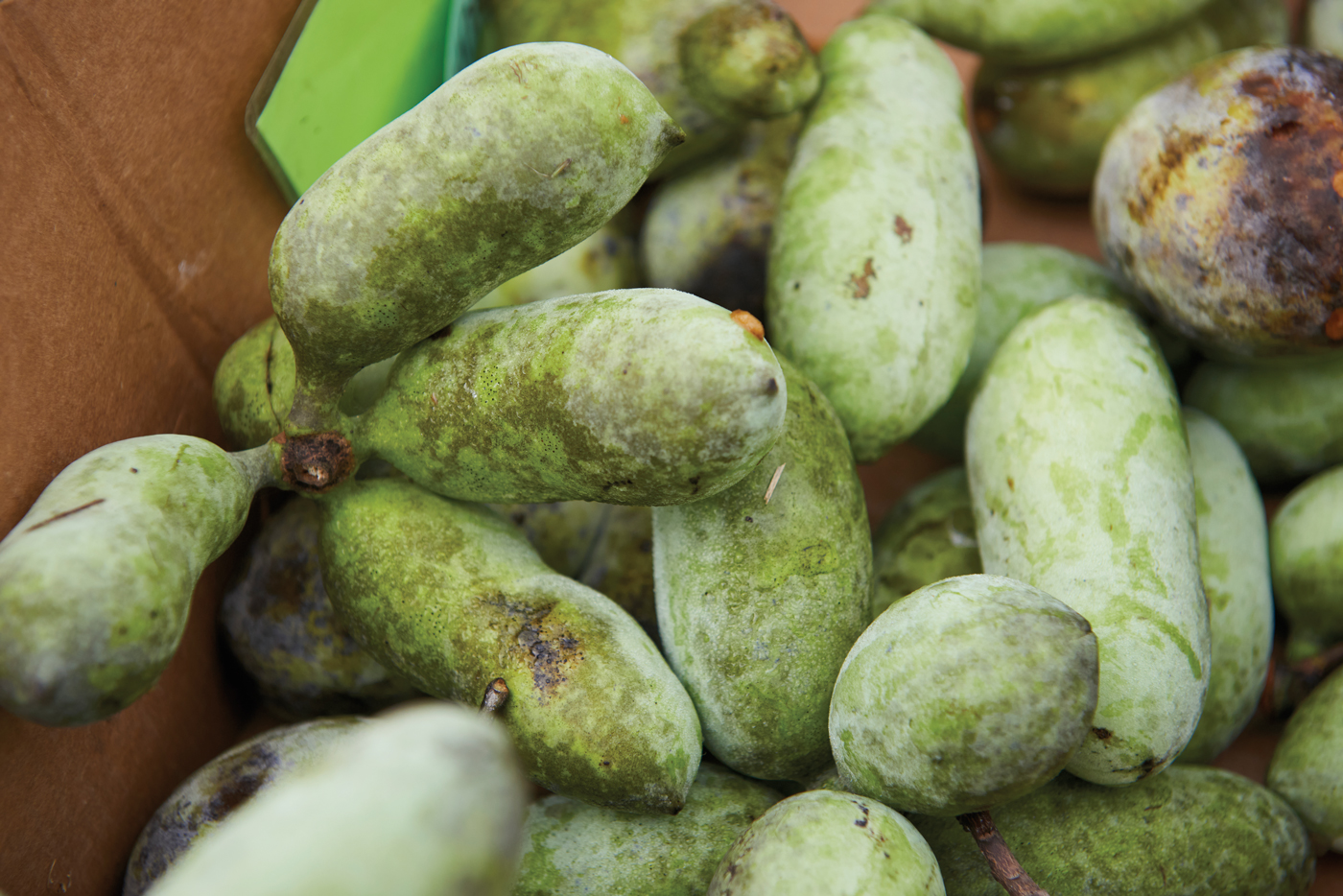 When fully ripe, the fruit’s flesh presents as yellow-orange to white in color; its consistency is comparable to soft-serve ice cream or mashed potatoes. If you enjoy eating bananas, pawpaws are quite similar. Pawpaws can be used to create chilled desserts such as smoothies and ice cream. They also bring flavor to pudding, preserves, butter and jam. They can be creatively used in cocktails, beer and mead. Flavor-wise they evoke notes of mango, banana and jackfruit. 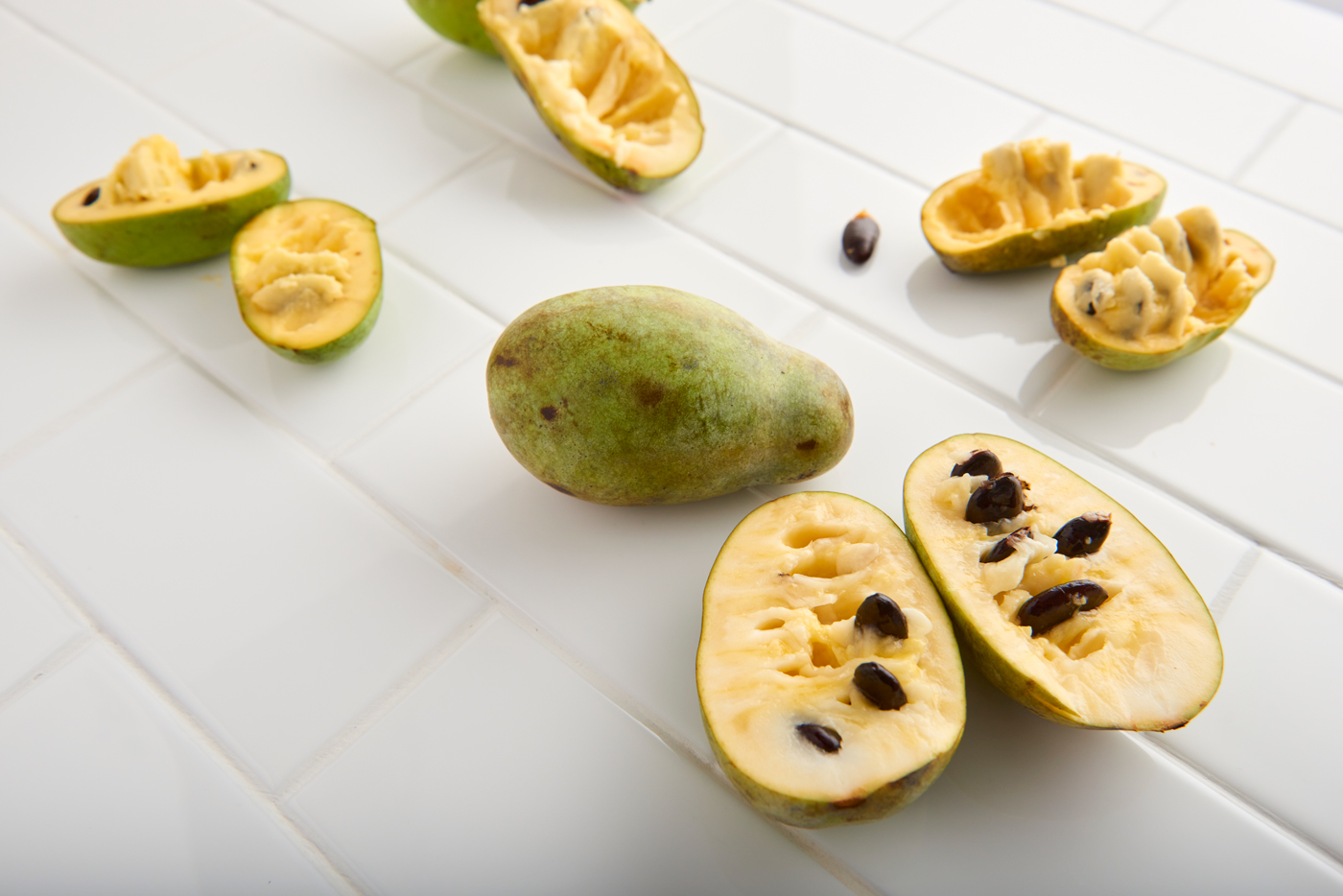 Jim Switzenberg, the director of operations and executive chef at the John Wright Restaurant, planted a few trees five years ago. The trees are now bearing fruit, which Jim plans to incorporate into the restaurant’s fall menu. At Artifice Ales & Mead in Manheim, pawpaw mead is available in the fall.

Ripe pawpaws should feel soft and separate easily from the tree. The green skin color doesn’t provide for a reliable indicator of ripeness. If they’re harvested before they’ve achieved ripeness, pawpaws can last in the fridge for a few weeks. If they are fully ripe, soft pawpaws will keep in the fridge for about a week but are prone to bruising. Typically, commercially sold pawpaws are puréed and shipped frozen. Fair warning: due to its limited commercial availability, pawpaw purée is expensive, ranging between $10 and $20 a pound. 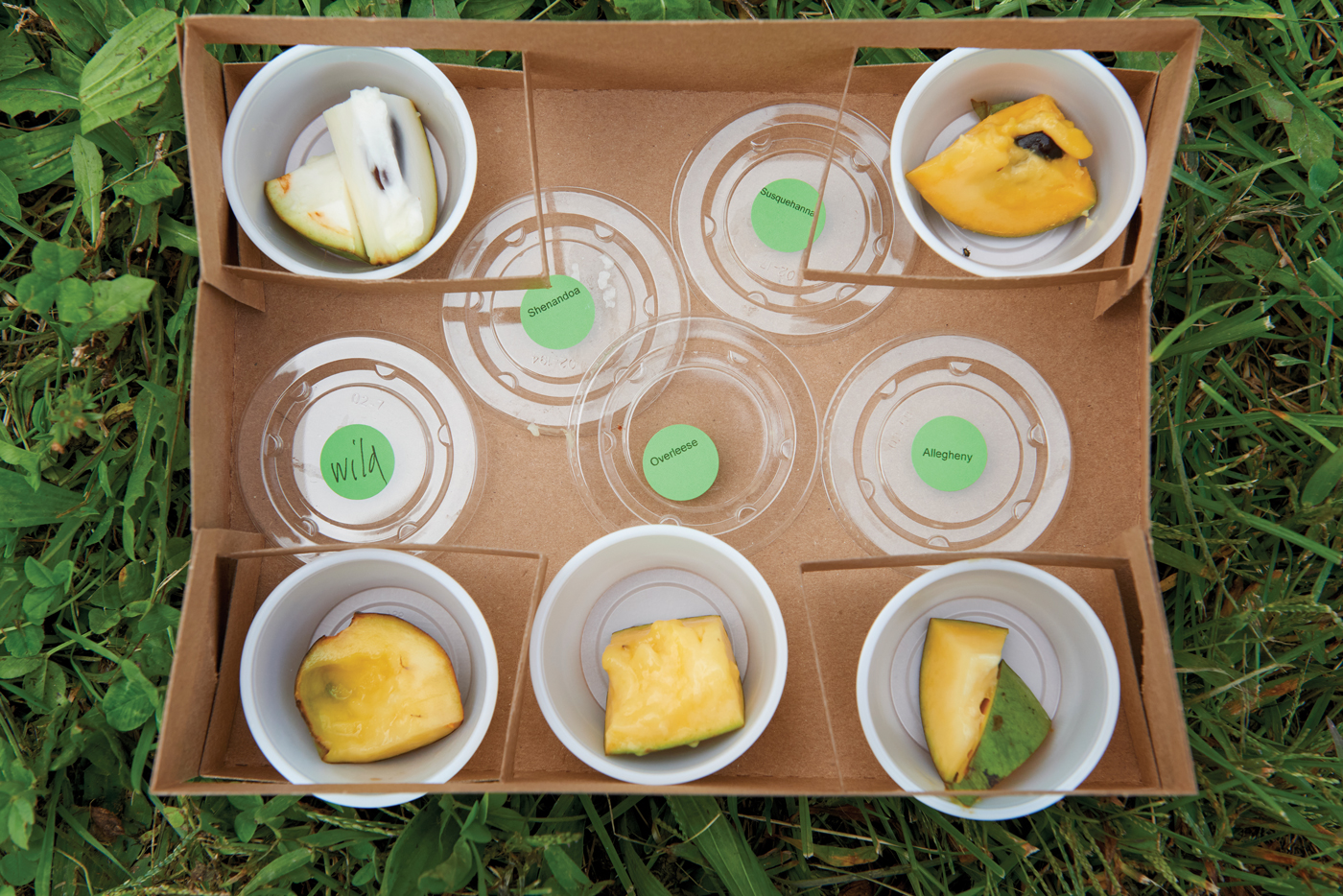 I’ve had wild pawpaws that were not nearly as delicious as a ripe, cultivated, nursery-grown pawpaw. For this reason, I’d encourage you to source cultivated varieties from a nursery.

Perhaps more importantly, as with any foraged food, over-foraging an area can be detrimental. For example, pawpaws are known to grow wild along the Susquehanna River; when that information became known a few years ago, the local foraging community was devastated by the over-foraging that resulted. If you forage for pawpaws, be considerate of others looking to enjoy the fruit. Don’t get greedy.

Pawpaws are also good for you from a health standpoint. According to the Kentucky State University Extension’s bulletin, Cooking with Pawpaws, written by Snake C. Jones and Desmond R. Layne, “Pawpaws are very nutritious fruits. They are high in vitamin C, magnesium, iron, copper and manganese. They are a good source of potassium and several essential amino acids. They also contain significant amounts of riboflavin, niacin, calcium, phosphorus and zinc.” The bulletin goes on to say that such nutrients generally equate to the same amount (or greater) as those that are found in bananas, apples or oranges. 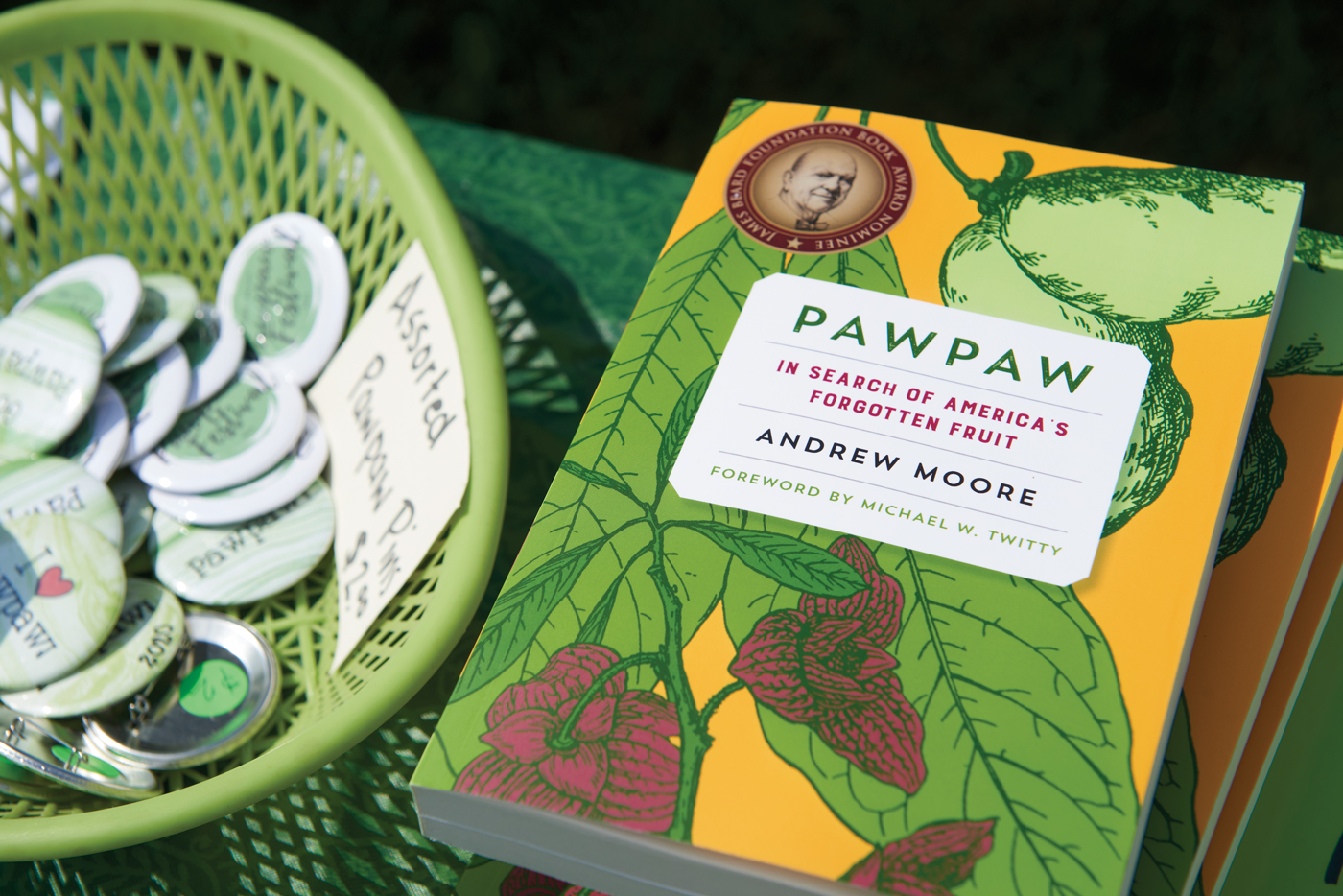 According to Andrew Moore, the author of Pawpaw, “Unlike so many fruit trees, pawpaws are virtually unaffected by pests and are easily grown organically. Native-plant and butterfly gardeners appreciate the tree both as a larval host and for its important niche in forest ecosystems. And because pawpaws are highly nutritious, they’re gaining the interest of health-conscious eaters.”

If you’re interested in learning more about pawpaws, the Horn Farm Center for Agricultural Education will be holding its 18th-annual festival September 24 and 25. Located just across the Susquehanna River along Route 30, the farm center is home to an established pawpaw orchard, as well as wild pawpaw trees that grow on the property. The event is extremely popular; I’d recommend attending early in the day (hours are 10 a.m.-3 p.m.) before lines get long and specialty items, such as frozen pawpaw push-pops, sell out. 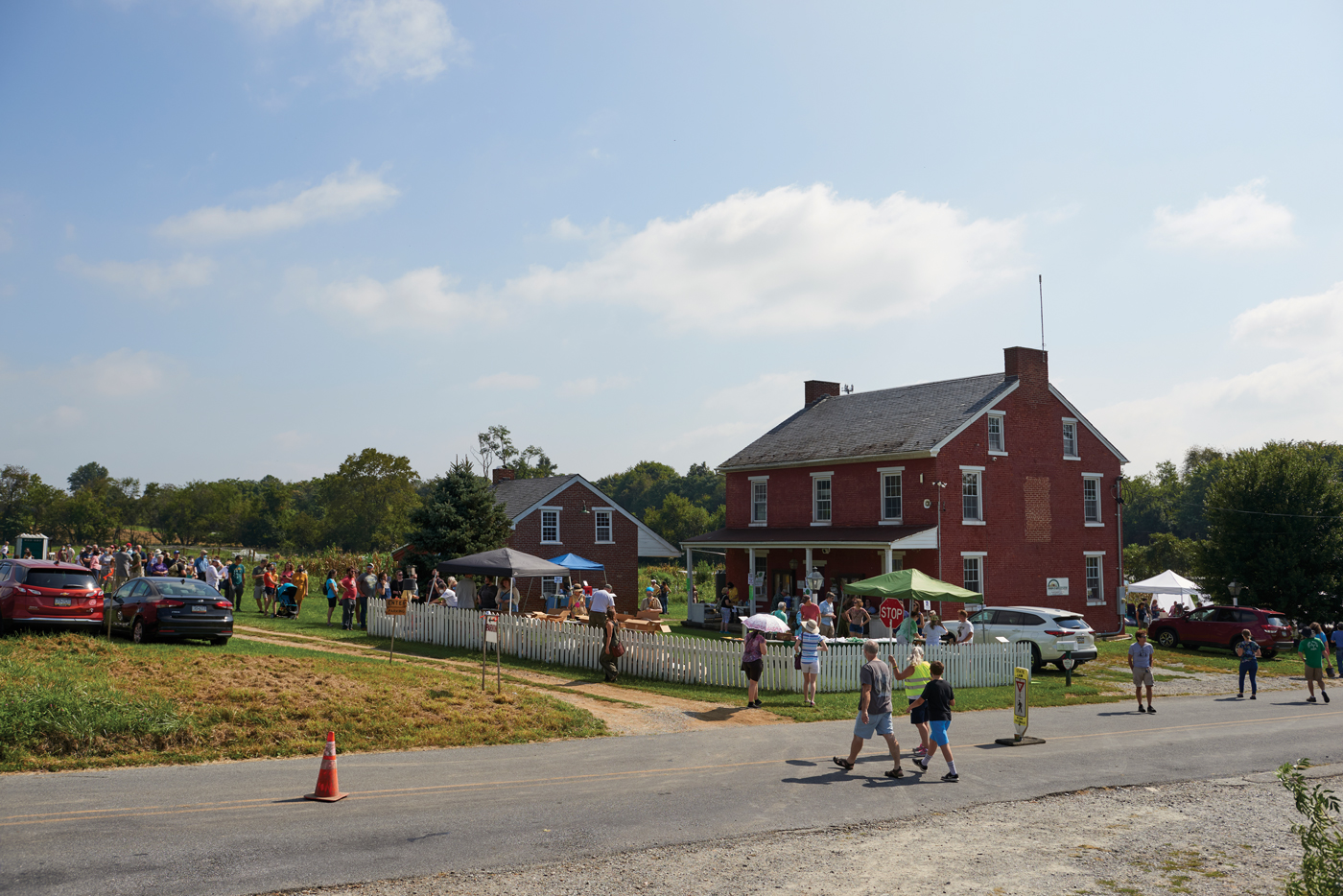 The 2022 Pawpaw Festival will be held September 24-25 at the Horn Farm Center in York County. If you’re looking for an excuse to take a late summer/early fall getaway, pawpaw festivals are held up and down the East Coast. Heppy.org maintains a listing of such festivals.

This year, pawpaw fruit (both wild and cultivated varieties) and trees will be available for purchase. Other pawpaw-related items will be available, as well. In addition, the festival will feature local food vendors, artisans and community organizations. Fresh produce from the Horn Farm Center, as well as native plants, jams, jellies, honey and more will be for sale. Visitors will also enjoy tours of the farm and pawpaw orchard.

As the festival serves as a fundraiser, a $5 donation is requested upon entry. All proceeds will support local regenerative agriculture practices and education programs at the Horn Farm Center.

For the Love of Pawpaws: A Mini Manual for Growing and Caring for Pawpaws, from Seed to Table by Michael Judd. 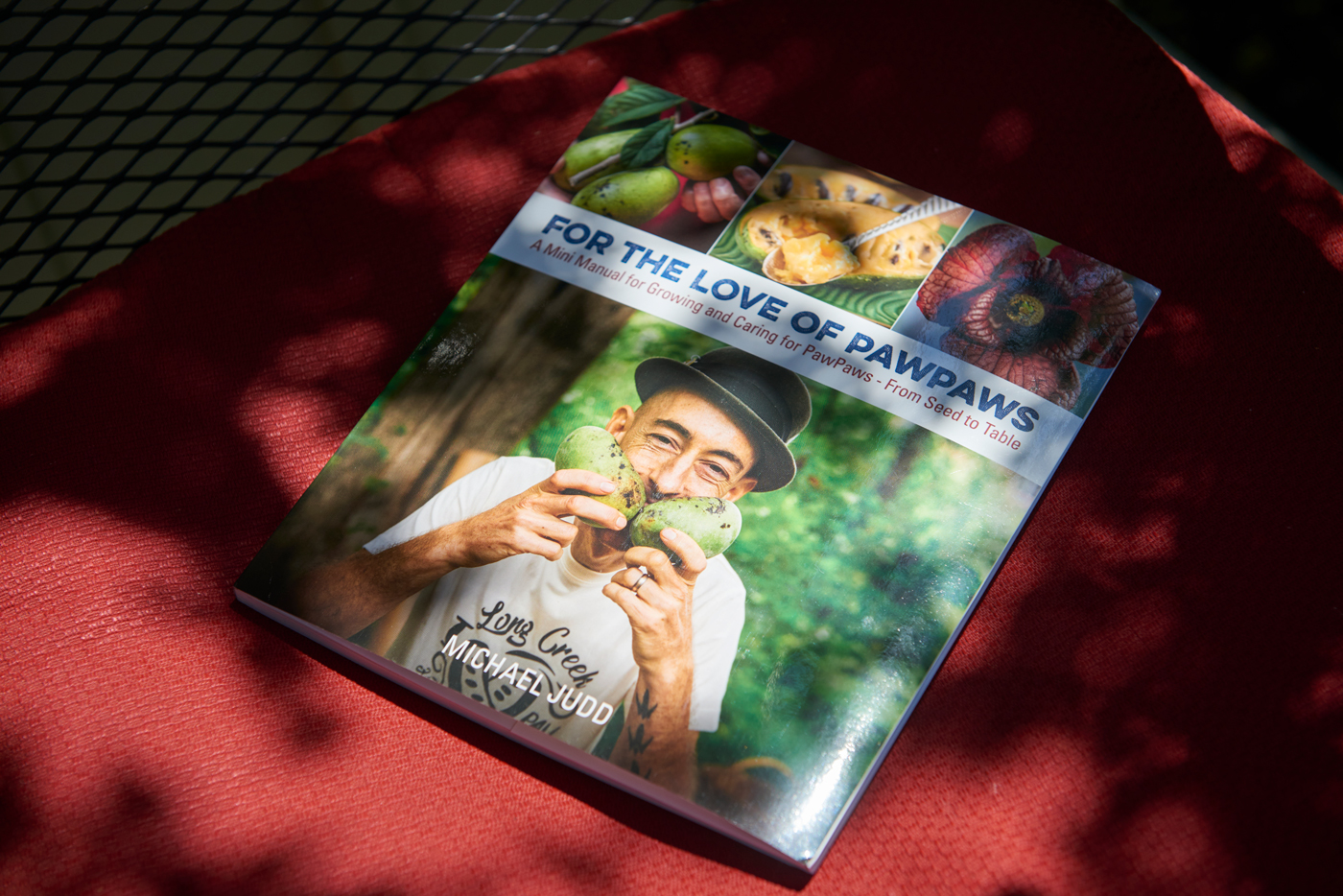 Pawpaw fruit growing on trees planted at the John Wright Restaurant in Wrightsville.