Mild winters have been prompting honey bees to make an early appearance in our landscapes. When you’re adding new plants to your landscape this fall, be sure to include some nectar/pollen sources for the early-arriving honey bees. 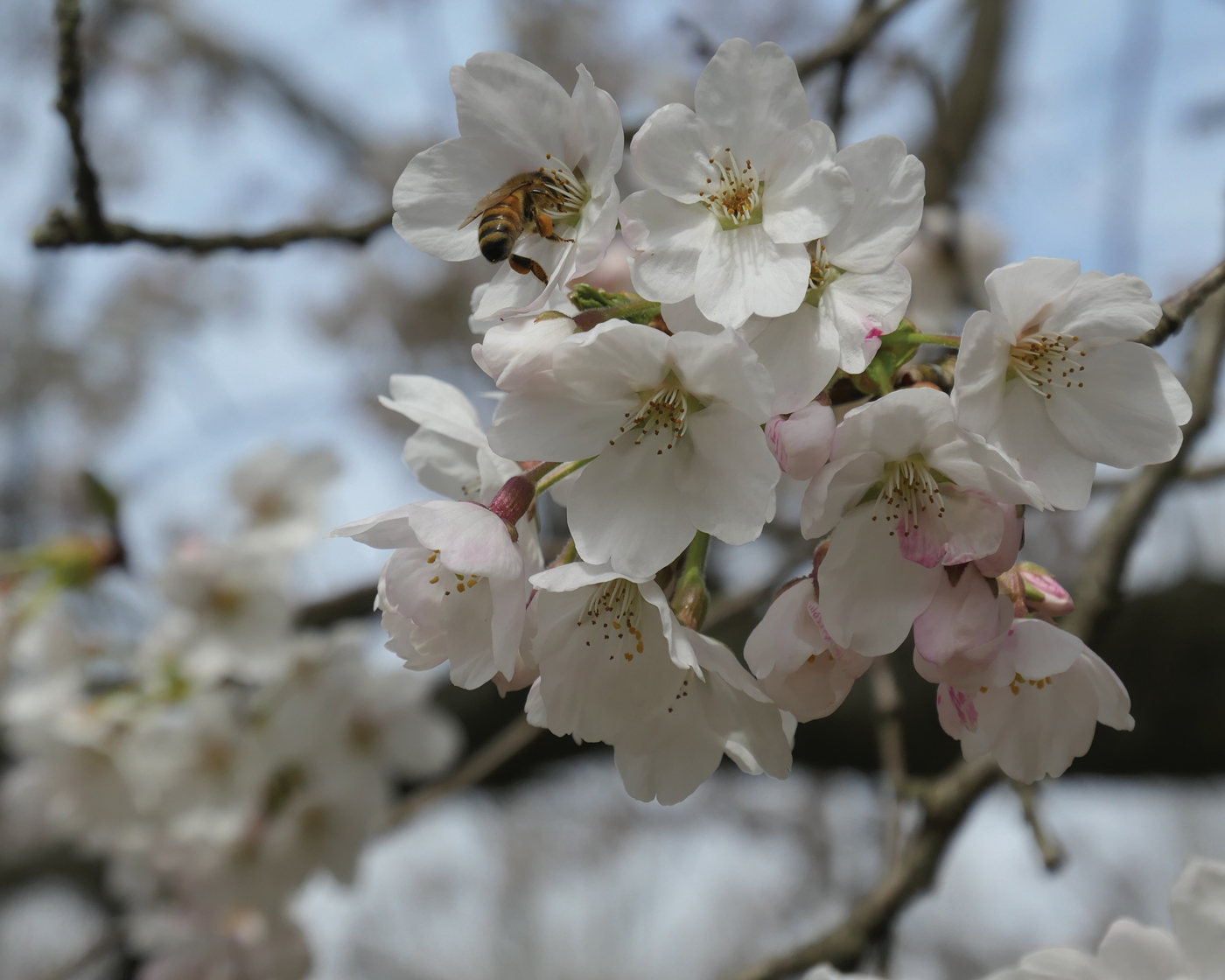 Honey bees (Apis mellifera) are struggling. Their numbers have been declining for decades. Several factors are responsible: fatal viruses (sound familiar?) carried by mites, pesticides, habitat loss from urban development (culture of the perfect green lawn is of no help to honey bees, either) and lack of plant diversity. In recent years almost half of the managed beehives in the U.S. have died. One recent report said that beekeepers have collectively lost 10 million hives.

Bees visit flowers to find food in the form of nectar or pollen. Pollen is a fine powder produced by male flower parts to ensure the next generation of plants, as it contains protein, fat and other nutrients that pollinators require. Nectar is the sweet substance composed of sugars, vitamins, salts, oils and nutrients that provides pollinators with energy. At least one-third of the world’s food crops and 90% of all plants require cross-pollination to thrive. As the honey bees make their way around the garden collecting nectar, they carry grains of pollen on their very hairy bodies. Consider this: pollination is key in one out of every three bites of a healthy diet: nuts, berries, fruits and vegetables. Animals and birds depend on many of these plants for survival, as well.

Additionally, bees themselves are part of the food chain. Several dozen species of birds, including blackbirds and hummingbirds, will eat bees, as will spiders, dragonflies and praying mantises.

Bees cannot regulate their body temperature. When temperatures drop, they slow down and become less responsive. The perfect hive temperature is 95 degrees F (35 C). When the outside temperature drops to 55 degrees F (13 C), they can no longer fly. Bees are able to keep warm in the hive on cold winter days, clustered around their queen, but they will immediately start foraging again on any late winter days that see the temperature rise above 55 degrees in an effort to supplement their, by then, waning stores of honey. Keep in mind what the honey bees produce and store in their hives is for their own purpose – to feed their colony during the winter.

Experienced beekeepers will know how much honey they can harvest during the summer so that the bees will have time to generate adequate stores to make it through the cold, nectar-less winter. 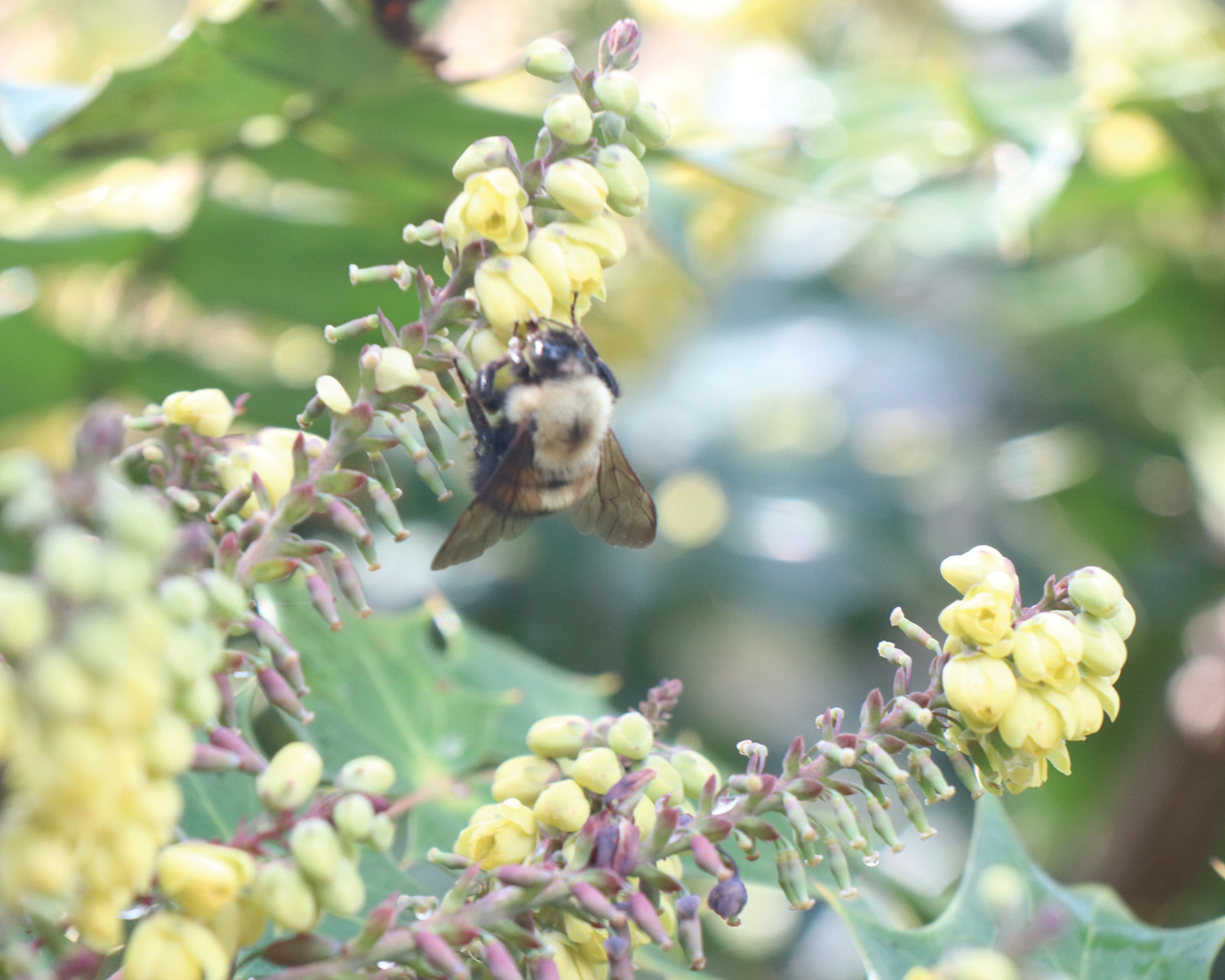 Global climate change has caused some flowers to bloom earlier or later than usual. As a result, honey bees have a problem finding nectar sources when it turns unusually warm in January (or when the spring season starts early). Overwintering loss rates have increased to 30%.

There are ways concerned Lancaster County gardeners can help the honey bee population. One way is to cultivate plants that flower in late winter and very early spring. While the earliest flowers are from bulbs, there are also some early-flowering shrubs available.

Bulbs and other Plants

What follows are four foolproof, early-flowering bulbs that can be planted now, before the ground freezes. Deer will not touch any of them and they should do fine under a walnut tree. All go dormant by late spring and can be interplanted with other herbaceous plants. They can also be planted in turf, provided the grass is not mowed until the bulb foliage has matured completely. The depth of planting is determined by the size of the bulb and directions will come with your bulb order.

Consider planting near the kitchen window or garage where the flowers and their fragrance can be appreciated in late winter and you can watch for the first bees. All these bulbs should be left undisturbed once planted. 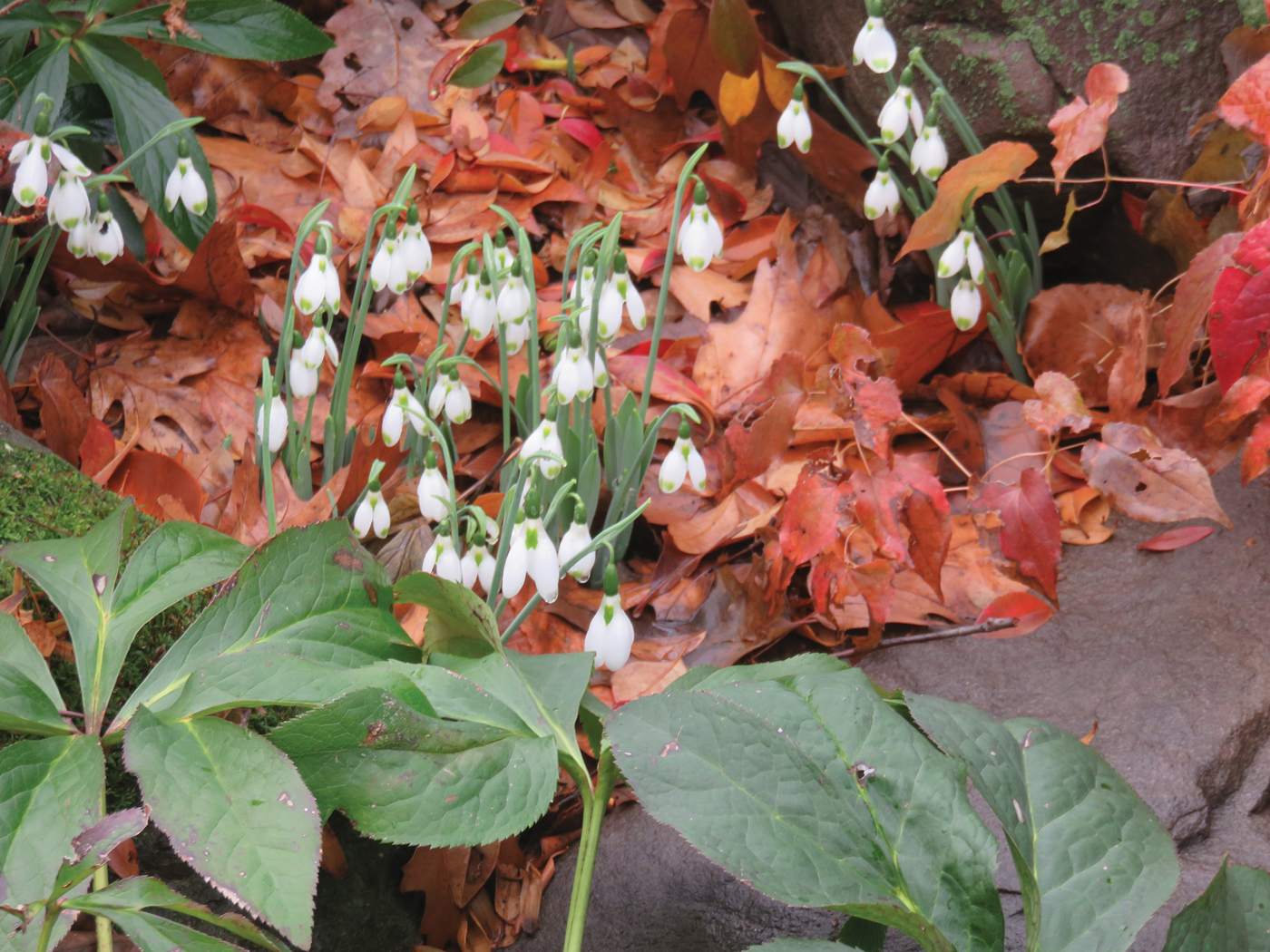 Snowdrops (Galanthus spp.) are great bee attractants. Their delicate-hanging, sweetly scented flowers bloom as early as December or January (as soon as the snow begins to melt). They provide an early vital food resource. These easy-to-grow bulbs will gradually naturalize in small sweeps. The snowdrops in my garden were planted in the 1980s! 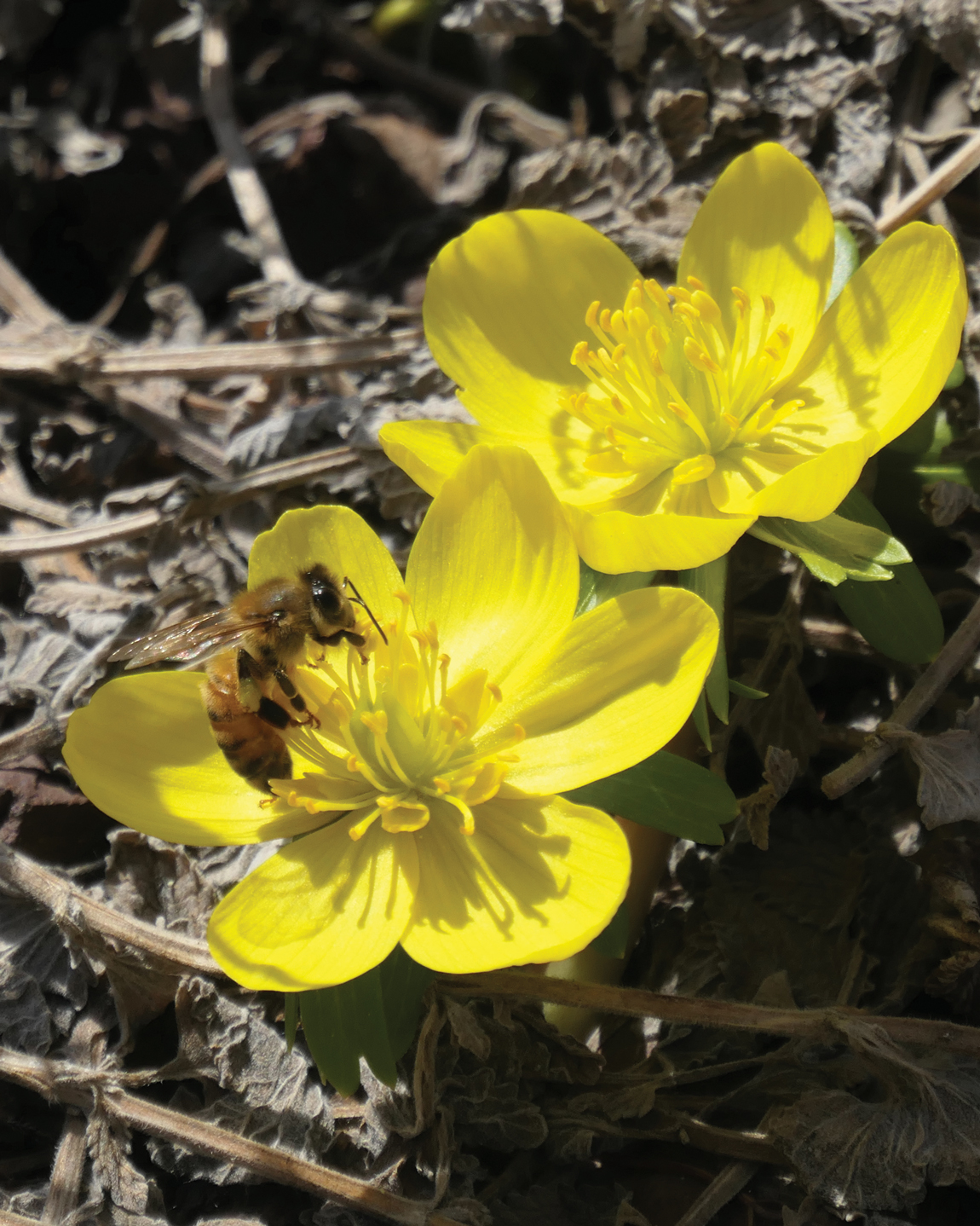 Winter aconite (Eranthis hyemalis) is the second rugged flower to emerge in my garden. The upward-facing, cup-shaped, bright-yellow buttercup-like flowers will pop up seemingly moments after the snow melts in a sunny spot. The basal green leaves emerge after the flowers and before long the plants go dormant. It naturalizes by seeds over time. 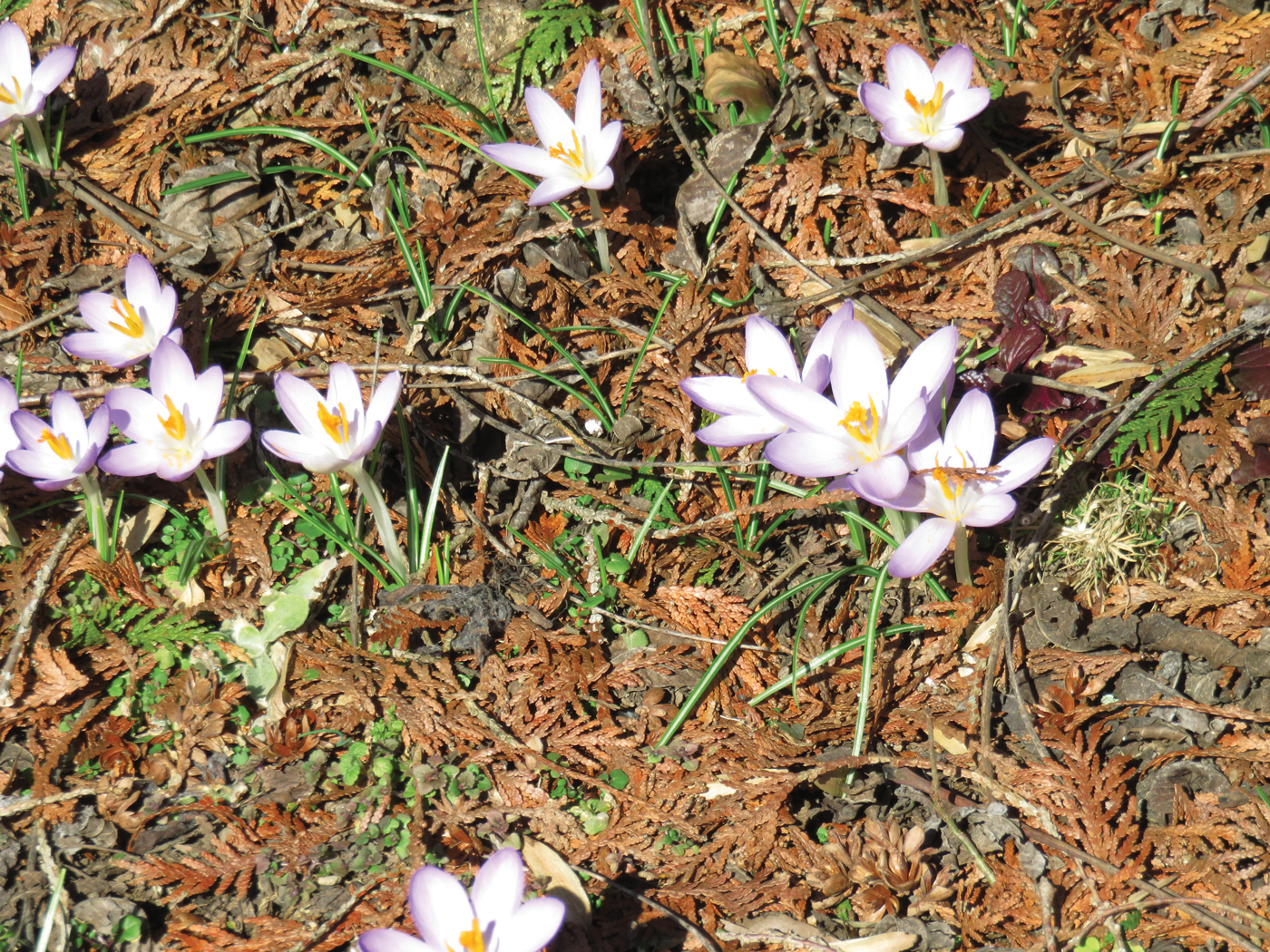 Crocus (Crocus spp.) will also turn up as soon as the snow melts. The bees love them! I grow only one species, the “tommies” (C. tommasinianus). They are dazzling with their pale-lavender flowers and striking silver stems. Squirrels do not dig them up. Really! You can trust me on that. And, they seed around. Plant dozens of the bulbs now before the ground freezes and each year you will have an expanding display. 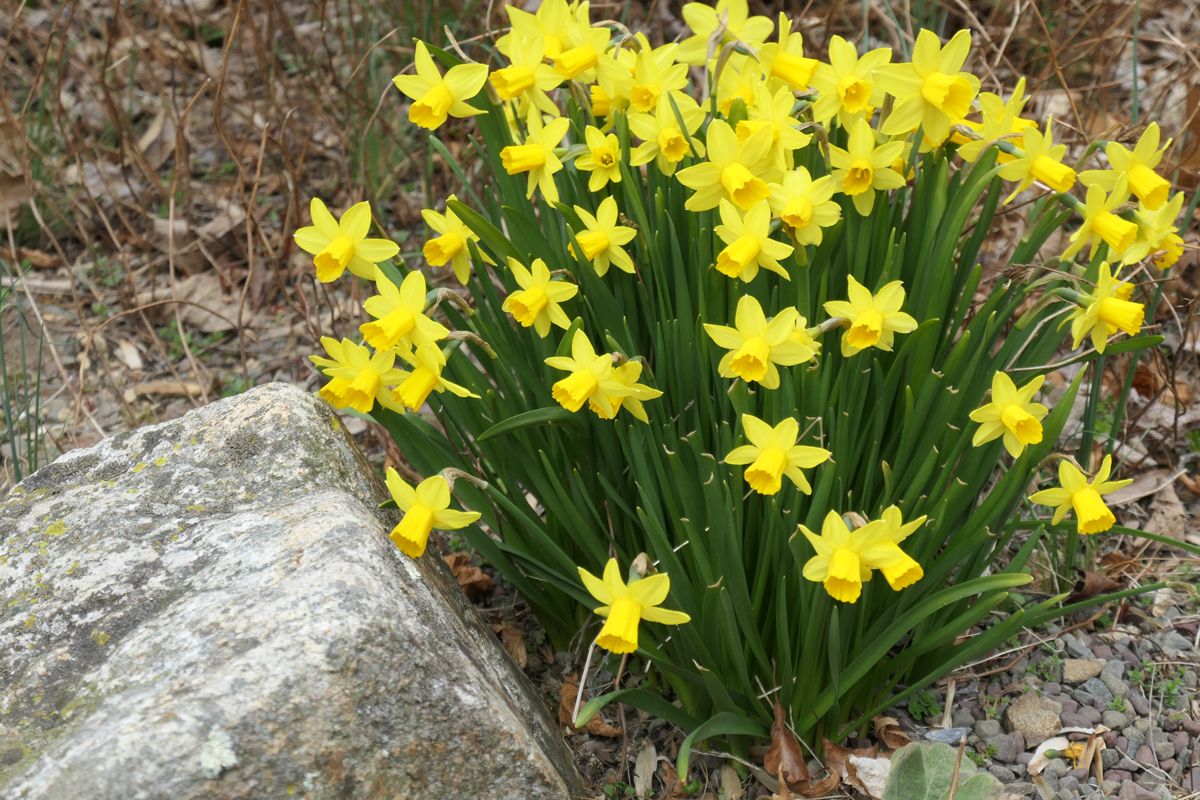 Daffodils (Narcissus hybrids) are the mainstay of an early spring garden. They are tough and long-lived provided they have good drainage. They are available not only in the familiar yellow, but also in white, orange, pink and bicolors. Give the bulbs some space because they will fill in over time. Cut off the spent flowers but do not cut back the foliage until it browns. Daffodil enthusiasts have organized the cultivars into complex divisions based on the blooms, but even the most common variety serves as an announcement that another gardening year has arrived. More importantly, daffodils provide a welcome nectar source for the honey bees.

A good source for daffodils is Brent & Becky’s Bulbs, which is based in the “Daffodil Capital,” Gloucester County, Virginia. In business since 1900, the 28-acre farm is owned by third-generation gardening enthusiasts, Brent and Becky Heath, who have spent the pandemic addressing garden clubs and horticultural organizations across the world via Zoom. Originally specializing solely in daffodils, the company now offers a wide selection of bulbs, annuals, perennials, tropicals and more.

Education has also become part of the farm: eight acres are devoted to gardens that educate visitors about sustainable and chemical-free growing methods. As the farm is located amid Virginia’s waterways (including the Chesapeake Bay), the Heaths are passionate about sharing their knowledge with visitors. The farm hosts regular events such as monthly garden walks and seminars/workshops conducted by master gardeners. They also celebrate National Honey Bee Day (in August) every year. For more information, visit brentandbeckysbulbs.com.

Also of interest is the Gloucester Daffodil Festival that is held in late March/early April. The festival includes such activities as a daffodil show, a parade, a best-dressed pet contest, vendors and a self-guided driving tour of garden displays. For more information, visit daffodilfestivalva.org. Note: Gloucester is a short drive away from Williamsburg, Yorktown and Virginia’s beaches, so make a weekend of it! 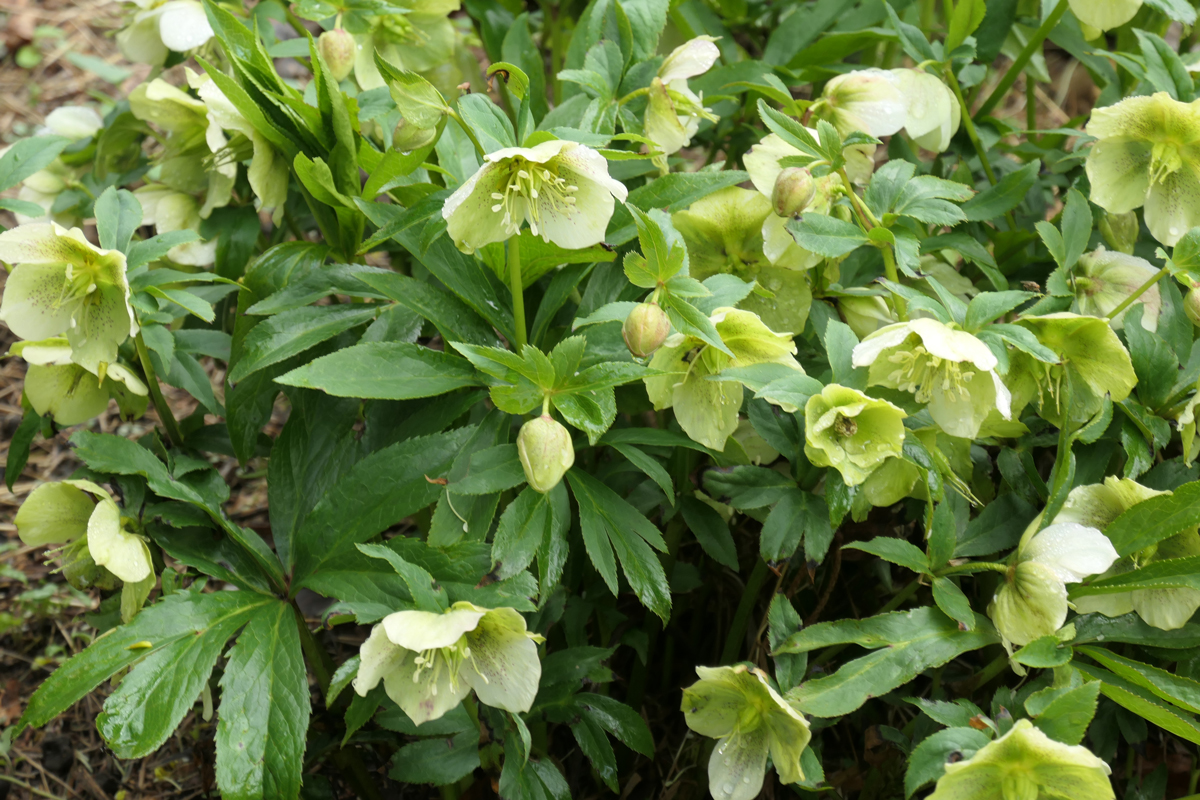 Readers of this column are probably aware of my fondness for Hellebores, often called Lenten Rose (Helleborus orientalis). There is everything to like about this plant. It’s semi-evergreen; deer won’t touch it; it flowers for more than a month in late winter and will self-seed if not mulched. The foliage remains attractive throughout the growing season and is very happy in partial shade. The flowers exhibit shades of white, but hybrids that produce dark colors are available. They will be covered with honey bees when temperatures climb above 55 degrees. 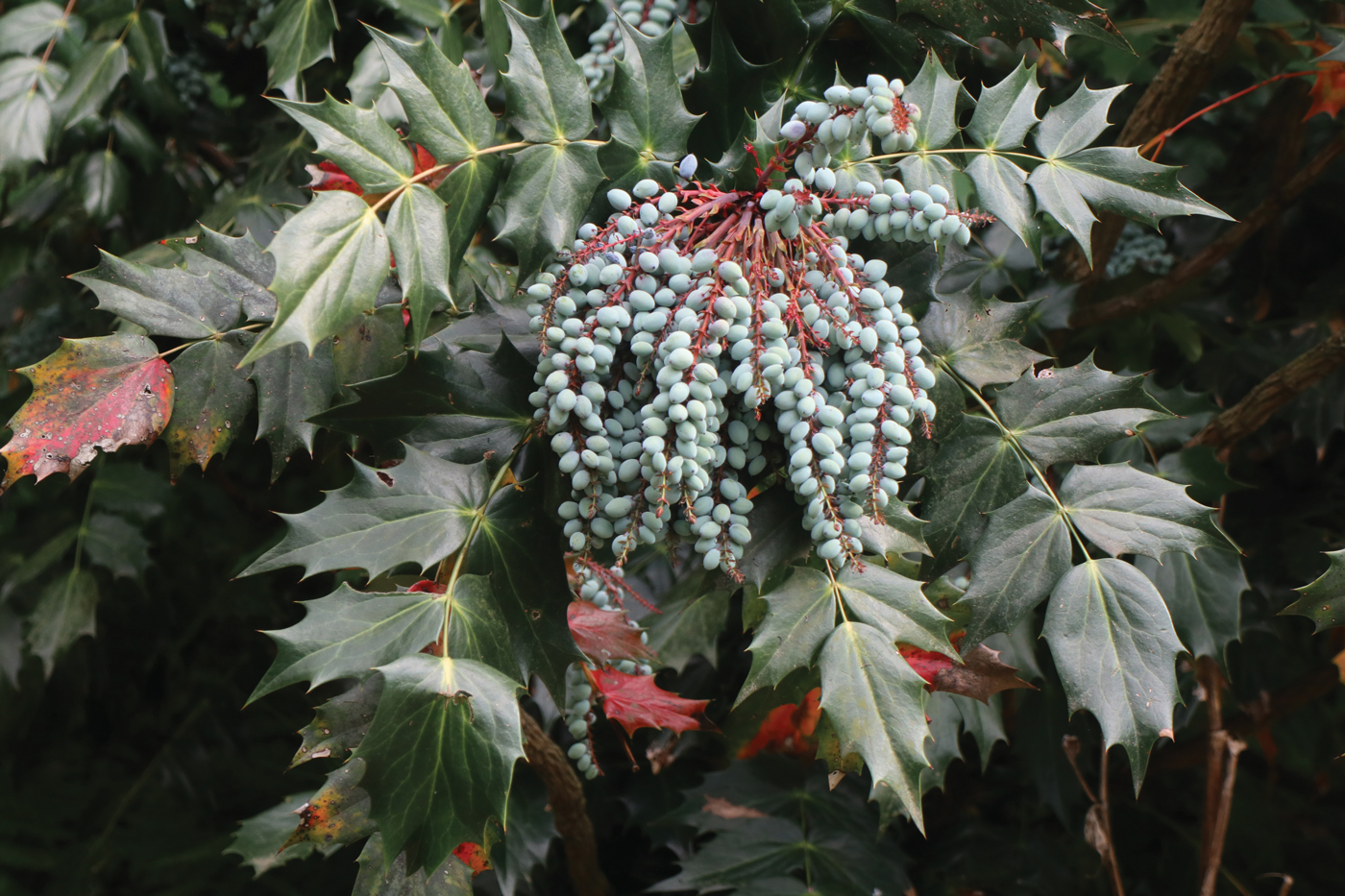 Leatherleaf Mahonia (Mahonia bealei) is usually the earliest-flowering evergreen shrub in this area. The pendent racemes of bold yellow flowers jump out against the shiny holly-like evergreen foliage, which is too spiny for deer to browse. The flowers are followed by grape-like clusters of green fruits maturing to blue that the birds will scarf up. Mahonia does very well in shade.

The earliest large shrub to flower is Winter Witch Hazel (Hamamelis x intermedia). The fragrant flowers appear as early as January or early February. Hybrids are available with yellow, orange or rusty-red flowers.

An easy-to-grow vining shrub that flowers on bare stems is Winter Jasmine (Jasminum nudiflorum). The vivid, bright-yellow flowers are displayed on bare green stems and the vine is best grown cascading over a tall stone wall. 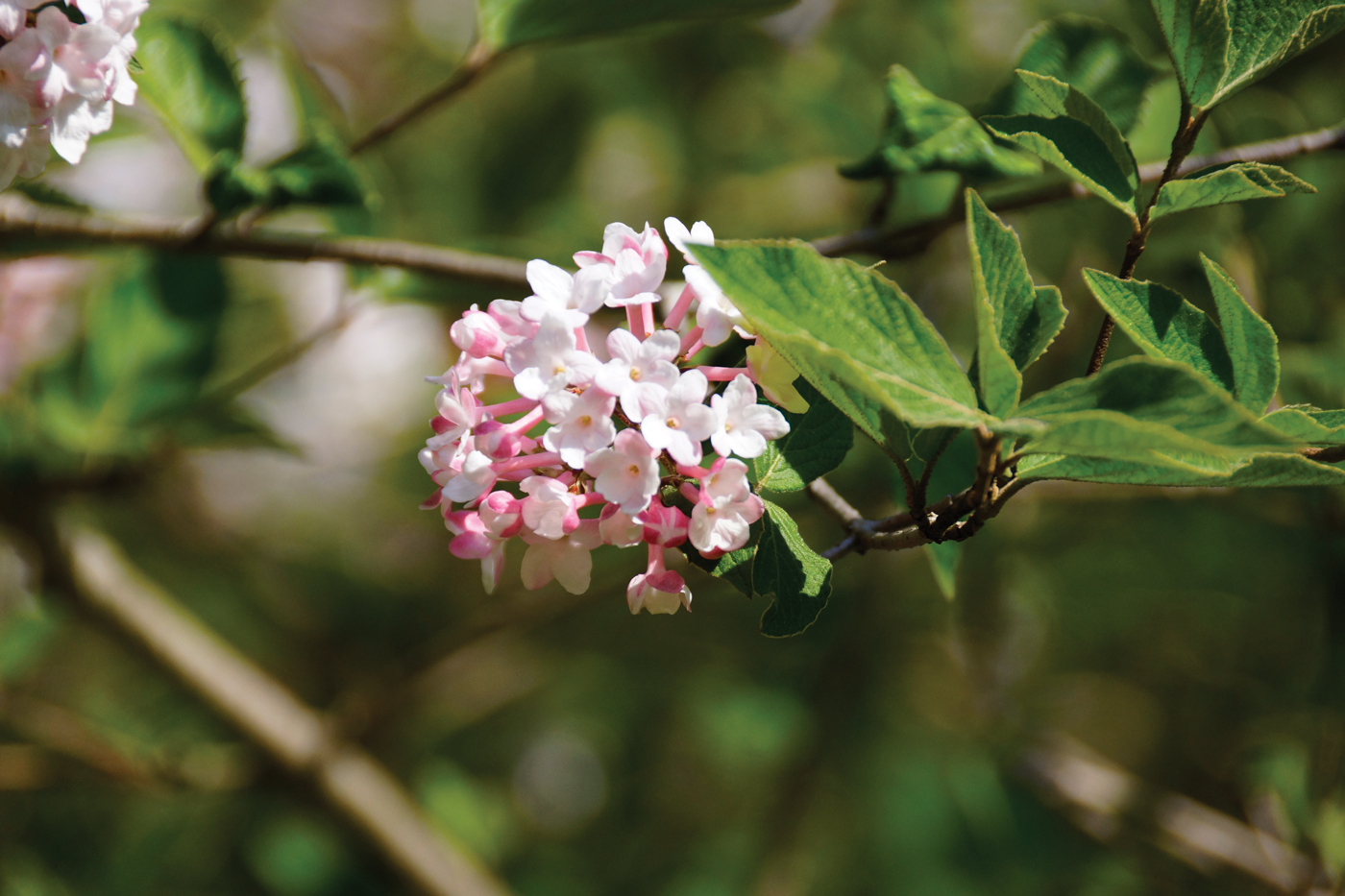 One of the earliest viburnums to flower is the Burkwood viburnum (Viburnum x burkwoodii). The intensely fragrant white flowers are irresistible to the gardener as well as the bees. 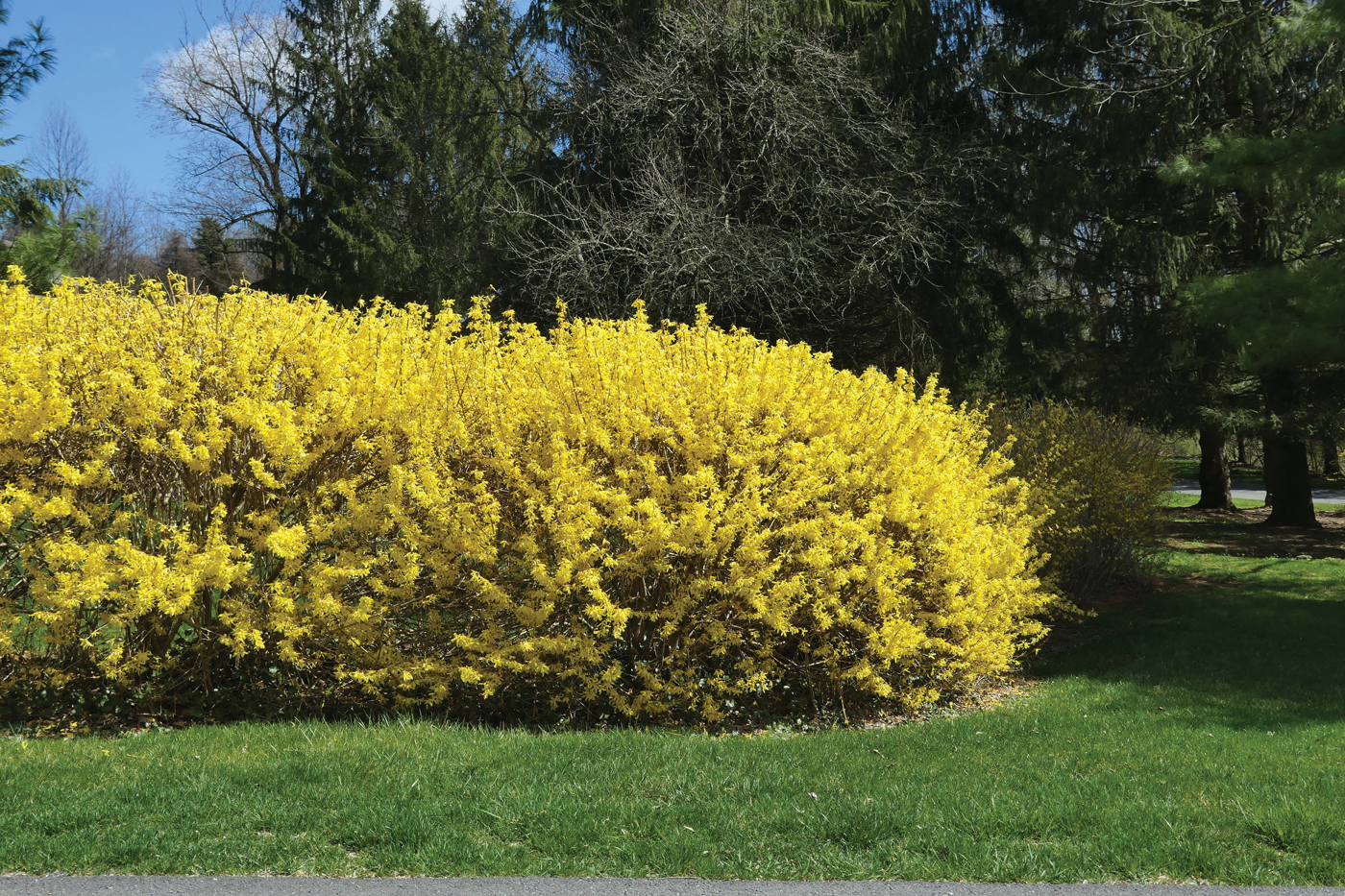 Of course another first bloomer is the omnipresent Forsythia (Forsythia x intermedia). I won’t give it a space (even in my large garden) because it has only two weeks of interest and the rest of the year it is just a twiggy tangle. The bees, however, love it.

Fall is a great time to plant trees 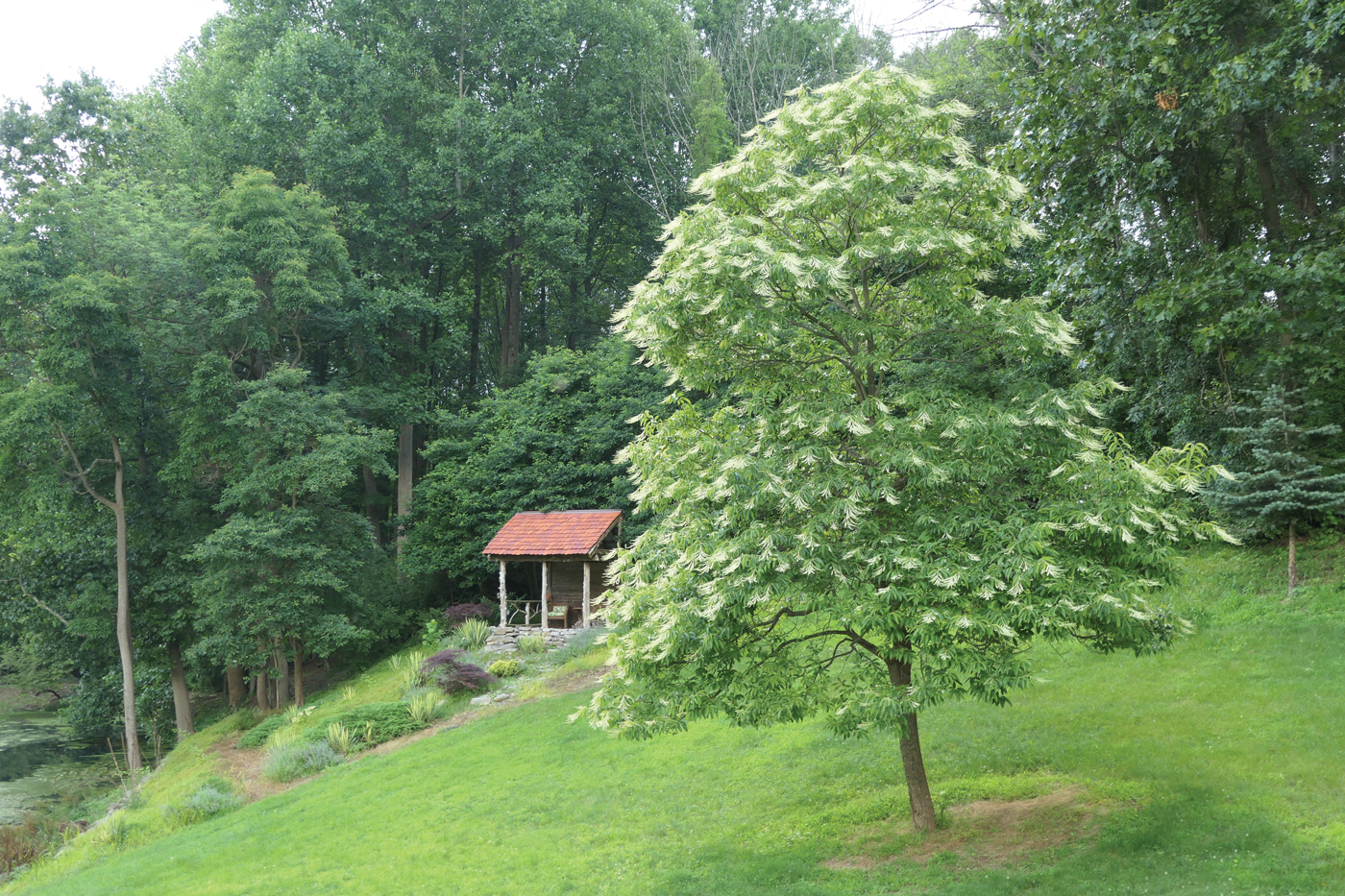 Actually, bees get most of their nectar from trees because they provide thousands of blossoms to feed on. The best tree choices for honey bees include: Willows (Salix sp.), Redbud (Cercis canadensis), Maples (Acer sp.), Serviceberry (Amelanchier), Crapemyrtle (Lagerstroemia sp.), Sweetgum (Liquidambar), Black tupelo (Nyssa sylvatica), Black locust (Robinia pseudoacacia), Sourwood (Oxydendrum arboreum), which is said to produce the finest honey, and Linden (Tilia sp.), which is a bee magnet! 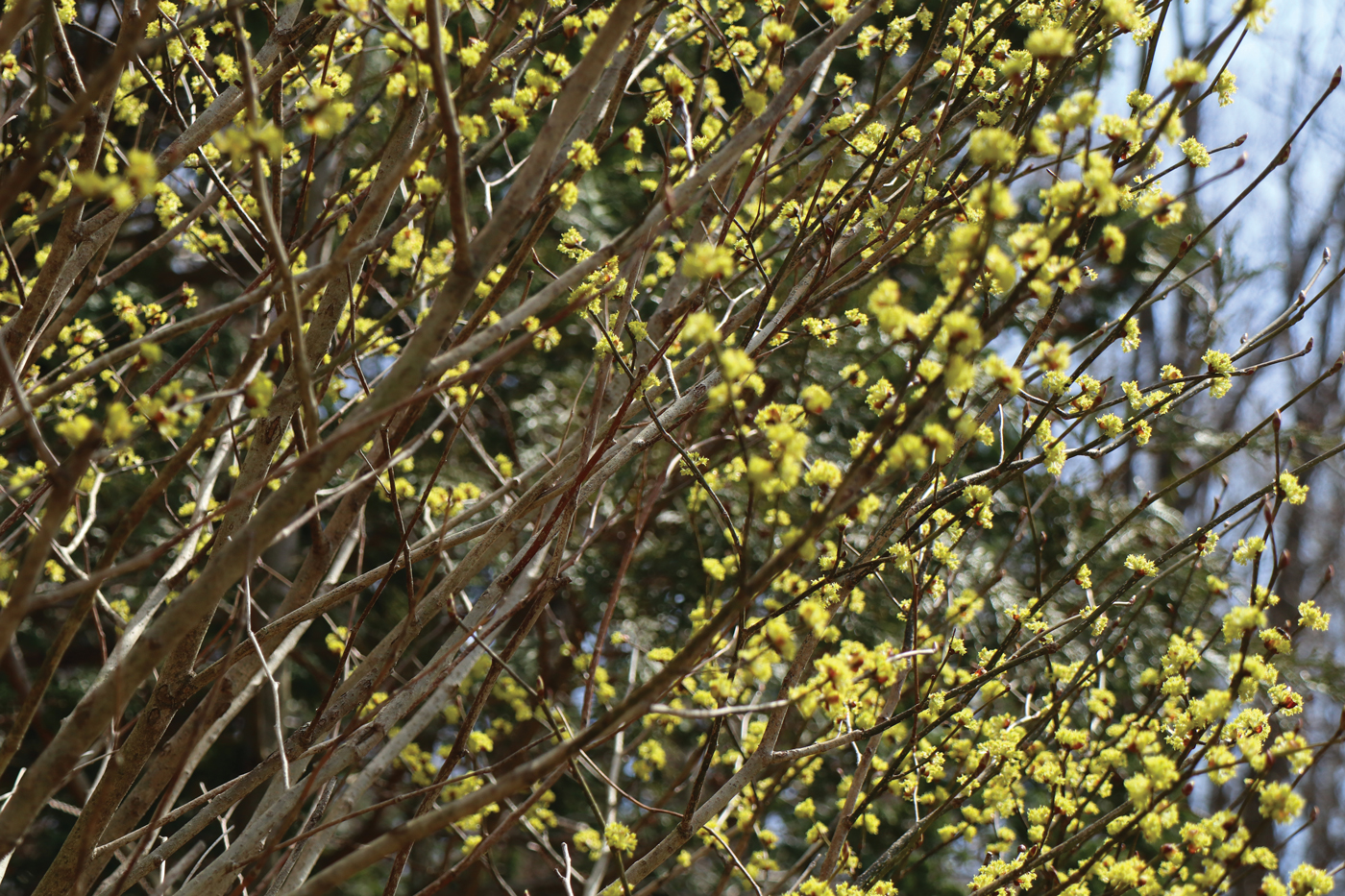 The first small tree to flower in this area is usually the Cornelian cherry (Cornus mas). The bloom time of the golden flowers is not the only reason to grow this dogwood. By summer it produces edible fruits that are relished by birds.