Rafe Hottenstein, who is the chef at The Greenfield Restaurant & Bar, knew just what he wanted in a kitchen: a sleek and modern design that cooks!

Whenever he gets the opportunity, Rafe likes nothing more than to cook for family and friends. “Now that the kitchen is done, I’m feeling a little more grounded,” he says. “When I first moved back here, it was a little crazy. I had been gone for 10 years, so being home took a little getting used to … for all of us,” he says, referring to his parents, Ray and Sue Hottenstein, and his sister, Kristen. “But, now that I’m settled, it’s definitely better,” he says, referring to both his professional and private lives.

After graduating from Penn State (hotel and restaurant management), Rafe wanted to expand his horizons and attend culinary school. The Culinary Institute of America at Greystone (Napa Valley) provided the perfect solution, as it offers an intensive course for students who hold related degrees. So, Rafe headed west and, after earning his credentials from the CIA, decided to stay, working in several highly regarded restaurants and embracing the wine-and-food culture of Napa and San Francisco. He also gained an appreciation for California’s farming tradition.

As much as he loved the West, Rafe missed the East. Now he’s merging California-style cuisine with Lancaster County goodness through establishing relationships with local farmers who provide the Greenfield’s kitchen with items that truly embody the farm-to-table concept. “I’m still trying to figure out who has the best produce,” Rafe says of the bounty that comes from California versus Lancaster County. He’s come to the conclusion that you can’t compare the two. “They’re both in a class all their own,” he says. “The only edge California may have is the length of the growing season. And, I’m still trying to find someone around here who grows artichokes,” he jokes. But then again, he couldn’t find Washington Boro tomatoes in California! He’s even growing things in a plot that’s located on the grounds of the restaurant. “We’re growing tomatoes, herbs, garnishes and Swiss chard,” he reports.

He’s also able to “visit” California through the wine dinners the Greenfield hosts. “I love collaborating on the menu with Kristen [who oversees the restaurant’s wine program] and the winery that’s being featured,” he says.

While most people begin the process of designing a kitchen with the cabinetry, Rafe started with appliances, specifically a Thermador gas/convection stove. “And it had to have a stainless backsplash,” he says of his quest to recreate a mini-sized commercial kitchen in his home. In his estimation, a great stove must be accompanied by an equally good dishwasher and refrigerator. “I had a limited amount of space to work with,” he says of the approximate 16×16 square-foot space. “So, I did a lot of research.”

Cabinetry was the next thing on his to-do list and one day, while he and his father were running errands, they decided to stop at Lowe’s and check out the selection. Rafe was impressed, realizing he would be able to get a custom look without taking that route. High ceilings make the room seem bigger than it is, and Rafe took advantage of that feature by running off-white cabinets nearly to the ceiling in order to gain optimum storage space. Several of the cabinets are fronted with glass, which also helps to “expand” the room. The lower cabinets are painted black. Open shelves provide for storage/display without taking up any real estate.

An L-shaped configuration of cabinets on the opposite wall multitasks by providing storage and a nook for the microwave, as well as ample counter space for prepping or displaying food. “People will come into the kitchen and hang out while I’m cooking, so it’s a great place to set up a bar and hors d’oeuvres,” he says.  Appropriately, the walls are painted a hue that mimics red wine; a section was overpainted with black chalkboard paint, which allows Rafe to display the evening’s menu for his guests.

The kitchen’s monochromatic color scheme continues with the backsplash (a combination of metal, ceramic and glass tiles) and the counters, which were crafted from concrete. “I just like the industrial/commercial look they deliver,” he says.

Because the kitchen is a separate entity from the dining room, Rafe likes to treat his guests to what he calls “communal dining.” Such a strategy allows him to join the party and not be stuck in the kitchen. For such dinners, he typically prepares items that can be prepped well ahead of time and popped into the oven or given a quick stir as guests arrive. “Then, you just put it on the table, and everyone can help themselves,” he explains. 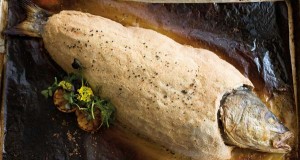 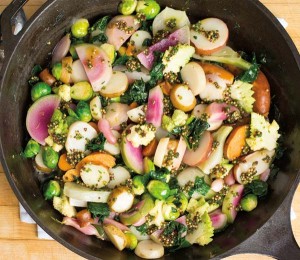 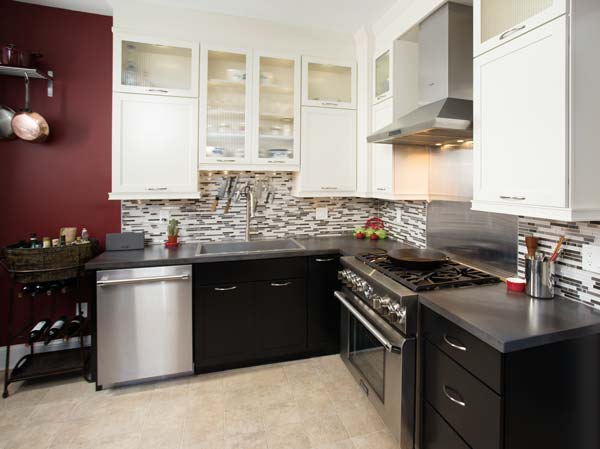