Dennis Denenberg’s garden truly serves as a reflection of where life has taken him. “Sometimes when I look around my acre of gardens, I say to myself, ‘What have I done?’” he admits. 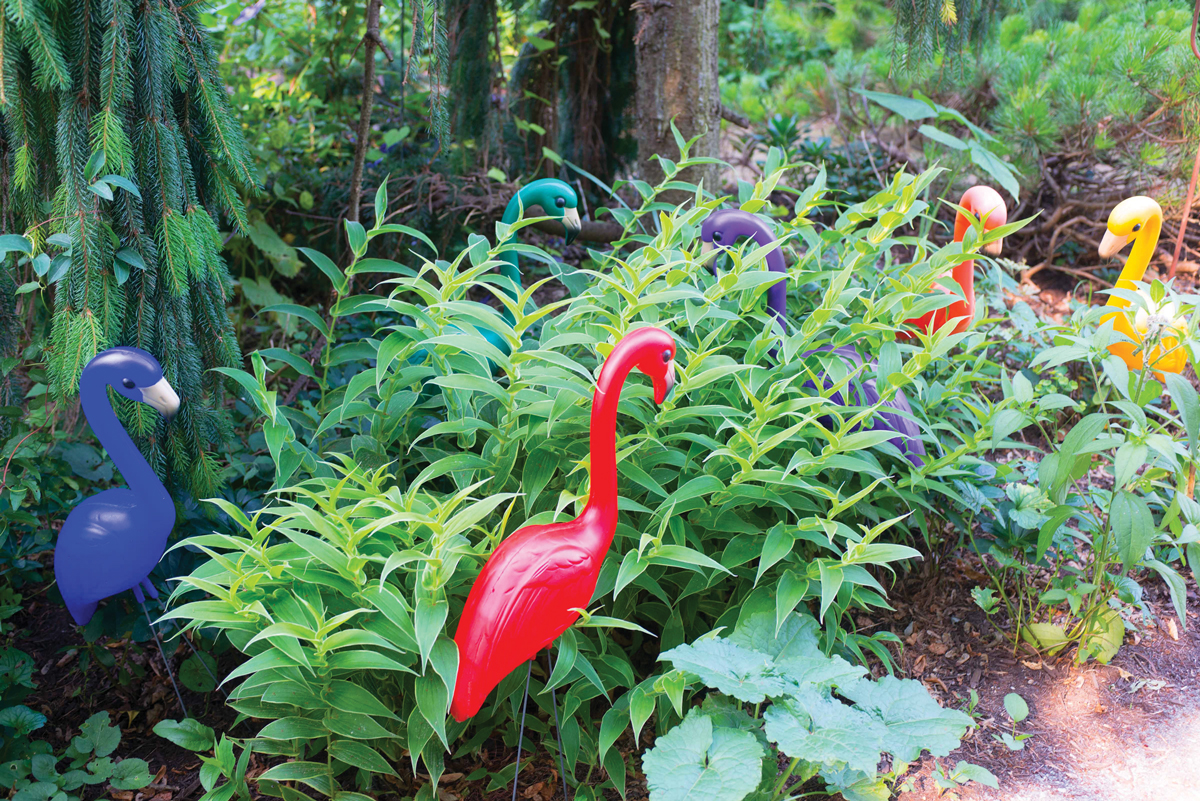 Next year, Dennis will have lived in his Manheim Township home for 25 years. “When I first moved in, there was nothing but grass,” he says of the acre of land on which his home is situated. “What really attracted me to the property was the protected wetlands that back up to it,” he explains.

His home and gardens have been a work in progress. “Your home should reflect who you are,” the retired educator philosophizes. In his opinion, that sentiment extends to outdoor spaces. “Your house and garden should function as a unified whole.” 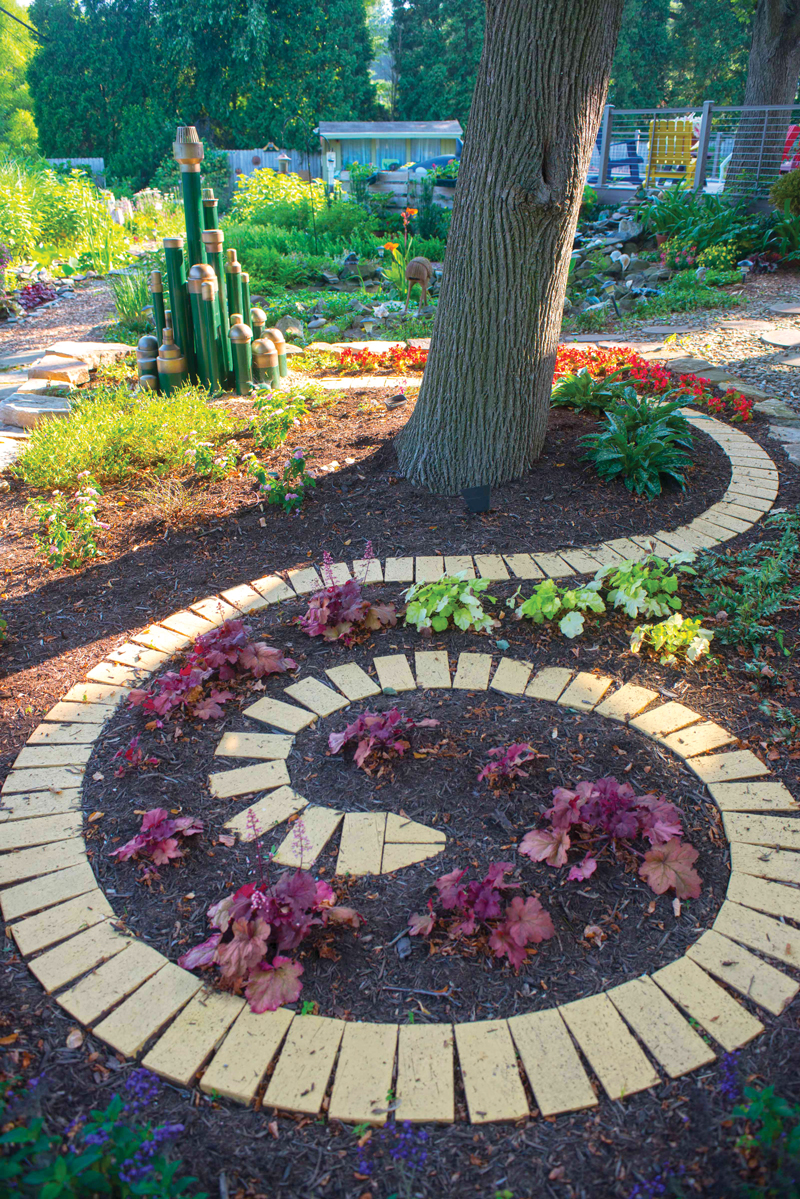 A yellow brick road leads to Emerald City, the elements of which were crafted from PVC pipes. This relatively new garden is filling in with perennials.

In Dennis’ case, both reflect his love of family, art, collecting, entertaining, travel, a little movie named The Wizard of Oz, and giving back to the community he so loves.

The family element is reflected in a garden on the property that honors his late sister, Diana Denenberg Durand, who was diagnosed with breast cancer at the age of 43. The garden radiates the color pink from spring through fall. Dennis, who writes about and presents seminars on the topic of heroes, says his sister, along with his parents, top his list of luminaries. “She was a model of courage,” he says of Diana, who was one of the first female math majors at Millersville University and went on to work for the CIA.

“She was an incredible fighter,” Dennis recalls. “She was an avid researcher and really did her homework about breast cancer.” 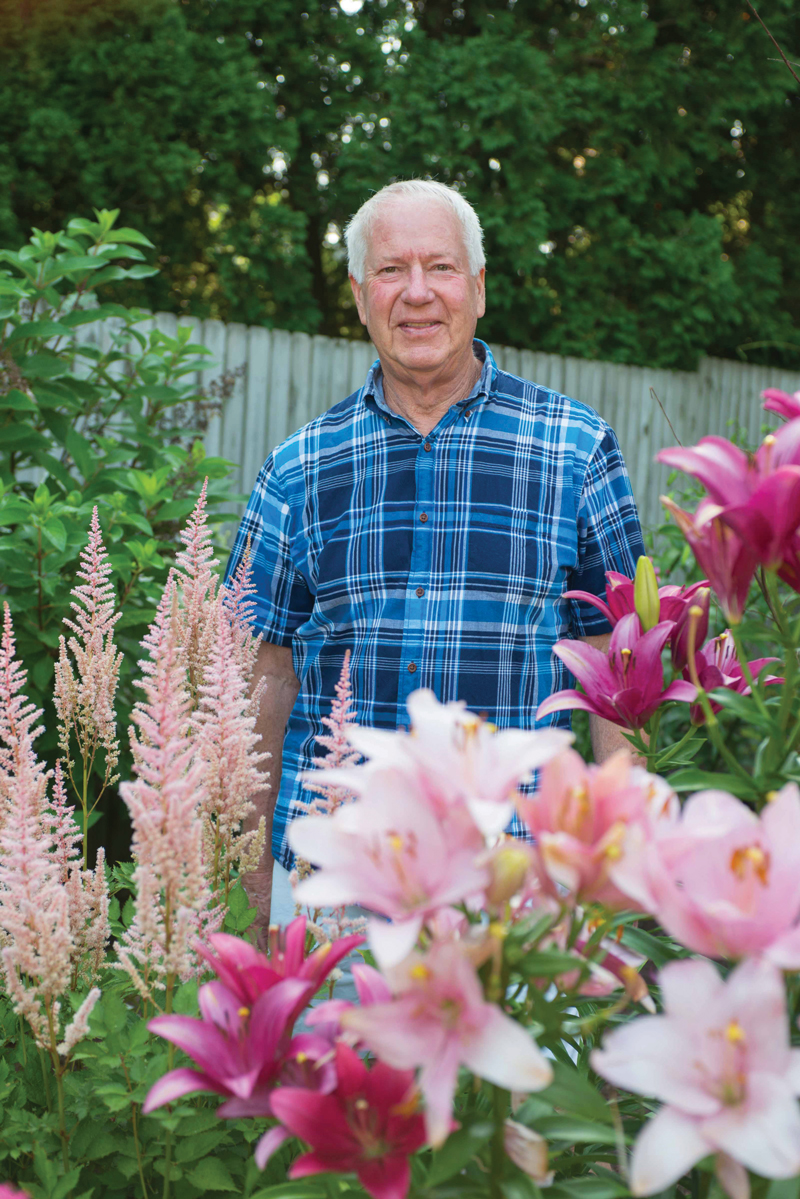 Soon after passing the five-year, cancer-free mark, doctors unfortunately discovered the disease in her other breast. Diana continued her battle, but over time the cancer metastasized to other parts of her body. Eighteen years after receiving her initial diagnosis, Diana passed away in 2007. 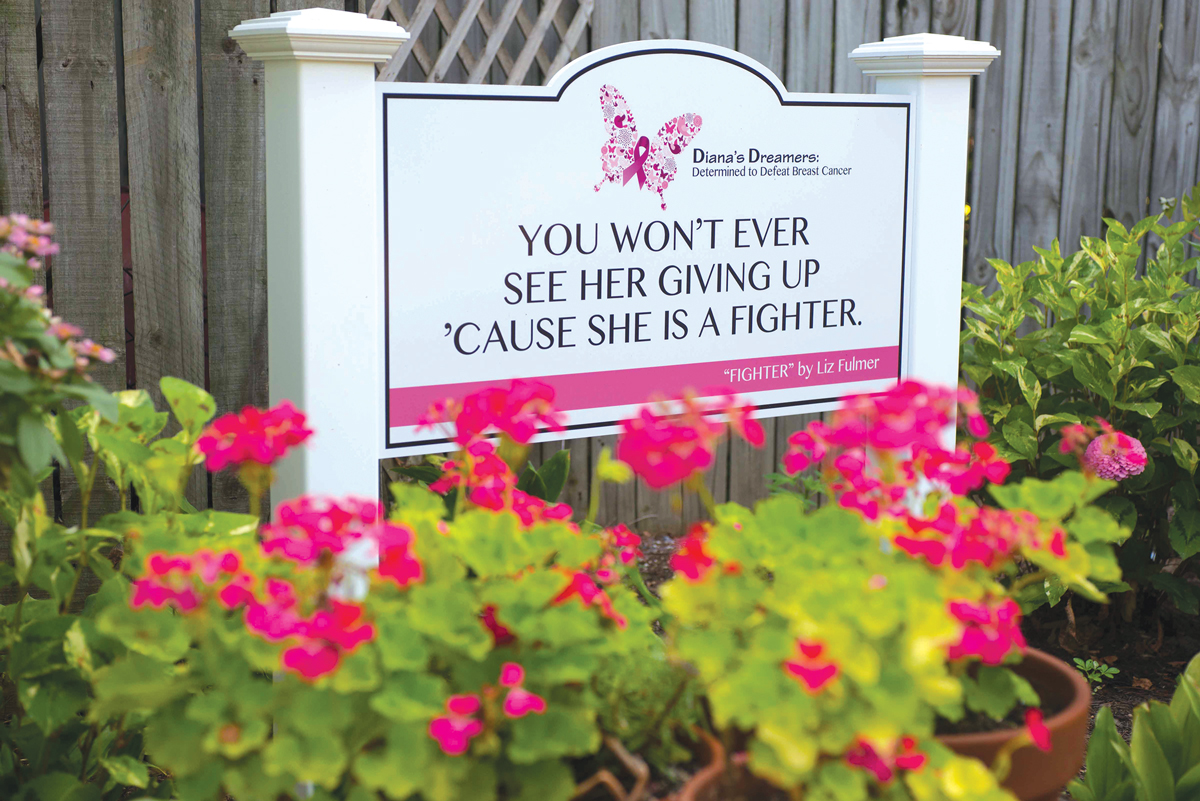 The Diana’s Dreamers sign contains a quote from the song “Fighter,” which was written by Liz Fulmer in 2016. The sign was designed and built by Matthew Patek.

Dennis went on to found Diana’s Dreamers: Determined to Defeat Breast Cancer, a breast-cancer-awareness program for college students. The endowment for the program was set up through the Millersville University Foundation and is believed to be unique to Millersville. “Our goal is to take it to other campuses in the state and eventually nationwide,” Dennis says.

At Millersville, students are made aware of breast cancer through the Diana Denenberg Spirit Garden, the annual Breast-a-Ville event that Dennis says is both fun and educational, and the Diana & Marsha Breast Cancer Awareness Center. (Marsha Frerichs was the wife of Dr. Richard Frerichs, one of Dennis’ colleagues at Millersville. She died of breast cancer in 2008. She was only 54 years old.) Dennis has also hosted fundraising events at the Ware Center during October, which is Breast Cancer Awareness Month. 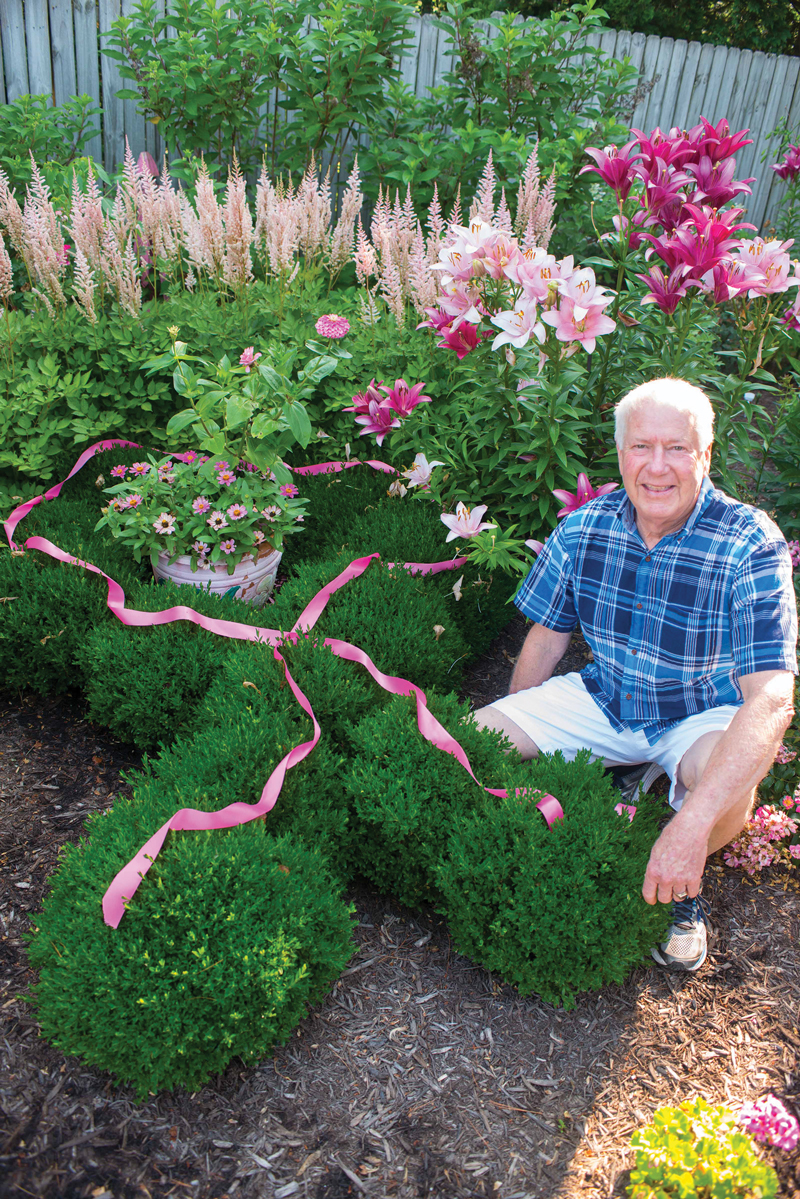 Dennis is pictured in the garden that is dedicated to his late sister, Diana, who battled breast cancer for 18 years. It blooms from spring through fall in shades of pink. A boxwood hedge takes the shape of a ribbon.

Family sentiment is also evidenced in the peonies that bloom in the spring. When Dennis was selling his late father’s home in Manheim, he specified that his father’s prized peonies weren’t part of the transaction. “I ended up with 75 peonies; they’re probably 35 to 40 years old,” he says,

Ultimately, Diana’s garden and spirit helped to inspire an idea. Dennis could share the property with other garden lovers as well as with nonprofit groups. In return, all he asks is that they make a donation to Diana’s Dreamers. “The gardens bring joy,” he says.
Last year, nearly 700 people toured the gardens and the house. “We even had a bus tour from Baltimore visit,” he reveals. Nonprofit groups are welcome to use the property to hold fundraisers for their causes. “We’ve been on the Demuth Garden Tour twice,” Dennis notes. 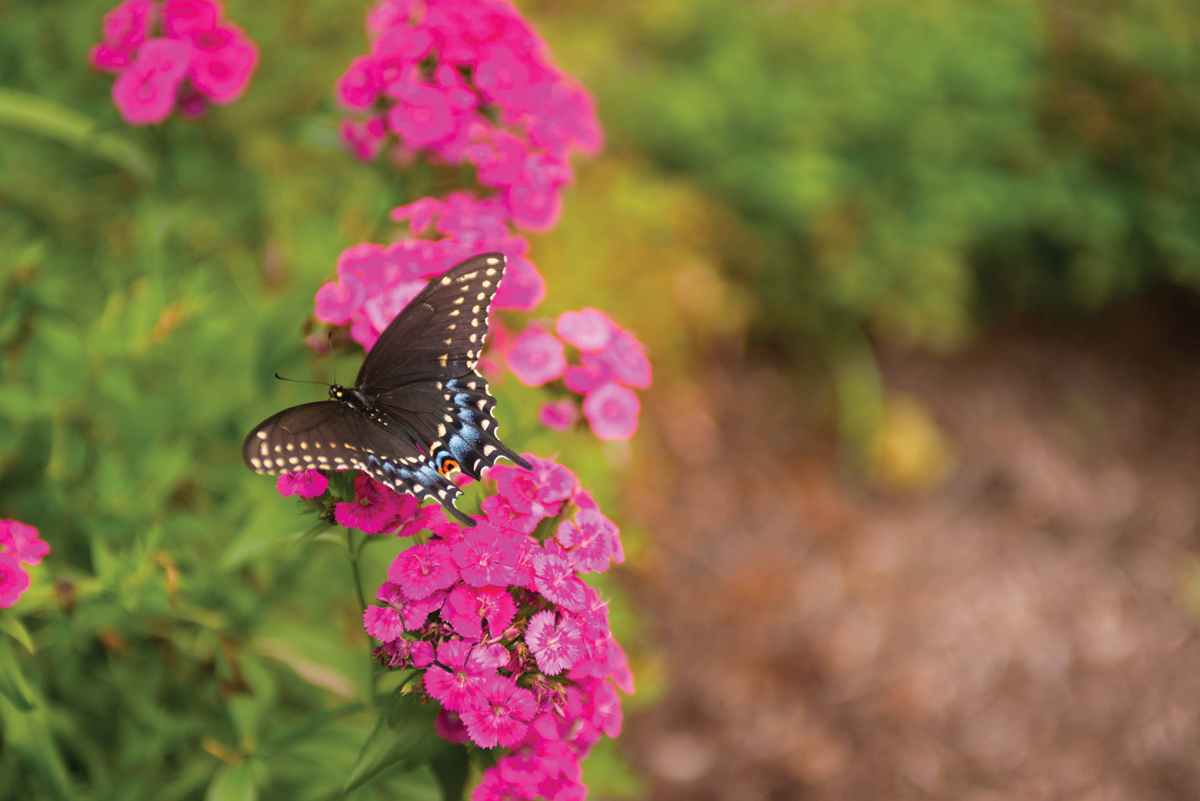 As for The Wizard of Oz, Dennis is a fan! Inside his home, a room is filled with Oz memorabilia. In the sunroom, Oz ornaments hang from a tree. Outdoors, a garden takes its inspiration from the movie’s famed yellow brick road. His Oz obsession is an outgrowth of this love for anything Art Deco.

How does one go from an acre of lawn to one of colorful gardens? Take it from Dennis, it requires a lot of work and dedication. His first project was on the northern edge of the property. The ground under the stand of trees was barren, creating a bit of an eyesore. Dennis planted it with ferns. Depending upon the weather, the ferns can flourish until
early August. 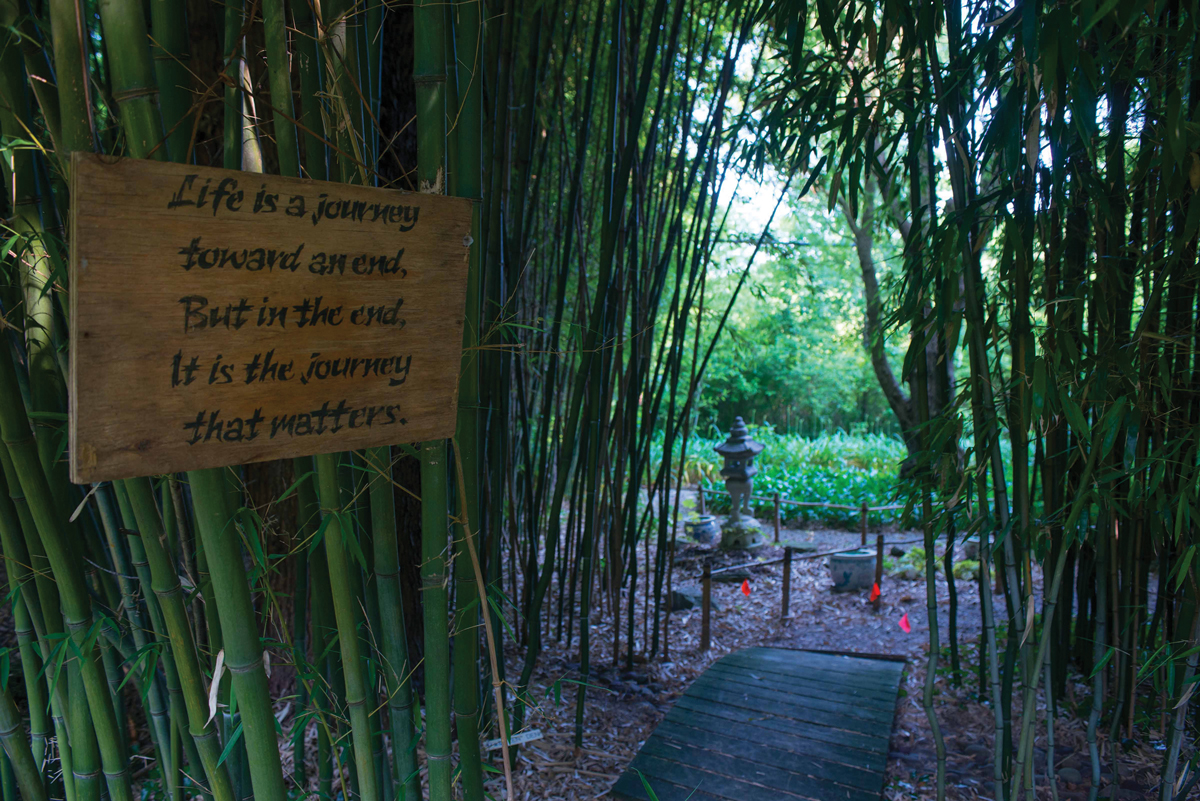 Next, he created gardens at the rear of the property that contain water features. An Asian garden, complete with a stand of bamboo, provides a place to pause and reflect. “This one required lots of trial and error,” Dennis explains of having to overcome issues with the ground being constantly wet. Finally, he figured since the house was surrounded on three sides by gardens, he might as well finish it and turn the front yard into a garden. 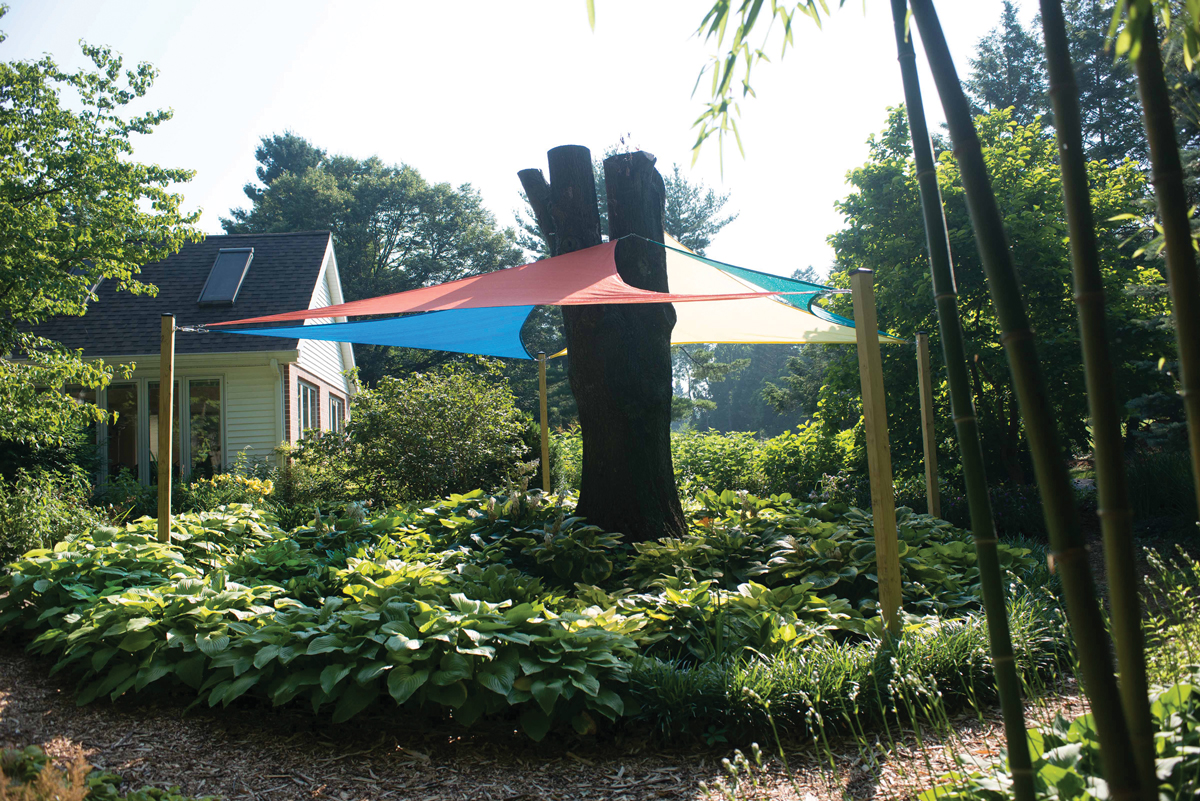 When a tree had to be taken down, Dennis faced the problem of having to move his bed of shade-loving hosta plants. He solved the problem by shading them with sun sails designed by Matthew Patek.

The front yard is a showstopper! It’s non-stop color beginning in the spring, when 6,000 daffodils bloom. It transitions through the summer to include an array of perennials and plants such as large agaves, succulents and elephant ears. The display proved to be so eye-catching that a sunroom was added to the front of the house in 2007. “It helped to open the house up, plus it makes for better traffic flow,” he explains.
When August arrives, the property blooms with hibiscus. “There’s probably at least 250 hibiscus plants,” he estimates. 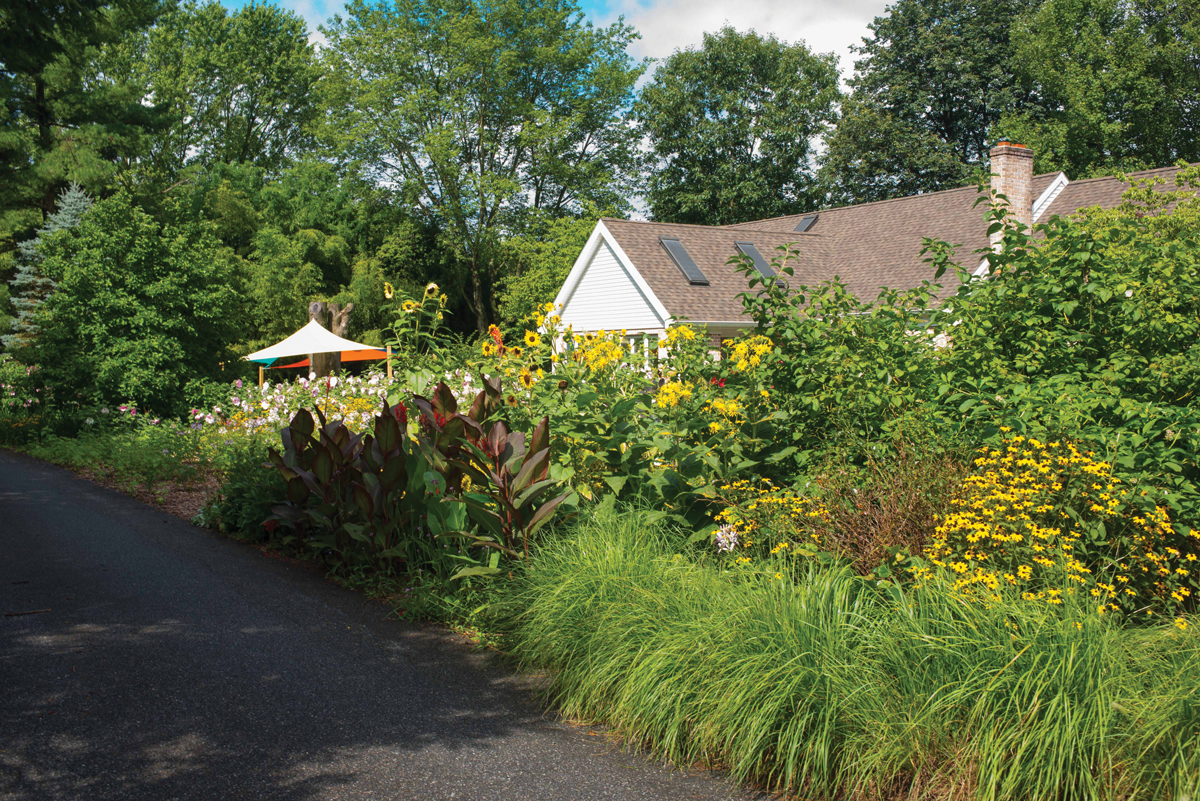 Fortunately for Dennis, he is aided by his two garden goddesses, Inge Storey and Greta Stoner, both of whom hold degrees in horticulture. “I couldn’t do it without them,” he says of gardening and hosting the groups that visit.

As you can imagine, an acre of gardens is quite an undertaking. Each spring, a cleanup is conducted before the plants emerge. Once that is accomplished, truckloads of wood chips are delivered to refresh the pathways. Everything is mulched. Plants are also divided and moved. New gardens are even created. In the fall, everything must be cut back. “At least 15 truckloads of debris leave from here,” Dennis says. “It’s the job I dread the most.” 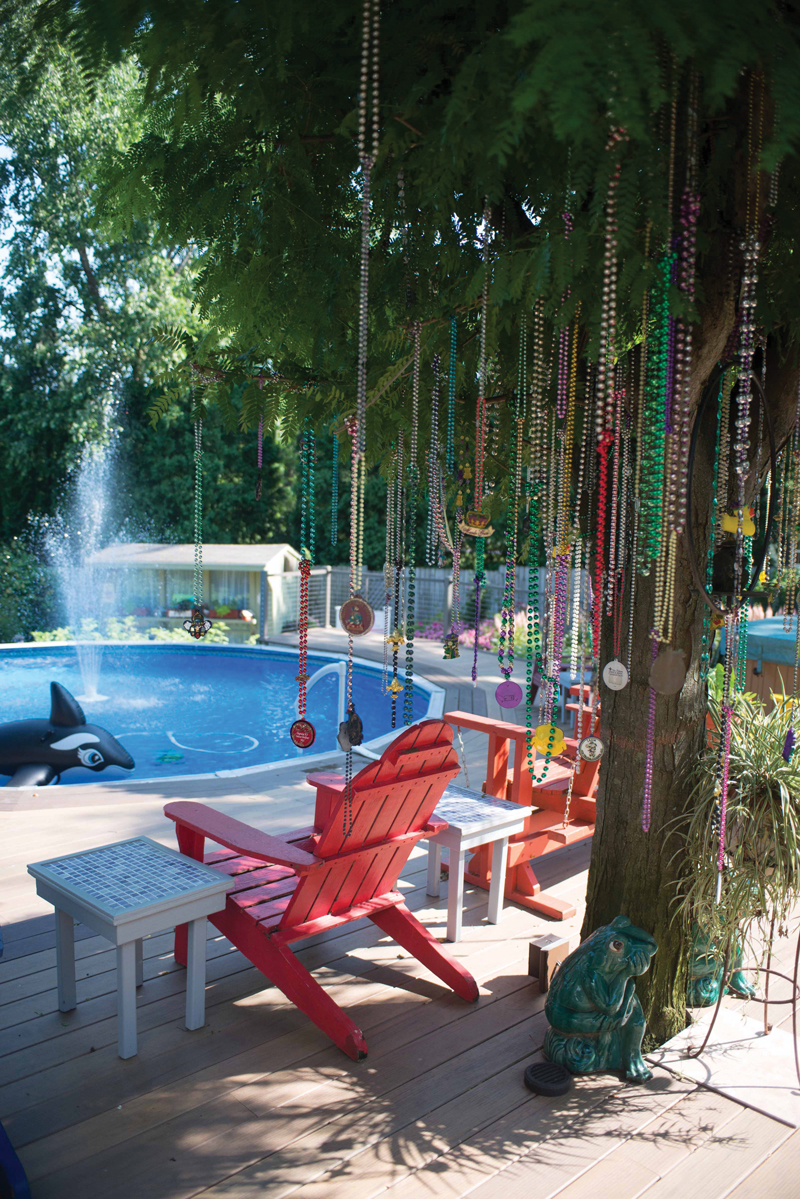 Dennis periodically travels to New Orleans to visit former neighbors Dave and Sarah Holt. Seeing all the beads hanging in trees and on fences throughout the city inspired the idea to hang souvenir beads from Mardi Gras from a tree on his property. “I’ll take an empty suitcase along and bring the beads home in it,” he explains.

Despite the time and work that must be devoted to the gardens, Dennis is determined to carry on. He and the goddesses are devising plans to make the gardens lower maintenance by incorporating more hardscaping and shrubs into the landscape. They’re planning to add more container gardens as well. “There’s no looking back!” Dennis says.
For more information about touring or holding an event at the Gardens of Oz, visit gardensofoz.com. 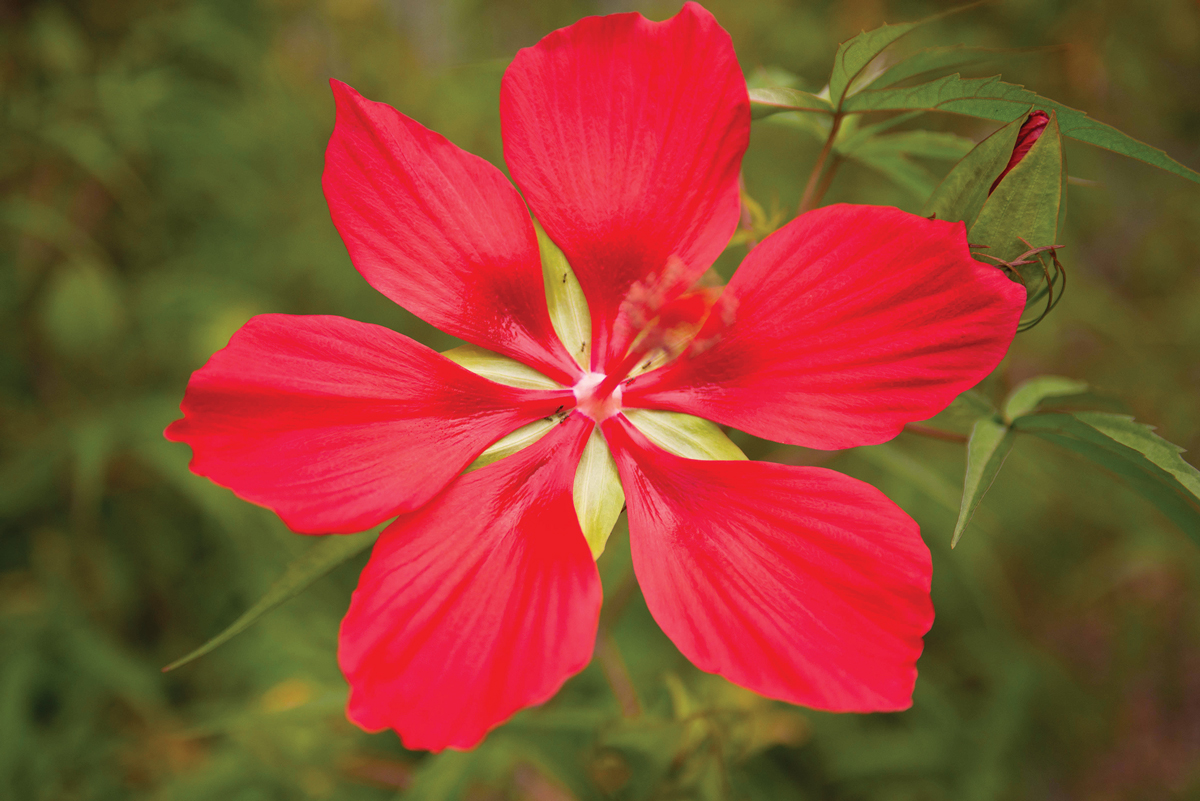