Jill Hoffines-Erb, owner of Floral Designs of Mount Joy, learned through attending trade shows that Lancaster County leads the way with regard to the fall-decorating trend that pays homage to the harvest. “There’s a swath that cuts through the Mid-Atlantic region where fall decorating is prevalent,” Jill explains. To her surprise, she learned that Lancaster is at the epicenter of the trend. At first, she found it odd that fellow trade-show attendees were always mystified by the items she ordered. But, then she discovered that in most areas, the emphasis is on Halloween, which then transitions into Christmas. “I’ve been told by suppliers that we’re the only area of the country to fully celebrate the harvest in a decorative manner,” she remarks. That may explain the reason why tourists flock to Lancaster County in September and October, and head for home with their vehicles loaded down with corn stalks, hay bales, pumpkins, gourds and fall blooms.

To demonstrate Lancaster County’s trendiness, we asked three businesses that are on the cutting edge of outdoor decorating to share some favorite autumnal projects. All were photographed last October. 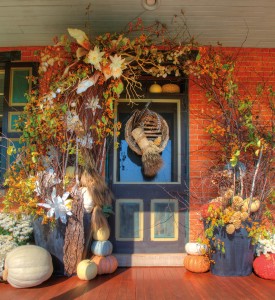 A victorian farmhouse near Mount Joy provided the canvas for this fall display created by Floral Designs of Mount Joy. “Something garish or scary would have looked out of place here,” says Jill Hoffines-Erb. “So, we took a non-traditional approach that is more in keeping with the period. Our design incorporated natural elements and non-traditional colors.”

The arch that encompasses the front door is anchored by branches  of birch. Bittersweet serves as the connective element. “We left the green leaves attached for a more natural look,” designer Jim Showers points out. Floral accents were provided by Fantasy Flowers, which are made from a latex-like product. “They’re lightweight, very pliable and weather well,” Jill notes. “I like the pops of white,” she adds. “I think white is beautiful for fall.” Bleached pinecones (a throwback to the ‘60s and ‘70s) that Jill sourced in California add to the natural theme. Branches from silver-dollar plants further decorate the arch, as do sheaths of wheat. Weathered branches of manzanita, a shrub that grows in arid areas of the country, also figure into the design.

The arch is anchored by two steel containers that, according to Jill, “add an industrial, edgier look” to the tableau. “They would allow this design to look at home anywhere, be it a contemporary, traditional or period architecture,” she points out.

The door wreath is composed of a driftwood bowl that holds a sheath of wheat, pinecones and large pheasant feathers. The wheat serves to unite the wreath and arch.

Pumpkins and gourds spill onto the porch, adding texture and color. “We get our pumpkins from a local farmer,” Jill says, referencing Mount Joy’s Kevin Charles.

Jill and Jim agree that the décor could easily transition into the holidays and even carry through the winter months. 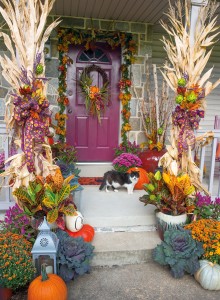 Sue reports that once Labor Day is history, customers are always “anxious to tear out their annuals” and replace them with the growing selection of plants that embody the fall season. The requisite mum (which continues to evolve thanks to new colors) has been joined by such seasonal plants as asters, closia, ornamental peppers, pansies, ornamental cabbage/kale and ornamental grasses. Tropicals such as croton pair nicely with the fall blooms.

The traditional carving pumpkin has been joined by a supporting cast of hybridized pumpkins, gourds and squash that bring new colors, shapes and textures to the stage. “That’s happened over the past 10 years,” says Sue. Faux pumpkins with monograms are also a favorite with homeowners.

Ribbon, which is ordered in January and February, has also taken on new dimensions. Woven textures that mimic burlap and muslin perfectly complement the harvest look. Many are embellished with fashion-forward colors – this year, it’s black, orange, acid-green and purple – that are further enlivened with glitz and glitter. Wreaths, swags and garlands made from deco mesh are also in demand.

For this project, plants and pumpkins provide a path to the front porch, where two deluxe cornstalks glisten with colorful ribbons/bows, twig balls, seed picks and fall leaves. The porch is filled with more plants, pumpkins, and a large container that holds birch poles and other branches. The doorway’s fall-inspired framework was crafted from a traditional boxwood garland that Sue and Karen then wrapped with leaves and lights. The complementary wreath is festooned with cascading grasses, feathers, ribbon and a pumpkin. Lanterns filled with battery-operated candles add soft light to the scene once night falls. The door garland, birch poles and lanterns provide the foundation for holiday décor. 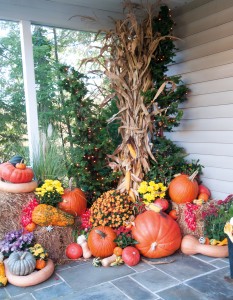 The challenge for Tim Arpin was to create a cohesive design for his clients that would encompass the front, sides and back of their home. Unlike most projects, the front door would not be the focus of his design. “The porch door is the primary entrance to the house,” Tim explains. So, the porch became the focal point of his design in the front of the house. First, he had to create a background for the harvest-themed design. Cypress trees, corn stalks and grasses were brought in to create a backdrop for the array of pumpkins, gourds, squash and flowers that composed the design. Hay bales added more texture and provided varying heights for display purposes. “The porch worked really well,” says Tim. “It’s open, so the display could be seen from the street; plus, since the porch is covered, it protected everything from the weather and helped it stay fresh-looking well into November.” The porch was illuminated by orange lights that wound through the cypress trees; strings of red-chili-shaped lights that that were bundled cascaded down the hay bales. “They were quite effective,” Tim observes.

Farther out in the yard, a column was topped by an oversized, metal jack o’lantern (a HomeGoods purchase made by the homeowner), which takes on an inner glow once night falls. It grew in stature when Tim placed it in an urn that was further filled with plants and small pumpkins. Container gardens – filled with plants such as ornamental peppers, barberry, hardy fern, yucca, ornamental cabbage, mums, snapdragons, pansies, Jerusalem cherries and kalanchoe – decorated the entrances to walkways and the steps leading to the front door, which was hung with a simple but colorful wreath. The outdoor-living area at the rear of the house was also similarly decorated for the season. 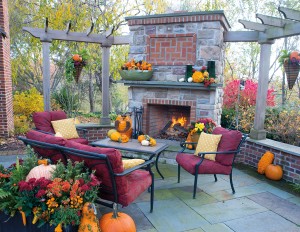 The patio decorated by The Gilded Lily.

Tim purchases his produce from the Abner Miller farm that sits along the Marietta Pike west of Farmdale. “Everything is organically grown,” Tim reports. (Hay bales are also purchased from a local farmer.) “And, it’s recycled,” Tim relates. A client who has a friend with sheep and a donkey suggested she contact Tim and ask if she could have the discarded produce for her animals. “She comes and gets what we bring back to the greenhouse, and the animals ‘repurpose’ it,” he explains. 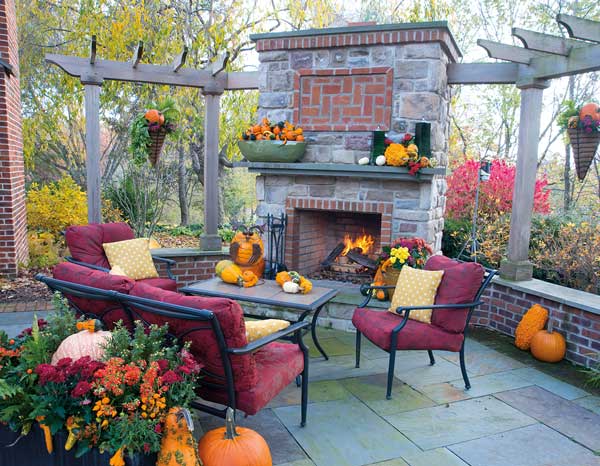 The patio decorated by The Gilded Lily