How to make the best use of the bounty of produce that is available in August and early fall is a dilemma many of us deal with each season. One solution is juicing, a process that removes juice from fruits and vegetables, thus providing a refreshing and delicious way to quickly absorb vitamins, nutrients, antioxidants and enzymes. 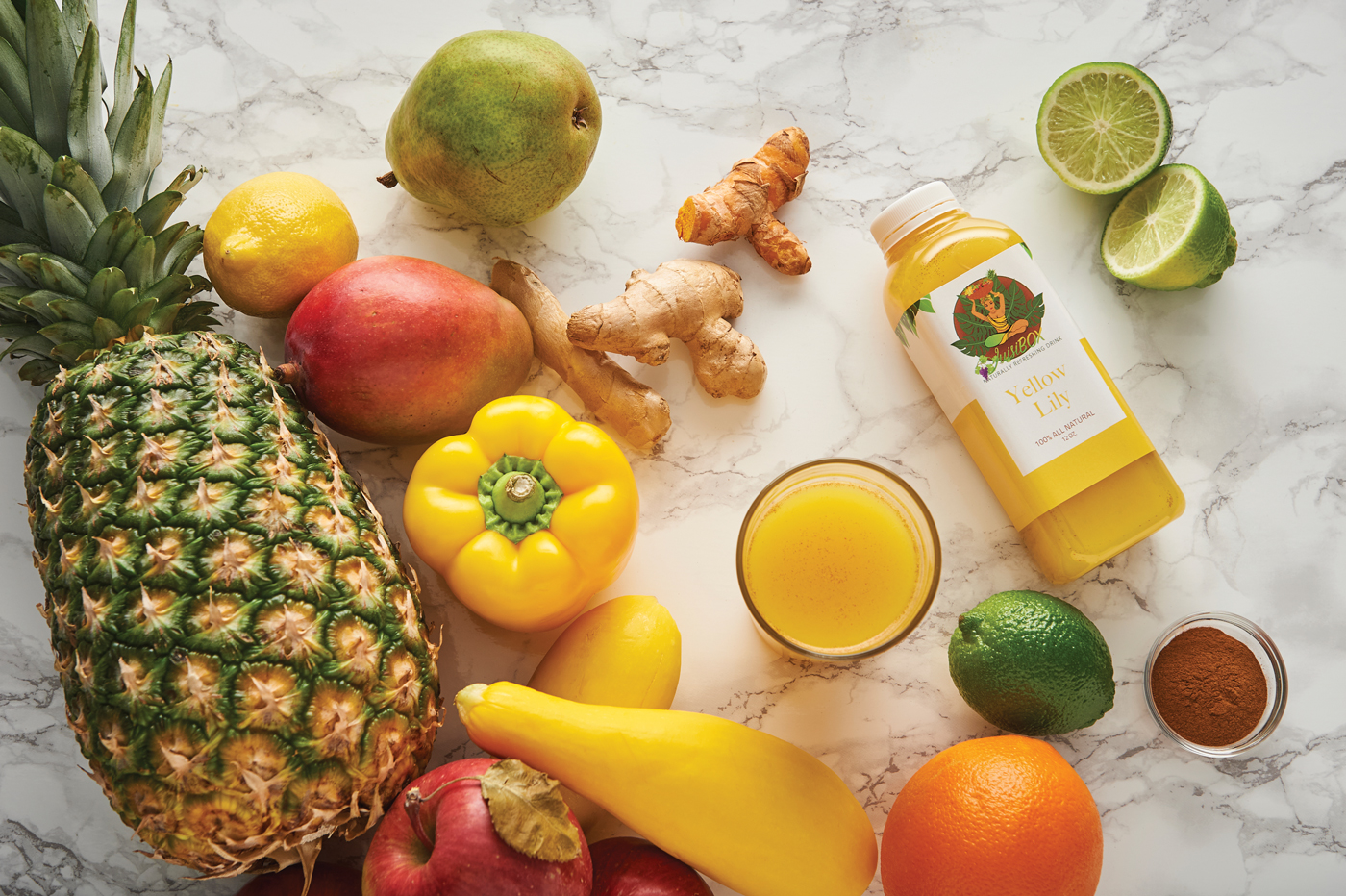 Yellow Lily is my favorite juice from Juisibox and entails such ingredients as “plump pineapple balanced with pear, sweet mango, hearty yellow pepper, squash and hints of lemon, lime, orange and ginger.”

I got into juicing several years ago – along with some friends and coworkers – after watching the 2010 documentary, Fat, Sick & Nearly Dead. It tells the story of Joe Cross, an Aussie who set out on a journey to better health through juicing fruits and vegetables for 60 days. Thanks to taking such a journey, Cross was able to eliminate many of the autoimmune medications he was taking and lose 100 pounds, which he’s kept off. Having seen Cross’ health rewards, a few of us purchased Omega auger juicers – also known as masticating juicers – and started our own journeys to better health.

The key to a juicer’s value is that it slowly crushes fruits and vegetables at a speed of approximately 80 revolutions per minute, so as not to cook or oxidize the juice. It yields a high volume of juice since the strainer removes seeds, pulp and skin. Some soluble fiber does get through, which separates if left to sit or it can be stirred in, if desired. Another attribute is that most juicers are quiet, enabling you to prepare juice any time – early or late – without waking up the whole house. 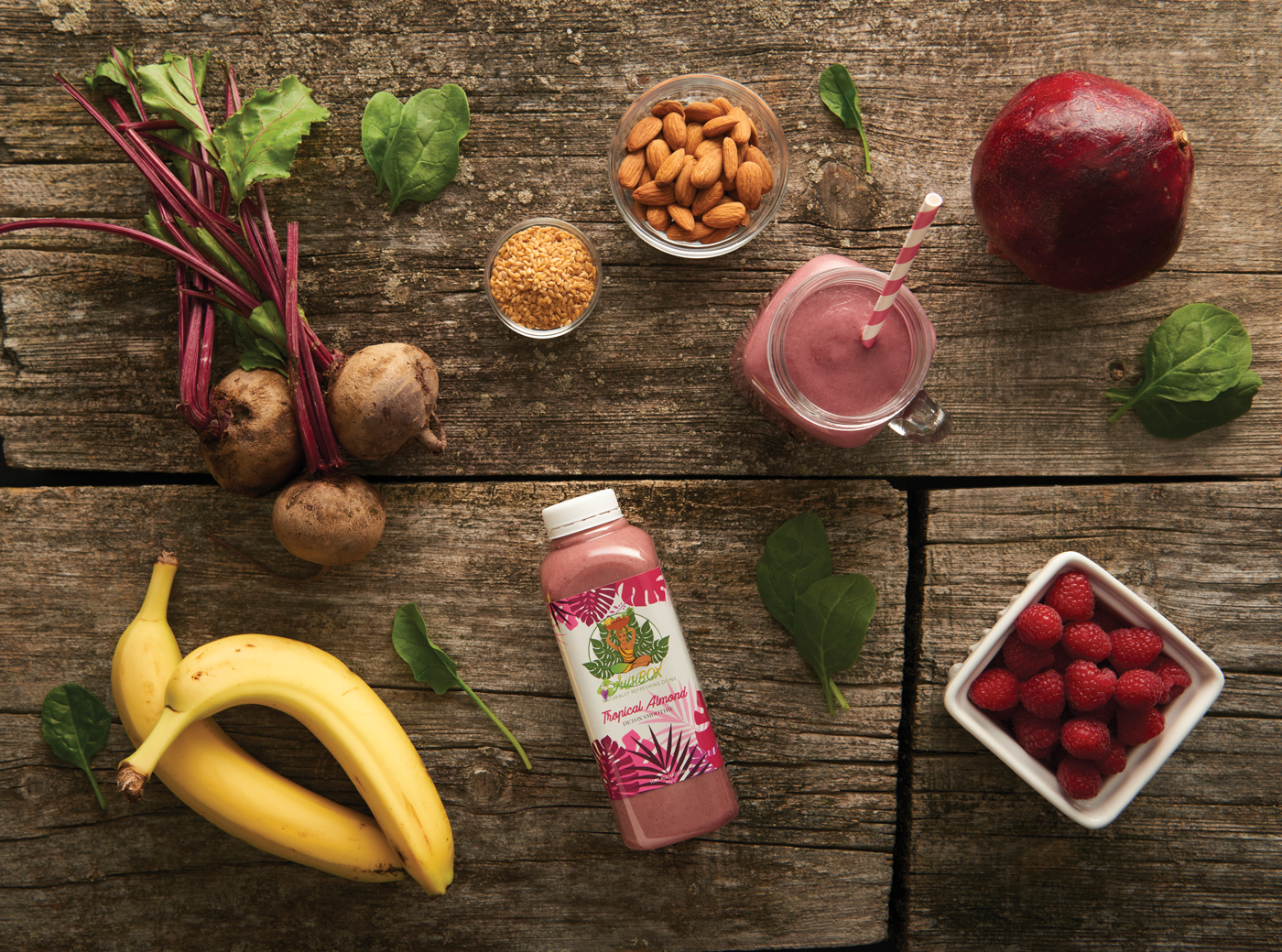 Tropical Almond, a thicker, creamier smoothie, is made with almonds (for added protein), berries and bananas. It’s great as a meal replacement on the go.

The downside of a masticating juicer is that it can take longer to yield juice as compared to other types such as a centrifugal juicer. Regardless, the final product yielded by any type of juicer outshines those produced by a blender or food processor.

If you’re intrigued, it might be worth your while to get started by purchasing prepared juices. Then, if you find yourself a juicing convert, take the next step and invest in a juicer (a word of warning: they can be pricey).

Once you’ve purchased your juicer, a world of possibilities awaits! The wealth of farm stands and markets in Lancaster County, plus the popularity of home gardens, makes juicing accessible and economical. For example, produce that is bruised or irregularly shaped and is often sold as “seconds” is perfect for juicing. After all, the fiber is going to be pressed into a pulp; what matters is the quality and nutritional value of the liquid. Cucumbers and apples are full of juice and can be bought in large quantities. Depending on your preferences and what you want to add to your diet, the options are endless and could include celery, carrots, lemons, grapefruit, ginger, kale, beets, peppers, radishes, spinach and even herbs. 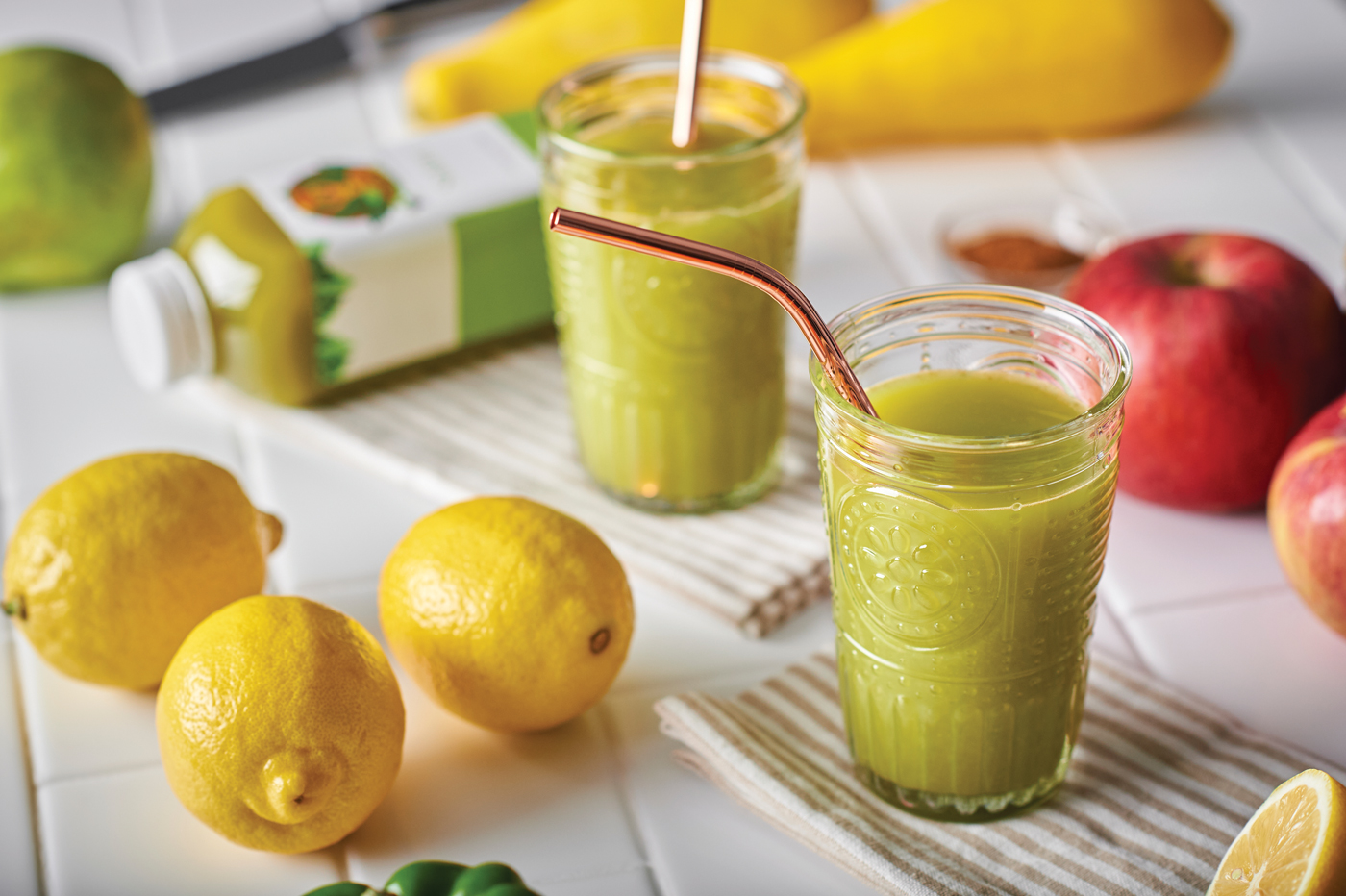 Buy Local: Get acquainted with local fruit/vegetable growers and markets. Nothing tastes better than local, seasonally available produce. Better yet, visit an orchard that allows you to pick your own.
While local, seasonal produce is preferable, grocery stores are doing an admirable job in keeping their produce departments stocked with the colors of the rainbow throughout the year. Sometimes that comes at the cost of an artificial process that allows for items to be shipped long distances. Apples and cucumbers, for example, are often coated in a wax preservative that’s food grade and functions as a fungicide while adding an appealing shine protected during shipping. However, the waxy shine can be off-putting. To remove the wax before juicing simply remove the peel – the wax can be difficult to wash off – and you’re ready to go.

Explore Local Natural Food Stores: Wheatgrass, which is dense in minerals and vitamins, is often referred to as a superfood. A little goes a long way. Flats of wheatgrass can be ordered from Miller’s Natural Foods in Bird-in-Hand, typically with two days’ notice. Another option is to grow your own: Rohrer Seeds offers packets filled with 500 seeds. Wheatgrass stays green only for a few days so don’t delay in using it.

Get Into a Routine: Preparing juice on demand is the best bet, but refrigerating fresh juice in glass jars for a day or two can also work. Juicing at home does involve prep work, so if you’re in a hurry, preparing fresh, homemade juice in the morning might not fit into your routine. It might be more prudent to prepare something the night before. However, juices shouldn’t be prepared too far in advance, as they’re not pasteurized, which could lead to a growth in bacteria. Fresh-pressed juices have a short shelf life and can oxidize quickly. 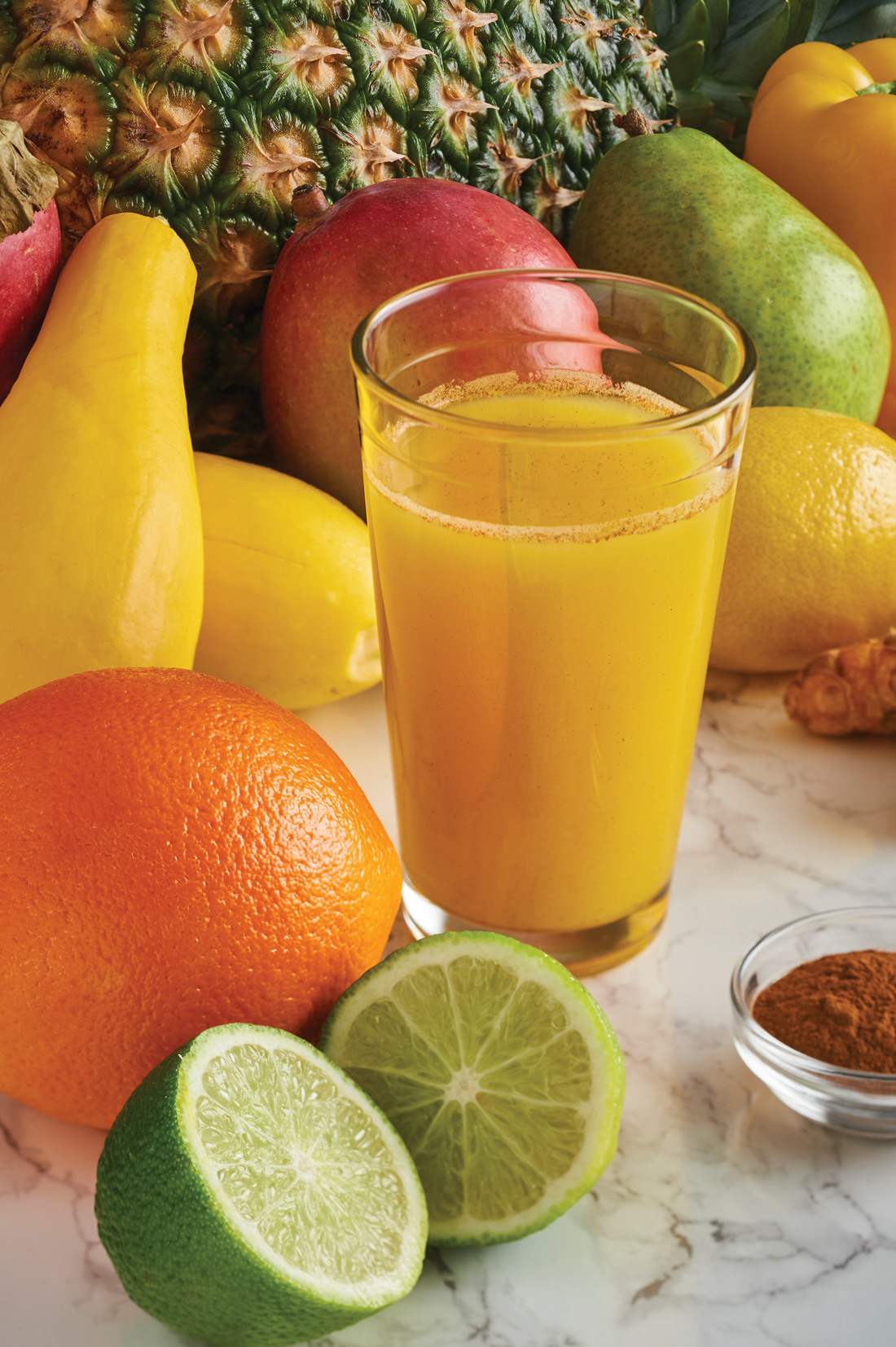 Experiment: To find flavor combinations you like best, try juicing individual fruits and vegetables and place them in separate containers. Then develop blends that suit your taste. Keep in mind that sweeter fruits, while high in vitamins, are typically high in sugar and calories, which can be offset by juicing a higher proportion of vegetables or by choosing more fruits lower in sugar. Joe Cross recommends juicing by the 80/20 rule (80% vegetables and 20% fruit). He also recommends that 50% of your veggies should be of the green variety in order to have better control over sugar content. To learn more, visit rebootwithjoe.com.

Juice alone is also protein-deficient, which can lead to muscle loss if approached as a long-term substitute. Add a serving of nuts on the side or mix whey protein powder into juices with water or Greek yogurt to improve the consistency.

Meal Replacement: Personally, I find the addition of fruits and vegetables to my diet through juicing to be energizing. Substituting the occasional meal or starting the day out with juice usually replaces something less healthy, like coffee and a donut. 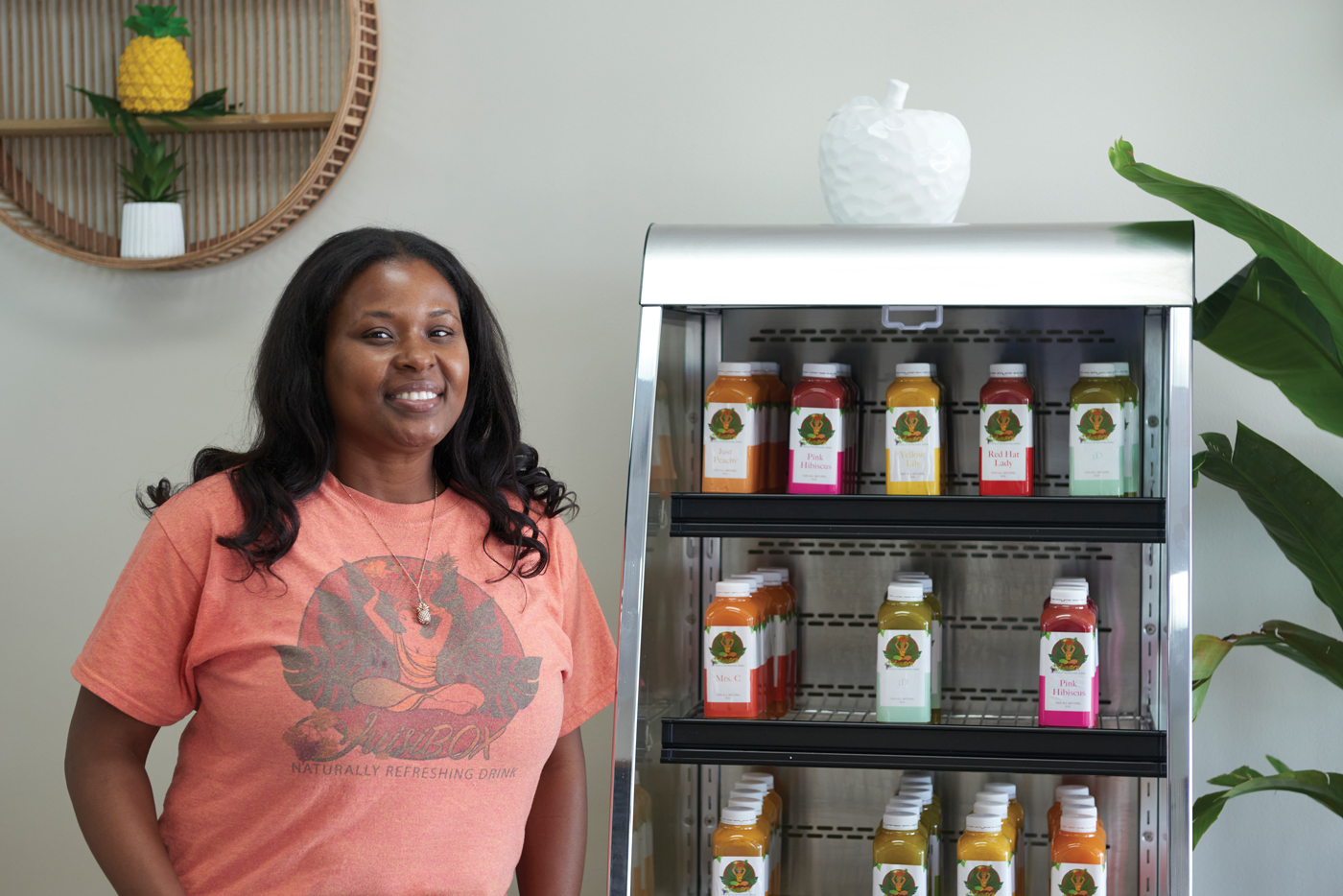 Juisibox owner, Nyisha Hammond, displays some of her current fruit and vegetable juices.

If you’re looking for convenience, a local option also exists. I first met Nyisha Hammond, owner of Juisibox Juices, at the now-closed Lancaster Marketplace. A large, slow-press juicer caught my attention, crushing produce at reduced speeds to cause less oxidization or heat for a crisp flavor. “My menu changes every season,” says Nyisha, who uses small batches of unpreserved, never-frozen produce, often sourced locally. The blends of juices Nyisha prepares are complex and refreshing. As it turns out, she started the venture by turning lemons into a lemonade of sorts.

Nyisha’s journey to juicing started in 2010, when her grandmother bought her a juicer. The real significance of the juicer, however, came to fruition six years later, when Nyisha survived a car accident on Route 222. Swerving to avoid hitting an unsecured wheelbarrow that had fallen from the vehicle ahead of her, she ended up in a head-on collision with a semi-truck. The resulting collision put her in rehab for speech, occupational, physical and cognitive therapies. Prior to the accident, she was working as a counselor; afterwards, she became a graduate student at George Washington University in Washington, D.C., focusing on rehabilitation counseling. 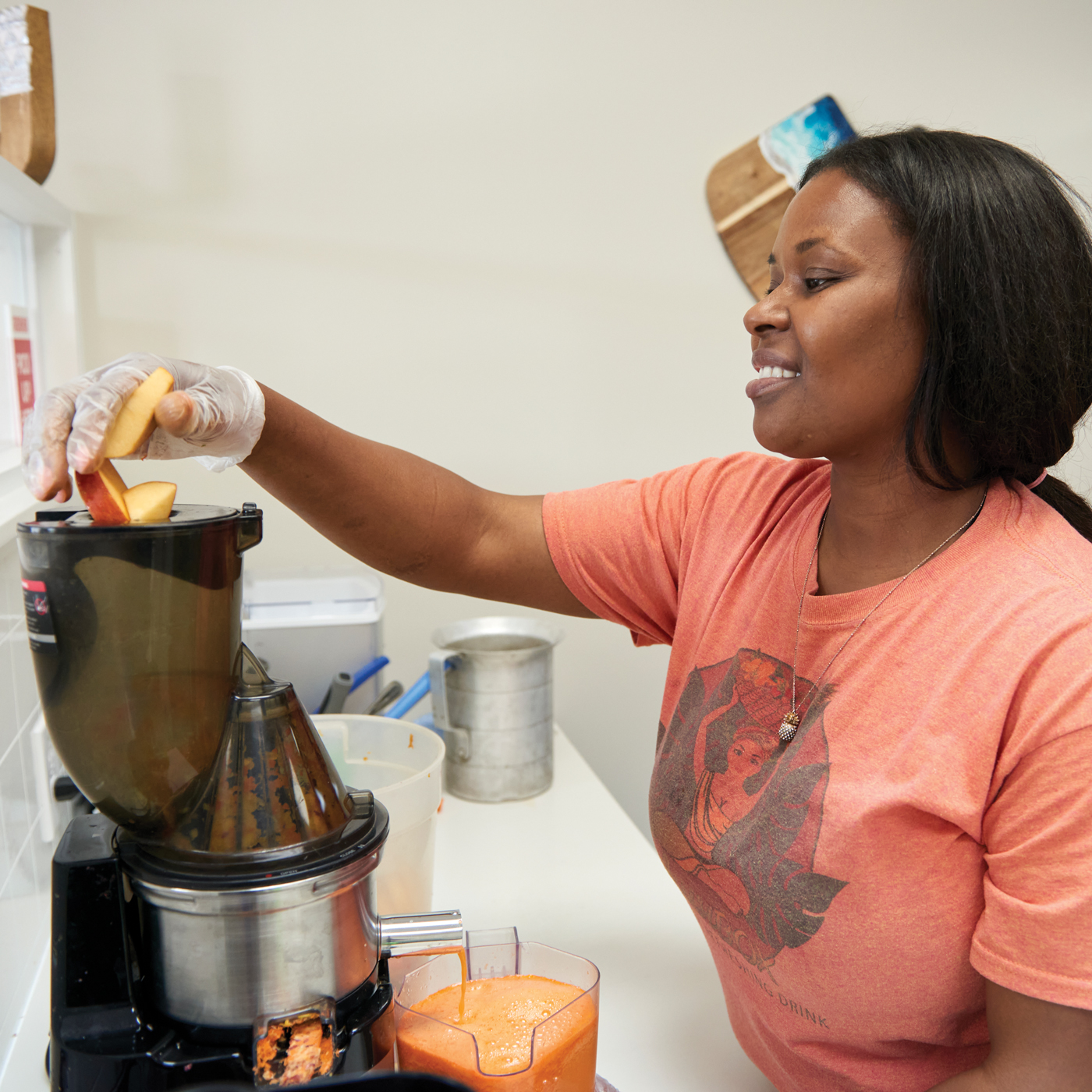 Juisibox’s centrifugal juicer slices produce with blades; the liquid is separated through spinning. Seeds and fiber are removed without adding heat.

Only a year later, fate struck again, when a second automobile accident put Nyisha in an ICU for 30 days, followed by another 30 days of rehab. Suffering a double compound fracture in her tibia and fibula, Nyisha initially thought she would lose her leg. After enduring multiple surgeries she had to learn to walk all over again.

She also devised a holistic treatment plan. “I began juicing to heal myself and to decrease the pain from fibromyalgia and the fractures and surgeries on my leg,” she explains. “I had to take a holistic approach.” The medications she was prescribed only worsened many of her symptoms. “We live in this world where doctors treat you with a pill. Food is my medicine. I was always the woman who had a smoothie in her hand,” says Nyisha. “I was healthy before my accident and I think that’s why, at 32 [years young], I could recover. You have to have your body ready before something catastrophic happens. After the second accident, I juiced every day, five times a day. It was a pick-up-and-go drink that has nutrients in it. It’s wellness in a bottle.” 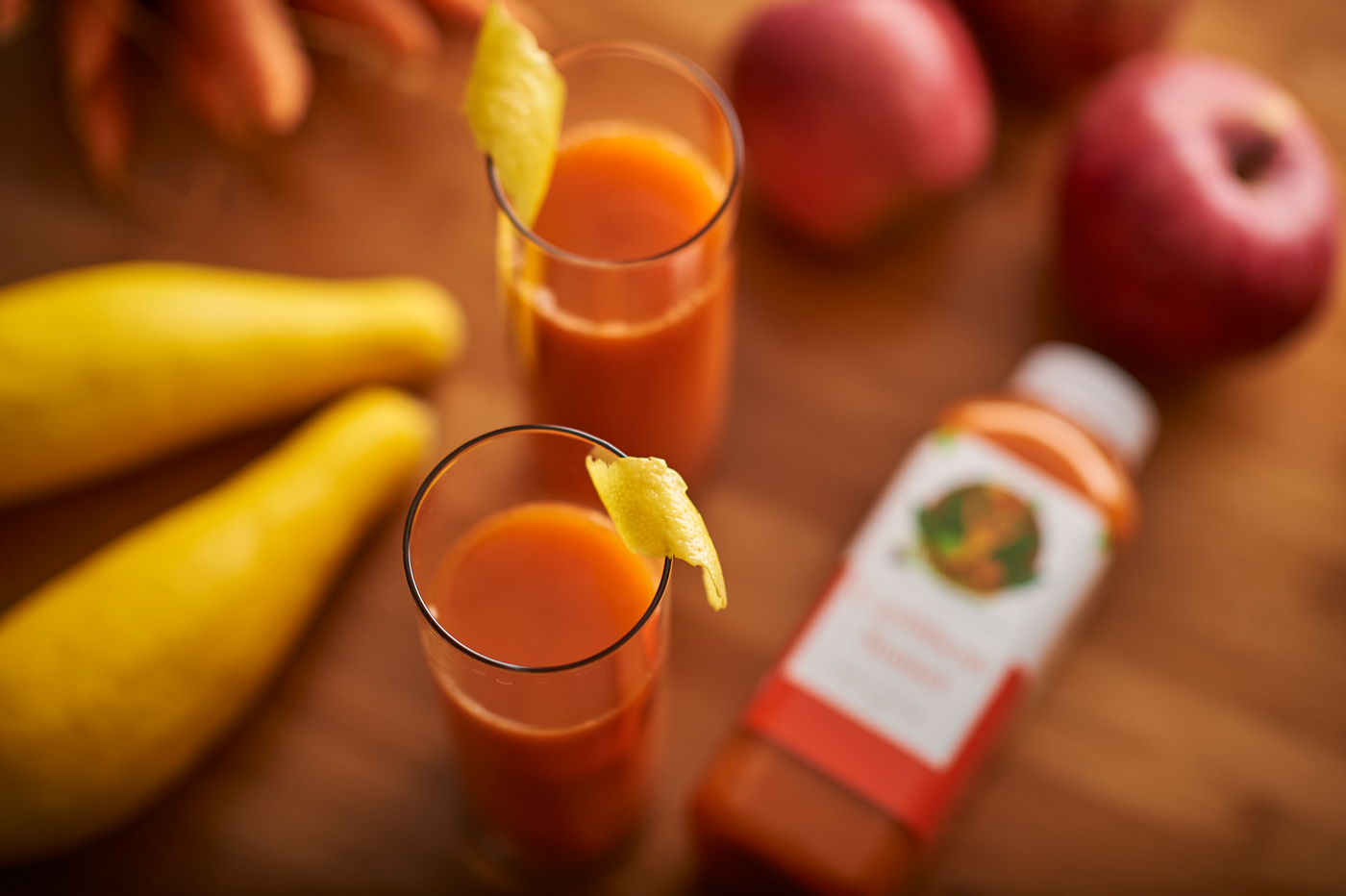 Having previous experience in the food and restaurant industry, Nyisha felt she was prepared to start selling her juices in March 2019. Participating in a health fair convinced her she was on the right career path; she sold out of all of her juices in the first hour. She found further direction through working with Bright Side Opportunities Center in Lancaster. Her next step saw her launch Juisibox at Lancaster Marketplace. Despite the pandemic, her business continued to grow and in March of this year, Juisibox relocated from the Hawthrone Centre to Foxshire Plaza on Fruitville Pike, where juices, smoothies, wellness shots, vegan soups, fresh salads and vegan snacks are available.

“Be the best you,” is Nyisha’s mantra. “Constantly educate yourself. Do the impossible.”

Juisibox owner, Nyisha Hammond, displays some of her current fruit and vegetable juices.