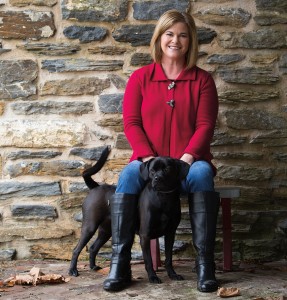 Fifteen years ago, Wendy was going through her near-daily exercise regimen of riding a stationary bike and lifting weights at her gym. Suddenly, she felt pain at the back of her neck. She explained it away and pushed through her workout. Afterward, she stopped at the grocery store. The pain reoccurred and worsened. Wendy thought she might be having a heart attack and went to the aisle where pain meds are located, opened a bottle of aspirin and took some. “I didn’t know what to think,” she recalls. “I wasn’t having the typical symptoms you associate with a heart attack.”

She then drove herself to the ER. A stress test was ordered. When she began to run, the pain returned. Tests determined she had a 99.95% blockage of the LAD (left anterior descending) coronary artery or, as she calls it, “the widow maker.” According to Wendy, she was “literally days away from a massive heart attack.” She was only 39 years old.

She was surprised, yet she wasn’t. Her mother, father and brother all had heart disease. In fact, her mother died in surgery after suffering a heart attack. Her father has undergone seven bypasses. Her brother has had two heart attacks. “Everyone smoked,” she notes. Wendy tried to dodge the bullet by being a non-smoker and staying active.

Following surgery, Wendy went back to her busy life. She was working for a large printing company as an account rep. She thrived on the adrenalin rushes that came with the job that required her to be on call 24/7. She was also a mom (two children, two step-children and now, four grandchildren). Then, a dog joined the household. Her husband, John Reitzel, said he’d like to get a dog for his children. “I had not had a dog in 25 years, so this was new territory,” Wendy explains.

In order to become a dog person, Wendy began doing her homework. “I’d sneak off to the Humane League now and again to see what they had,” she continues. During one visit, she spied a newly arrived litter of Lab-mix puppies and immediately called John. (He was surprised to learn where she was calling from.) They selected a female and named her Emily. Everyone fell in love with Emily, especially Wendy. “I called her my ‘heart dog,’” she says.
Thinking her heart issues were behind her, Wendy added more to her plate. She continued to work full-time. She began running half-marathons. She and John had purchased a house in Columbia and were renovating it themselves. “We’d work all day and then come here evenings and weekends. I was tired!” she recalls.

During walks, she tired easily and then that pain in the neck returned. She called her cardiologist. A heart catheterization revealed three blockages, the worst of which measured 70%. Open-heart surgery was on her agenda. She wanted to spend time with her family prior to surgery and was settling in with John and one of their grandsons to watch the 2012 Super Bowl when she began to experience odd sensations. She told John they had better head for the ER. She had open-heart surgery the following day.

The Reitzels decided that change was in order. Wendy left her job. “We decided to make a lifestyle change and live very simply,” she says. She also altered her view of exercise and decided to take a more balanced approach.

Early in 2013, Emily became ill. Her kidneys were shutting down and there was nothing that could be done. She was 13. Wendy held her during the euthanasia process. Overcome by grief, Wendy vowed she’d never have another dog.

As the saying goes, time heals all wounds. A year ago, the Reitzels decided to welcome another dog into their lives. Wendy started the process by visiting local shelters and completing a profile on Petfinder.com. Through Petfinder they found Stormy, a puppy who was being fostered by Elizabethtown-based 2nd Chance 4 Life Rescue. “We bonded right away,” Wendy reports. “We don’t view her as a dog. She’s part of the family. Everyone knows her in the neighborhood.”

Stormy is now an integral part of Wendy’s new exercise regimen. “She keeps me motivated,” Wendy notes. “We walk two to three miles a day.” For her birthday, Wendy received an unusual gift: A DNA test for Stormy to determine her lineage. The test results determined she’s a mix of boxer, Lab, shih tzu and Maltese. “She has a great temperament,” Wendy adds.

Wendy says she has discovered a whole new world outside of the workplace. She’s become a gardener and has been steadily transforming her backyard. She’s also becoming better acquainted with Columbia and is part of a group that is reviving the town’s Garden Tour (June 10). She’s also involved with Puggle Me Home, a nationwide transport system that shuttles adopted animals to their new homes. And, she’s helping a friend with her new restaurant in Landisville, Miss Callie’s.

Wendy has also become active with the American Heart Association and seizes every opportunity to discuss heart disease with other women. Last May, she was one of the speakers at the Lancaster chapter’s Go Red Luncheon. “Life is a journey,” she theorizes. “You have to accept where it takes you. Right now, life is good.”

Women face six major risk factors for heart disease. Oftentimes, these risk factors can be prevented, controlled or treated with diet, exercise and medications. The risk factors are as follows:

Diabetes Risk factors that cannot be controlled include: