Rollin’ Into the Future of Bicycles
Search
September 27-29
The fairgrounds are located at 851 Village Road in Lampeter.
The fair opens Wednesday at 12 p.m. (closing at approximately 10 p.m.). On Thursday and Friday, the fair opens at 9 a.m. and remains open through the conclusion of the last events, which begin at 9 p.m.
Admission is free; parking is by donation.
Details: Westlampeterfair.com

West Lampeter’s fair originated in 1924 when projects of students who attended the West Lampeter Vocational School were displayed over the course of three days in late October at the West Lampeter High School. The fair was incorporated in 1929 and a year later, it was officially named The Community Fair. Dairy judging began in 1925, with Guernsey calf and swine competitions getting underway for the first time in 1928. Thanks to a grant from the state in 1931, the fair was able to expand as the funding allowed for the rental of two tents that were used to house dairy animals and commercial displays. Over the next decade more exhibits were added to the schedule.

Land for the fairgrounds was purchased in 1948. A year later, the property hosted its first fair. Since then, various buildings have been constructed, and the purchase of an additional 16 acres provides for added parking. The initial four-page premium book has grown to 300 pages.

West Lampeter’s focus has always been on agriculture, family and community, and to providing a “wholesome educational experience for all ages.” Like neighboring Solanco (and Manheim), the fair has no Midway. However, the fair is not void of entertainment; over the years, athletic events, concerts, plays and even a 20-mule-team show have been enjoyed by visitors to the fair.

The fair’s first queen was crowned in 1958, only then, the young lady was known as the livestock queen. Candidates, who represent various school-based and agricultural clubs, must first compose an essay to qualify for the honor. Today, the candidates for fair queen parade to the fairgrounds accompanied by the Lampeter-Strasburg Marching Band. Candidates then field random questions posed by the judges.

The fair received an honor when Jacqueline Pratt, the 2001 Fair Queen, went on to become the 2002 State Fair Queen.

The fair also hosts a baby parade, children’s petting zoo, the Community Fair Restaurant, a pet show, tractor pulls, a tractor parade, an auction of baked goods, a soup cook-off, pig races and a tug-of-war contest. Commercial exhibits have grown to such an extent that four tents are required to house them. On Friday the fair stages an all-Western horse show. Civic organizations host an array of food stands.

West Lampeter also has some unique aspects. On the Sunday before the fair, a community hymn sing is held at area churches. Its board of directors is a blend of farmers, business people and community volunteers who value what the fair means to that area of the county (the original board had 13 members and has grown to its current 45 members). The fair also takes pride in the Youth Encouragement Awards program that has resulted in increased participation by the younger members of the community in such areas as baking, canning, art, sewing, plants and animals. 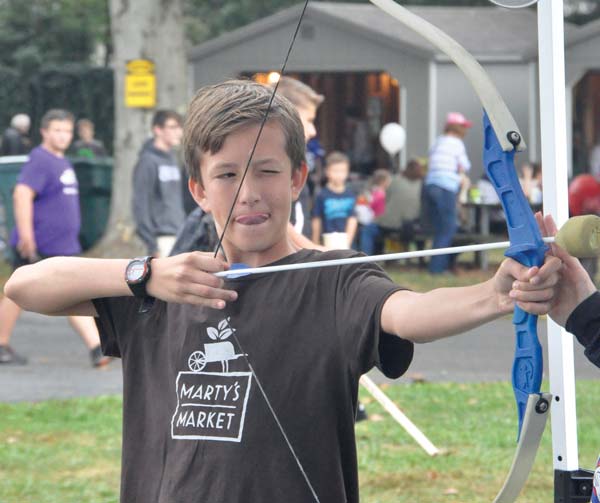