A few months ago as I was driving to an appointment, I grabbed a random CD and popped it in. Tunes from the Dave Holt Band, once a mainstay on Lancaster’s music scene, transported me to New Orleans. Ironically, this is the 10th anniversary of Hurricane Katrina.

Like many Lancastrians, Dave traveled to Louisiana to help with the cleanup. He made his first trip in the summer of 2006, working with Habitat for Humanity in St. Bernard Parish. Dave returned to the New Orleans area time and again for volunteer purposes and to attend music events. Locally, he and his band hosted a fundraising concert in the spring of 2007.

After returning from one of their trips to New Orleans, Dave and his wife, Dr. Sarah Holt, decided to move there. They put their Manheim Township home on the market and sold it in a matter of days.

Listening to Dave’s CD prompted me to google his name. Something called “NOLA Beaux Ties” popped up. It seems that in addition to construction work – he recently became a housing inspector – Dave has expanded his artistic and creative side by delving into fashion.

The idea for the bow (beaux) ties was inspired by a friend’s dog that is never without his bow tie. It just so happens that New Orleans men are also crazy for bow ties. Dave and the dog’s owner, Denise Osterbuhr, decided to start a business based on the fashion statement. Fortunately, Dave had an old Singer sewing machine stashed in his attic. To his relief, it worked perfectly.

It seems Dave is no stranger to the domestic side of life. As he told a reporter from NolaVie, he took home-economics classes in high school as a ploy to meet girls: Most of the time, he was the only male among 30 students. He says the repetition associated with cutting and sewing the ties, plus music playing in the background, lulls him into a Zen frame of mind.

As for fabric, the two scoured thrift stores and flea markets in search of designer shirts they could up-cycle. The only requirement was they needed to be 100% cotton. When demand overtook supply, Dave began buying fabric that matched the 100% cotton criteria. Buying fabric also allowed them to “tie” into trendy patterns and colors. Plans to create silk ties are on the drawing board.

The ties were an instant hit. They range from the South’s must-have fabric, seersucker, to elegant patterns (the fleur-de-lis in an array of colors) and color combos that pay tribute to Mardi Gras, the LSU Tigers and the New Orleans Saints. They also bear intriguing names such as Tiger Paws, Purple Rain, Mr. Green Greens, Pea Soup, Shades of Gray and Mardi Gras Beads. A line of holiday ties is also available. They’re popular on college campuses, which led to the creation of custom ties for fraternities and sororities. Professionals snap them up, as do the jeans-and-sneakers set. They’re also popular for weddings and other special occasions.

Several shops in New Orleans stock the ties, and Dave operates a pop-up shop at the Freret Street Market on the first Saturday of each month. The company also donates ties to charitable organizations for fundraising purposes. The enterprise has generated its share of press among magazines and newspapers in the region. 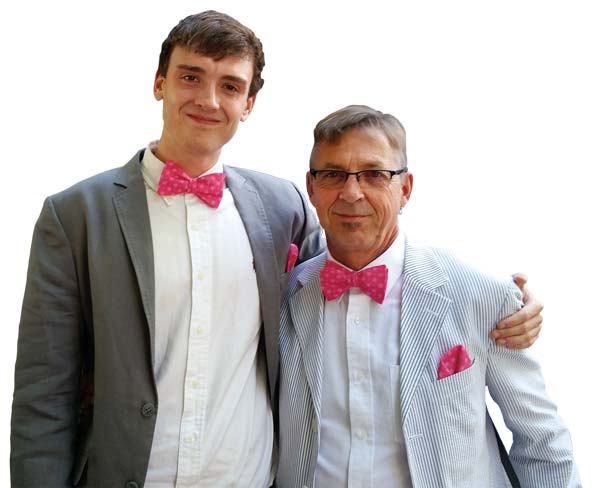 Dave Holt and his son, Mott, market NOLA Beaux Ties by wearing them!