Now that you know how to mulch, I thought it would be appropriate to follow it up with information about the dreaded and insidious artillery fungus and advice on selecting the best type of mulch for your gardens.

Help! Does my mulch have anything to do with the black spots all over my foundation?

Many gardeners are troubled by the so-called artillery fungus. “Troubled” hardly describes their frustration and dismay. The artillery fungus has become a bigger problem in the Northeast in recent years because of the wet springs we’ve experienced. Homeowners discover this pestilence when they notice tar-like black dots on their white foundation siding or light-colored car. These spots are the spores of this fungus; they colonize dead trees or other organic matter – such as wood mulch – and even appear on sheds and benches.  The dots might look like tiny bugs, but they cannot be easily washed off.

These black dots are caused by a fungus with the Latin name Sphaerobolus (Greek for “sphere thrower”). It lives on the wood mulch and causes it to decompose. One would think a fungus growing on mulch surface would be easy to deal with, but unfortunately this is not the case. The little fellow is hard to detect because it is only 1/10 of an inch (2.5 mm) in diameter and, with its orange-brown color, blends in with the color of most mulch.

This fungus has an interesting mechanism of dispersing its spores. There are tiny, dark-brown spore packets that sit on top of cup-shaped cells, which accumulate water. When enough liquid has accumulated, the cupped cells invert and burst, “shooting” the spores (scientifically called peridioles) up to 10 feet (both high and wide). The wind can even carry them up to the second story of a house. The spores then adhere to nearly any surface because of a sticky substance covering them. Thankfully, the spores are harmless to gardeners, plants and pets and do not structurally harm the surfaces to which they attach. Unfortunately, there is not a registered fungicide treatment for artillery fungus.

How does the artillery fungus get in the mulch?

The mulch could already be infested when it is delivered, or the spores could be on leaves of newly planted shrubs if the nursery was infected. Often the spores are transported from adjacent infested sources. There is even some evidence that it can be transmitted on the fur of animals and by birds.

The fungus thrives when the temperature reaches 70 degrees. When it drops down to the 50-degree range, the little cup-shaped fungus begins to produce its black spores and ejects them over a several-week period. Thus, it produces the spores in the spring and fall. The artillery fungus often grows best in mulch that’s located on the north side of the house, where it’s cool, shady and moist. A particularly insufferable characteristic is that the flying spores are attracted to any light object, i.e. your white siding or light-gray convertible. Imagine the aggravation of the car dealer who has dozens of cars covered with spores!

How can one remove the wretched spots?

Removing the spots is extremely difficult. A frustrated neighbor calls it the “blight of mankind.” One can only wish for the introduction of a surface treatment to protect facade surfaces. Sadly, there is no consistent advice on this. Scrubbing and scraping with tools or washing with soap and water helps somewhat, provided it is done when they first appear and have not dried and hardened. Consequently, it is the use of tools or harsh chemicals that often damages painted surfaces. Naturally, any attempts to remove with cleaners should be tested on an inconspicuous area.

Homeowners have reported little success with high-pressure sprayers, bristle brushes, pot scrubbers and strong cleaners. One power-washing company refused to take the caller’s money, saying the stain is virtually impossible to get off. One homeowner reported success with sponging – using Simple Green™ – and then using an ink eraser. Mr. Clean Magic Eraser™ has also been recommended. Some homeowners just resort to painting over the spore stains. While I can’t vouch for any of these “cures,” I can tell you to never allow the spores to drop back onto the foundation mulch where they will simply germinate and reinfest the area. If you elect to remove infected mulch, it is recommended that it be put in a biodegradable bag and taken to a landfill.

Insurance companies vary in their policies, but most homeowners who wish to replace siding that has been splattered by the artillery fungus find this damage is not covered. It is difficult to hold contractors responsible because the fungus can enter the chain of events at different places. Any success you have will likely depend on your lawyer.

Are there mulches that are less likely to harbor the fungus? How can I avoid this problem?

The bad news is that all mulches apparently support the artillery fungus after being outside for several years.

You can begin the battle by selecting a mulch that contains at least 85% bark. It is the cellulose in the wood component of mulches that is the primary food source for these fungi. The most resistant type of mulch is large pine bark nuggets. They should be from Pinus and have a particle size from 1/4 inch to 3 inches. Nuggets tend to stay hard and dry, not favorable conditions for the fungus, and last longer than any other organic mulch. Hardwood bark mulch is a better choice than wood mulch or mulch “blends.”  Hardwood bark mulch is derived from deciduous hardwood trees and should have a maximum wood content of no more than 15%. This will often be labeled “Premium” mulch. Various consistencies of mulch are often offered, depending whether the material has been single-, double- or triple-shredded. Naturally the finer type will degrade much quicker.

Researchers have learned that the commonly used mulch blends are the most likely to cause problems. This mulch consists of bark, wood and sometimes reprocessed wood products that have been shredded. If reprocessed wood products (actually demolition waste) are part of the blend, this should be reported on the mulch ingredient list.  Shredded skids are a poor material and add no nutrient value to the soil. Any mulch made from recycled wood should not include the widely-used “OSB” particle-board panels, which contain adhesives. Nor should they contain CCA- (Chromated Copper Arsenate) treated wood or wood that was stained or painted. Keep in mind, if the mulch price seems very low, there could be a reason.

Cypress bark mulch is considered resistant to artillery fungus. This mulch should be derived from Taxodium and have a maximum wood content of 15%. There have been reports that cocoa shell and licorice mulches do not shelter the fungus.

Colored mulches only slightly, and temporarily, inhibit the fungus. These mulches are made by dyeing the mulch in a water-based solution of colorant and chemical binder. The color stain is more water repellent and will remain dryer temporarily, but as the colors fade from rain and sunlight, the fungus will move in. Colored mulches containing mostly shredded skids will hold color longer because the wood was kiln-dried. You can easily tell if the colored mulch contains particle board because the dyes will not adhere to the particles.

By USDA regulation, mulch must be sold by the cubic-yard measurement (3ft x 3ft x 3ft), not by scoop or weight. Mulch products sold by the scoop often makes the price seem cheaper, but you don’t know how much you are getting. Scoops used by your supplier should be clearly marked from the factory by cubic yard. Mulch cannot be sold by weight because if there was a recent rain, you will get less.

Any mulch offered for sale should be heat treated to ensure that any weed seeds are killed and the artillery fungus will not be present in mulches that have been properly composted. I’m told the mulch piles should be 25-feet high and turned regularly to ensure internal heat that will sterilize the mulch. An added benefit is that termites cannot live through this process.

Some homeowners shred their own mulch from wood debris. Walnut wood should never be chipped for garden use because of its well-known allelopathic properties. (https://www.hort.purdue.edu/ext/HO-193.pdf)

Shredded and composted leaves break down quickly but are a great soil amendment.

Homeowners who put down a new top layer of mulch each year have a lower incidence of infestation. However, mulch should never be more than 3-5 inches deep. Too much mulch restricts air movement into the soil and results in water-logging during rain, which encourages root rot diseases and provides shelter for mice and voles. All types of mulch should be routinely disturbed to reduce the ability of invertebrates to become established. Termites, centipedes, earwigs and other pests nest in organic mulches that are typically placed near foundations, making their entry into the building convenient.

The highest invertebrate numbers are present in the blended mulches. All organic mulches should be kept at least 6 inches away from building foundations.
Probably the only reliable solution is to use a gravel mulch near your buildings. Or, plant a ground cover like ivy or pachysandra in place of mulch.

Help, there’s something oozing out of my mulch!

Some gardeners have noticed other eye-catching bright yellow or orange molds growing atop their mulch. These are masses of slime molds. They are unsightly but harmless. Just scoop them up and remove. 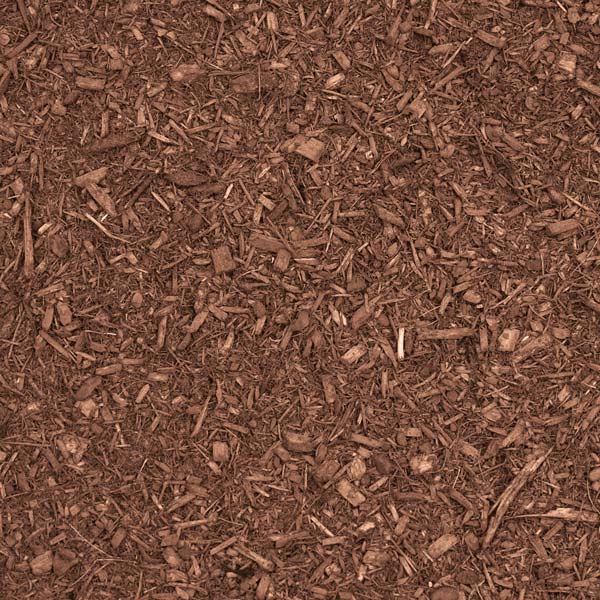