Whisk Café, which opened its doors in November, is owned by Elizabethtown native and restaurateur, Amy Kreamer. Located along a tree-lined drive at the edge of Masonic Village and across from the train station, the café makes its home in an iconic limestone building that once served as a garage. 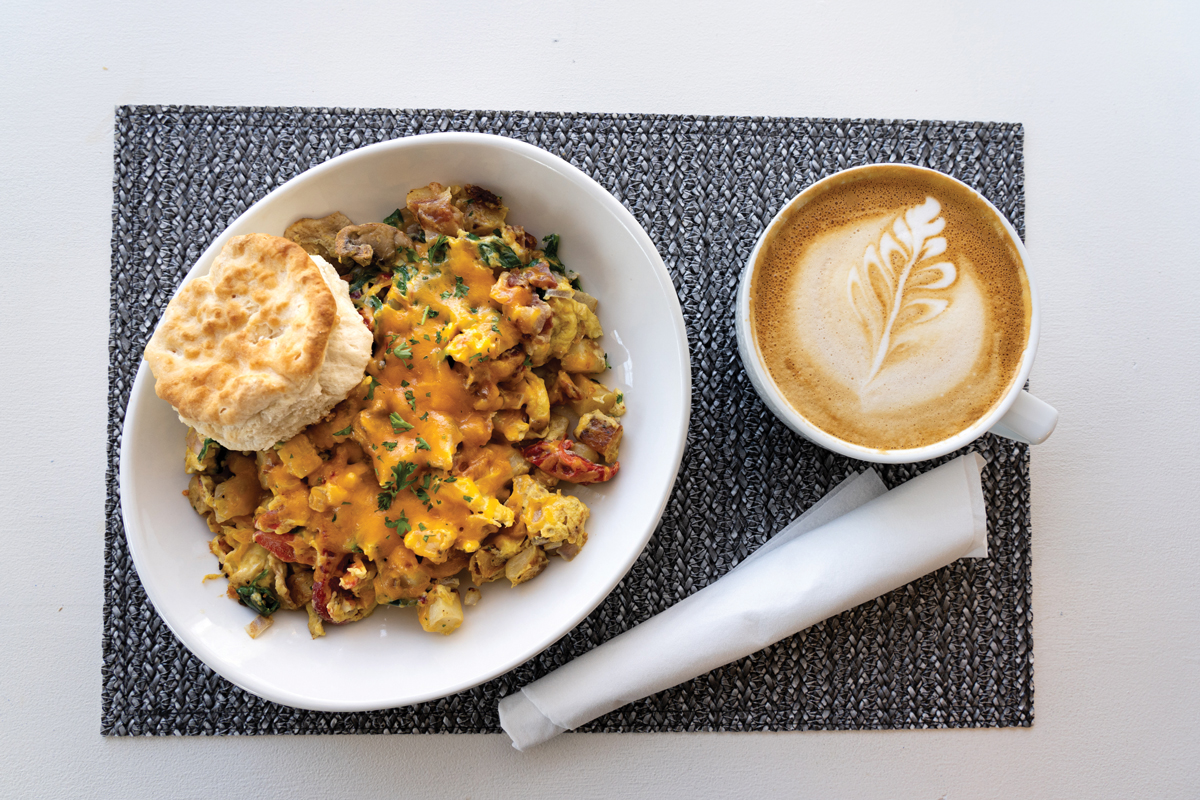 “We’re on Masonic Village’s campus, but we’re open to the public,” Amy explains. “Our customers are a mix of people from Masonic Village and friends and relatives visiting them, area residents, college students [from nearby Elizabethtown College] and people taking the train. We also have people who’ve come from Lancaster or Hershey to see what we’re all about.” 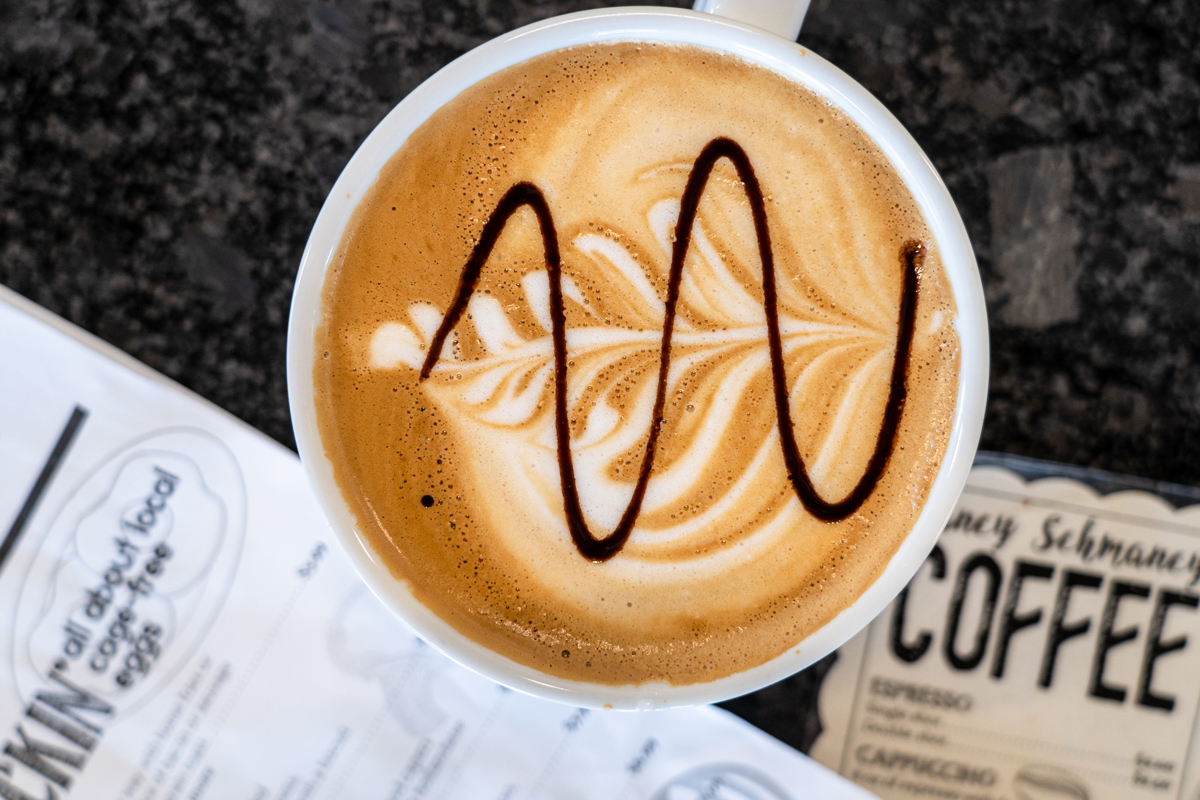 When the Elizabethtown Area Chamber of Commerce solicited ideas for the type of restaurant residents would like to see in the space, Amy took note of the suggestions and began to formulate a plan for a farm-to-table eatery that specializes in breakfast, brunch, lunch and coffee breaks. She was further inspired by her favorite restaurant in Hilton Head, South Carolina. “The idea is that people can come in for breakfast or lunch, or just sit and read a book and enjoy coffee,” she says.

As a partner in Lucky Ducks Bar and Grille, which has locations in Elizabethtown and Hershey, Amy is no stranger to the restaurant industry. “Lucky Ducks serves lunch and dinner, but I’ve always wanted to do something that offered breakfast,” she says. 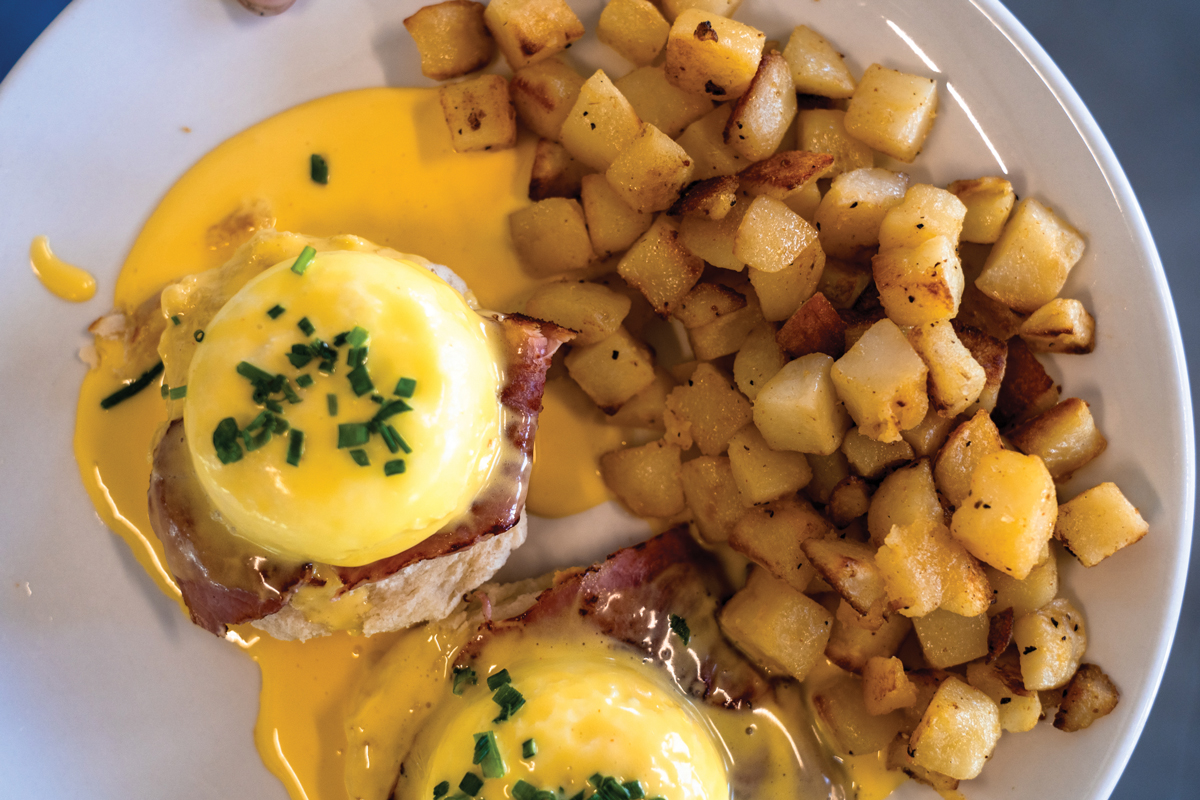 Having grown up in Elizabethtown, Whisk Café is dedicated to Amy’s late parents – Richard and Kay Kreamer. She fondly recalls going out to breakfast with her dad – one of the breakfast entrées, the RBK, is named after him. The apple sausage that’s served at the restaurant is based on her mother’s recipe and is made using sausage from Groff’s Meat.

Amy explains that the name Whisk Café was chosen since a “whisk is used in both cooking and baking – it blends things, so it’s a great play on words.” Plus, it makes for a great graphic and visual – whisks have been incorporated as lighting fixtures scattered throughout the café. 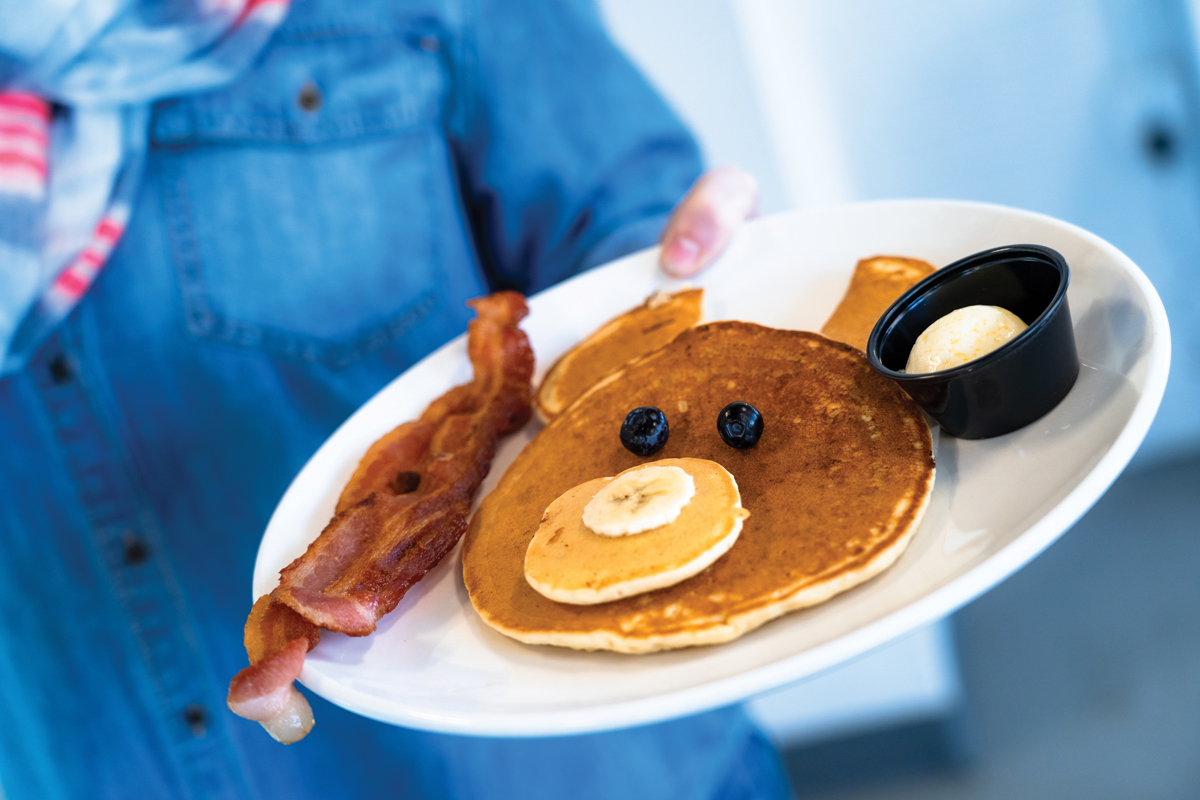 Pancakes are a specialty of the house.

The café has a light, airy feel thanks to high ceilings, a plethora of windows and walls that are painted a crisp white. A garage-type door can be rolled up in warm weather. Background music adds to the inviting atmosphere.

The café seats about 60, while an outdoor patio will seat about 40. There’s also a merchandise area filled with coffee-themed items. “I wanted the atmosphere to be bright, cheery and welcoming. It makes me happy to see people coming in and enjoying the atmosphere and food,” Amy says. 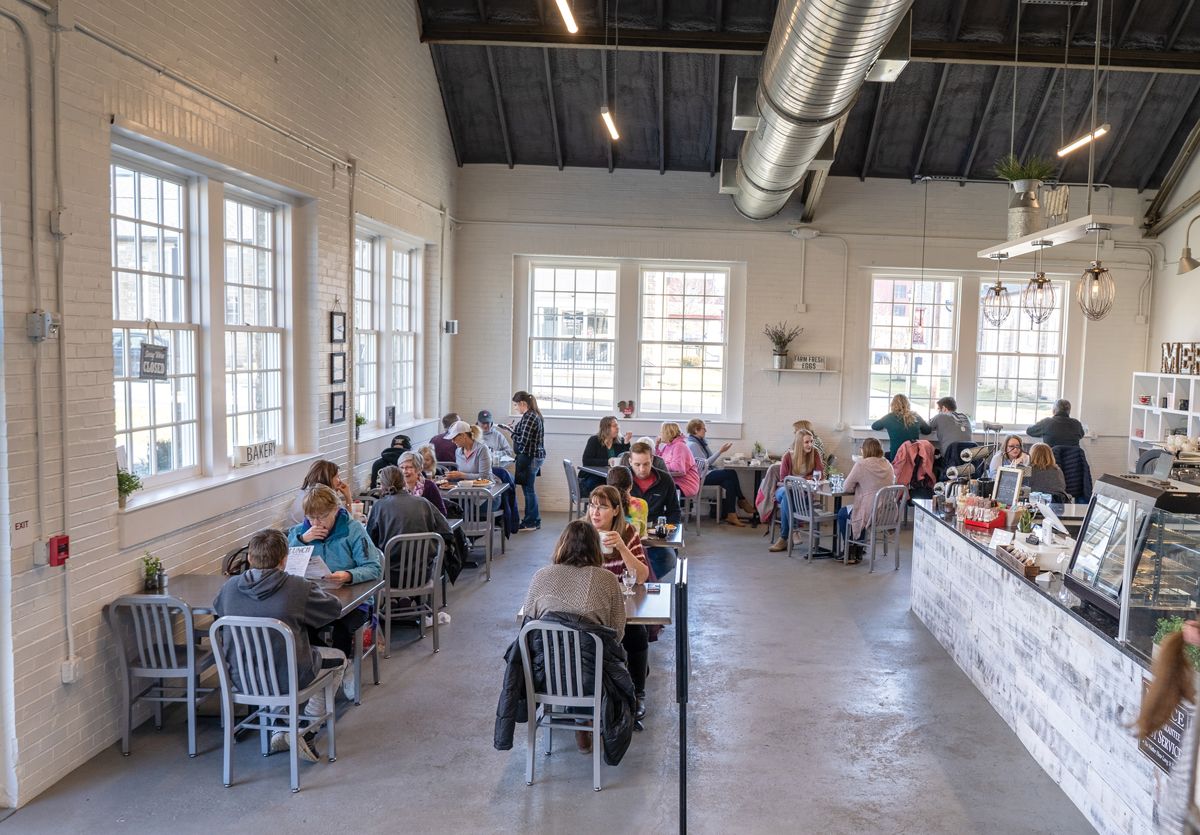 Whisk Café makes its home in a former garage that sits on the edge of Masonic Village’s campus in Elizabethtown.

The menu has a fresh and local focus. Ingredients include locally sourced cage-free eggs, meats from Groff’s in Elizabethtown and Kunzler & Company in Lancaster. Fruit and produce are sourced from the Masonic Village Farm Market whenever possible. “We have so much great stuff available right here, and we focus on that,” Amy says.

She adds that everything is made from scratch including biscuits, hash browns and hollandaise sauce for eggs benedict. Coffees and teas are from a purveyor in Floyd, Virginia – Red Rooster Coffee, Swallowtail Tea and J.T. Copper Syrups. “I searched to find just the right partners for coffees and teas. I’ve been to their facility, and they’ve been here to train our staff on how to make fantastic beverages,” she explains. (Smoothies and mocktails are also available.) 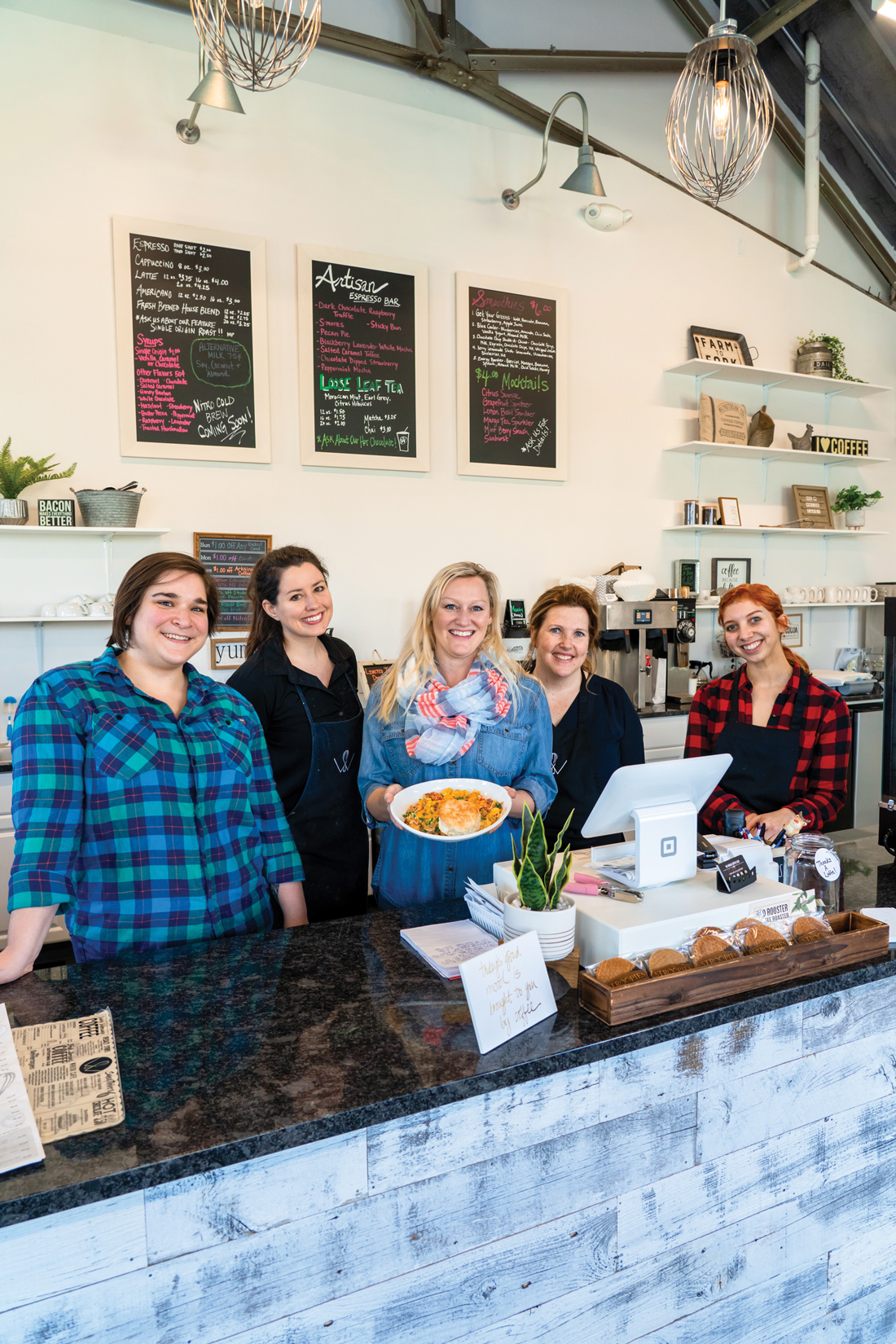 Menu items include vegetarian, vegan and gluten-free options. Breakfast offerings are available all-day and include Spicy Egg Tacos, Salmon Hash, Seasonal Baked Oatmeal, a variety of Breakwiches, an array of pancakes (including Savory Cheddar and Bacon and Bourbon Banana Foster), French toast (Blueberry Mascarpone is one), waffles and the list goes on.

Lunch items include sandwiches (Ham & Swiss, Poppyseed Chicken Salad and B-E-L-T are three), wraps, and a variety of salads that range from the classic Chef to the vegetarian/gluten-free Blueberry Avocado Quinoa Bowl. Omelets are also represented, including the Crabby Omelet and the Keto Omelet (three eggs, bacon, kale and Swiss cheese). 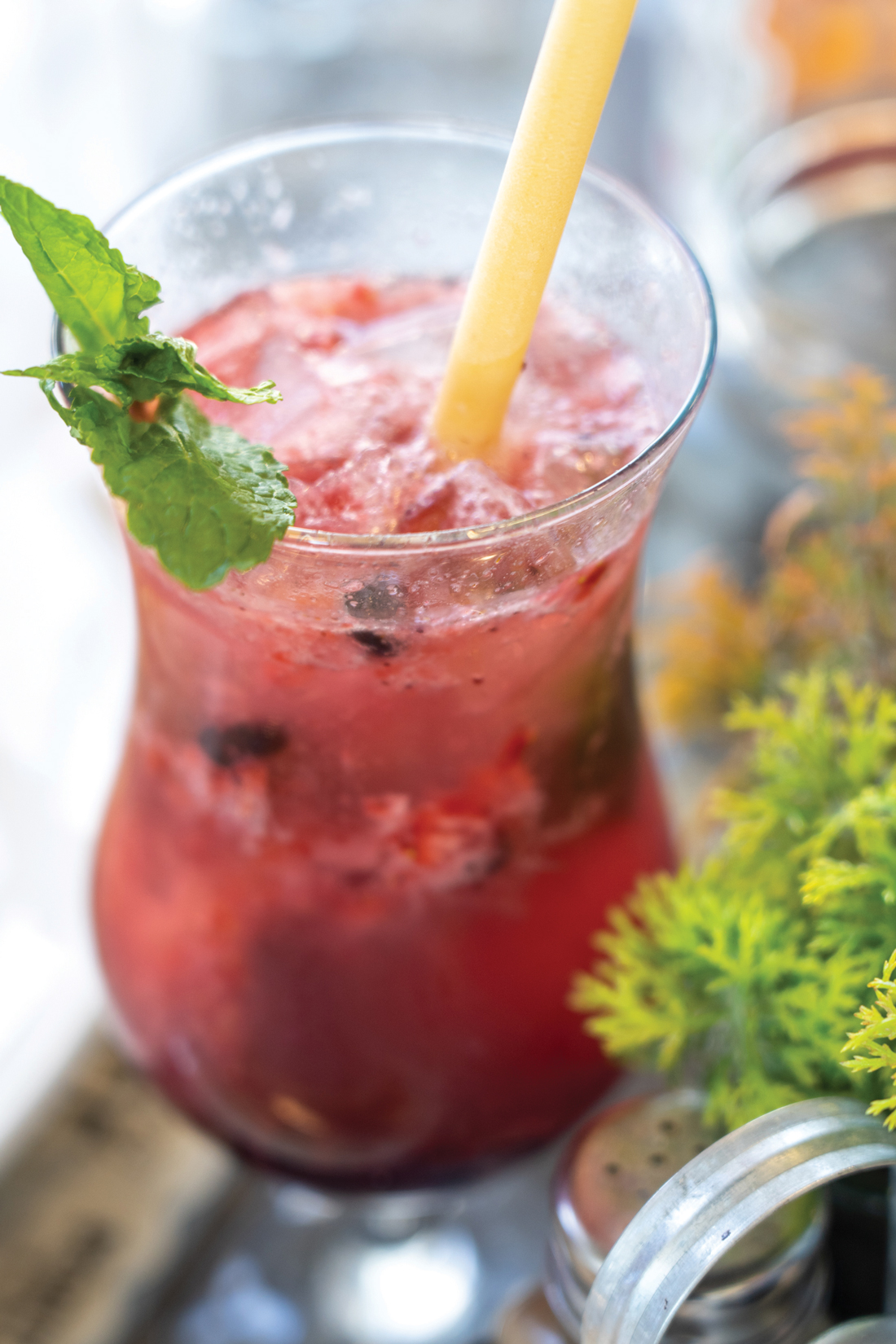 A mocktail – the perfect brunch beverage.

For those on the move, items are available as a quick to-go option. “We know that some of our guests stop in before they head to the train station to catch a train, so we want to make it easy and convenient for them,” Amy says.

Special menus will be available for holidays such as Mother’s Day. Amy says the patio will be “dog-friendly” and will even offer a special menu for pets that includes locally produced/homemade dog treats. 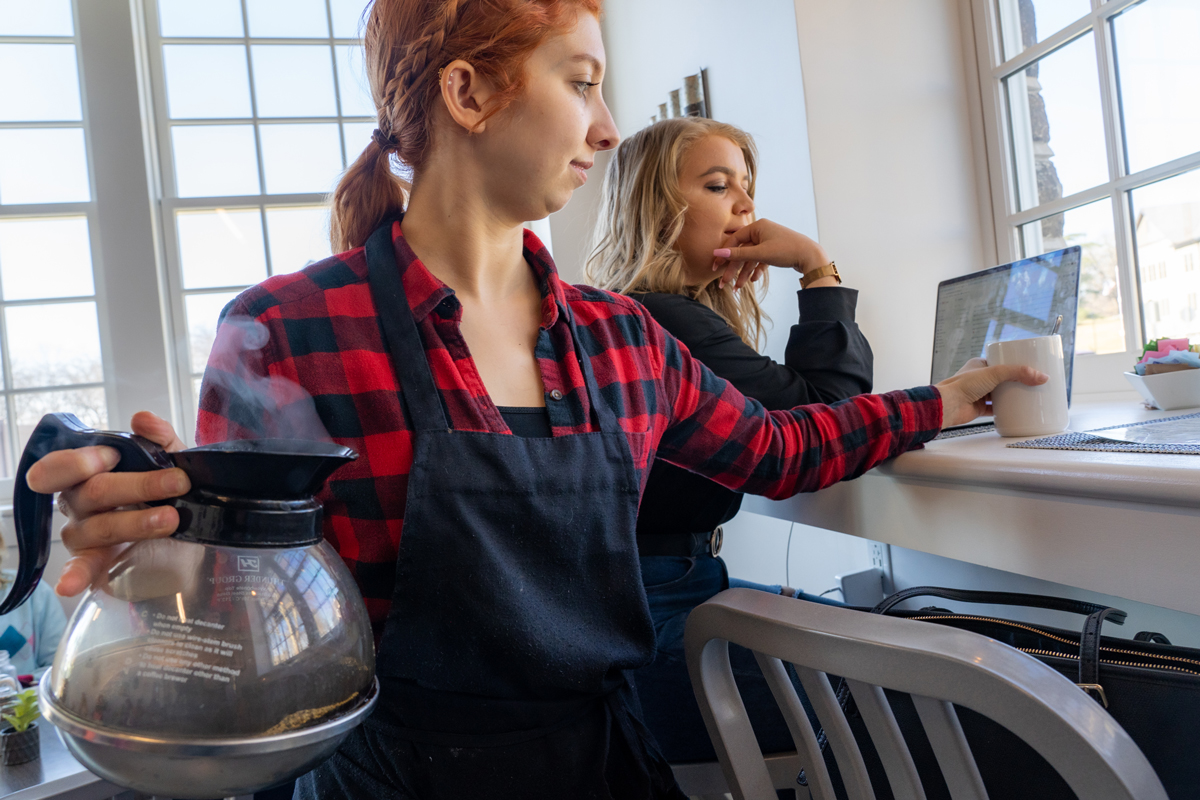 Whisk Café’s space is available to rent for private parties in the evening. Amy’s future plans also include hosting special evening events such as workshops, paint & sip nights and prix-fixe dinners (BYOB will be the policy for such events). Keep an eye on the café’s website and Facebook postings for further details. 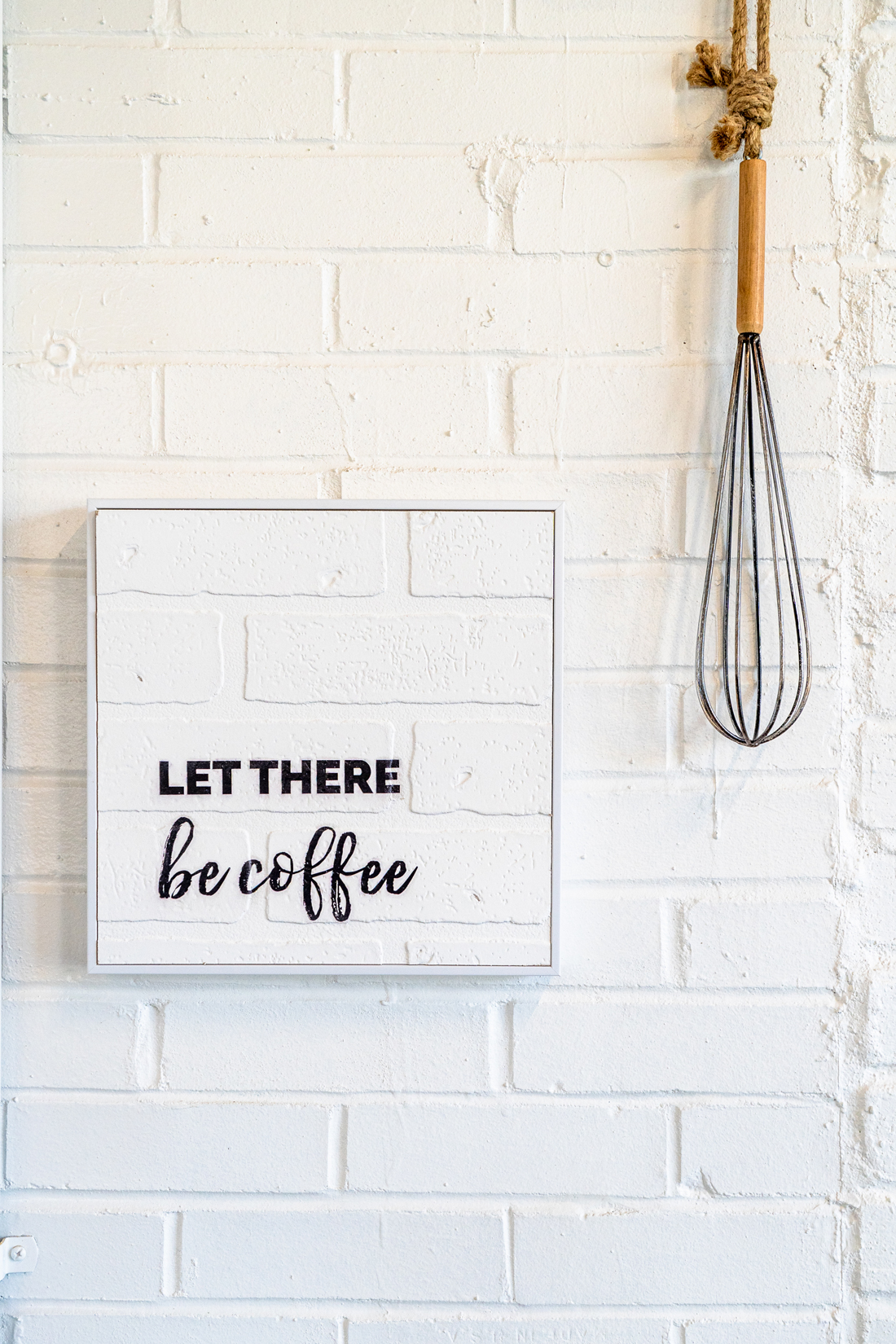 Pancakes are a specialty of the house.