On October 13, 2014, three guys and a lady got together in the dimly lit lower level of Thistle Finch Distillery in Lancaster. This actually marked the dawn of a new day in the history of Pennsylvania distilling. A whiskey was reincarnated. With a little help from friends, Bomberger’s Distillery – the entity once responsible for moving whiskey production from agricultural offshoot to entrepreneurial industry – regained its foothold in the annals of whiskey tradition.

Dick Stoll, once the master distiller of the celebrated Michter’s and A. H. Hirsch whiskies, stood over a barrel of premium bourbon. Husband-and-wife team Erik and Avianna Wolfe, along with Andrew Martin of Thistle Finch, stood closely by as the brown liquid flowed steadily into a stainless-steel vat; inside, batch No. 1 of Bomberger’s Distillery’s blend of American straight whiskies was mixing. The result, less than a year later, was a success … as many suspected.

The upstart company began as a means not only to resurrect a brand, but also to preserve a piece of history. The historical roots of Bomberger’s date back to 1753, when local farmers John and Michael Shenk began using their excess rye to make whiskey. The name of the distillery, eventually located just outside of Schaefferstown, dates to 1860, when Abraham Bomberger purchased the flourishing operation.

“Pennsylvania was rye whiskey,” says Dick, making an understatement as much as a point. The tradition is rich – especially with rye whiskey – and pre-dates the whiskey rebellion, which also helped create the eventual demise of Pennsylvania whiskey dominance. “Many of the distillers didn’t want to pay the tax, and they left Western Pennsylvania for Kentucky.”

His portrait isn’t plastered over the Internet (or on whiskey bottles like some old granddad), and he doesn’t have a Wikipedia page, but Dick Stoll is a living legend when it comes to whiskey – especially Pennsylvania whiskey. A bourbon drinker, Dick came home to Pennsylvania in 1954, after serving in the U.S. Navy as a combat air crewman and aviation structural mechanic, specializing in anti-submarine warfare. He returned home to find jobs scarce.

“I started as a ditch digger. Eventually I did any little job I could do,” he recalls. He ultimately landed a job at the distillery he was laying the foundation for, and soon was running the barrel gang – cutting the whiskey, filling the barrels and moving them to the warehouse. The distillery changed hands and was renamed Michter’s. A job with the maintenance crew provided him with employment for 20 years.

Over this time he became good friends with the distillery’s top man, Charles Everett Beam (of the renowned Beam family tree of whiskey producers), who made sure Dick learned every aspect of the facility, from sweeping the floors to choosing quality grain. When Beam suffered a heart attack and left the distillery, the company tapped Dick to take over as master distiller. This was 1972.

“I learned a lot from C. Everett Beam,” says Dick, which is surely an understatement. He only changed the yeast the distillery used; a specific strain of the alcohol-producing microrganisms owned and produced by the Beam family was subsequently no longer available to Michter’s. Whiskey rolled on – sometimes at paces quicker than others – until 1989. Michter’s shareholders took their name and moved production to Kentucky. The original distillery, which is located off Route 501, just over the Lebanon County line, fell into neglect. Most of the edifice is now gone.

“We are talking about the most award-winning bourbon in history, and it was distilled in Pennsylvania,” says Erik about the A. H. Hirsch whiskey. “Dick is the one person who is the link back to that production style. That knowledge has been an unbroken chain for hundreds of years, and our goal is to work with Dick to preserve that knowledge. He represents not just a place in whiskey making, but an era.”

The new era is an eventual functioning distillery and museum dedicated to Pennsylvania’s distilling history. While preserving his whiskey era, Dick looked first to create an aged and smooth blend for the new Bomberger’s product. What makes a good whiskey? “Good grain to start with and a little dedication from the person making it. That’s about it, basically,” says Dick.

Bomberger’s is now on the shelf, and a distinction has to be made between a whiskey blend and a blended whiskey. A whiskey blend like Bomberger’s is the carefully considered combination of a pair of aged whiskies. A blended whiskey – so commonly found on bar shelves around the world – is a mixture of mostly unaged whiskey and neutral grain spirits (purified ethanol). To create their whiskey blend, Dick  and Erik set out in 2014 to try a number of samples from distillers. They researched whiskey-makers big and small. The resulting blend is 89%, 2-year-old bourbon and 11%, 3-year-old rye.

“We went for a younger blend and worked toward a more upfront flavor. Just rye or just bourbon would never have this flavor. It is the blending that makes it unique,” says Erik. “There’s a big difference between a blended whiskey and blend of whiskey” and Bomberger’s is the latter, Dick points out.

Young bourbon has a tendency to be harsh, so the partners were eager to incorporate a straight rye whiskey to add more floral elements. The bourbon (which also includes rye, raising the total rye content in Bomberger’s to 41%) comes from a Midwest wholesale producer, while the straight rye whiskey is from a small distiller in the Finger Lakes region of New York.

“Whiskey blends were something more popular prior to Prohibition,” explains Erik. “There was enough whiskey out there; people would just buy whiskey and blend the stocks. Now, whiskey is so hard to come by, and not many people are blending it.”

Many regional craft distillers showed interest in helping Bomberger’s, but the boom in whiskey popularity – spurred by a spike in demand for classic cocktails and quality spirits  – quickly depleted availability. So, the group rested on Dick’s knowledge and experience.

“Walk first,” is the advice he gave to the fledgling distillery, which Dick, along with wife Elaine and the Wolfes (Erik is a Lititz native who worked in marketing in New York, while Avianna has a background in restaurants) are partners at Heritage Spirits – producers of Bomberger’s Whiskies. “I’m not computer literate. I know how to make whiskey the old-fashioned way. That’s all it is.”

“I don’t know many people who have this kind of work ethic at this age. I mean, you’ve forgotten more than most people know,” says Erik to Dick, who is lifting an almost-empty barrel of whiskey during the blending. Watching them interact, it appears they are more like lifelong friends than business partners. It’s at the point where Erik finishes Dick’s sentences, and Dick adds bits of historical fact to Erik’s orations.

Comfortable in the surroundings of a distillery, Dick seems at home near the stills. Things are smaller now. In the majority of public opinion, craft has taken over for quantity. Whiskey today is more scientific than in 1954 (let alone 1753). Evidently, Bomberger’s is trying to do things a little more old school.

“We are trying to do the right thing. It’s fairly commonplace now for a company to try and fit a square peg into a round hole to make a profit. We want to take the time to do it right,” says Erik. Right is right. The first two bottlings of Bomberger’s – 350 cases of 750 ml bottles of whiskey – went as fast as they could be filled. The group has their sights set on locations in Lititz to open their distillery (with many thanks to Martin and his Thistle Finch facility) in late summer or fall of 2015. Future plans call for making many things distilled by Heritage Spirits, but Dick wants any whiskey he has his hands on to be aged at least two years, preferably four – because there is a big difference between two and four he says. Either way, Bomberger’s Whiskies is officially back. It is back in Pennsylvania. That is huge for a state that once was known for its rye.

“The blend will stay for the foreseeable future,” says Avianna, who hints at an eventual all-rye whiskey and an apple jack in the distillery’s future. First things first: keep a quality product – and its history – alive. 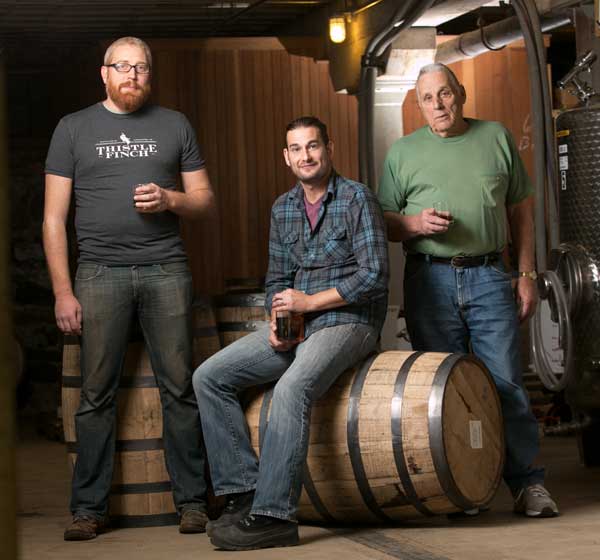 Andrew Martin (left) of Thistle Finch Distillery provided the facility and assistance to blend the initial offering from Bomberger’s Distillery. Revitalizing the historic brand is the vision of Erik Wolfe (center), Dick Stoll (right), and their wives, Avianna and Elaine (not pictured).