Weather has a decided impact on grapes. Poor weather early in the season can affect how the plants grow and ultimately impact the quality of the grapes. With the arrival of fall, vintners are praying for warm, sunny days and minimal rainfall during the weeks leading up to the harvest.

I used to work in minor league baseball. And, as I quickly discovered, one of the many “other duties as assigned” was pulling the dirty, smelly tarp onto the field when it rained. Many nights, my co-workers and I huddled around someone’s computer screen to watch the radar and cross our fingers that the forecast was wrong. As soon as the first raindrop fell, we were lacing up our “tarp shoes.” And, when the skies opened up and the umpire signaled for a halt in play, we were down on the field rolling out the tarp.

Never did I imagine that this piece of my resumé would give me something in common with Jan Waltz of Waltz Vineyards in Manheim.

Nope, not the shoes. But, the constant eye on the weather. Especially at harvest time.

I caught up with Jan in late September during his 20th harvest season. He had already harvested his white grapes and was preparing to do so with his reds. He says he’s given up on both long- and short-range weather forecasts, as they rarely pan out. At this time of the year, Jan is constantly thinking about the weather and checks it every two hours or so.

He says that while poor weather early in the season can affect how the plants grow, including the quantity of the grapes, it’s really the last two weeks before harvest that have the most impact.

He explains that red wine grapes – like merlot, cabernet sauvignon and cabernet franc – need as much time on the vine as possible to develop ripeness and flavor. But, the grapes become very fragile toward the end of the growing cycle and become susceptible to vintage spoilers like disease, predators and, of course, less-than-ideal weather.

He wants warm, sunny days with minimal rainfall leading up to harvest because heavy rains or cool temperatures can send the vine into a vegetative state and halt the ripening process. He says hot days and humidity can hurt the grapes almost as much as cold and rain because of the increased potential of disease.

And, all the work throughout the season – weeding, removing leaves, thinning the fruit and keeping predators away – can be undone by the weather if the winemaker doesn’t “pick” the right time to harvest the grapes.

“In the end, as a grower you can’t do much,” he says. “It’s set in stone. The only decision I have as a grower and winemaker is ‘when do I pick?’ Do I wait as long as I can? Or, do I pick before a period of rain and try to salvage the grapes and make a good wine?”

Denise Gardner, founder and wine consultant at Denise Gardner Winemaking and formerly an enologist at the Penn State Extension, sympathizes with growers around harvest time. “It’s such a dance,” she says. “The amount of pressure on growers and winemakers at the end of the year is phenomenal.”

She points out that wine grapes enjoy conditions opposite of most agricultural crops that need persistent rainfall. “The saying is ‘grapes don’t like wet feet,’” she says, explaining that grapevine roots like to be dry.

Denise says white wine grapes, like pinot grigio and sauvignon blanc, are much “safer” in Pennsylvania because of how early they ripen. The earlier in the season something can ripen, the more consistent the winery is in getting really good quality. But, she goes on to point out that good quality doesn’t necessarily equate to a varietal tasting exactly the same year after year. And year-to-year variation is one of the unique features of this area.

In 2011, it was back-to-back hurricanes (including Irene) that did the damage. “It seemed like every time we were ready to pick, we got more rain,” he says. “It was on par with 2010, but the last couple weeks of harvest completely crashed the vintage.”

Similarly, it was the last few weeks of 2012 that hurt the red harvest, though his white harvest came away unscathed. He says the 2012 wines were “nice” but didn’t have the last little bit of growth the grapes really needed.

He calls the 2013-2016 vintages “stellar,” and, though he says 2017 has been a “trying” year with many ups and downs weather-wise, he thinks the vintage has a lot of potential.

But, back to those weather forecasts and the burning question of when to pick.

While some winemakers rely on chemistry numbers to choose a harvest date, others use the visual and taste tests. He likes to combine both and determine the most limiting factor and how great the potential is for the berries to overcome that limitation. Sometimes he can wait to achieve that last thing the grapes need. But other times, the numbers tell him he can’t wait any longer.

Even though he did not make a varietal merlot or cabernet sauvignon in 2011, he did make some enjoyable wines, including his Baron Red blend and a new red blend called Barred Rock Red. “That was a year where some grape growers I would talk to said they hadn’t seen anything like that in 35 years,” he says. “Hopefully it goes another 35 years.” 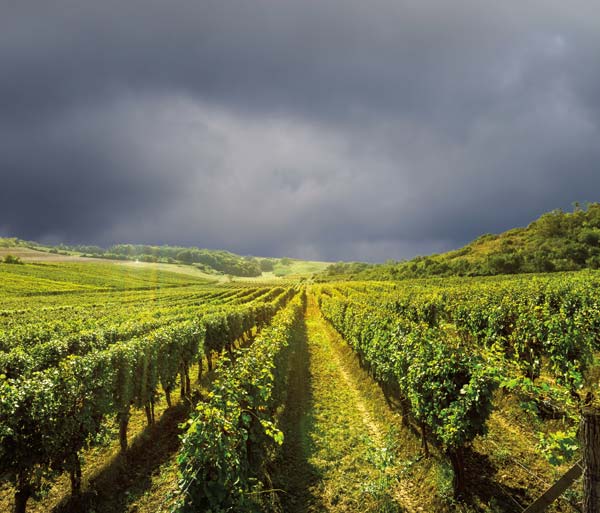