Let’s face it: Star power sells. From the George Foreman Grill to diapers from Jessica Alba’s Honest Company, celebrity products are nothing new. And, while our favorite famous faces have always been known for hawking fragrances and workout regimens, they’ve recently started ramping up appearances in the world of wine.

From Drew Barrymore to Mike Ditka, Fergie to Tom Seaver, not to mention many of the stars of the Real Housewives franchise, celebrities from every corner of the sports and entertainment world are getting into the wine biz. FYI: One of the first was the late Fess Parker of Davy Crockett fame.

But, in this highly competitive and oftentimes trend-averse industry, how do celebrity wines rate? I decided to taste-test four such wines that are widely available in Pennsylvania to see for myself if they are award-worthy or fall into the rotten grapes category.

Best known for his direction of The Godfather movies, Francis Ford Coppola became a winery owner when he bought more than 1,500 prime acres in the Napa Valley in 1976. With the assistance of skilled winemakers, Coppola has been consistently producing respectable vintages since the premiere of his Rubicon wine – a Bordeaux-style blend – in 1978.

The merlot I tried, with grapes blended from growers in three different wine regions of California, was smooth and round but decently balanced with soft tannins. It had nice dark fruit flavors including blueberry and plum on the palate with a touch of oak. Lacking the complexity and power you’d find in a true Bordeaux, it worked well on its own and also held up with Salisbury steak.

Coppola produces a variety of wines in the Diamond Collection and has several other labels including the Director’s series, Rosso and Bianco, Director’s Great Movies, Reserve and Storytellers, many of which are available in Pennsylvania.

In 2012, after renting Chateau Miraval for several years, Brad Pitt and Angelina Jolie purchased the 1,000+ acre property. The then-couple’s efforts in winemaking are (were?) a 50-50 partnership with the Perrin family, accomplished Rhone Valley vintners. (No public news yet on what will happen to Miraval in the divorce.) The first bottling of Rosé, in 2012, received an impressive 90-point rating from Wine Spectator, an indication that Miraval was destined for something beyond “celebrity wine” status.

Miraval takes its wine business seriously. A few years ago, the winery exhibited as part of the Harrisburg Wine Festival and, trying to be funny, I walked up to the gentleman pouring behind the table and said, “I was expecting to see Brad Pitt!” Though he poured my sample pleasantly enough, he also was quite clear that there’s more to the winery than just Brad Pitt.

Much like Brad and Angelina, the short, round Miraval bottle is stylish and unique, and the wine inside is delicious. Though I don’t believe the 2015 vintage – a blend of cinsault, grenache, rolle and syrah, made in the classic saignee method – is quite as exceptional as prior vintages I’ve tried, it’s still a light, flavorful rosé that’s begging to be sipped on an outdoor patio. Much like other whites and rosés, this one needs to be around 55 degrees (not straight from the refrigerator) to get the most out of it, from strawberry and flower aromas to a stiff acidity on the palate and a clean finish.

Miraval also produces two white wines: A rolle and a rolle/grenache blanc blend. The latter is available in Pennsylvania.

From musician Dave Matthews, leader of the Dave Matthews Band, comes The Dreaming Tree, a Sonoma County winery that focuses on approachable wines and sustainability. Interestingly, the bottles are 50% lighter than average, and the bottle labels are printed on recycled paper.

The Dreaming Tree debuted in 2011 with Matthews and winemaker Sean McKenzie at the helm, and this sauvignon blanc is the newest addition to the portfolio, having been released in May 2016. I found this off-dry wine light, bright and easy to drink but a bit one-note and lacking the signature flair of Matthews’ musical stylings. With citrus and tropical fruit flavors and a clean finish, I think this would make a nice summer porch wine, though, for the price, there may be better options. It paired nicely with a lemony chicken pasta dish.

My friend Tina, a Dave Matthews fan who prefers sweet wines, enjoyed this wine quite a bit, so I believe it could appeal to a diverse range of wine palates, which is always a plus.

Dreaming Tree also produces a chardonnay, a cabernet sauvignon, a red blend (Crush), a white blend (Everyday) and a pinot noir, all of which are available in Pennsylvania.

You’ll recognize Kevin O’Leary, aka Mr. Wonderful, as the “mean” shark on ABC’s Shark Tank, where he routinely touts himself as a wine connoisseur and savvy player in the beverage industry. So, when I saw his self-branded wine at the store, I figured it should be one of the best bottles I’ve ever bought for under $15.

Instead, I’d say it was typical mass-produced California cabernet and that it would not be my pick for a smart buy in the varietal. Jammy with some new oak and light tannin, it was pleasant but not exceptional. My husband and I shared this bottle with our friend Judah, who – like Mr. O’Leary – likes a big red wine as much as he likes capitalism. In the end, “This is a nice cabernet,” was about the best we could say for it, though it did pair well with spaghetti and meatballs.

The O’Leary Fine Wines website does not reveal much about where the grapes come from or who actually makes the wine, but it is bottled in California’s Russian River Valley.

O’Leary Wines also offers a reserve cabernet and both a chardonnay and a reserve chardonnay. (Neither reserve is available in Pennsylvania).

And the Aurand Awards go to …

Overall, I was pleasantly surprised. Judging by my albeit-narrow taste test, I’d give the awards to those in cinema – Jolie-Pitt and Coppola. Going forward, I think I’ll rely on “The Best of What’s Around” reviews rather than blindly buy celeb wines.

While the aforementioned bottles are affordably priced, some celebrity wines retail for much more. Sting’s Sister Moon (palagioproducts.com), a red Tuscan blend, is $53 and is available by special order in PA. Basketball star Yao Ming’s Napa cabernet sauvignon (yaofamilywines.com) is currently $67.99 in the state’s Chairman’s Selection discount program, but some Ming wines are sold for more than $100. 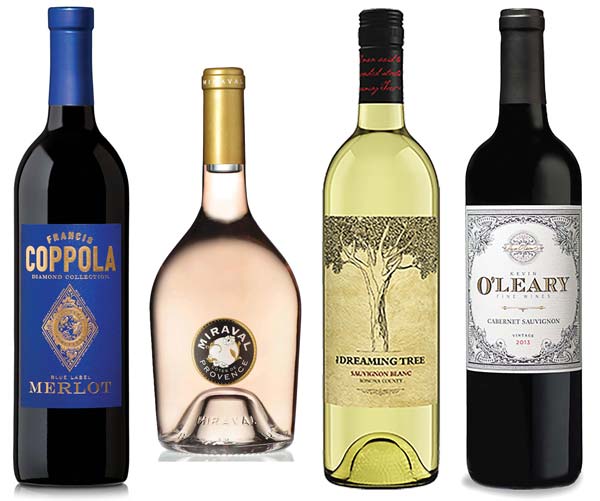