Newly engaged Elizabeth Martin and Geoff Payne made their engagement party unique by choosing a theme that is reflective of one of their shared passions – traveling the world.

The recipe for a successful engagement party: take two people in love, gently fold in their nearest and dearest friends and family, and mix well for two hours. The engagement party is a lovely tradition that officially announces the newly engaged couple and brings each one’s family and close friends together, some perhaps for the first time.
Liz, who is a Lancaster Country Day alumna, was dressed as a sailor when her future took a big turn. It was Halloween 2010, and she was celebrating at a downtown Lancaster watering hole. A box of ramen noodles caught her eye – Geoff’s clever costume – and they were introduced by a mutual friend. A few weeks later, another chance meeting at December’s First Friday sparked the start of their romantic relationship.

Through Liz’s career as a senior analyst at her father’s consulting firm and Geoff’s work as a manufacturer’s representative in the RV industry, business-related travel to major commerce centers throughout the world was something they had in common – and enjoyed. “Seeing new cities, trying new restaurants, experiencing the cultures of the various destinations” were passions they discovered they both shared, says Liz.

And then there’s Beaver Creek, Colorado. The resort is a second home for Liz, who has enjoyed years of ski vacations there with her parents. She was excited to share Beaver Creek with Geoff as their first trip together.

London, San Francisco, Quebec, Las Vegas … the list goes on, and during one evening in Boston, the deal was sealed. A proposal over Liz’s favorite dessert, peppermint ice cream, made “Mr. & Mrs.” a definite stop on the itinerary.

When the bride-to-be’s parents, John and Ann Martin, got wind of the engagement, they were certain they wanted to announce their only child’s intentions with a party. “While we have traveled a lot together in the past few years, we look at our engagement as the beginning of a whole new ‘journey,’” Liz notes. It was only natural that their party’s theme became “Let the Journey Begin.”

The celebration took place last November in a rustic barn-turned-event venue, The Farm at Eagles Ridge, located just south of Lancaster City. The historic 1820s barn has been renovated by Stuart and Cynthia Herr, who purchased the 150-acre property in 1999. It was previously owned by the Shenk family, and Hannah Shenk was one of Liz’s best friends. “I have so many memories,” from visiting this farm, Liz reflects, “such as being herded by Hannah’s border collies, checking on the chickens, hanging out with the fainting goats, being chased by emus and swimming in the pond.” What better site to celebrate the bride-to-be’s next life chapter?

The expansive plank walls of the venue’s renovated barn were transformed into an art gallery for the party, documenting the couple’s travels with large photographs of Liz and Geoff enjoying their trips – biking, skiing and soaking up the glamour and good life of their favorite destinations.

Food stations were themed by the various destinations of the couple’s travels, with menu items reflecting the specialties of their visited cities. San Francisco’s sourdough bread and a Chinatown-inspired Asian salad tempted the 90 guests, alongside classic London Pub fare of Fish and Chips, Colorado beef sirloin, and a lavish Las Vegas-style spread of sushi and California rolls. And remember that proposal made over peppermint ice cream? Liz’s favorite dessert made an encore with chocolate straw garnish and chocolate ganache squares.

One of the next stops on Liz and Geoff’s itinerary is an October 2015 wedding, no doubt preceded by a bit of jet setting between now and then. “It’s amazing to see how much we learn on each trip and how we’ve grown as a couple because of these trips,” Liz remarks. “While we both were comfortable traveling on our own, we’ve developed into great traveling companions.” An excellent basis for a lifetime of exploring the world together. 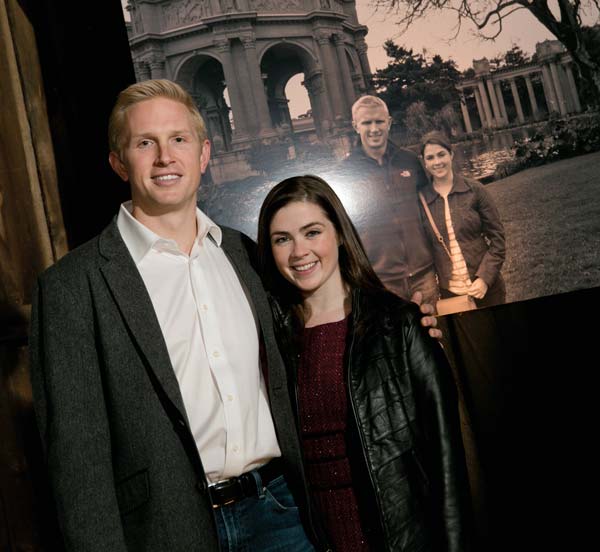 Super-sized photo graphics served as a backdrop gallery of the couple’s travel adventures.