August 15, 1945, is known to the world as V-J Day or Victory over Japan. But September 2, 1945, which is regarded as the “other V-J Day,” is the date that’s etched into the memory of Quarryville native Karl Brubaker. Karl, a young Seabee at that time, was fortunate to be one of the servicemen chosen to be aboard the battleship USS Missouri for the signing of the Japanese Instrument of Surrender that officially ended World War II. This year marks the 70th anniversary of that momentous event.

On August 15, 1945, Emperor Hirohito addressed his countrymen over the radio, announcing the surrender of Japan. As news reached America, elation quickly spread. In the middle of Times Square in New York, a uniformed nurse was being enthusiastically kissed by a jubilant young US sailor. Famed photographer Alfred Eisenstaedt aimed his camera and snapped a picture immortalizing the moment that has simply become known as “The Kiss.” The photo became almost as famous as the surrender itself. 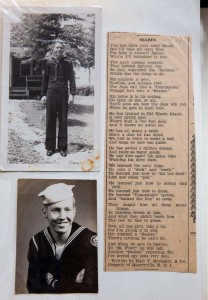 Karl is pictured as a young Seabee. Shown is the poem he wrote that detailed his service.

On the other side of the world, another young sailor, who was stationed in the waters off Japan, was readying himself to witness history from a different angle. Karl Brubaker was making preparations to board the USS Missouri, which was afloat in Tokyo Bay, and attend the official signing of the soon-to-be-historic Instrument of Surrender. The now-88-year-old Karl remembers that historic day like it was yesterday.

In 1945, at age 18 and fresh out of high school, Karl enlisted in the US Navy. As a member of the US Navy Construction Battalion, he was stationed in nearby Guam when the atomic bombs were dropped on Hiroshima (August 6) and Nagasaki (August 9). It was General Douglas MacArthur’s desire to have servicemen from each branch of the military aboard the Missouri to witness the signing and to provide a show of military strength to the Japanese.
Karl was among the servicemen to be invited to attend the ceremony. He spent the next few days putting together a presentable uniform (his dress uniform, which was folded away in his sea-bag, needed a good pressing). When September 2 arrived, he was ready. 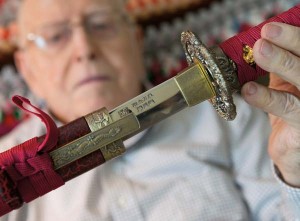 Karl holds a sword he acquired in Japan.

To his surprise, once aboard the Missouri he was able to position himself less than 40 feet away from where the Japanese officials would be signing the document that would end WWII. He also recalls standing next to a gun carriage with a Life magazine photographer snapping pictures close by.

Fortunately, Karl was able to bring along his own Brownie camera and photograph the proceedings. His pictures stand as a testament to history and are carefully preserved, allowing visitors to his home at Quarryville Presbyterian Retirement Community to share in the historic moment.

“This was not a day to just sit back and relax though,” Karl recounts. There was serious apprehension that the Japanese might try to eliminate all the officers and servicemen aboard the ship. To guard against such a maneuver, US fighter planes circled overhead, while a vast number of American warships, destroyers and aircraft carriers patrolled the waters of Tokyo Bay.  “All of the Fifth Fleet was there,” he recalls.

Contrary to popular belief, Emperor Hirohito was not present for the signing. Instead, the Japanese government sent Foreign Minister Mamoru Shigemitsu and General Yoshijiro Umezu, Chief of the Army General Staff.
Following the surrender, Karl remained in Japan with the occupation forces. “We were supposed to make peace and mingle with the Japanese people,” he explains. Baseball helped to bridge the gap, as someone suggested they round up some balls, bats and gloves and encourage the Japanese kids to play the game. “The kids had the time of their lives playing,” Karl remembers. Mingling with the locals provided the servicemen with an opportunity to make friends; many were invited into Japanese homes for tea. Karl also collected a great deal of Japanese memorabilia along the way, much of which he still possesses. 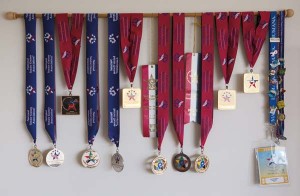 Karl’s wife, Jean, who is a retired physical education teacher, devotes her free time to competing in senior-level athletic events. Jean’s many awards and mementos of her travels are displayed in the Brubaker’s home.

Two years, one month and 28 days after enlisting, Karl returned home and became an electrician, owning and operating Brubaker Electric until he retired in 1995. He also reconnected with an old friend from childhood, Jean Booth. They have been married for 67 years and are the parents of three daughters and one son. The family has grown to include eight grandsons, 10 great-grandsons, one great-granddaughter and three great-great-grandsons.
Jean, a retired physical education teacher (having taught in the Oxford School District for 25 years), stays active by competing in senior-level games and Olympics, with javelin, shot put and the baseball throw being her areas of expertise. She was AARP’s “Athlete of the Year” in 2004. 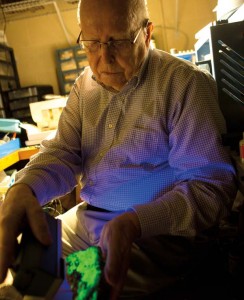 An avid rock collector, Karl spends his free time in a shop where he uses machines and hand tools to cut, sand and polish his stones for display purposes or for jewelry applications.

Karl busies himself with his various collections. Most impressive is his rock and stone collection; he’s an avid collector of geodes (nodules and vugs) and carefully catalogs what he finds. He also enjoys making jewelry from his many precious finds, with opal being his favorite. He employs various machines and hand tools to cut, sand and polish his stones in preparation for display, or he has them formed into cabochons for jewelry-making purposes.
Karl’s interest in rock collecting began when his son Brian was in high school, and the two of them would go out into the field searching for rocks. The hobby ultimately served as great preparation for Brian, who later received a mining engineering degree from Lafayette College. In 1974 they discovered an unusual find: a Huntite – a carbonate mineral that was discovered in Nevada in 1917 but was misidentified until the early 50s. It is not usually found in this part of the country, but the Brubakers discovered it in nearby Cedar Hill Quarry. They later donated this important find to Lafayette College. 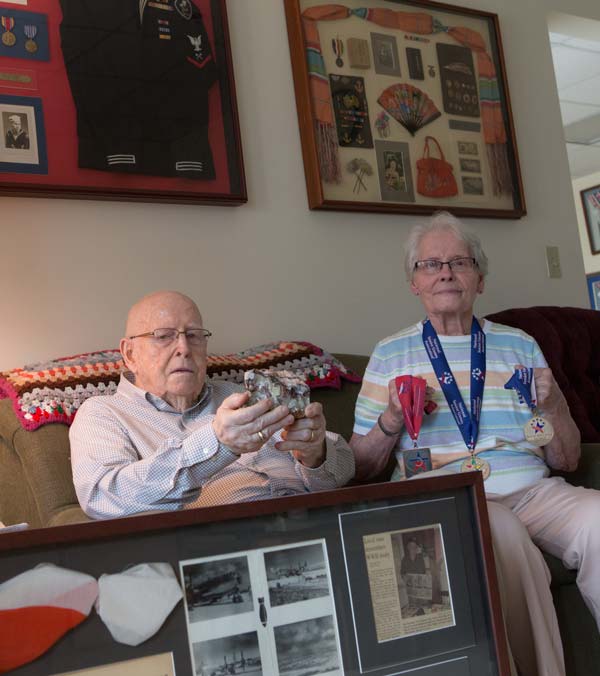 Karl Brubaker (pictured with his wife Jean) was aboard the USS Missouri on September 2, 1945, to witness the signing of the Japanese Instrument of Surrender. He had his trusty Brownie camera along and was able to take photos of the day’s events that officially ended World War II. Those photos, along with memorabilia of his time serving in the Pacific, decorate his home at Quarryville Presbyterian Retirement Community.