I hope you, your family and friends are in good health. Undoubtedly, the coronavirus and its fallout are presenting the most daunting challenges any of us have ever faced. But, like the other wars and catastrophes this country has dealt with, we will somehow overcome it – after all, it’s the American way.

Despite dealing with the feeling of being frozen in time, the world moves forward. Fortunately, our parent company, Engle Printing & Publishing, has been able to remain in operation. Employees were given the option of working from home or coming to the office. I am one of a handful still in the office. As I explained to my sister, I am a freak of nature – I’ve never ordered anything from Amazon, I’ve never seen a Star Wars movie, I don’t drink coffee and I don’t have a computer or an internet connection at home.

I’m fine with coming to the office. Social distancing-wise, there isn’t a person within 300 feet of me. I leave my house, drive to work, enter the building, stay put and do the reverse at the end of the day.

With everyone else working from home, this issue of the magazine was planned, written, edited, proofread and designed via cyberspace and Zoom. Fortunately, because May is always our garden issue, the photography for the features was completed last summer. (It’s timely, because I have a feeling a lot of us will be summering in our backyards.) Jordan Bush also photographed his column last summer. Nick Gould photographed Cocina Mexicana a few hours before Governor Wolf issued his stay-at-home order.

Despite a world in upheaval, human nature has managed to prevail. We Americans are a nosy bunch and the coronavirus could not quell that trait. Like millions of other viewers, I instantly became infatuated with the concept of television anchors and reporters delivering the news from their homes. Viewers have been privy to everything from home libraries, kitchens and man caves to guest rooms, offices and basements. Apparently, the location is determined by the area of the house where Wi-Fi reception is the strongest.

The anchors/reporters are winging it and are in charge of everything from lighting and sound to doing their own hair/makeup, which explains why some appear to be in a dimly lit bar or broadcasting from the bottom of a tin can. Poor Judge Jeanine Pirro (Fox News) had crazy hair one Saturday night and social media lit up about her “drunk hair.” In all fairness, she blamed it on a sound wire that got caught in her hair and made a chunk of it stick out. She also took to social media to say she does not drink.

Reporting from home started with the Today show’s Al Roker and Craig Melvin, who were homebound because of being exposed to a co-worker who was diagnosed with coronavirus.

Melvin’s first appearance set social media atwitter because of the tropical wallpaper that served as his backdrop. Viewers either loved or hated it – there was no middle ground. Reporters from The Washington Post identified the pattern as being Palm Tree from Serena & Lily. It retails for $98 a roll. (I was compelled to check it out, so of course, now my Facebook feed is flooded with sponsored posts from the company.) The wallpaper caused such a hubbub that Melvin soon repositioned himself in his basement, where a Joanna Gaines-inspired shiplap wall provided a nondescript backdrop.

Al Roker began delivering the weather report from his kitchen but then moved to what appears to be his dining room, where you get to see a wall covered in what looks like silk wallpaper. Depending on where he is seated, you can sometimes see into a sitting room that has a really beautiful fireplace.

Over on ABC, Robin Roberts, who has battled her own health issues, has been anchoring Good Morning America from her basement, which she shared is her go-to place to watch televised sporting events. She appears to be seated at a desk with a credenza behind it that is always topped with a bouquet of flowers and family photos. In early April, she admitted part of the credenza is actually a “wine cooler” and could not believe viewers noticed that fact. 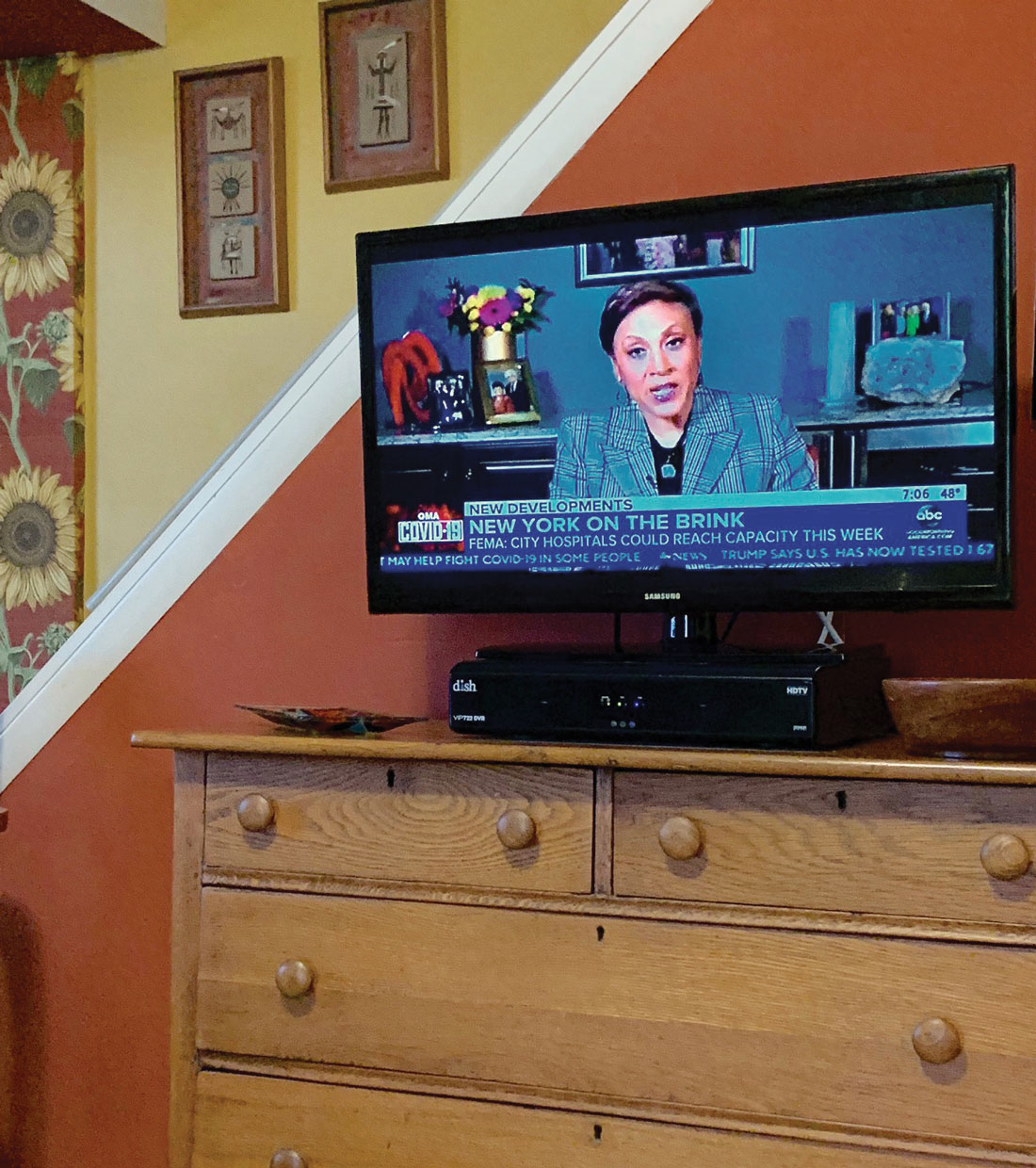 Roberts’ co-anchor, George Stephanopoulos, has also been working from home – his “set” is a replica of the Times Square studio. But, we did get to see a bedroom, too – his wife, Ali Wentworth, was quarantined there due to her coronavirus diagnosis and filmed an update on her condition from her comfy bed. Meanwhile, the show’s Lara Spencer has been doing cooking demos from her kitchen.

One night on CNN, Anderson Cooper treated viewers to a view of the library in his West Village home that features walls of bookcases, a leather wingback chair and a fab chandelier. It was very Ralph Lauren!

Speaking of CNN, who knew that the Cuomo brothers – Anchor Chris and Governor Andy – would become the hit reality show of the coronavirus era. On Monday nights, viewers have had front-row seats to bantering that ranges from brotherly love to sibling rivalry. My radar went up on March 30, when Chris was suddenly anchoring his show from his basement, which prompted some jabs from his brother.

The next morning, it was disclosed Chris had been diagnosed with the virus, which made for dramatic television that night. There was Chris – now quarantined to a very beige basement with a dimly lit staircase leading to seemingly nowhere looming in the background – ever at the ready at 9 p.m. “Even the dogs don’t come down here,” he lamented. Apparently CNN made some lighting changes – the following night, the basement (including the staircase) looked less ominous.

Local anchors and newscasters have also been working from home. WGAL’s Kim Lemon appears to be anchoring from a home office. Behind her you can see books and family photos. There’s always a vase of flowers, too.

Local meteorologists, including Tom Russell (and his cute dog) and Steve Knight (WHP), Dan Tomaso (ABC27) and Joe Calhoun (WGAL) have also been delivering their portions of the newscasts from their homes. On the first night Tomaso telecasted from his living room, his newsroom cohorts seemed amazed by his surroundings. “That’s your house?” one asked. “That is a beautiful room,” said another as she took in the champagne-hued surroundings.

See, even members of the media are intrigued.